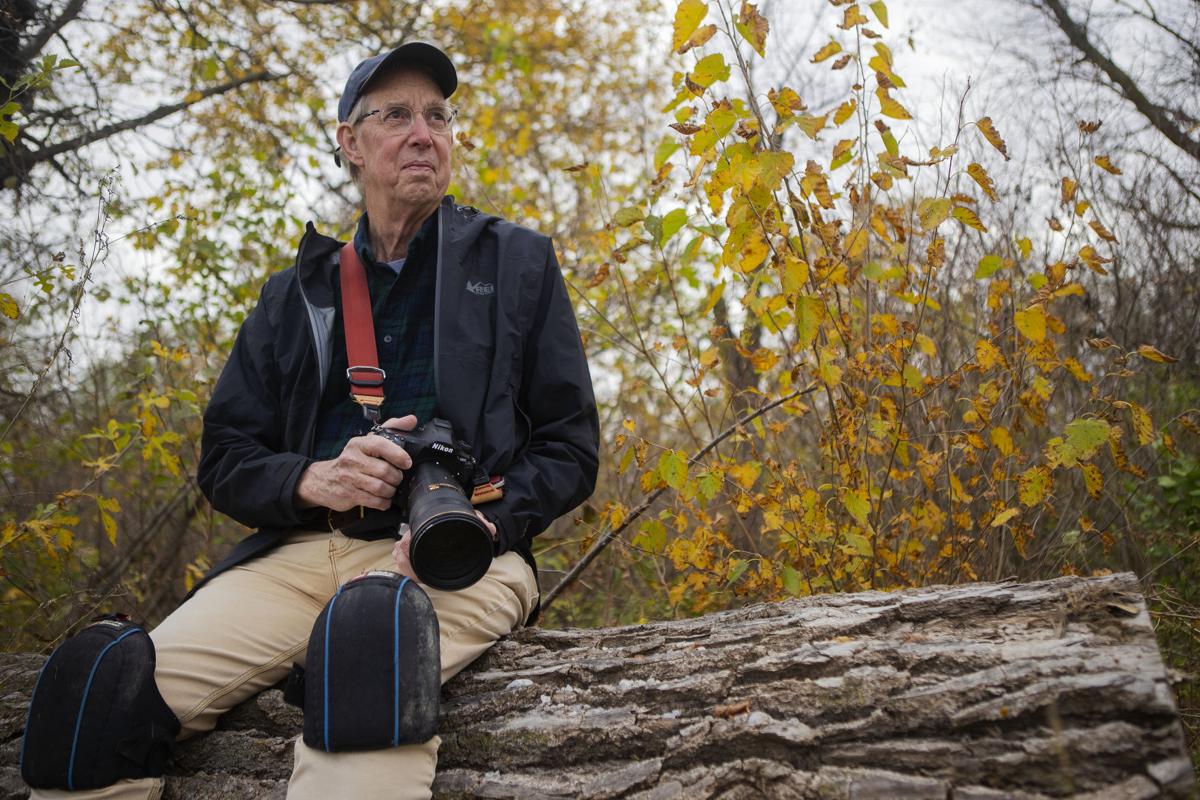 Tom White, a former newspaperman and editor of the Lincoln Star from 1982-1994, has become an accomplished bird photographer in his retirement. Here he's shown at Conestoga Lake near Denton, which is one of his favorite places to take photos. 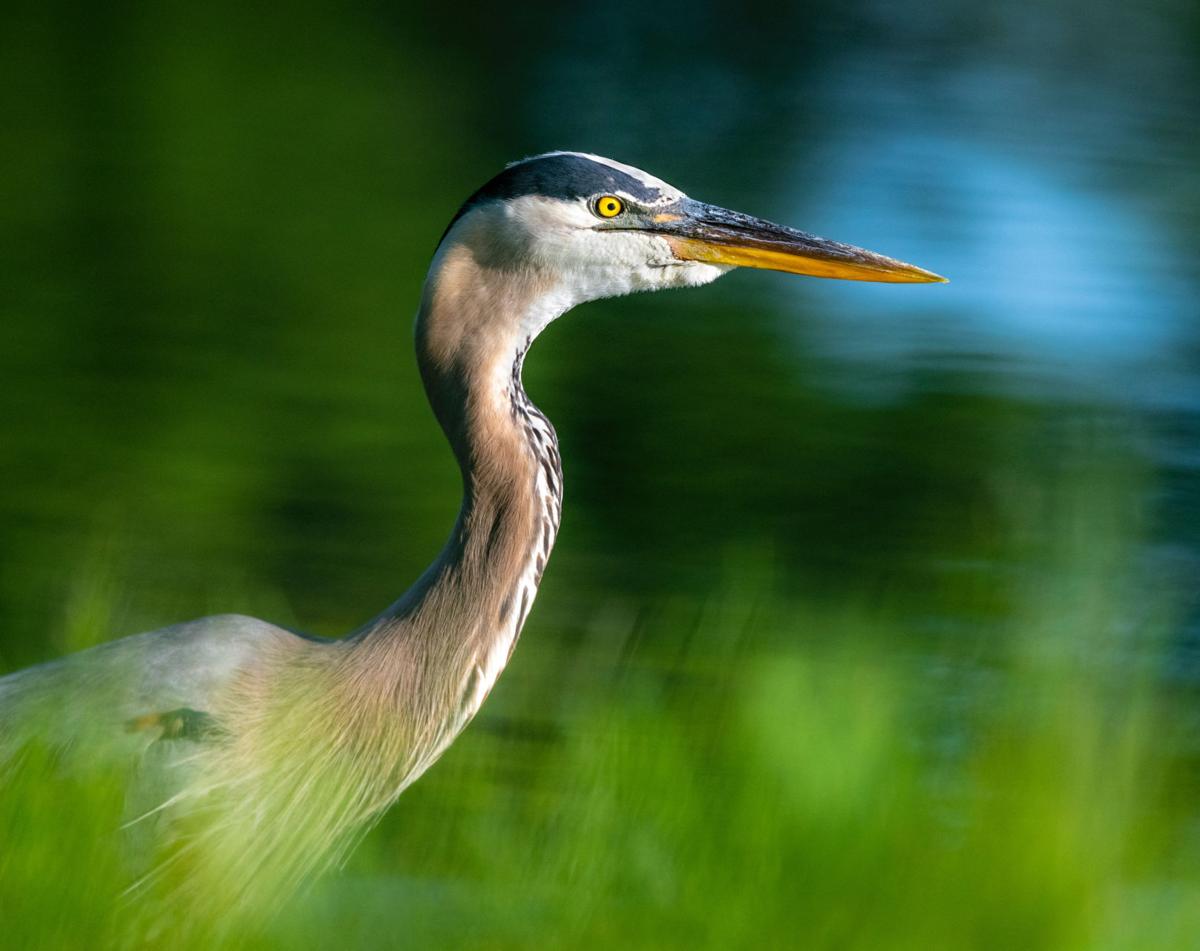 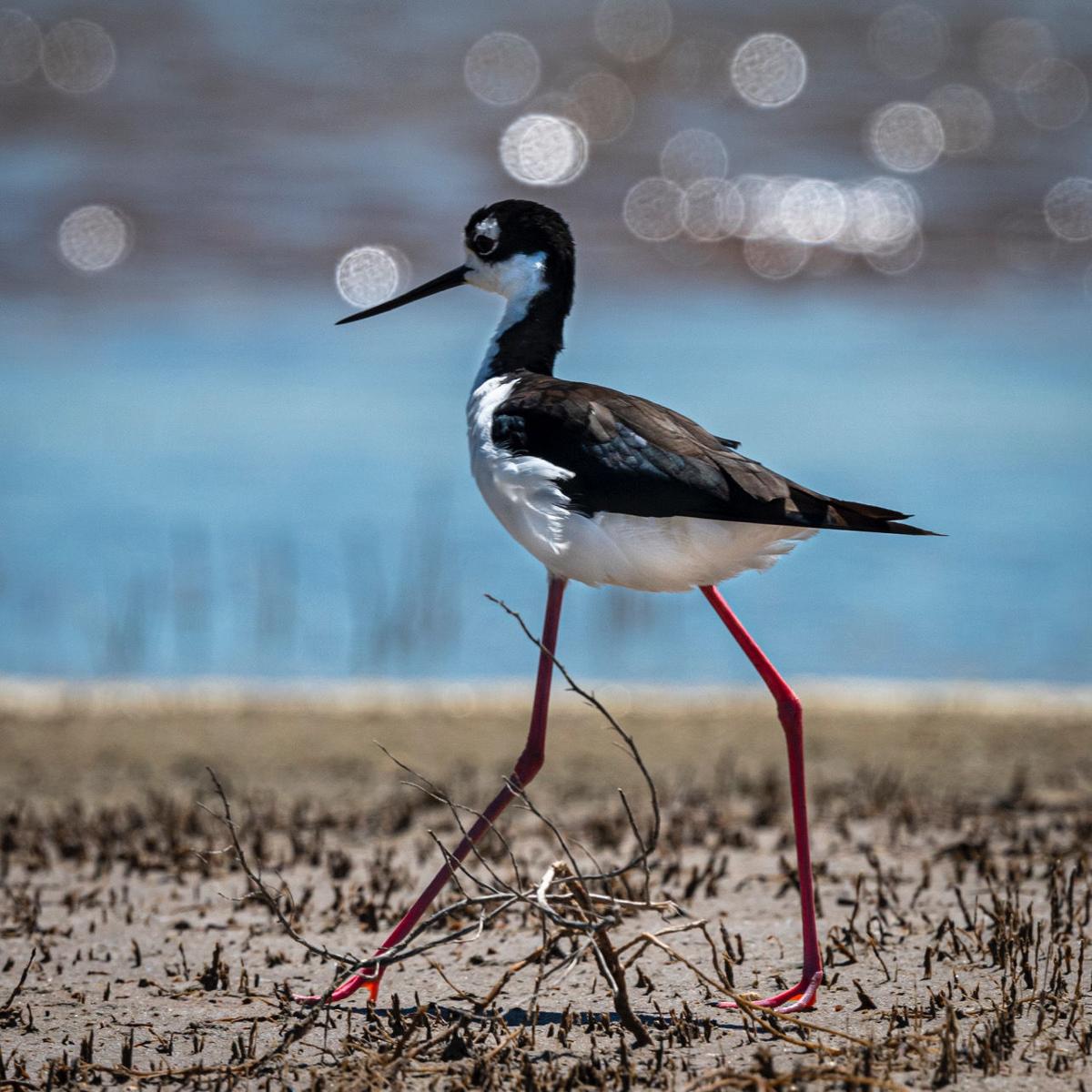 A black-necked stilt walks along shore at Quivira National Wildlife Refuge in Kansas. 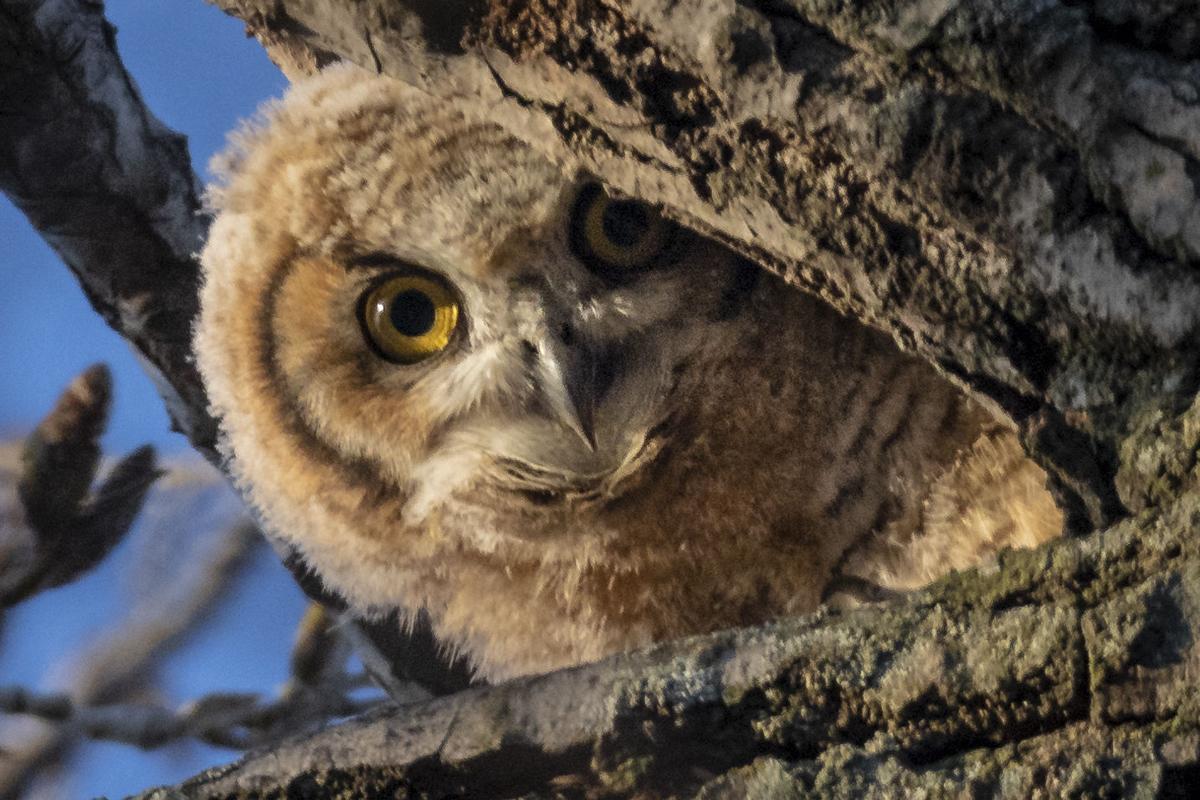 A fledgling great horned owl peers through branches in a Lincoln neighborhood. 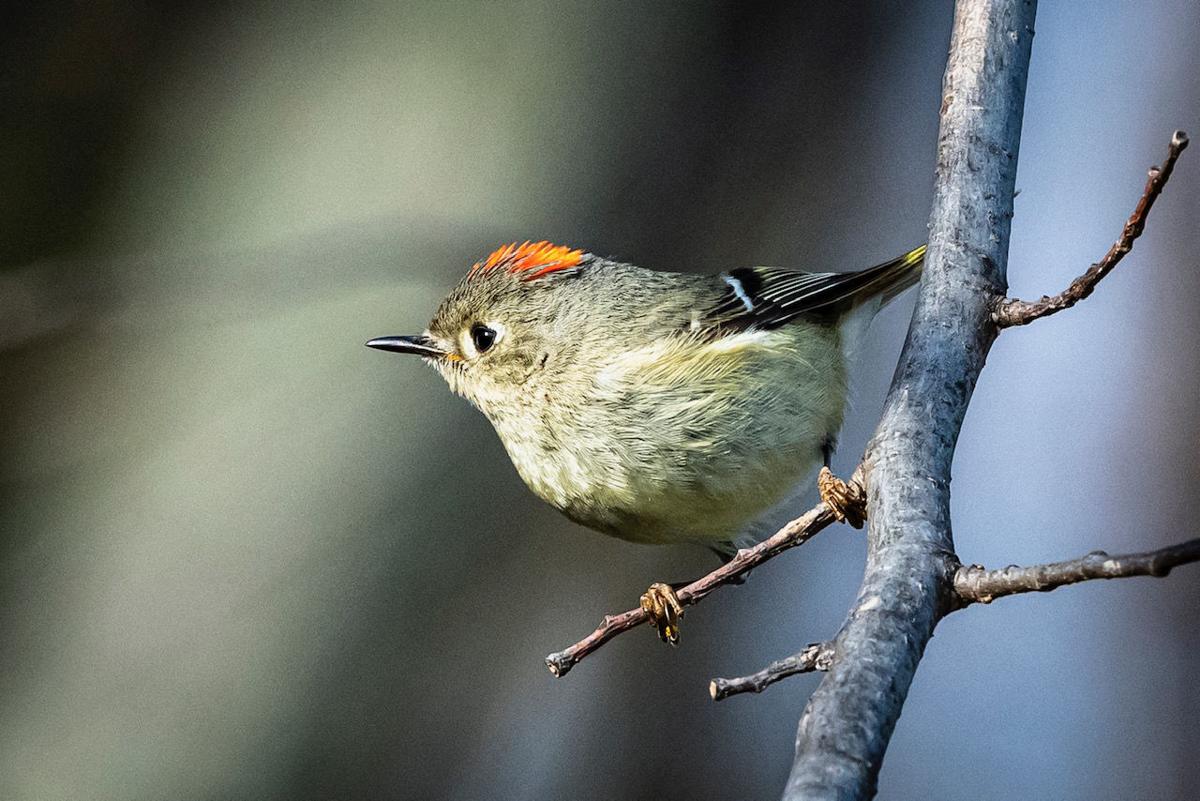 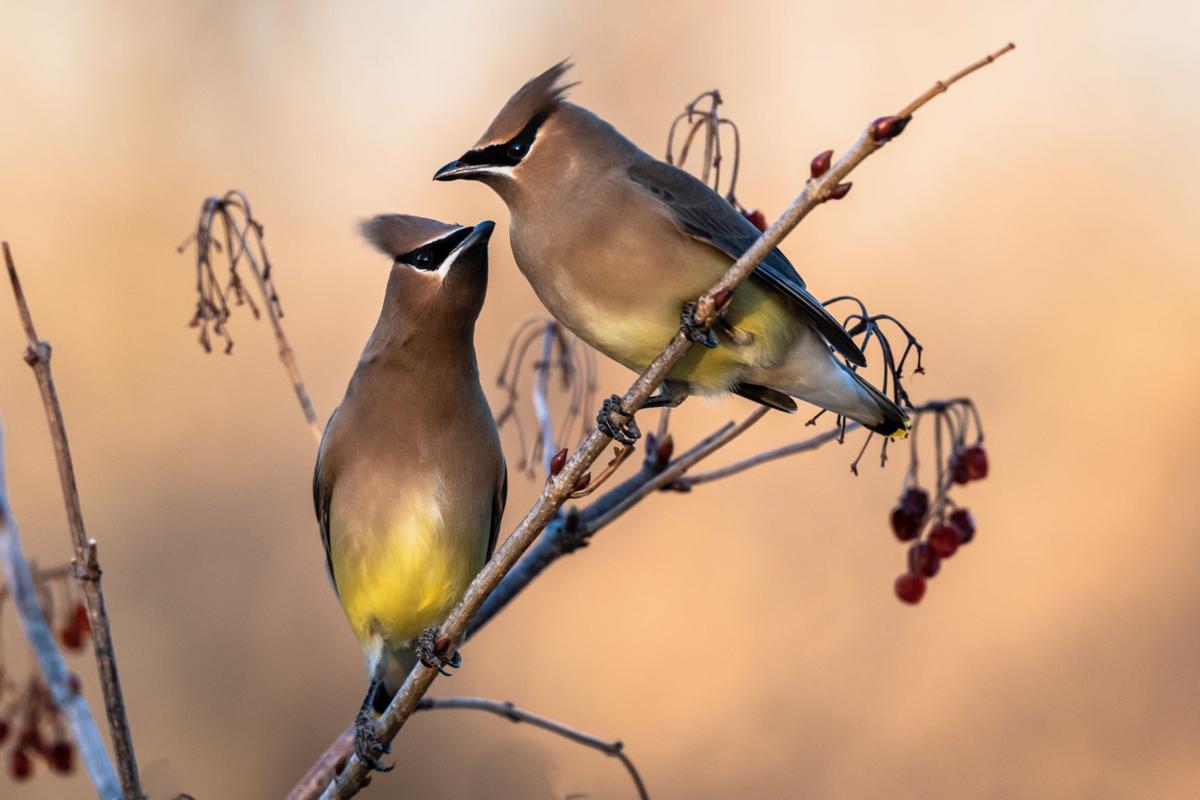 Cedar waxwings share a moment while breakfasting on fruit at Branched Oak Lake in March. 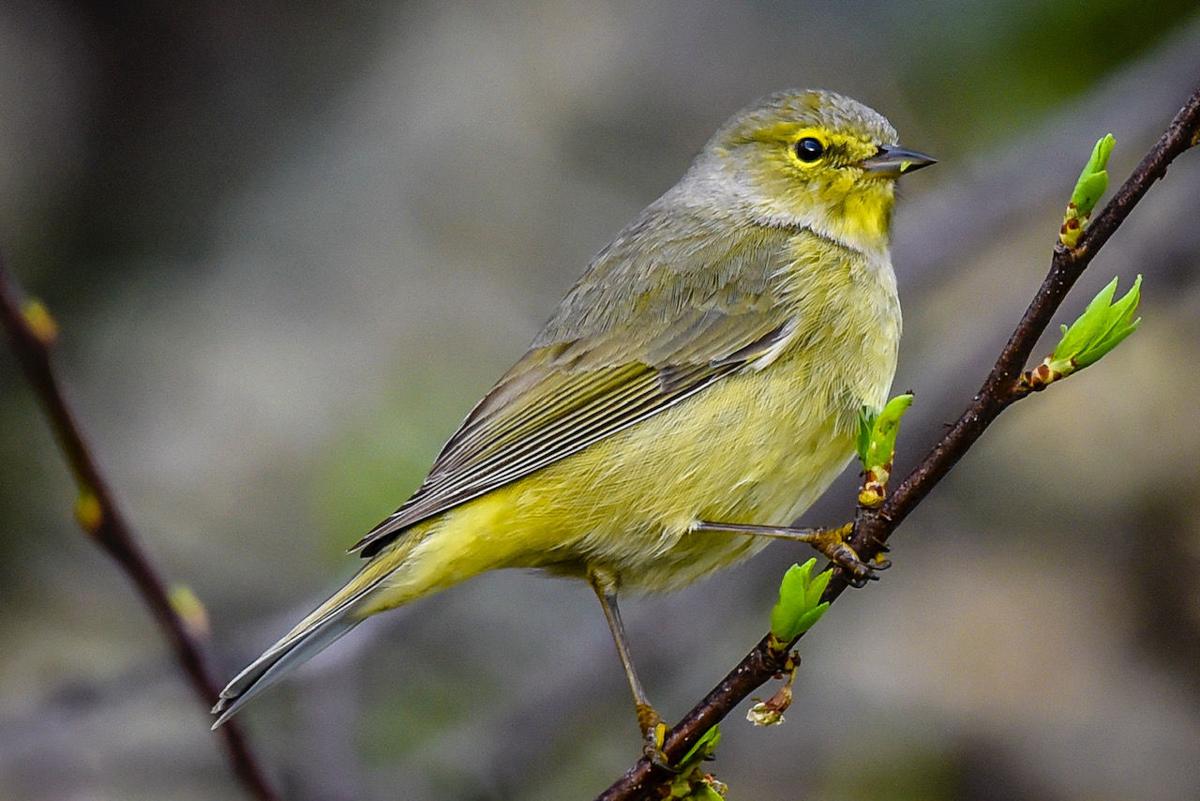 An orange-crowned warbler stops in Tierra/Briarhurst Park during spring migration in 2017.

Before COVID-19 rolled into Lincoln in March and changed people's activities, travel and habits, Tom White had an idea that 2020 would take him to interesting places to photograph the behavior of birds.

Then, city and state officials warned people to stay home. And as the weather changed to spring and summer, people ventured out and crowded parks and lakes where those birds gather as they migrate through the city and nearby countryside.

And White, 74, had to modify his ideas of following the Great Plains birds, and postpone that trip to Canada he had scouted last year and hoped to take in 2020.

Even so, it didn't keep him from getting some rather stunning photographs, of eagles and cardinals and hummingbirds, and the lesser seen ruby-crowned kinglet, a pint-sized predatory songbird northern shrike and hidden-in-plain- sight cedar waxwings and horned owlets — if you know where to look.

The former newspaperman migrated, himself, 23 years ago to several different work habitats, including spending more than six years at Nebraska Game and Parks, most of that time as Nebraskaland Magazine editor.

As a journalist he had been a sports editor in Tennessee, a city editor and managing editor in Montana, the editor of The Lincoln Star and the Journal Times in Racine, Wisconsin.

He worked in Racine for a year and then was brought back to Lincoln to help lead the merger of The Lincoln Star and Lincoln Journal in 1995.

But he left the newspaper business two years later, resigning suddenly citing lack of confidence in the paper's corporate leadership, direction and expectations for its news gathering operations. His values and those of the corporate leadership had diverged, he said.

More recently, he explained he could not see a future in journalism where he would be proud to spend his time, and didn't want to preside over the dismantling of a newspaper.

The latest numbers show that newsroom employment at newspapers across the country has fallen by around half since 2008, according to a Pew Research Center analysis.

And White did indeed find life after journalism. Since leaving the paper, he said, he's done interesting things at the Lincoln Children's Museum, Nebraska Game and Parks Commission and the Sheldon Museum of Art.

"I probably didn't make near as much money, but I had a lot of fun," he said. "And I'm not sorry at all that I had those experiences."

He also got married in 1997 to Kim Hachiya, who had been a reporter at the Star in the 1980s before taking at job at the University of Nebraska-Lincoln.

In 2010, White stopped earning a paycheck but still found compelling things to do with his varied skills. He took up two family history research and writing projects. And then five years ago, he picked up his camera and began a new journey.

He'd always had an interest in nature, he said, and in photography. One of his first purchases as an adult was a camera, a Nikkormat, which he still has.

His experience at Nebraska Game and Parks gave him a good education in the state's great outdoors.

"I met some people, biologists and writers who knew a lot about wildlife. So I soaked up what I could from them," he said.

There he met Michael Forsberg, a conservation photographer who has dedicated 25 years to photographing America's Great Plains, and the two continued their friendship.

And something else was pushing White into this new nature photography affinity. He had become increasingly dissatisfied with the self-absorption of the human race, with its focus on its own niche, and wealth and entertainment.

"I looked around and saw that there are these realms out there that are not human, and are every bit as valid as ours," he said. "I've come to think of them as a parallel universe. ... And I'd like to pay more attention."

His renewed interest in photography slowly gravitated toward birds, in particular plains birds.

And if you know Tom White, you know that when he dedicates himself to an interest, it is not casual. He becomes absorbed in the education of it.

In 2015 he bought a Nikon 750, got a 200-500 mm zoom lens, and started shooting. And he began the long process of teaching himself where he needed to be and when, and what he might see. He familiarized himself with different species of birds and their behaviors.

He drew the line at sitting in a bog of mud in a blind for hours. So he figured out what he needed to do to hand-hold his camera, move around and still get sharp photos with clean backgrounds. That meant considering the angle and position of the sun, the water level of a lake, the weather, the season.

He would follow other photographers online who posted information about locations of migrating or seasonal birds.

His goal became to get a collection of bird species on the plains.

"I revel when I get a new species photographed," he said.

One of his favorites? The black-necked stilt.

"They're just comical. I can be totally entertained by a group of stilts for a long time," White said.

He has created a blog where he posts photos and writes about what he witnesses.

"9/4/19, QUIVIRA NATIONAL WILDLIFE REFUGE, KS — American Avocets form a train, moving in a narrow file bobbing slightly; they swish their bills through the shallow, saline mud flat capturing invertebrates. It's an organized mob that soon attracts a crowd. Egrets — Great and Snowy — and Ibises descend in numbers. A Heron or two stand at the perimeter. The late comers are not worm eaters. They mingle and flap and squawk as human crowds do. Activity attracts, even when it is another's business."

And many times, since the pandemic struck, in his own backyard, where in May, a Cooper's hawk took a bath he documented.

White wants to make the point that he doesn't feel like his work is exceptional.

"I think there are really good photographers in this town," he said.

But many people who see his photos are impressed. They have asked him if he's going to sell his photos.

"I'm not interested," he said. "This is not a business; I don't want to spend my time doing that."

He's more interested in the thrill of the chase and the interesting behavior shots he can get.

"I've gotten some new species this year that I was surprised by and pleased by," he said. "It's amazing what will make your day sometimes."

The impact of climate change on Nebraska's water: Too much and too little

It's once again possible to drive -- for the first time since February -- between U.S. 77 and Warlick Boulevard on Old Cheney Road.

The Legislature's Ag Committee wants answers from the Ag Department director on allegations that it failed to enforce a state law governing cat and dog breeders and rescue facilities and retaliated against a department whistleblower.

Authorities had to rescue a group of kayakers south of Mullen recently. One adventurer had to hike several miles to get help for a kayaker suffering from hypothermia.

Tom White, a former newspaperman and editor of the Lincoln Star from 1982-1994, has become an accomplished bird photographer in his retirement. Here he's shown at Conestoga Lake near Denton, which is one of his favorite places to take photos. 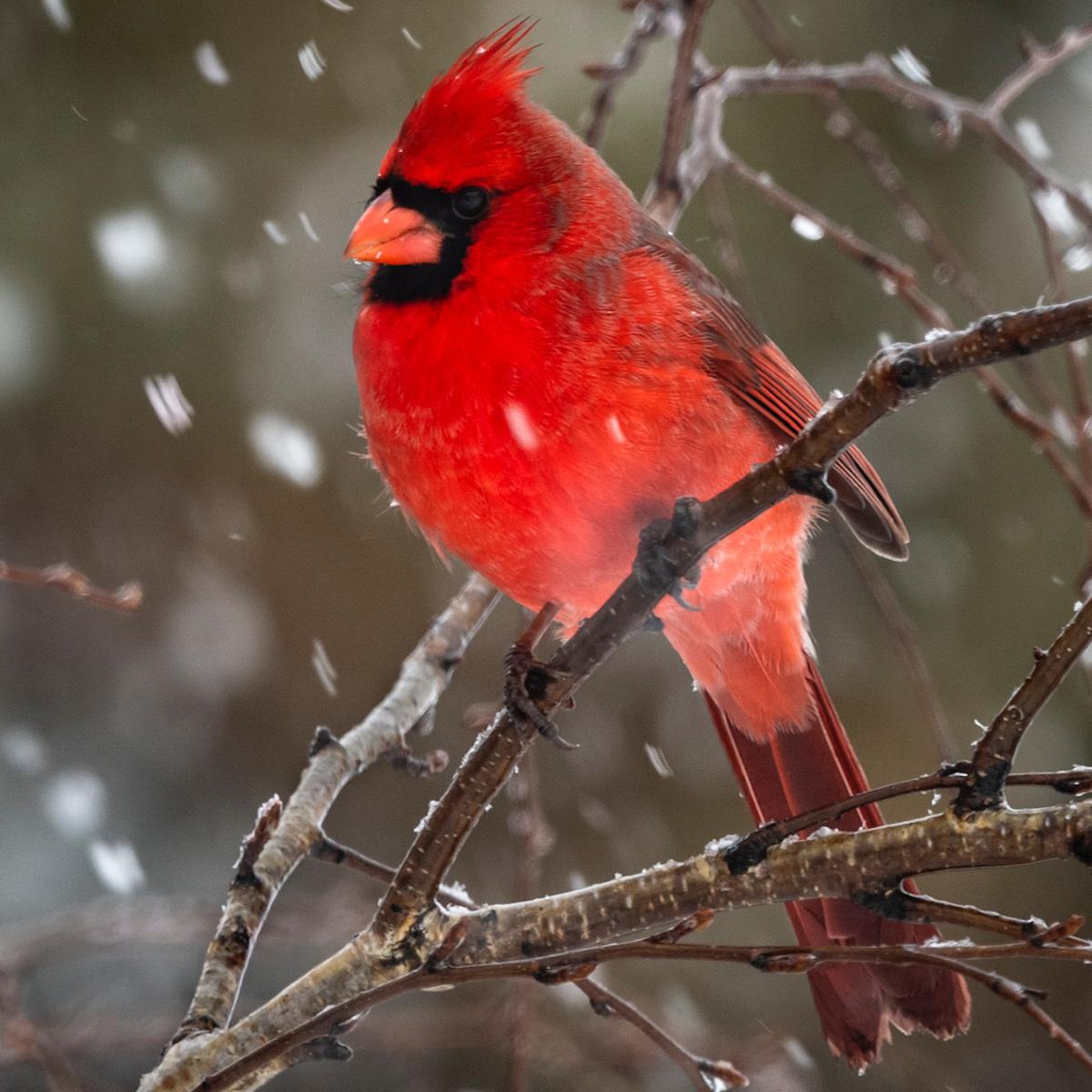 A northern cardinal in a snow squall at Holmes Lake Park. 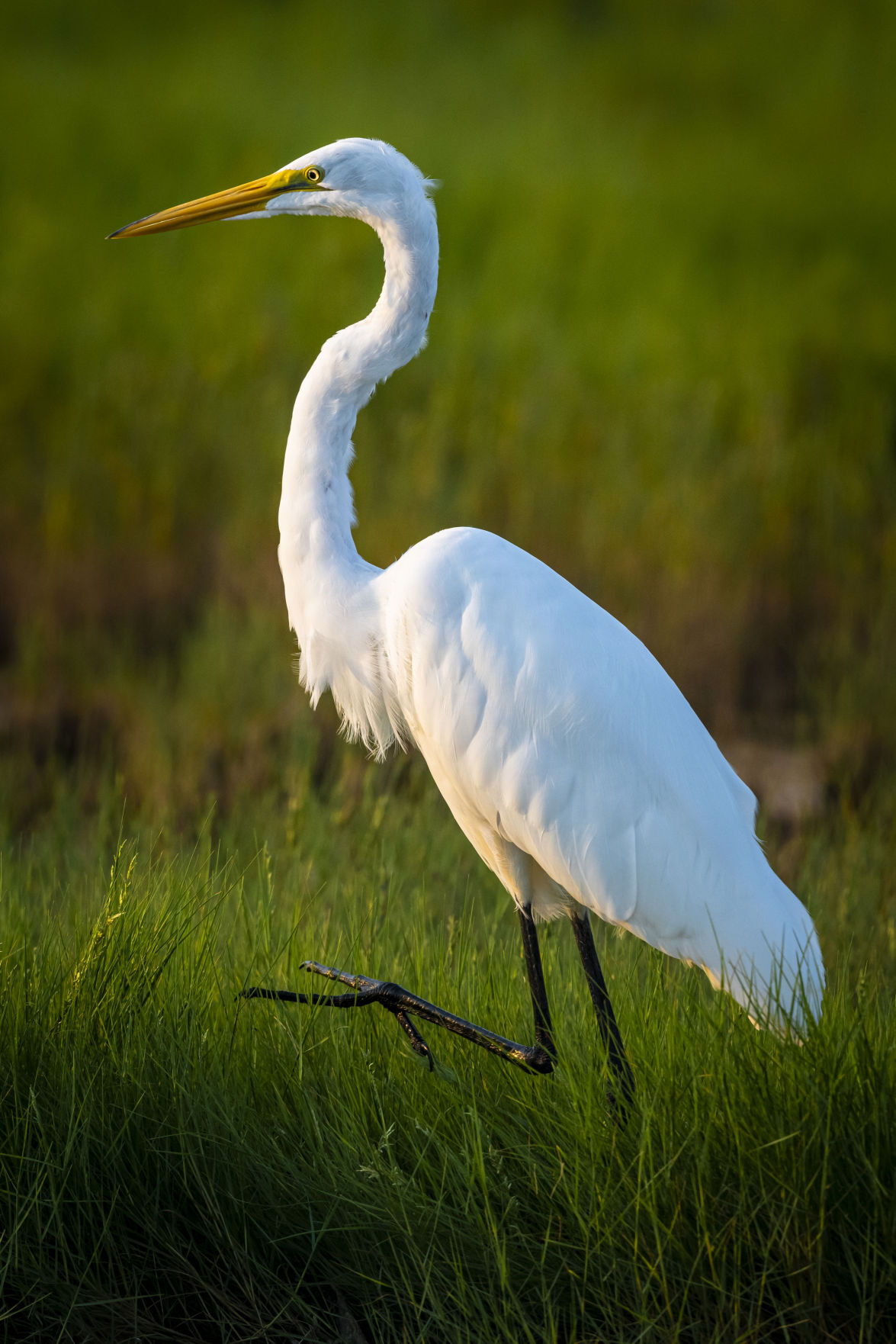 A great egret steps into the morning light at Quivira National Wildlife Refuge in Kansas. 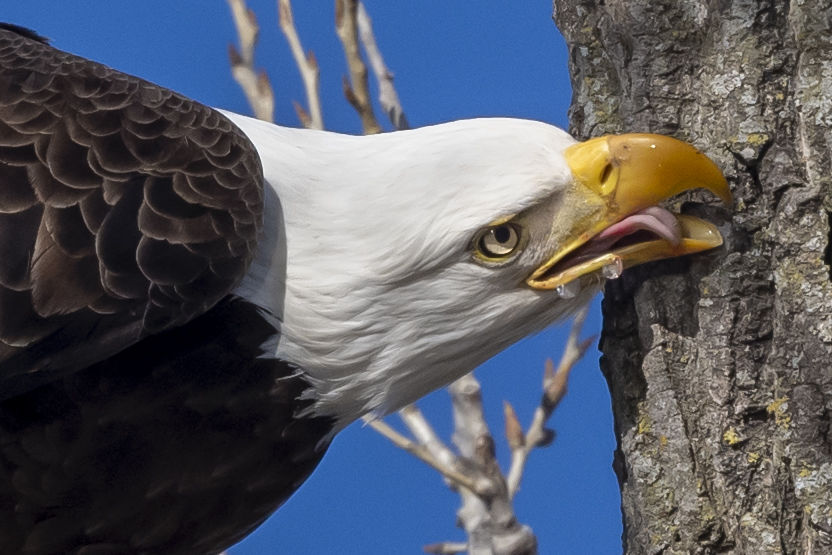 A bald eagle wipes scales from its beak after devouring a fish in March at Pawnee State Recreation Area.

A black-necked stilt walks along shore at Quivira National Wildlife Refuge in Kansas.

A fledgling great horned owl peers through branches in a Lincoln neighborhood.

Cedar waxwings share a moment while breakfasting on fruit at Branched Oak Lake in March.

An orange-crowned warbler stops in Tierra/Briarhurst Park during spring migration in 2017.