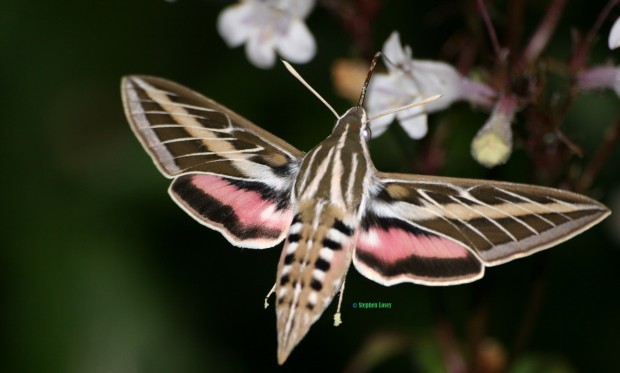 Not all moths are dust-colored pests. The white-lined sphinx moth is a key pollinator, and one of many that volunteers might find during Nebraska Moth Night. 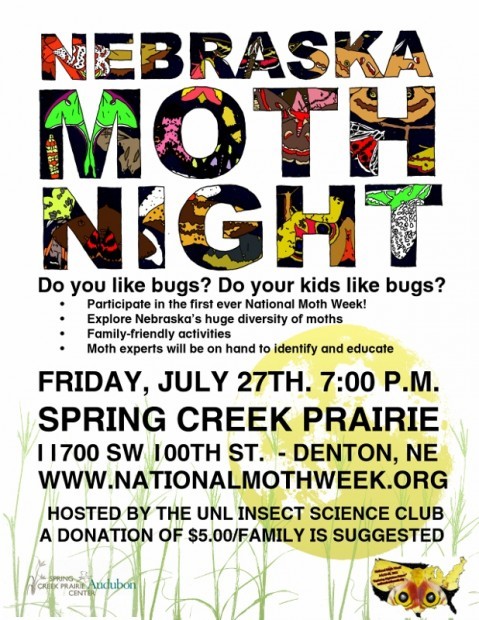 If there’s one thing moths like, it’s a cheap beer.

“The sweeter and stinkier the better,” said Andy Matz, a senior insect science student at the University of Nebraska-Lincoln.

A belt of Pabst Blue Ribbon or Colt 45 mixed into a paste of fermented fruit is borderline irresistible to just about any of the estimated 10,000 North American species of insects, he said.

On Friday night, Matz and some fellow students will hang a few high-powered lights and slather the bait on a couple of trees outside the Spring Creek Prairie Audubon Center in the hopes of doing something many Nebraskans try to avoid.

They want to attract moths -- lots of them.

This is the goal of Nebraska Moth Night, an offshoot of the first National Moth Week.

Technically, there are 18 countries with participants, and there turned out to be another Nebraska moth night in Fontenelle, Matz said.

“The more the merrier,” he said.

National Moth Week, which began Monday and had moth nights confirmed in 49 states -- what gives, North Dakota? -- grew out of a series of moth nights that a couple of New Jersey residents have put on in East Brunswick since 2005.

People have done large-scale butterfly counts for years, Matz said. Moths, on the other hand, haven’t attracted such love.

But the moth seems to be drawing more interest these days. Peterson Field Guides recently published a moth-specific edition. And National Moth Week has received quite a bit of press, too. National Geographic blogged about it. Scientific American featured it.

“For its first year, it’s catching on quite a bit,” Matz said.

Since the UNL club began publicizing the local event, Matz said, people have emerged from their cocoons to express interest or to ask questions.

The main goal, he said, is to get an overall count of the different moths in the area and submit the information to those organizing National Moth Week.

Matz is one of about a dozen people involved in the UNL Insect Science Club who will give a presentation about some of the area’s moths, their importance in the overall ecosystem and why people should care about them at all. Then attendees will head outside at dusk to catch some.

“Doing something like this allows us to get an idea of how certain populations are doing,” he said.

And by hosting the event on the prairie, Matz said, volunteers are likely to see moths that are “much more strikingly colored and interesting to view than the ones you see in your house.”

Plus, he said, "you never know when you are going to find something new.”

Those who attend are asked to donate $5 per family for the evening. The Audubon staff and UNL Insect Science Club will provide moth-attracting supplies, including the cheap beer.

"It's convenient for students," Matz joked.

Not all moths are dust-colored pests. The white-lined sphinx moth is a key pollinator, and one of many that volunteers might find during Nebraska Moth Night.