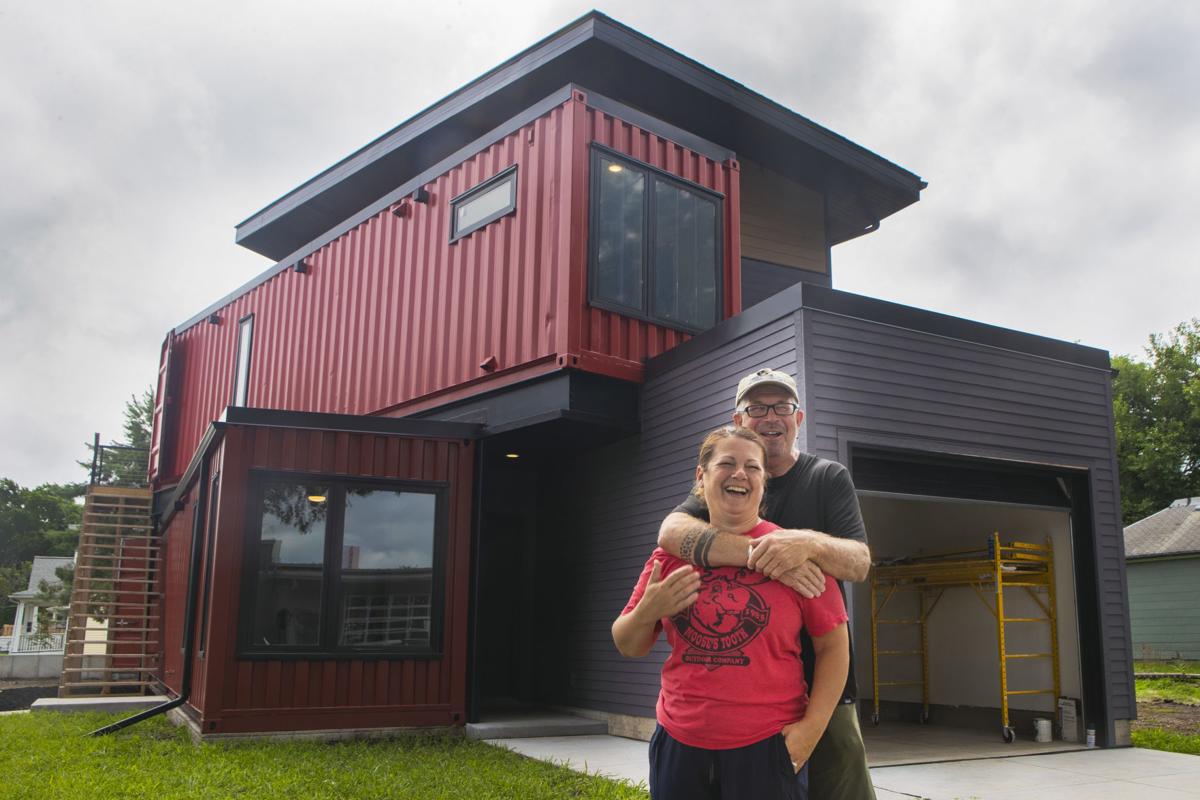 Months after their initial deadline, Kris and Julie Sonderup are finally close to completing Lincoln's first container house duplex — one of four they have planned near 28th and Vine streets.

The owners of Cycle Works are working in duplexes built around steel storage containers at 28th and Vine streets.

Not long after he stacked a pair of steel cargo containers near 27th and Vine streets, Kris Sonderup predicted he could convert them into a finished duplex within months.

That was nearly a year ago.

“That was unrealistic,” he said. “But we’re very excited with the way it came out.”

And then take every lesson they’ve learned and every surprise they’ve solved in the last year and apply it to the next three duplexes the couple has planned for the property they own along North 28th Street.

The Sonderups have been thinking about this project for years, inspired by their visit to the Boxyard in Tulsa, Oklahoma, a commercial district built with shipping containers.

In 2018, they announced plans to build seven duplexes — two-story steel and wood structures wrapped around 40-foot-by-8-foot containers — across the alley from Cycle Works and the Moose’s Tooth, their longtime bicycle and outdoor gear shops.

They scaled their plans to five double-decker buildings, sought construction bids, applied for tax-increment financing and received a waiver from the city’s Urban Design Committee, because the modern housing project was unlike any other home in the historic Hartley neighborhood.

By then, though, the project’s predicted construction costs had skyrocketed by about 25%, because steel costs were rising, contractors were in demand and none of them had ever worked on container housing.

The couple scaled back further, to four duplexes, and broke ground last year, planting the pair of containers on their corner lot.

And then they — and their contractors — started climbing a learning curve, Kris Sonderup said.

“The different variety of materials we’re using, sometimes they’re a little bit of a challenge.”

They had to solve insulation and condensation challenges traditional wood construction doesn’t pose. They learned that cutting into steel for doors and windows — and then framing those openings up — isn’t easy.

When one step got delayed, it disrupted the schedules of the next subcontractors, he said.

His original October deadline came, and then went. And this spring, just as the duplex was nearing the finish line, a closed-down country with nowhere to go pushed demand for bicycles and bicycle repairs to a record.

Sonderup was stretched between the construction site and his store across the alley, which had never been busier. “That’s taken all the energy,” he said.

But now the duplex is nearly done, and a day rarely passes without a stranger stopping to talk about it. He recently found two real estate agents who’d let themselves in an unlocked door to take a look.

“I haven’t heard one negative comment. I’ve heard a lot of people say they like the look of it; it’s something that’s totally different.”

The couple painted each container a slightly different shade of red, though they might change the colors of the future duplexes. They installed large windows and added drywall to the containers, though they kept some steel exposed.

“Because that’s what you want to see,” Julie Sonderup said. “That’s the whole point of it.”

The one-bedroom unit upstairs measures 740 square feet, and the two-bedroom apartment below 925 square feet, not including the garage.

They’d originally planned to spend about $250,000 on construction, but just as the timeline grew, so did their budget. And they’ve invested nearly $300,000 so far, Julie Sonderup said.

The couple has a list of interested, potential tenants, Kris Sonderup said, though they haven’t selected any yet, nor have they decided what they’re going to set for rent.

They plan to start building the second duplex this summer. They’ll make a few changes from the first design — stealing space from the laundry room for the bedroom or bathroom, for example — and what they learned during the first build should speed the second.

But Kris Sonderup isn’t making any optimistic guesses this time.

“I won’t give you a deadline,” he said. “But it will make the next one quite a bit easier.”

Junk foods that are surprisingly vegan

Junk foods that are surprisingly vegan

The top travel destinations in the U.S. as COVID restrictions lessen

The top travel destinations in the U.S. as COVID restrictions lessen

Watch Now: Where are these features in Lincoln?

Photographer Francis Gardler took photos of some interesting architectural abstracts in Lincoln. See if you can figure out where they are.

Ben Fitzwater built his boat with what he had around the house, including a riding lawnmower and a beer keg.

Months after their initial deadline, Kris and Julie Sonderup are finally close to completing Lincoln's first container house duplex — one of four they have planned near 28th and Vine streets. 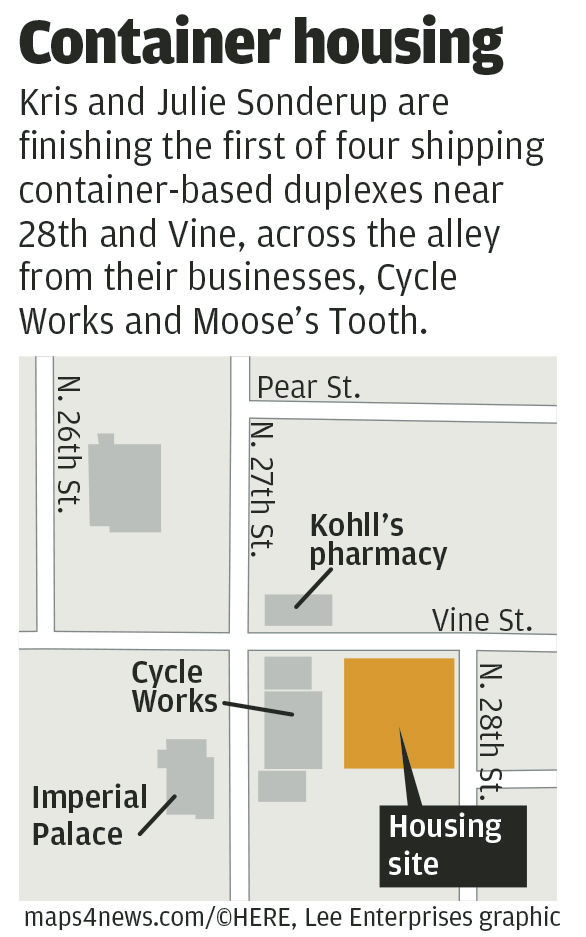 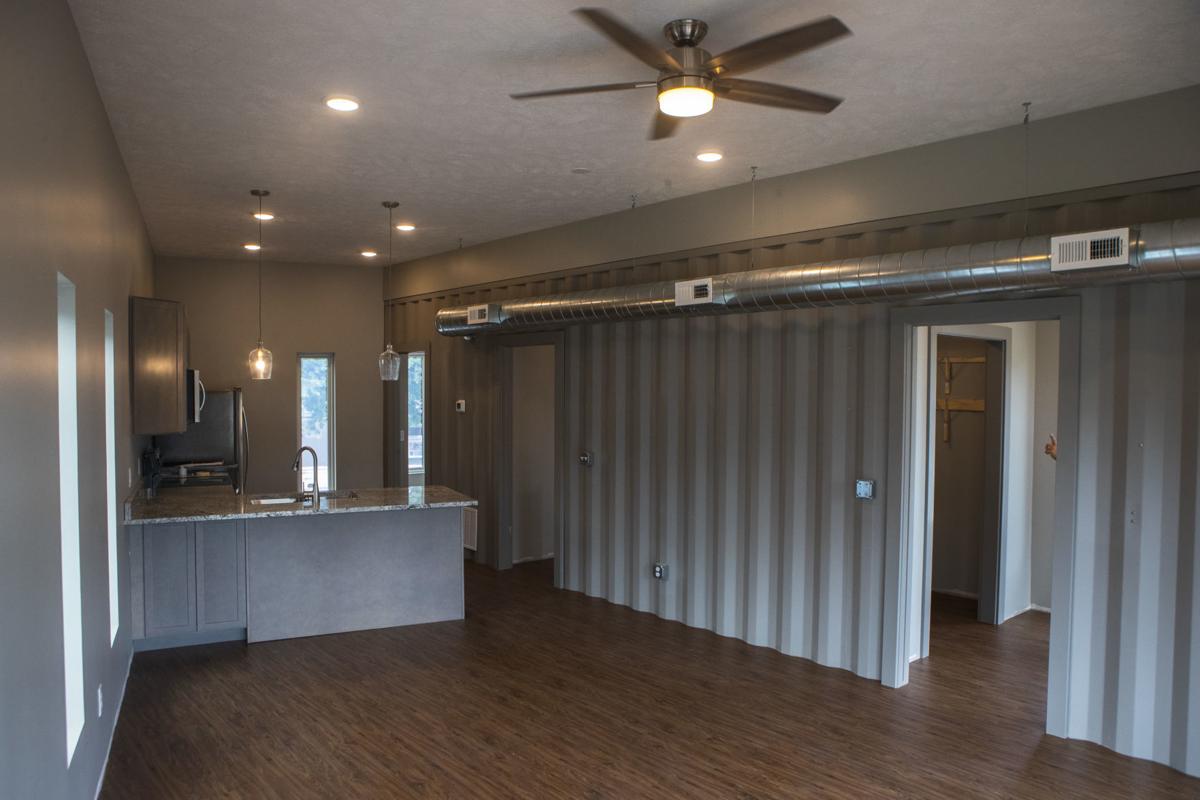 The owners of Cycle Works are working in duplexes built around steel storage containers at 28th and Vine streets.