The Apple Corps Club, a throwback on Lincoln's East Campus, thrives in a new century
0 Comments
Share this
1 of 2 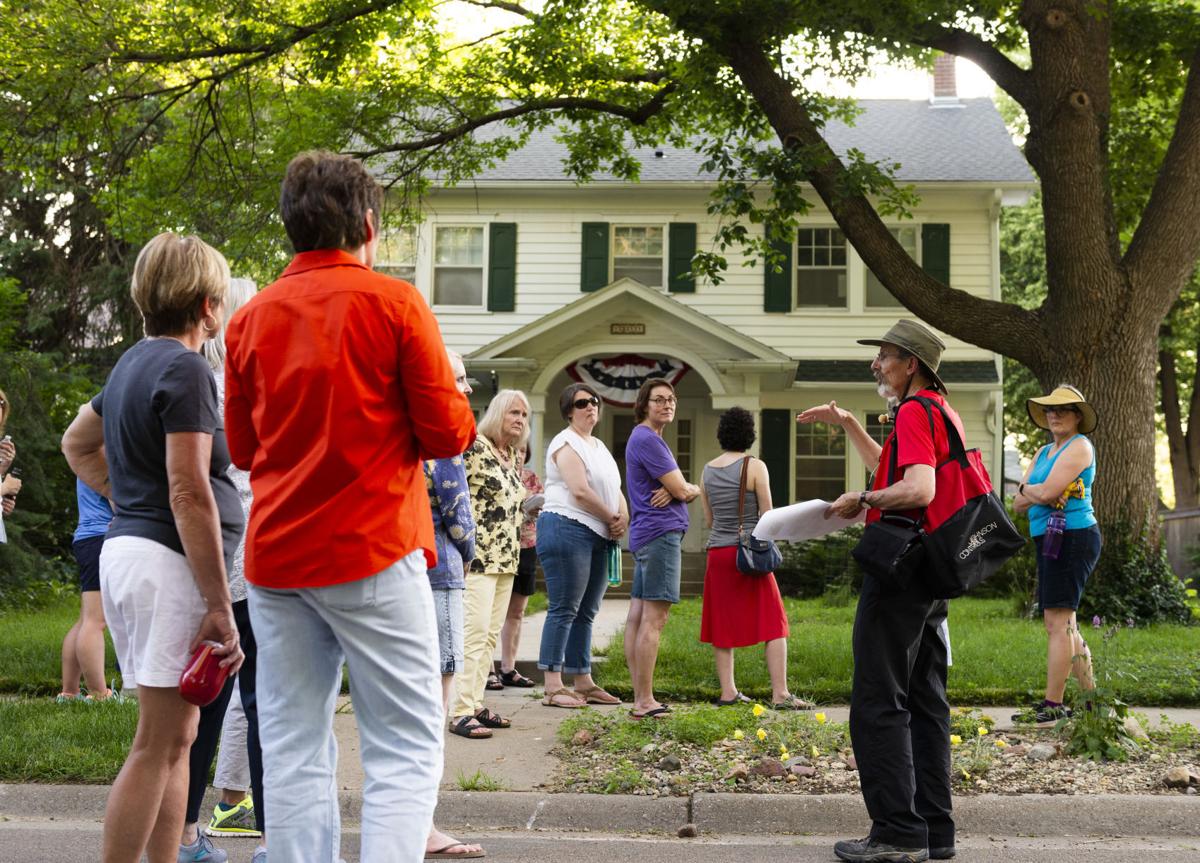 Ed Zimmer gives the Apple Street Corps and the East Campus Starrs a walking tour about the history of the houses in the neighborhood Monday. 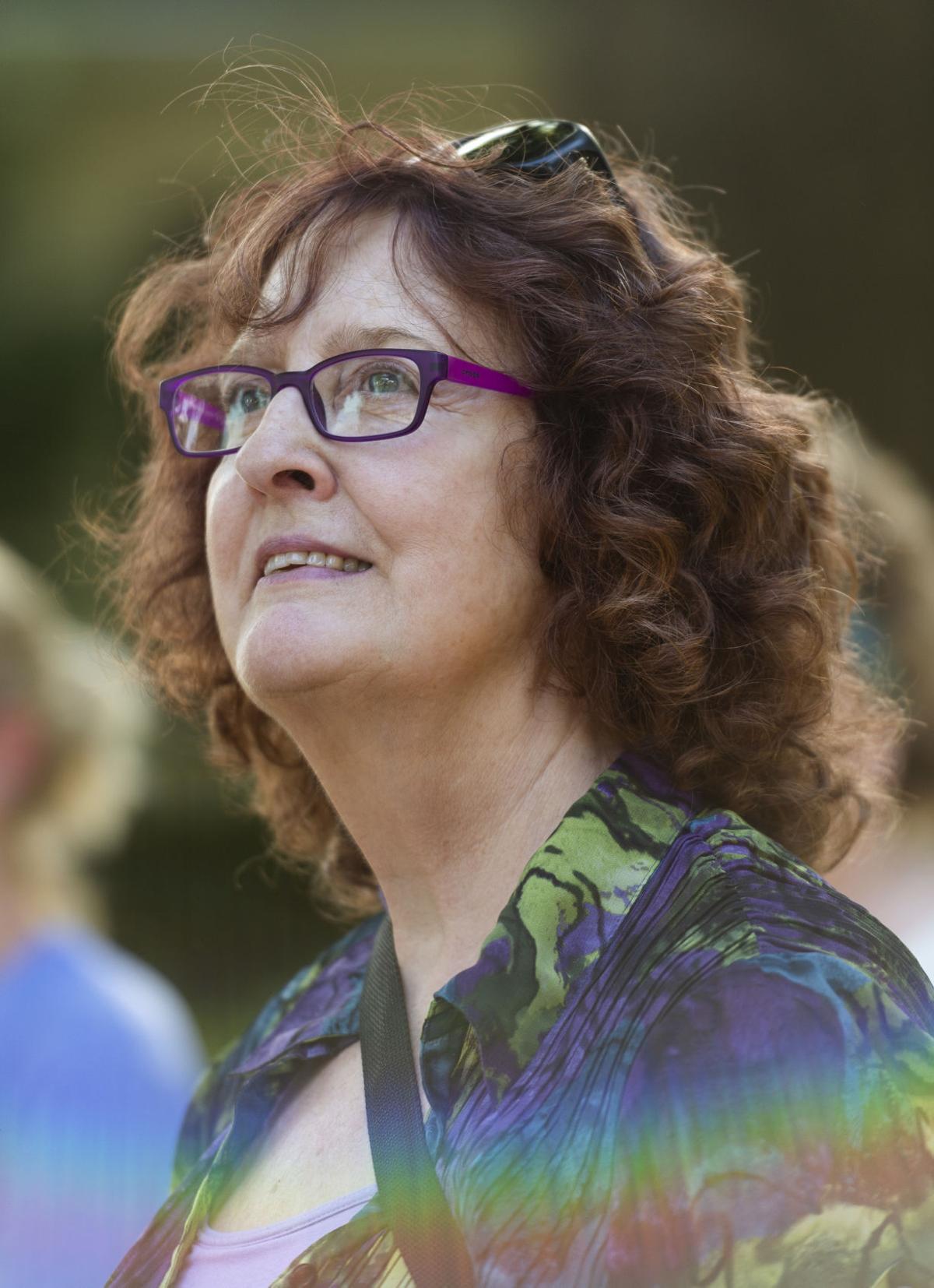 Lora Black looks up at a house during a walking tour for members of the Apple Corps and the East Campus Starrs. Black is a member of both neighborhood groups.

Someone spelled the name wrong on the club’s flyer for the annual picnic at Idylwild Park back in 1983.

The handwritten invitation — stuck in front doors of homes up and down Professors Row and beyond on UNL's East Campus — instructed guests to bring their own table service and chairs, a hot dish, a cold dish and a beverage (non-alcoholic, if you don’t mind).

“Come for fun, food and friendship on Friday,” the invite proclaimed. “Sponsored by the Apple Core Extension Club.”

The typo slipped into history in the pages of a fat three-ring binder.

Not that the club, formed eight years earlier by a group of neighborhood women under the auspices of the county extension service, didn’t like a good play on words.

That’s what the Apple Corps Extension Club was, after all.

“Apple Street was the core of the neighborhood,” said Marge Thomssen, one of the group’s founding members and the wordsmith behind the name.

Thomssen also started the East Campus Starrs, a sister group named for yet another street in the neighborhood.

The Apple Corps met in the morning — the second Tuesday of the month — and Thomssen had gone back to college and eventually entered the working world. The new club would meet in the evening to suit the needs of the modern woman.

“Stars come out at night,” she explained.

The Starrs were out again Monday night, along with members of the Apple Corps, all of them following a man in a floppy hat as he talked about the history of the homes in their neighborhood.

Ed Zimmer, the city’s retired historic preservationist, regaled the two groups (who on occasion arrange a joint meeting) with stories of past residents and architectural intrigue.

There was a great big ginkgo tree there, he said, pointing to a backyard. (“Gone,” someone in the crowd responded.)

For more than an hour, Zimmer showed off timeless American Foursquares and sturdy squat bungalows to the appreciative all-female crowd.

The modest home of the Wilson sisters — botany teachers. The spacious home for a family of farmers. A professor of animal science. A janitor.

To start the tour, the Apples and Starrs met on Lora Black’s driveway on North 37th Street. Black, a melodious-voiced public radio announcer, has long been an Apple.

Cindy Lange-Kubick: Josh is the man in charge of PooPatrol and his own destiny

“Both groups do wonderful things to support the neighborhood, local schools and other nonprofits,” she explained.

And: “It’s a great way to get to know your neighbors.”

The pair were neighbors on Idlywild when they joined the Apple Corps in the '70s.

“There were so many young people, and extension clubs were big back then,” Kendrick said. “Everyone would bring their little ones.”

The extension service would provide the monthly lesson.

How to make better biscuits.

The art of homemade noodles.

A lesson on legumes (Do you know your beans?)

Housekeeping in a hurry. (Yes, please.)

"During its peak, there were hundreds of clubs across the state," he said.

“They’d have all the programs, and you went to pick up the materials,” Kendrick said. “We had so many people and such a variety of women we started doing our own.”

The members took turns hosting in their living rooms and backyards, scouting out speakers.

“We never had enough money to open a checking account,” Kendrick said.

“I kept mine in a money bag in the closet,” said Himmel, a former group treasurer.

Kendrick once told her kids: If I kick off suddenly, that belongs to the Apple Corps.

Guests from the Nebraska State Historical Society. Habitat for Humanity. Talks on restorative justice and travelogues on Africa and India.

Last month, Jenna Bartja enlightened the Starrs with a talk on dark skies and astrotourism. (The adventure specialist for the Nebraska Department of Tourism lives in the neighborhood but, as of yet, is neither an Apple nor a Starr.)

This month, Nikki Moore shared the evolution of her photography business with the Apples.

Each club makes an annual donation to a worthy cause.

No scandals in the almost 50-year history, said Himmel and Kendrick.

And not much fanfare, although years ago a reporter came calling with questions about zucchini.

She wrote for the food page at The Lincoln Star, Himmel said.

“We decided to have a meeting and have everyone bring a different zucchini recipe,” Kendrick said. “She came back and sampled the food.”

The story is there in the three-ring binder along with the Apple Corps recipes.

Kendrick moved out of the neighborhood in 1978, but she’s still an Apple. So is Thomssen, who moved away last year.

There was a camaraderie to the group from the very beginning, she said.

“It’s hard to put into words. Education was important to us. Ag Campus was important. That love of learning.”

The same kindred spirit carried over to the Starrs.

Lincoln shoppers skittish as they venture forth without mask mandate

At the Tuesday morning meeting of the Apple Corps, members sit in the shade of Claudia Lindley’s backyard.

They eat slices of Janelle Lamb’s rhubarb bread. They pepper the speaker with questions. They confirm next month’s meeting at Lamb’s house with school board member (and neighbor) Annie Mumgaard as the featured guest.

Apple Corps member Teri Ourada-Hubka asks if they could host another Teddy bear drive for the Child Advocacy Center. (Of course.)

And someone else wonders about a gift for Zimmer, their tour guide from the night before.

Lora Black — with her dual membership — confirms that the Starrs gave the historian an honorarium.

A short discussion ensues among the Apples in attendance.

We need to give the same amount, someone says.

“We don’t want to be the cheap group.”

Study: Your food habits might be the reason you're single

Watch Now: How to plan for retirement

Watch Now: How to plan for retirement

Watch Now: How to keep your phone data safe from hackers

Watch Now: How to keep your phone data safe from hackers

Cindy Lange-Kubick: Ripping off the masks and what comes after

Will Americans emerge from the pandemic as a kinder more unified people? Not a trick question.

Election Day in November 2020 -- in the midst of a pandemic -- seemed like the perfect time to open up a nonpolitical polling place. And one Lincoln woman did just that.

Visitors to Lincoln woman's backyard have one question: When's your farmers market opening?

Meet the Lincoln mail carrier who goes big on her family's pandemic-inspired garden by building a greenhouse, raised beds and enough produce to (hopefully) feed her family and (probably) everyone she knows.

By moving the walk-up ice cream shop within view of the stadium, Zesto hopes to recreate the prominence it had for decades when the College World Series was held at Rosenblatt Stadium.

The scholarship was established by the Omaha-based Set Me Free Project after the 2017 abduction and slaying of Sydney Loofe.

Andy Hoffman's family will be running on Father's Day; put on your shoes and join them

The annual Husker Football Road Race is Sunday, and Husker players will be joined by runners -- including the family of Andy Hoffman -- to raise money for pediatric brain cancer research.

Fifty years after the program first competed in 1971, alumni are coming together to remember the team’s successes and sponsoring changes to help ensure another 50 years of rowing at the University of Nebraska-Lincoln.

Cindy Lange-Kubick: Celebrating Civic Saturday with a book to bring us all to the table

During the pandemic, Steve Smith of Lincoln holed up in his home office with his cat Franklin on his lap and, with the help of a few fellow writers, wrote "Reclaiming WE," a book designed to engage Americans in democracy.

Cindy Lange-Kubick: The joy of summer brought to you by Deb and her produce stand on the highway in Lincoln

Deb Heldt has been serving up summertime from her produce stand in Lincoln for more than 30 years.

Ed Zimmer gives the Apple Street Corps and the East Campus Starrs a walking tour about the history of the houses in the neighborhood Monday. 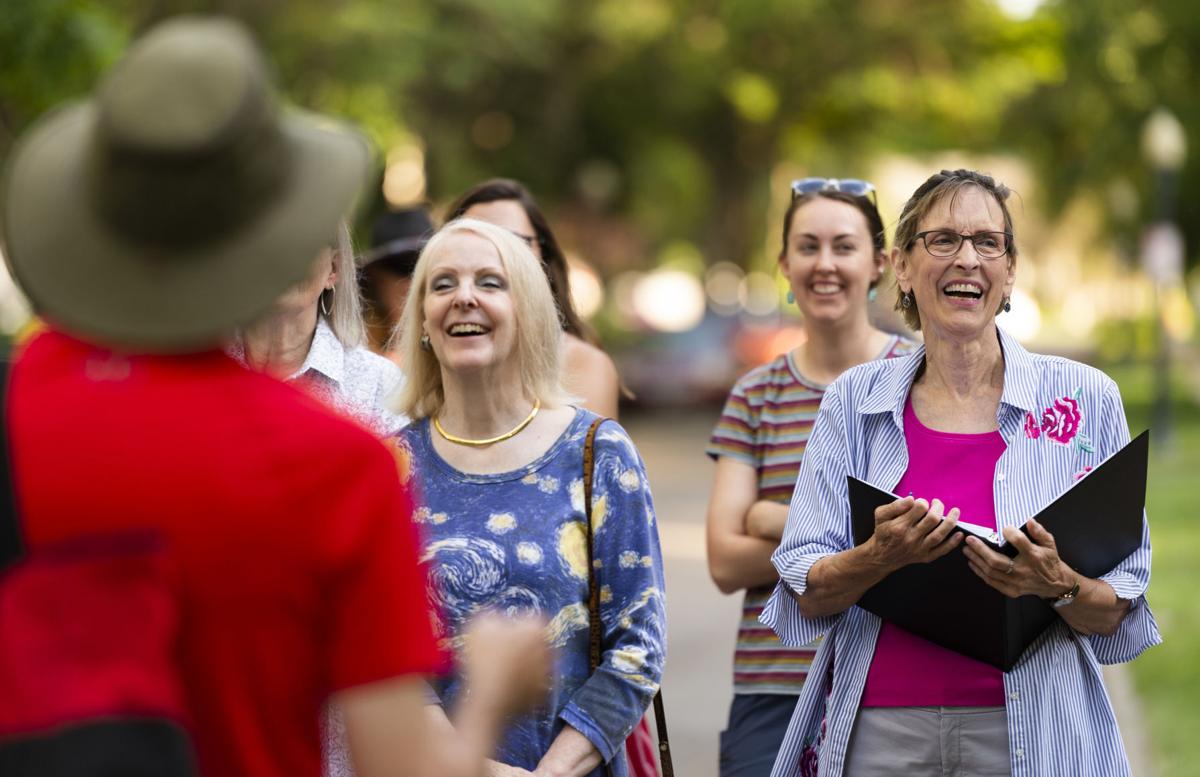 Lisa Warren (right) and Mary Belka (left), from the East Campus Starrs, laugh at one of Ed Zimmer's jokes Monday during a walking tour on 37th Street. 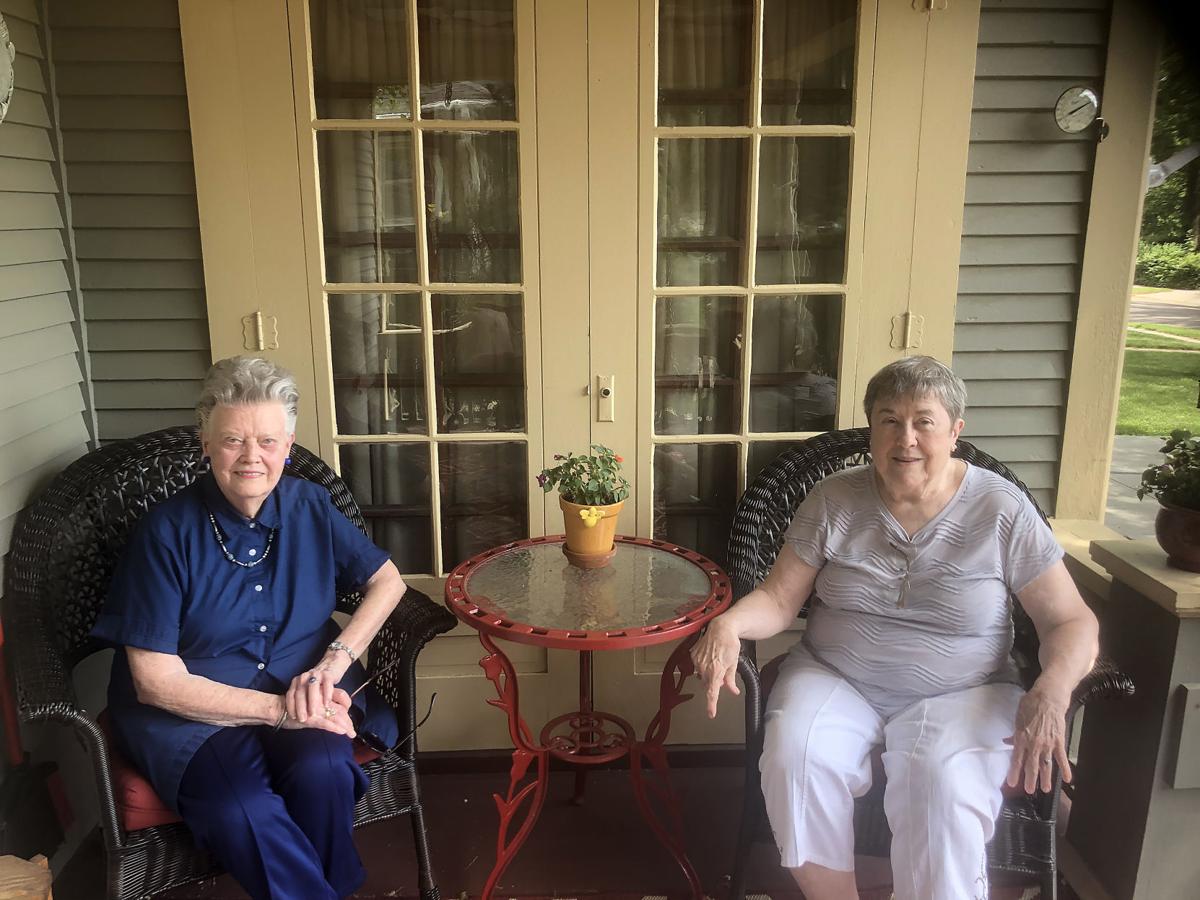 Lora Black looks up at a house during a walking tour for members of the Apple Corps and the East Campus Starrs. Black is a member of both neighborhood groups. 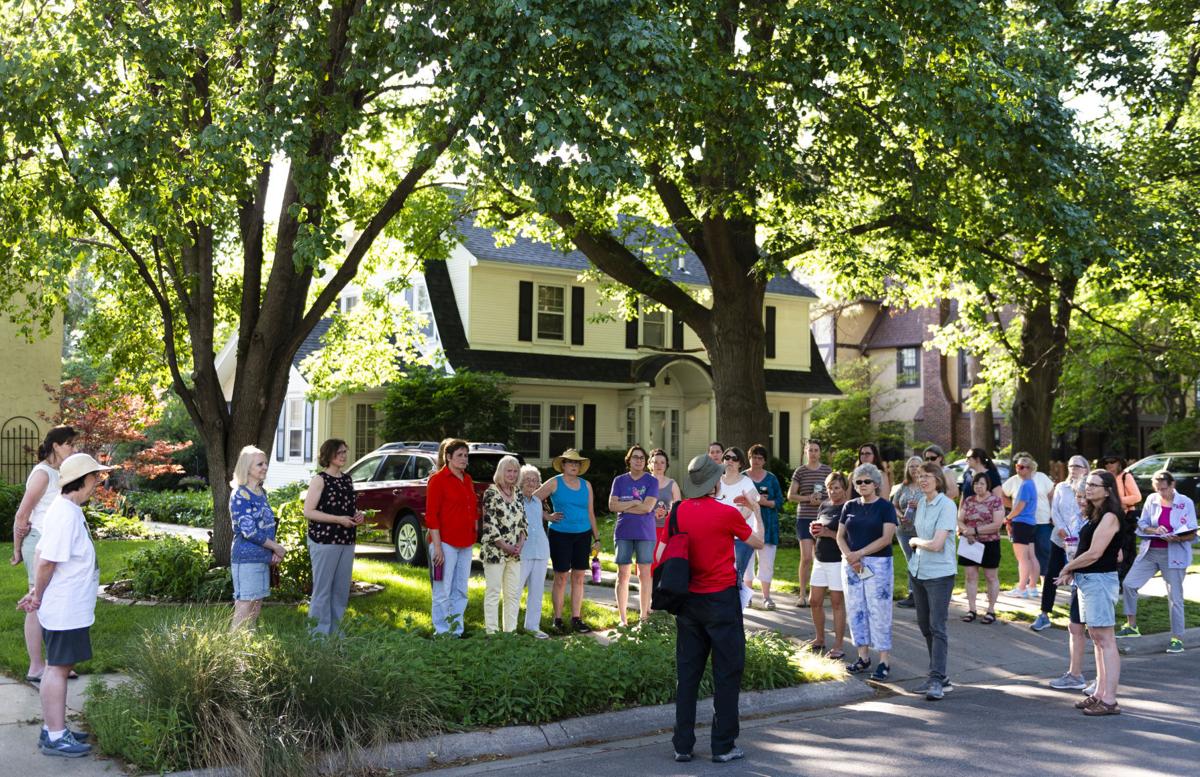 Ed Zimmer give the Apple Street Corps and the East Campus Starrs a walking tour about the history of the houses in the neighborhood on Monday. The Apple Corps started in 1975 and met in the morning once a month, and the Starrs followed several years later, meeting in the evening for women who worked during the day.