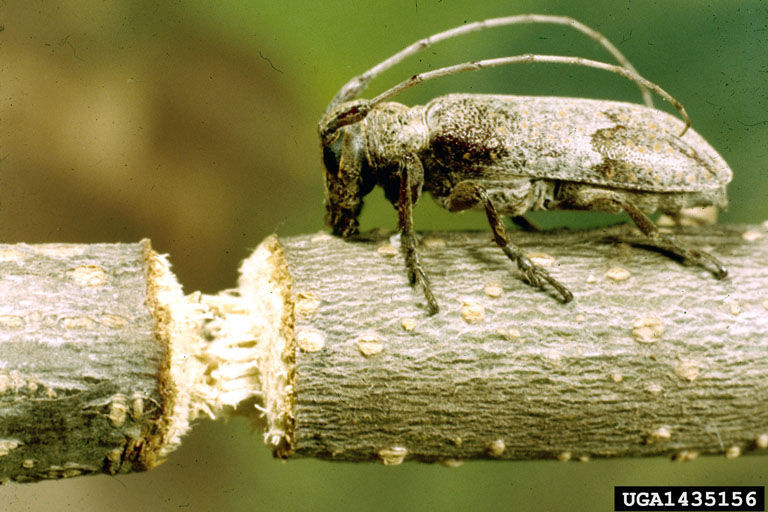 An adult twig girdler leaves a telltale pattern on a twig. 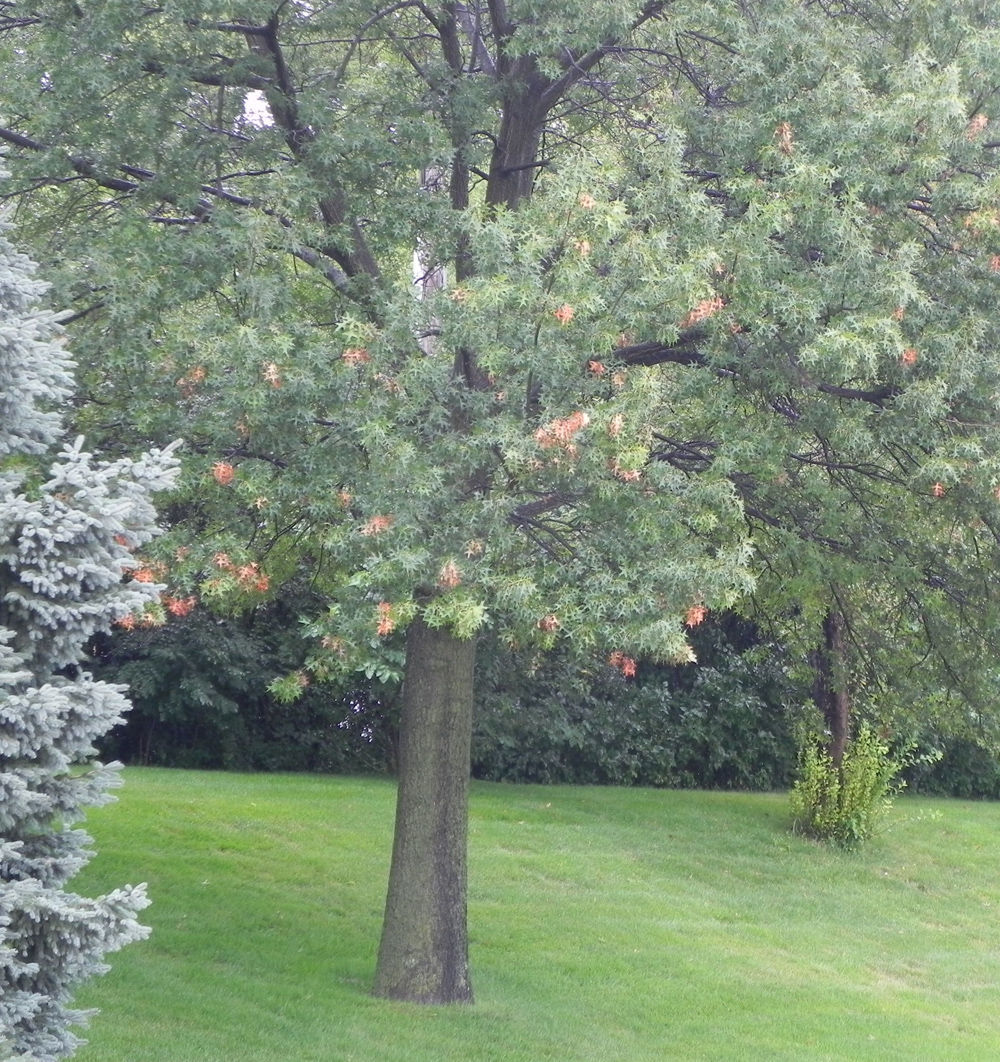 Collecting and discarding any dead twigs that fall from infested trees will minimize insect populations next year.

Every summer an unusual type of insect makes an appearance in many landscapes. Actually, there is a small group of insects, called twig girdlers or twig pruners, that cause similar damage in a variety of trees.

But fortunately, these insects are not a serious problem and their activity doesn't have serious consequences for the trees. But their presence can be seen as small twigs at branch tips turn brown and die.

In eastern Nebraska, the most common twig girdler is Oncideres cingulata. This group of insects are known as longhorn beetles due to the length of the adult insects' antennae. They have one generation per year and at maturity are grayish-brown, stout-bodied beetles, about thee-quarter inches long. Adults appear in late summer from mid-August through early October.

The female beetle prepares to lay eggs by chewing through the bark of a small twig, in a grooved channel that goes all the way around the twig, girdling it. She lays an egg in the girdled twig section, which quickly wilts, turns brown and dies.

Larvae, which are creamy white, grub-like borers, cannot survive in healthy wood, but do fine in the dead twig even after it falls from the tree. When twigs fall from the tree, a close inspection of the twig’s cut end looks a lot like beaver damage, in miniature.

Another similar insect is the twig pruner, Anelaphus parallelus, which also has one generation per year, but requires two years to complete its lifecycle. Adults are a longhorn beetle, reddish-brown with light tan markings, about a half- to three-quarter inches long. In spring adults emerge and females lay eggs in and around bud clusters near the tips of small twigs and branches. Larvae hatch within a few days and tunnel into the twig. Young insects feed within the twig’s wood. In fall they tunnel toward the base of the twig where they overwinter.

In the second year, larvae continue to feed until late summer when they begin making concentric cuts in the wood of the twig, spiraling outward until they almost reach the outer bark. The larvae then retreats into the outer portion of the twig. The larvae overwinters inside the twig, pupating and emerging as an adult the following spring.

On close inspection, twigs severed by the twig pruner will have ragged outer edges but a smooth concave inner surface. Tunneling will also be evident. Affected twigs may range in diameter from one-half inch to two inches.

Twigs girdled by any of these insects may stay attached to the main branch for several weeks or be broken out of the tree by wind at any time during fall or winter. Tunneling may or may not be evident in twigs, depending on which insect is present. Homeowners are usually first aware of these insects, due to the many dead twigs that appear at branch tips in late summer.

Heavily infested mature trees can look a little ragged, but the damage is not a serious health problem so chemical control is not recommended or practical. The best way to minimize insect activity is to remove, and burn or discard twigs in fall and spring that contain the developing larvae.

With our home & garden newsletter!

Fertilization is a critical step in maintaining a healthy, vigorous turf. Applying nitrogen fertilizer in fall promotes turf recovery, but the…

Sarah Browning: Fall the perfect time to get composting

Fall leaves will soon be coming down, providing gardeners with an abundance of organic matter. Why not put these materials to good use this fa…

Late summer can be a ho-hum time of year for landscape perennials. Colorful flowers of the early spring and summer bloomers are long-gone and …

It's been hot! And windy. In unwatered portions of the landscape you may be seeing cracked soil -- a good indication conditions are dry.

Garden professionals often talk about sanitation as a way to manage insect and disease problems in a garden or landscape. But what exactly is …

Sarah Browning: Fall is time to get flowering bulbs planted

Planting flowering bulbs is a fall tradition for many gardeners, and there is still plenty of time to get your bulbs in the ground this fall.

Winter is a difficult season for roses. Rapid temperature changes, sometimes as much as 20 to 30 degrees in 24 hours, are very hard on plants.…

Raspberry crowns live for many years, but their canes are biennial meaning they live for two years. Each year new shoots grow from buds in the crown.

What planting zone do you live in?

What planting zone do you live in?

These Subscription Boxes are Actually Worth the Money

These Subscription Boxes are Actually Worth the Money

An adult twig girdler leaves a telltale pattern on a twig.

Collecting and discarding any dead twigs that fall from infested trees will minimize insect populations next year.