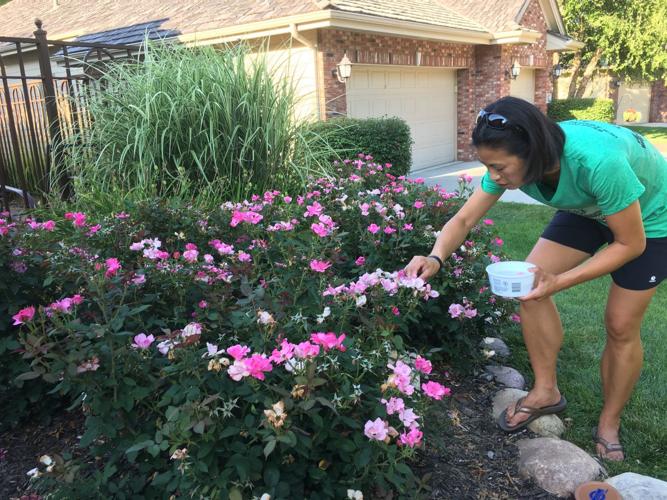 If the plants being attacked are small, like these roses, scouting for beetles daily, handpicking them and dropping them into a solution of soapy water can be an effective method of control.

Defoliated plants – in some cases entire trees - look horrible, and no matter what you do they seem to keep coming. So, what’s the best strategy for managing them?

Below are some tips to help minimize damage in your landscape. But first,  realize that when Japanese beetles first come into an area, beetle numbers build for about 5 to 8 years, reaching a peak level.

After that time, beetle populations drop and, although they never disappear, damage becomes less severe. So there is light at the end of the tunnel in that the amount of plant damage seen during the peak years will lessen naturally in time.

Both adult and immature Japanese beetles are damaging to landscapes. The adult beetles are shaped similar to our common June beetles, but a little smaller -- about a half-inch long. Their head and thorax are metallic green, their wing covers copper brown. But you have to look closely sometimes to see these colors. At first glance they often just appear dark brown. They also have a series of five white tufts of hairs on both sides of their abdomen, distinguishing them from a native insect called the false Japanese beetle or spring rose beetle.

Immature Japanese beetles are similar to white grubs. They are creamy white colored with a brown head and three pairs of legs on the front part of their body. As immature insects, the white grubs feed on plant roots and are a frequent lawn pest. Root feeding causes browning and death of the grass.

Adults feed during the day, preferring hot weather and plants in full sun. They have chewing mouthparts and consume tissue between the leaf veins, leaving behind a lacy or skeletonized leaf that quickly turns brown.

Don’t put out the welcome mat

Do not use Japanese beetle traps advertised in gardening magazines or found at some hardware stores. Research has shown these traps attract many more insects than they catch, resulting in more harm than good for your landscape.

Discouraging the Use of Traps for Japanese Beetle Control, https://lancaster.unl.edu/pest/resources/japanesebeetletraps.shtml

Linden, crabapple, cherries and birch are favored tree hosts, and adult feeding damage is often severe. Fortunately, healthy trees tolerate this loss of foliage well and will not be killed. Even if the entire canopy of leaves is skeletonized, plants will re-leaf next year since the underlying twigs and branches are not damaged. Don’t overreact by pruning out branches or removing entire trees.

Less favored trees can be planted to minimize problems. That doesn’t mean they will have no beetle damage, but it will not be severe. These include boxelder maple; shagbark hickory; Japanese tree lilac; black, northern red, scarlet or white oak; redbud; sweetgum or tuliptree.

If Japanese beetle damage becomes an annual event in your landscape, consider swapping out the plants they feast on for less preferred ornamentals. If only one or two plants in your landscape are affected, handpick beetles and drop them into a can of soapy water.

Before applying insecticides for control on blooming plants, understand how to use the product correctly and not damage pollinators. Follow all label directions; do not spray on windy days or during the day when pollinators are present. Instead, spray late in the day, near dusk. As always when using pesticides, read and follow all label directions including the use of personal protective equipment.

The organic pesticides Neem and Pyola will give some control of the adult beetles, but only for about 3-7 days. However, Neem and Azadiractin products can be effective repellants, reducing foliage damage when applied regularly (but no more than weekly).

When using conventional insecticides, typically two applications during peak adult flight periods, late June through early August, are needed for control. The first application should be made before plant damage becomes intolerable, but when adult beetles are abundant.

Carbaryl, bifenthrin, cyfluthrin, permethrin and lambda-cyfluthrin provide about 2 weeks of control following a thorough application. Follow the label restrictions for use on food crops and harvest timing after application.

At this point in the season, it’s too late to use systemic products like imidacloprid as a soil drench. These products require time to be taken up by the plant and should have been applied around Mother’s Day. They can be used next year if you have trees or shrubs suffering significant damage. These products cannot be used on Linden trees.

Adults lay eggs in the soil for about a 4-to 6-week period beginning in late June. Eggs hatch out 10 to 14 days later, and tiny grubs begin feeding on turf roots. Most turf damage appears in late summer, from mid-August through September.

Turf products for the control of our common white grub also provide control of Japanese beetle grubs and should be applied from mid- to late-June. If extensive damage occurs and grub control products were not applied earlier in the summer, then Dylox works well in late summer as a rescue treatment.

Many urban landscapes have a forlorn narrow planting strip between the curb and sidewalk, often known as a “hell strip.”

Iris are one of the most popular and beautiful of garden flowers. With the wide range in plant type, size and adaptation, there is an iris for…

Sarah Browning: With care, asparagus can live a long time

As a long-lived perennial, it's not uncommon for asparagus plants to live for 12 to 15 years or longer. So it's worth your time to take care o…

Sarah Browning: Time is now to thin fruit on trees

Fruit trees in the home orchard often set abundant crops if spring pollination conditions are good, and most home gardeners do not thin fruit …

Seasoned to Taste: Use fish for fresh kebabs

A plethora of potlucks! How lucky be we wallflowers, whose typically empty calendars are suddenly dotted with celebratory and contributory get…

The best time to seed cool season grasses, such as Kentucky bluegrass and tall fescue, is between Aug. 15 and Sept. 15, so its time to start y…

Gooseberries are one of those unusual fruits not grown by many home gardeners. But they certainly are worth consideration for home fruit produ…

Do you have beautiful herbs in your garden and want to preserve them for use this winter? August and September are the time to get started dry…

These plants are toxic for your dogs and cats

If the plants being attacked are small, like these roses, scouting for beetles daily, handpicking them and dropping them into a solution of soapy water can be an effective method of control.