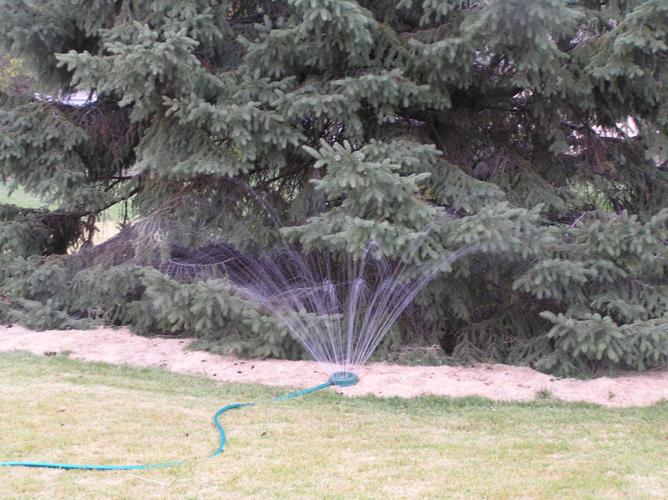 Even mature trees can benefit from fall watering. 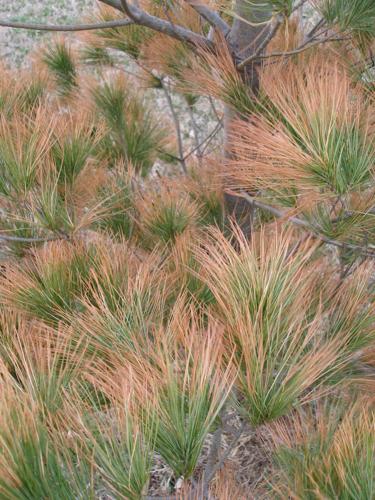 Brown needles on a white pine are a sign of dessication. It occurs when the tree loses more moisture than its roots can gather.

This summer has been hot, hot, hot! Lincoln had 54, 90-plus degree days from May through Aug. 31. In unwatered portions of the landscape many are seeing cracked soil -- a good indication conditions are dry.

One of the most common issues right now at the Nebraska Extension office is tree and shrub leaf problems resulting from drought stress. If your plant has been developing brown leaf splotches which started to appear in July or August, it's a good bet you have leaf scorch.

Leaf scorching is one of the most common symptoms of drought stress -- a uniform yellowing or browning around leaf edges or the tips of evergreen needles. But sometimes leaf scorch can be blotchy in appearance and scattered throughout the leaves, not an even browning around the edges. Additional signs of drought stress include wilting, branch and twig death or plant death.

Trees and shrubs not fully hydrated going into winter are also prone to winter desiccation, a common type of winter injury that occurs when the amount of water lost by plants exceeds the amount picked up by the roots.

Symptoms seen in spring include brown foliage on evergreens, particularly arborvitae, boxwood and holly, but sometimes also pine, fir and yew. The extent of the symptoms can vary from brown needle tips on one side of the plant, to one or two brown branches, to an entire dead plant.

Injury is found on the outer portion of the branches and is often most severe on the side of the tree facing the wind or a source of radiated heat, such as a south or west-facing brick wall or street.

Dry conditions from September 2021 through April resulted in damage or death to many plants found early this year. Aside from the common winter-damage susceptible plants mentioned above, we unexpectedly saw damage in eastern red cedar and spruce in windbreaks.

Fortunately, plant damage or death from dry conditions is preventable. Fall is a time for plants to replace the moisture reserves lost during summer. Deep-watering plants now through December, when rain or snow doesn't occur, may mean the difference between healthy vigorous plants, stressed & struggling or possibly even dead plants next spring.

Begin by applying a 3 to 6 foot diameter ring of mulch around the base of trees and shrubs, with 3 to 4 inches of an organic material, like coarse wood chips, to help conserve soil moisture. Make sure it's a flat pancake-like layer of mulch, not piled up like a volcano against the plant's bark. Keep it far enough away that it doesn't touch the tree's trunk.

During fall, plants should receive one inch of water per week, either through irrigation or rain.

In early fall, when conditions are dry and temperatures are in the 80s, two deep soakings per month is usually adequate for mature trees.

Apply water deeply, moistening the soil to a depth of about 12 to 18 inches. Use a long-bladed screwdriver or piece of rebar to check the depth of water penetration. Once you've reached dry soil, it will be much harder to push the probe into the ground. Water the entire area underneath the tree’s drip-line if possible.

When temperatures cool off into the 70s or below, aim for one deep soaking per month.

If using a sprinkler, let it run in a low pattern in one area until the top 12 to 18 inches of soil is moistened then move it as needed to water the entire area underneath the tree’s canopy or over a shrub’s root zone. Using a hose and sprinkler is the best practice for late season watering and eliminates the worry over when to winterize an in-ground irrigation system.

Trees, shrubs and ornamentals recently planted or transplanted need extra attention. Make sure new plants are mulched as described above. Research has shown a 2 to 3 inch application of wood chip mulch nearly doubles plant growth in the first few years after planting by eliminating competition from weeds or grass and conserving soil moisture.

Tree roots, especially the small, water-absorbing roots, are easily damaged during transplanting. For sufficient water uptake to occur, the root ball of a newly planted tree must be kept moist but not saturated.

Monitor the moisture in the root ball daily, and water as needed so it doesn’t dry out. The best way to do this is by sticking your finger into the soil of the root ball to determine its moisture level. When watering, be sure to moisten the area outside the root ball too, this encourages root growth into surrounding soil.

A watering basin 2 to 3 inches deep and 3 to 4 feet in diameter, created around the base of young trees at planting time, will hold water until it can percolate into the soil.

Here are a few final things to keep in mind to make your landscape plants as healthy as possible this fall.

Don't fertilize now. Trees and shrubs need to become hardened off before going into winter. Succulent, new growth resulting from fertilization is much more susceptible to winter burn.

Don't prune evergreens like yew or boxwood now, instead wait until they are dormant. Pruning is an invigorating process which stimulates new growth. Whenever pruning is done during the growing season, new growth will quickly follow. Late summer/early fall pruning of evergreens leads to the development of new growth.

Without enough time to properly harden off, the new growth is very prone to damage from freezing temperatures in October/November. If pruning needs to be done before winter, wait until plants are fully dormant in mid to late November. The exception to this rule is removal of dead, diseased or damaged branches, which can be done at any time.

Watch now: Art in the Garden

Sarah Browning: Making the most of your mums

Fall is the perfect time to pick and plant mums. Growers can see them in bloom and add that pop of color to the flower bed immediately.

Survey: Most people will 'try anything' to lose weight

Study: Is your laptop making you lie more?

Study: Is your laptop making you lie more?

Even mature trees can benefit from fall watering.

Brown needles on a white pine are a sign of dessication. It occurs when the tree loses more moisture than its roots can gather.