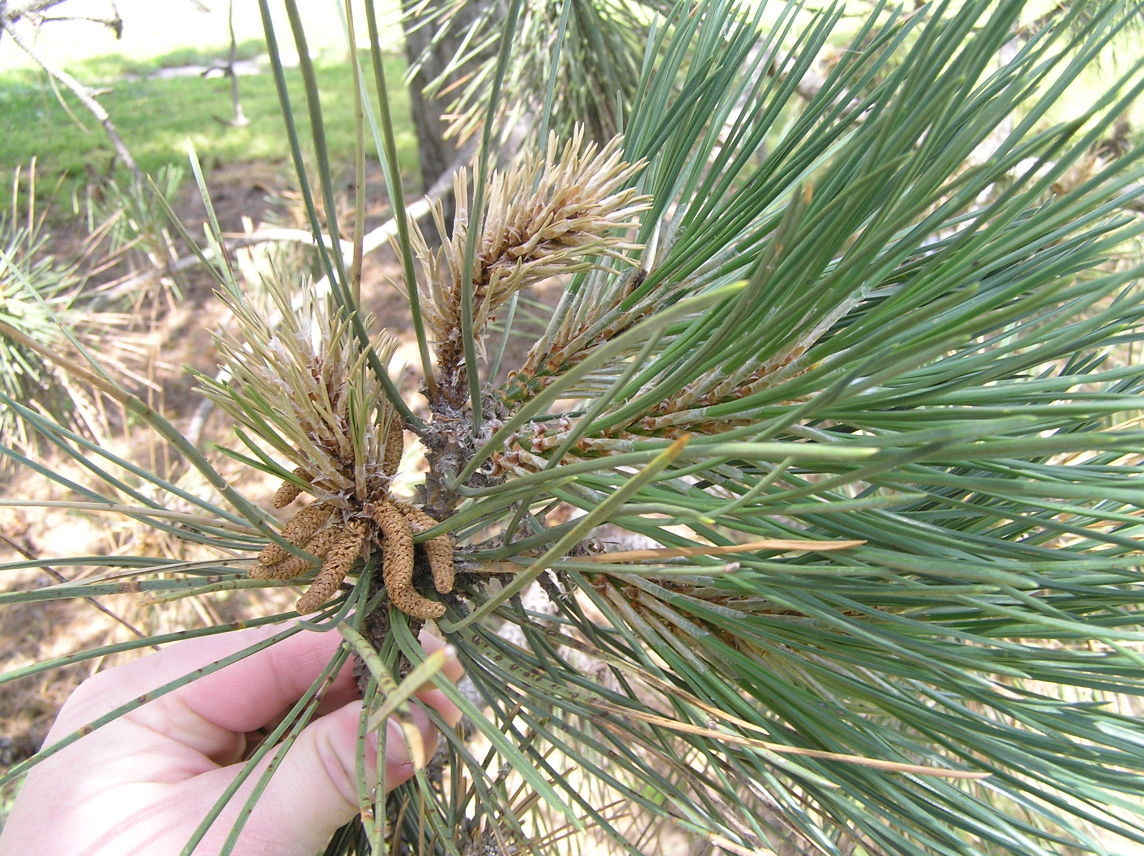 This is a close-up of new shoots killed by Diplodia infection. 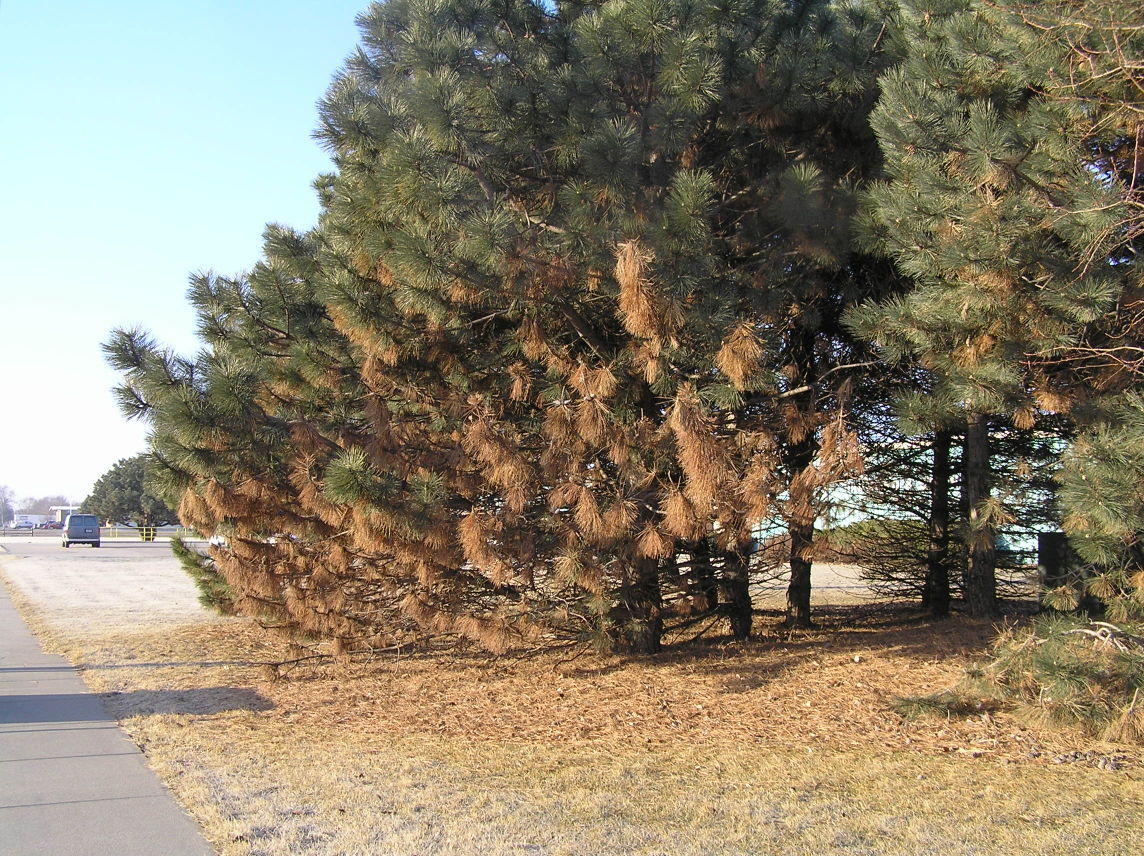 Branches that have been infected several years in a row often die back completely.

Browning and death of branch tips are quite common in older, well-established pine plantings. Austrian pine is the most severely affected, but this type of damage also can be found in Ponderosa, Scotch and Mugo pine.

The most conspicuous symptom of Diplodia tip blight is stunted new shoots with short, brown needles still partially encased in their sheath. Infected shoots are quickly killed and may be located anywhere in the tree's canopy, although damage is generally first evident and most severe in the lower branches.

After two or three successive years of infection, tree tops also may be extensively damaged. Repeated infections reduce growth and deform trees. Branches that have been infected several years in a row often die back completely.

Small, black, pimplelike structures develop at the base of infected needles and on the backside of pinecone scales. These structures produce additional fungal spores that can reinfect the tree.

Diplodia tip blight can be confused with pine tip moth damage, however, the larvae or tunnels will be found within shoots when they are slit open if these insects are causing the damage.

Damage should also not be confused with pine wilt, a disease caused by trunk-dwelling nematodes, which is killing many pines across Nebraska. Pine wilt primarily affects Scotch pine trees and kills the entire tree very quickly, usually within a matter of two or three months.

New shoots are most susceptible during a two-week period starting when the buds begin to open and continue to be susceptible through mid-June. Infections are worse during years with very wet spring conditions, which promotes disease infection. High humidity also promotes the germination of spores. Fungus spores are dispersed primarily on rain splash from March to October.

The fungicide brand names listed above are examples of available products. Other formulations of these chemicals will will be effective in controlling this disease and can be used as long as they are labeled for use on evergreen trees.

Always read and follow all label directions carefully before making any pesticide application.

Sarah Browning is an Extension Educator with University of Nebraska- Lincoln Extension in Lancaster County. Reach her at 402-441-7180; 444 Cherrycreek Road, Suite A, Lincoln, NE 68528; or sbrowning2@unl.edu.

Watch Now: How to reduce your stress levels

Winter doesn't mean the end of vegetable production if you have the right setup and pick the right plants.

The 50 best small towns to live in across the US

Are you looking for a small town with good schools, tree-lined streets, and community events for the whole family? Here's a look at some of the best small towns across the country.

Sarah Browning: From gladiolas to greens

Here are three more winning plants to bring joy to the garden and gardeners.

Refinishing or relining a bathtub: How to determine if it's right for you

Refinishing or relining a bathtub can make it look brand new — and you'll save money, to boot.

Over the next few weeks, we’ll look at plants -- annuals, perennials, edibles, trees and shrubs – to consider for addition to your gardens this summer.

Ask the Builder: Remodeling a bathtub creates a problem

Over the weekend I got Steve out of a big jam. He lives near Pittsburgh, and his wife decided it was time to tear out an outdated platform bathtub. She wanted a new sleek soaking tub shaped like an elongated giant vessel sink. I must admit, they look amazing; I installed one in my daughter’s new home two years ago. They’re also very comfortable.

This is a close-up of new shoots killed by Diplodia infection.

Branches that have been infected several years in a row often die back completely.