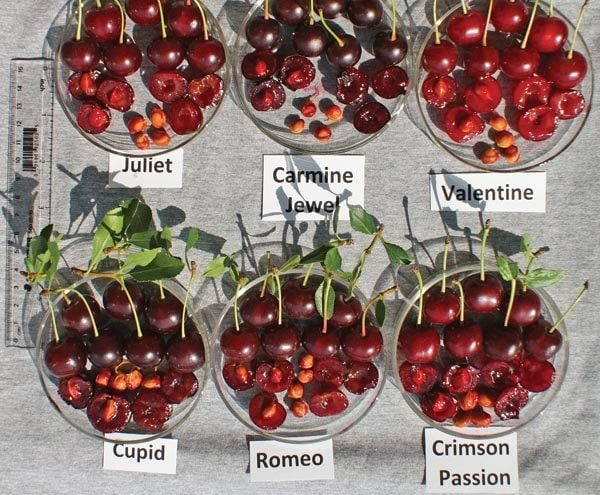 A variety of cherries can be grown in Nebraska.

Cherries have been a favored fruit for centuries, eaten by people since before recorded history. Sweet cherries, Prunus avium, are native throughout most of Europe, western Asia and parts of northern Africa. Naturally, they have been used extensively in holiday cooking through the years.

But tart cherries, Prunus cerasus, are the most common and well-adapted cherry grown in Nebraska. Of the tart cherries, “Montmorency” is the longtime Midwest standard. “Montmorency” cherry grows into a medium-sized tree and has been in cultivation for over 400 years. Other varieties of tart cherry include “Evan,” “Rose” and a recent release named “Balaton.” There is also a naturally dwarf variety “North Star” available, which is extremely hardy and thrives in the harsh Midwest environment. But a new group of cherries, called bush cherries, offers great fruit, even better winter hardiness and much easier picking.

"North Star." The result of these crosses was a shrub form of tart cherry that is very hardy and has the high-quality fruit characteristics of "North Star" with increased sugar content.

The first of these crosses released was named “Carmine Jewel.” It reaches a height of 6 feet and a width of 5 to 6 feet. Spacing between plants should be 6 feet. “Carmine Jewel” is self-pollinating, meaning the flowers from the bush will pollinate each other, so technically a second pollinating plant is not needed. However, a second pollinating type of bush cherry can increase fruit set. Fruit yields for established plants can approach 30 pounds.

The newest developments out of Canada include five varieties that were released as the Romance Series in 2005. These include “Juliet,” “Valentine,” “Cupid,” “Romeo” and “Crimson Passion.” All five varieties have larger fruit with a higher sugar content than “Montmorency” and other tree forms of tart cherries. These varieties are not yet readily available in the United States.

Talk with your local garden center about ordering these cherry varieties, or check with these online garden retailers for spring availability.

When planting bush cherries and other long-term crops, it is always important to begin with a soil test and correct any deficiencies prior to planting. Bush cherries require much less space than the tree types. Row spacing of 6 to 7 feet, from center of plant to center of plant, allows easy access for harvest and promotes good air movement to help reduce disease incidence.

Bush cherries have relatively low-fertility requirements, and most Midwestern soils have adequate fertility levels unless the soil test indicates otherwise. If fertilization is warranted, it is important to fertilize early in the growing season during the period of rapid growth. Later-season fertilization may promote growth too late in the season, and possibly result in winter injury to the plant.

Watering is extremely important early in the development of the plant. The most common plant size available from retail nurseries is 1-year-old rooted cuttings with a limited root system. Because of this small initial root system, it is important to make sure plants have adequate soil moisture available for growth during establishment. Adequate water is also important in subsequent years for good bud set, plant vigor and fruit development. Conserving soil moisture through the use of mulch can reduce the need for irrigation and help in the control of weeds, which will sap soil moisture away from the cherries.

Bush forms of cherries begin producing fruit sooner than the tree forms. Fruit production begins at the third year. Full production is achieved during the fifth year, if the plants have experienced normal growing conditions. Twenty to 30 pounds of fruit can be expected per plant once the cherries are established. Depending on the variety, harvest can be as early as late July or as late as September.

Bush cherries have few disease and insect pests. The primary disease issue to watch out for is cherry leaf spot. Cherry leaf spot is a fungal disease, causing black leaf spots, yellowing of infected leaves and leaf drop. The black spots contain fungal spores. Heavy infestations can result in total defoliation of the tree soon after harvest. It is important not to let this happen, as it is extremely stressful to the plant, can reduce winter hardiness and greatly affects the following year’s crop. Fungicide application beginning early in the season easily will control this disease.

Cherry maggots can be an issue many years and are the larval form of a small fly. These small larva are found inside the fruit itself. Spraying to control this pest must begin early in the season to insure worm free fruit. Consult the Fruit Spray Schedules for the Homeowner, extension.missouri.edu/publications/DisplayPub.aspx?P=G6010, for recommendations on control of all your cherry insect and disease problems.

Bush cherries can be a highly productive addition to a home orchard or landscape. Their versatility allows them to be planted in a variety of settings. They can be an integral part of your formal or edible landscape because of their beautiful flowers and fruit. You can plant them in a windbreak enhancing the structure while supplying delicious cherries to you and wildlife. They are well worth the effort.

Watch Now: Don't take a deep breath in this city

Watch Now: Don't take a deep breath in this city

Tips to help you survive RVing with your kids

Tips to help you survive RVing with your kids

Should you exercise when you feel sick?

Should you exercise when you feel sick?

The Apple Corps Club, a throwback on Lincoln's East Campus, thrives in a new century

In 1975, a group of women in the East Campus neighborhood decided to form an extension club. They learned the art of housekeeping and a whole lot more.

Deadhead your flowers, and they'll repay you with more blooms

The flowers can be used for family reunions, weddings and other occasions, but Nikki Sjuts said they only keep the garden open around Memorial Day because that is the height of the peony season.

Nothing is more disappointing to the home vegetable gardener than to raise a tomato plant, finally have it loaded with fruit, when suddenly it…

After taking a year off due to the pandemic, the Garden Club of Lincoln has scheduled its annual Garden Tour for Saturday, June 12, from 9 a.m…

How to choose the best spray faucet for your kitchen

Many pull-down and pullout kitchen faucets have different spray head features from which to choose. Here are some options to consider.

When is a house art?

I like art, and I like art in my home. My art isn’t fancy or valuable, but it gives me enjoyment and pleasure, and may evoke memories. To me, …

Earth Talk: What is a 'pollinator lawn' and how can I make one?

Turning your own lawn into a pollinator or “bee” lawn can help restore the kinds of natural habitat no longer available to pollinators.

If your landscape has a history of bagworm problems, it’s time to start looking for the next generation of young insects. They will soon be hatching.

A variety of cherries can be grown in Nebraska.