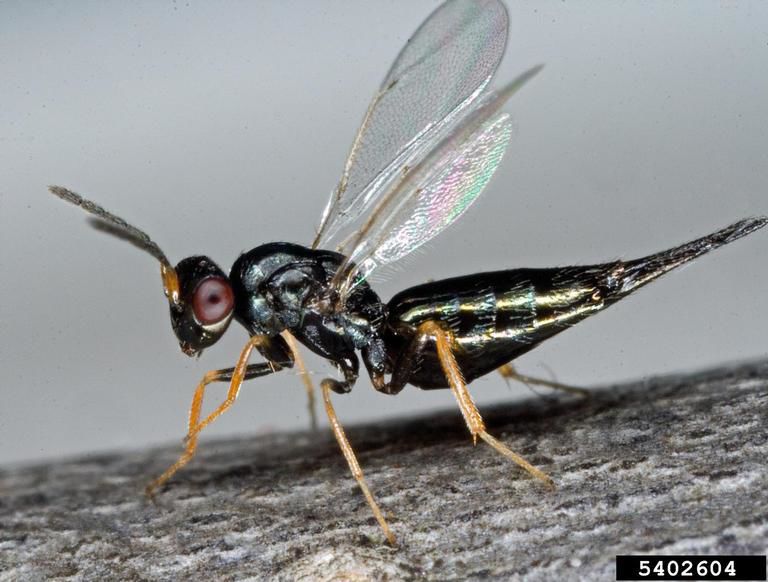 The Tetrastichus planipennisi wasp lays eggs in the larvae of the emerald ash borer. 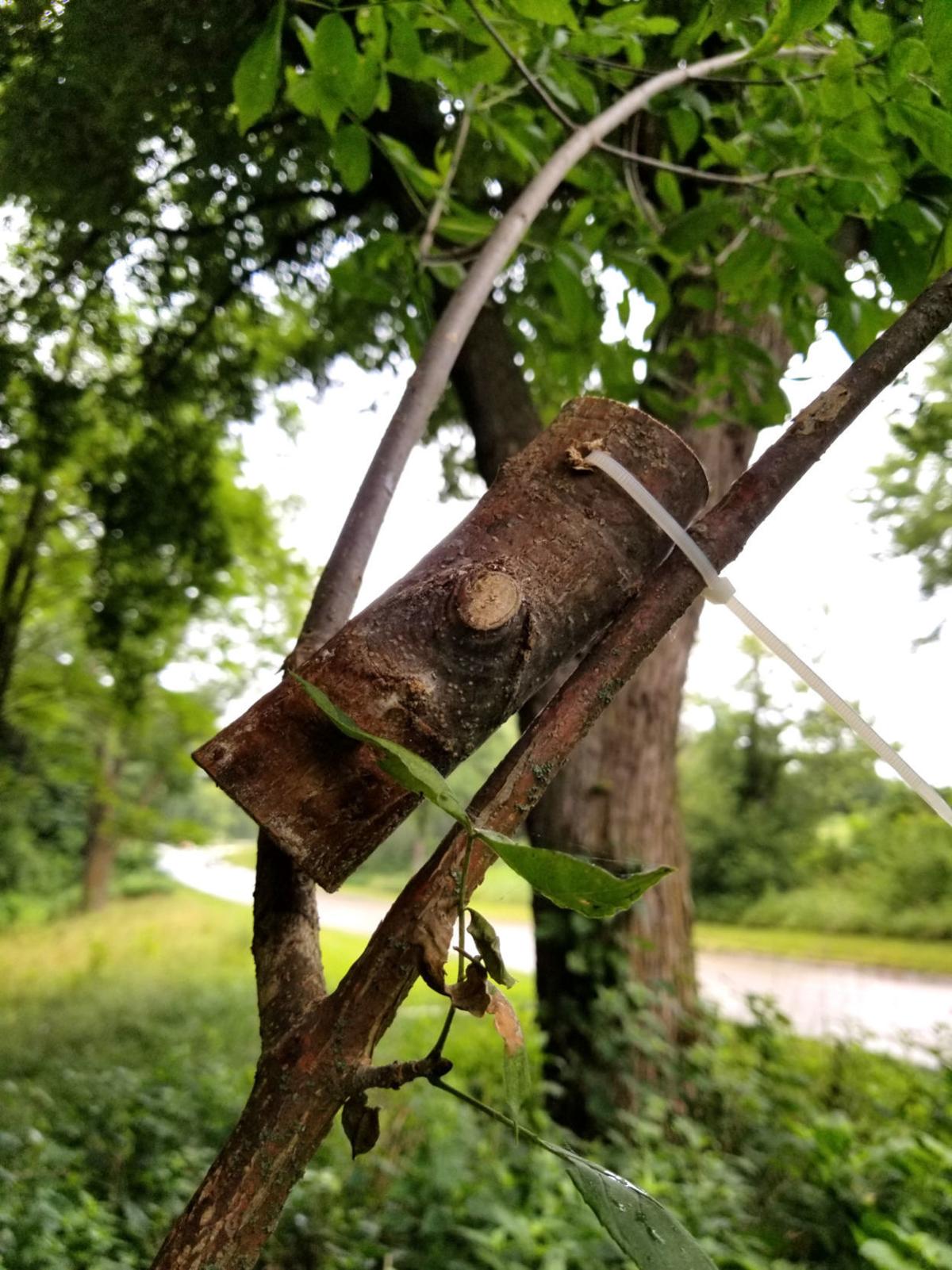 A piece of ash branch, infested with the emerald ash borer and injected with the eggs of the tetrastichus planipennisi wasp, was attached to an ash tree at Platte River State Park last summer. 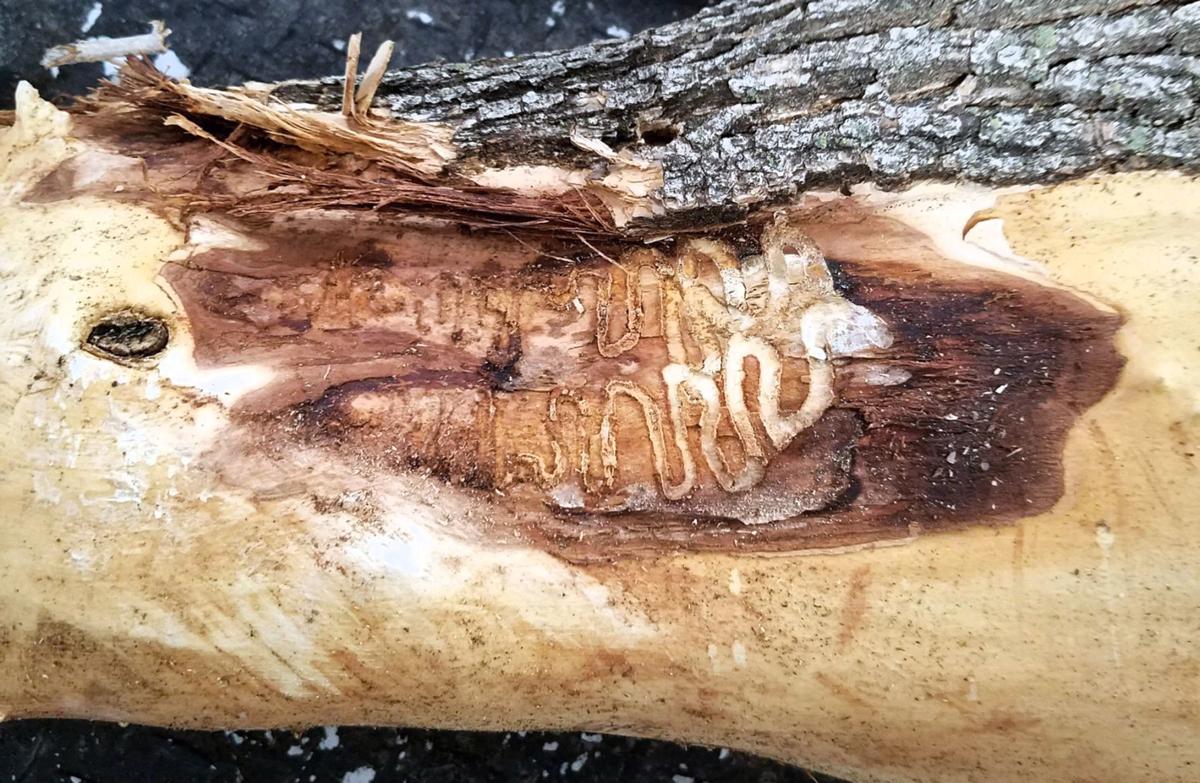 City tree crews discovered the first signs of emerald ash borer infestation in a tree near 37th and F streets.

One of the newest members of Lincoln’s insect family is a little wasp with a big name and no desire for human flesh.

But it can’t live without the emerald ash borer.

The Tetrastichus planipennisi is an underhanded killer, penetrating the bark of an infected ash tree with its ovipositor — the stinger on other species — to lay eggs in the larvae of the emerald ash borer.

“Then the eggs hatch,” said Dave Olson, a forest health specialist with the Nebraska Forest Service. “And they eat the ash borer from the inside-out.”

Its cousin, Oobius agrili, likes its borers even younger: It injects its own egg inside an ash borer egg, eventually hatching, growing and killing its host.

In both cases, the parasitic wasps mature — larvae, pupae, adulthood — then fly away, looking for more victims, continuing the cycle.

And the brutality of this bug-eat-bug world is now being waged in Lincoln and nearby state parks, introduced to the area by the U.S. Department of Agriculture in an attempt to slow the spread of the emerald ash borer.

The Asian beetle, about the size of a cooked grain of rice, was first confirmed in North America in the early 2000s and has been eating its way west across the U.S. since, piling up massive damage.

The insect had already killed tens of millions of ash trees — with an estimated value of $11 million — by the time it reached Nebraska, first confirmed in a Douglas County tree in 2016. It landed in Lancaster County in 2018, caught in a trap near Pioneers Park, and was discovered infesting trees in Lincoln last spring.

It’s a lethal little bug, and Lincoln’s estimated 65,000 public and private ash trees are vulnerable. The city has already started removing and replacing most of its 14,000 trees from parks, golf courses and along streets, and will attempt to prolong the lives of some with chemical treatments.

The stingless wasps were the federal government’s idea. The USDA’s Plant Protection and Quarantine program approached the state last year, and the Forest Service identified a handful of spots that could benefit from biocontrol: Pioneers Park, Mahoney and Platte River state parks and Fremont Lakes State Recreation Area.

In some cases, the lab delivers a Trojan tree limb — a branch cutting already infested with ash borer and injected with wasp larvae. Once in the field, the branch is attached to a tree that shows signs of the ash borer, and the adult wasps emerge from the cutting and start hunting in the host tree.

It’s too soon to see results, Shayne Galford, the USDA’s state plant health director for Nebraska and Kansas, said in an email. But officials will return to the release sites to introduce more wasps this year, and check for established populations in 2021. They could also add more sites, he said.

The new weapon in the war on emerald ash borers won’t stop their spread, said Olson, with the state forest service. But it could crimp it.

“It’s not going to be a silver bullet. The real goal is to get these predators set up so in a few years the emerald ash borer has additional pressure on it.”

In war against ash borer, a side skirmish erupts in east Lincoln

They found the first bug in August, in a treetop trap they set northwest of Pioneers Park.

Last year, the cabins were largely unaffected by flooding. But this year, in an attempt to prevent that flooding from happening again, water was diverted away from the road, which pushed it back toward the cabins near Fremont.

Lincoln public stamp show to be held this weekend

Annual Polar Plunge not so polar this time around

The annual Polar Plunge took place Saturday morning, but the weather was significantly warmer than normal for the event.

Nearly 60 Nebraskans have contacted the state since Friday, reporting they received unsolicited seeds in the mail.

The emerald ash borer, a beetle that destroys ash tree populations, has been confirmed in Seward and Washington counties, according to the Neb…

The Lincoln-based foundation planted 50 trees Thursday in Mahoney Park, and will help give away 250 trees to the public next week.

The Tetrastichus planipennisi wasp lays eggs in the larvae of the emerald ash borer.

A piece of ash branch, infested with the emerald ash borer and injected with the eggs of the tetrastichus planipennisi wasp, was attached to an ash tree at Platte River State Park last summer.

City tree crews discovered the first signs of emerald ash borer infestation in a tree near 37th and F streets.