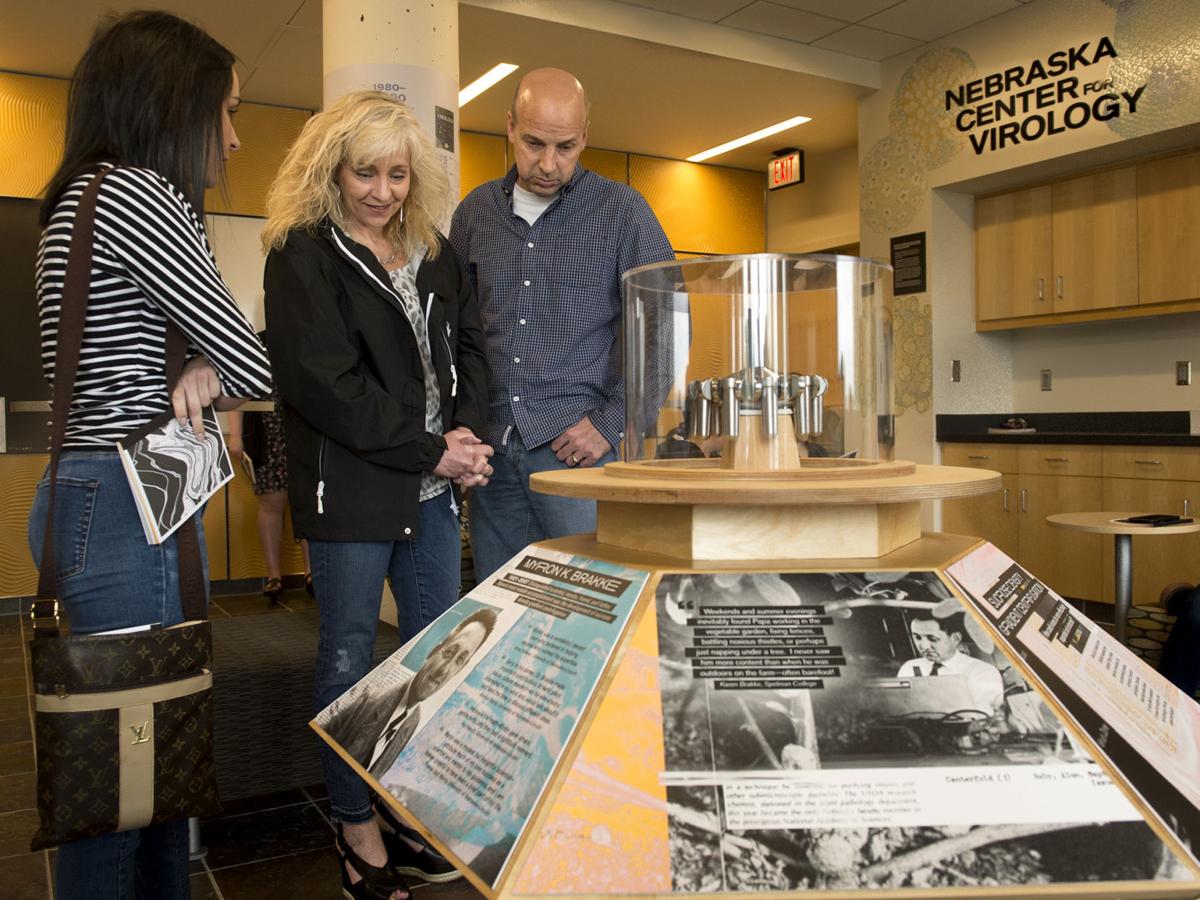 University of Nebraska-Lincoln senior Monica Zurek (left) on Wednesday shows her parents, Shelley and Terry Zurek, an exhibit she helped create to mark the accomplishments of Myron Brakke that's located in the Nebraska Center for Virology at the Morrison Center on UNL's East Campus. 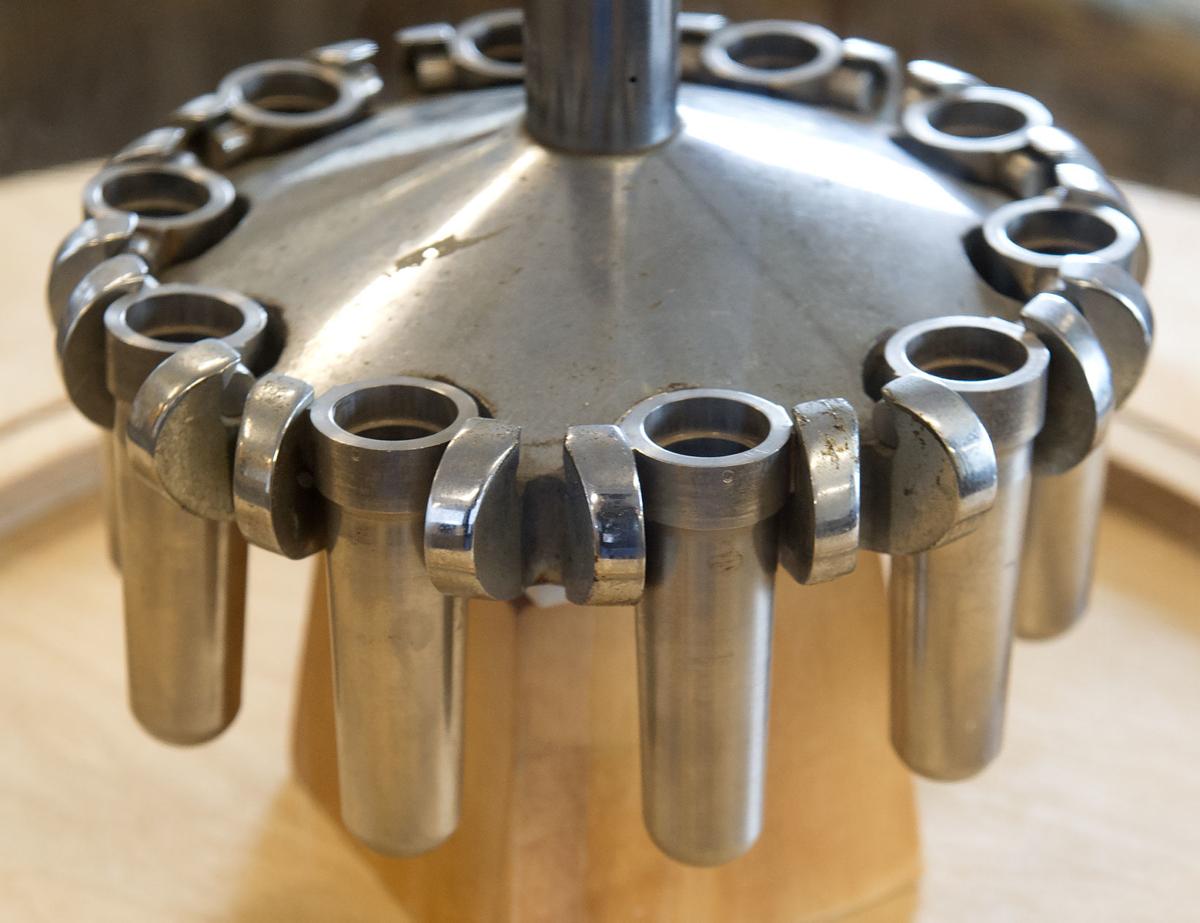 A centrifuge rotor sits atop an exhibit honoring the inventions of Myron Brakke, the late University of Nebraska-Lincoln professor of plant pathology.

Myron Brakke revolutionized biochemistry and molecular biology with ingenuity and a scientist's keen eye, devising a technique that remains a standard practice in laboratories around the world.

Sucrose density gradient centrifugation, or the isolation and purification of viruses from other biological matter using a specialized spinning rotor, won Brakke admission into the National Academy of Sciences, the first Nebraskan granted that honor.

But it was the late University of Nebraska-Lincoln professor of plant pathology's easy-going nature and willingness to offer advice or analyze a problem for a colleague that earned respect and admiration from his peers.

Brakke, who died in 2007, will be memorialized inside the Ken Morrison Life Sciences Research Center on UNL's East Campus, the headquarters of the Nebraska Center for Virology, where his technique is still used to this day.

Instead of the fixed-angle tubes in older centrifuge rotors, Brakke's rotor swung as the centrifuge rotated tens of thousands of times per minute — think the spin cycle on a washing machine — in order to settle viruses or other molecules through a sugary syrup.

Brakke discovered the rate of settling depended on the size and weight of the specific particle, and that particles of similar sizes and shapes would settle at a uniform depth, which allowed him to suck them out of the syrup and into a syringe with a needle for study.

The interactive exhibit, designed and built by a first-of-its-kind class at UNL made up of students across a wide range of disciplines, features Brakke's original swinging bucket centrifuge rotor as its centerpiece. He designed the centrifuge rotor when he was a researcher at the Rockefeller Institute of Medical Research.

"Myron always kept the rotor," said Jim Van Etten, a UNL professor of plant pathology and member of the National Academy of Sciences himself, who worked with and learned from Brakke for more than three decades.

A departmental heirloom of sorts, the rotor was handed down from colleague to colleague upon retirement, until research professor Dave Dunigan suggested the invention be put on display to tell the story of both Brakke and the study of virology in Nebraska.

As Dunigan thought about how to honor Brakke, Judy Diamond, a professor and curator at the University of Nebraska State Museum at Morrill Hall, was developing a new course to give students "real world, practical experience in communicating about science."

The new course, simply called "Exhibits," brought together graduate and undergraduate students enrolled in graphic design, advertising and public relations, earth and atmospheric sciences and anthropology on the semester-long project.

Students researched and designed the display, created an accompanying website, and reached out to researchers for testimonials about Brakke's invention.

They also built it themselves at Nebraska Innovation Studio using funds donated from Brakke's former colleagues.

Jinell Carslin, a senior graphic design major who designed the stand and case the rotor rests upon, said she was inspired by an idea thrown out in class to make the exhibit interactive by spinning the rotor themselves.

"As part of the design, we wanted the interaction to give an understanding of how it works, whether it was a button or a crank or a wheel," Carslin said. "Someone mentioned Lazy Susan in class and I just kind of ran with it. I came up with a design and sent it off to the production team to be built."

While the exhibit will be a permanent fixture at the Morrison Center, Dunigan said it can be moved to showcase both Brakke and the UNL students' work across campus.

Dunigan said he hopes the new exhibit inspires more collaboration between scientists and communicators to close what he called "the gap of knowledge."

"I think we need people who can communicate the need for science, the importance of science and let people understand the complexity, but also what it means to them personally," he said.

The poster came off the printer April 6 with colorful data showing how gravity loads, magnetic fields and seismic activity dating to 1979 coul…

The tale of how Greek warrior Diomedes wounded two Olympic gods in a single day concluded shortly after 11 a.m., leading straight into the tel…

More turnover among UNL's deans; leader of College of Arts and Sciences resigns

Joseph Francisco will resign as dean of the College of Arts and Sciences at the University of Nebraska-Lincoln on June 30, four years after as…

After 90 years, the University of Nebraska-Lincoln will no longer hold a university-wide honors convocation to recognize students who achieve …

UNL will celebrate its 150th anniversary by looking forward 25 years

Lance Pérez was named dean of the University of Nebraska-Lincoln's College of Engineering on Wednesday, a position he held in an interim capac…

University of Nebraska-Lincoln senior Monica Zurek (left) on Wednesday shows her parents, Shelley and Terry Zurek, an exhibit she helped create to mark the accomplishments of Myron Brakke that's located in the Nebraska Center for Virology at the Morrison Center on UNL's East Campus.

A centrifuge rotor sits atop an exhibit honoring the inventions of Myron Brakke, the late University of Nebraska-Lincoln professor of plant pathology.