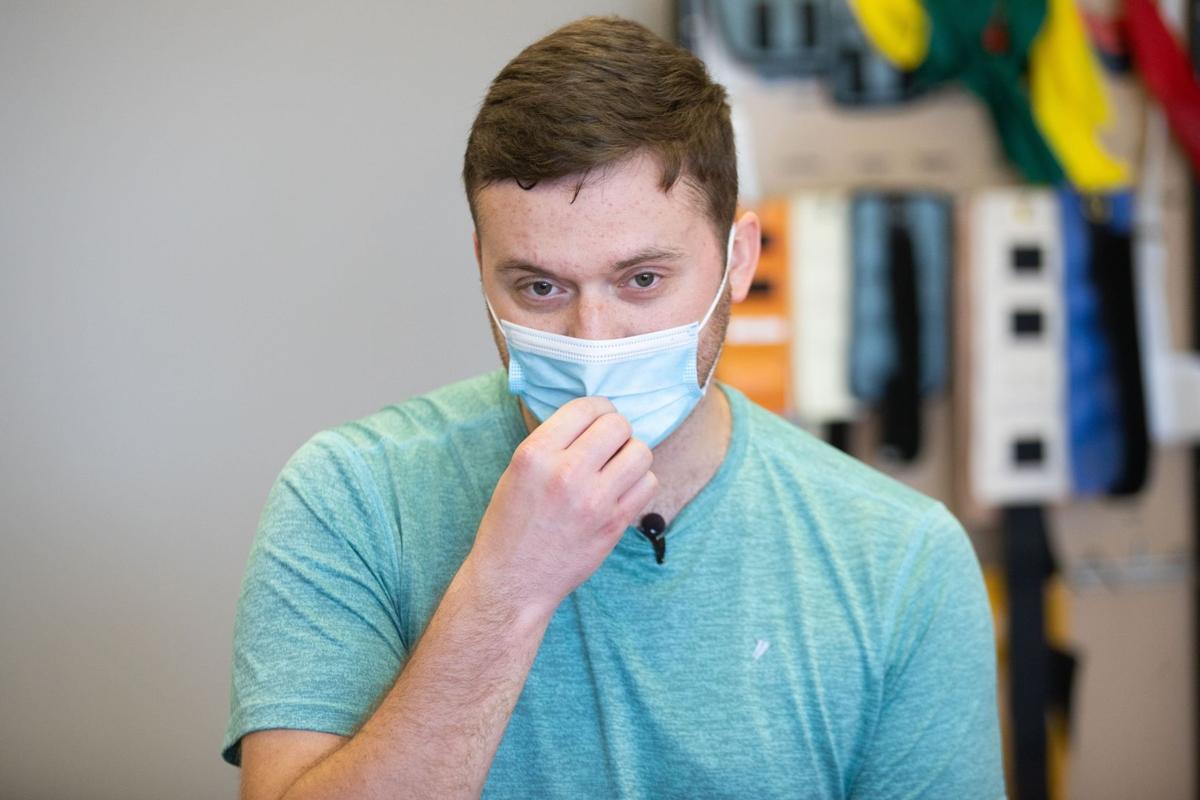 Trevor Larson speaks during an interview at Immanuel Rehabilitation Center on Thursday. 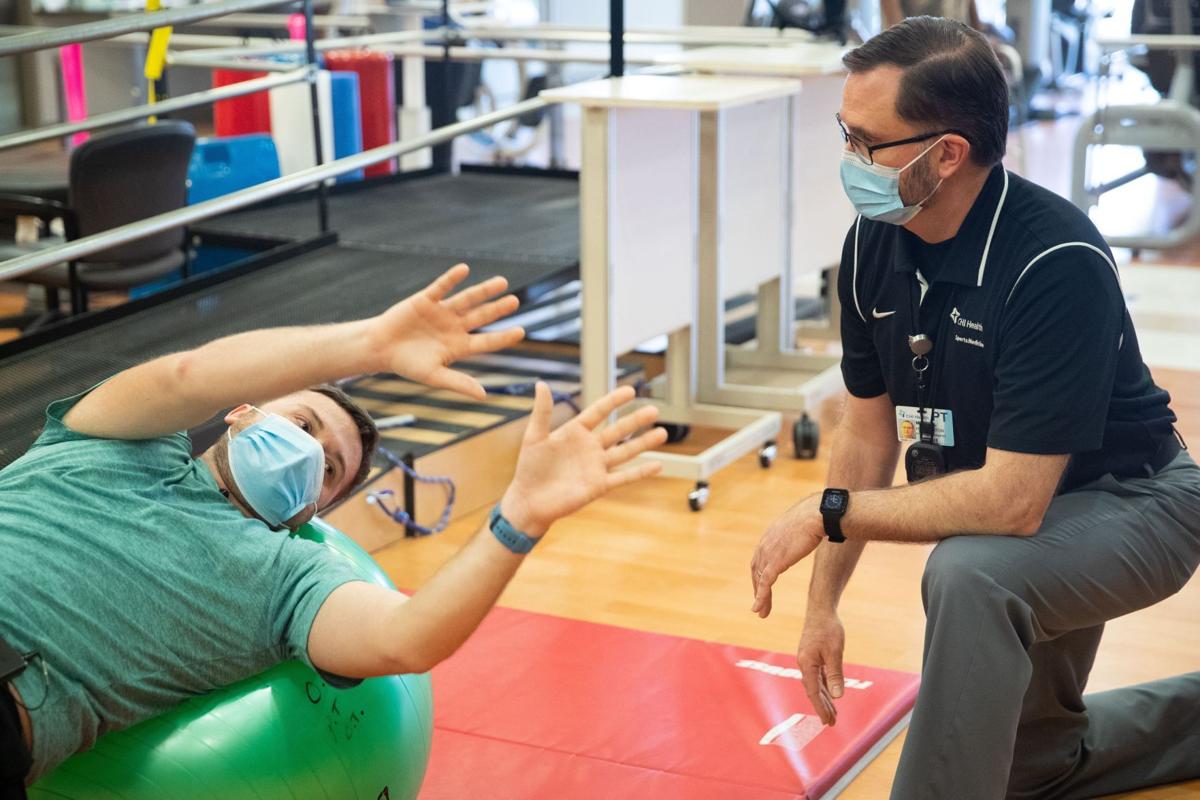 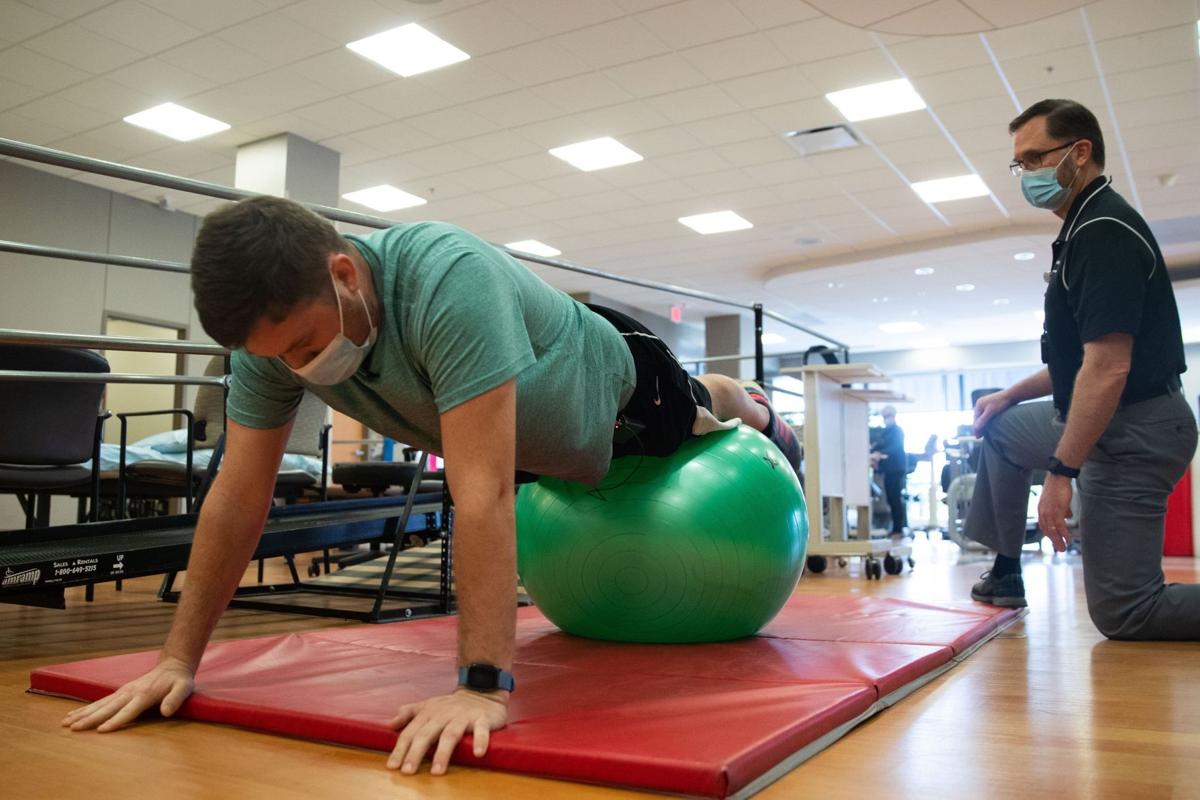 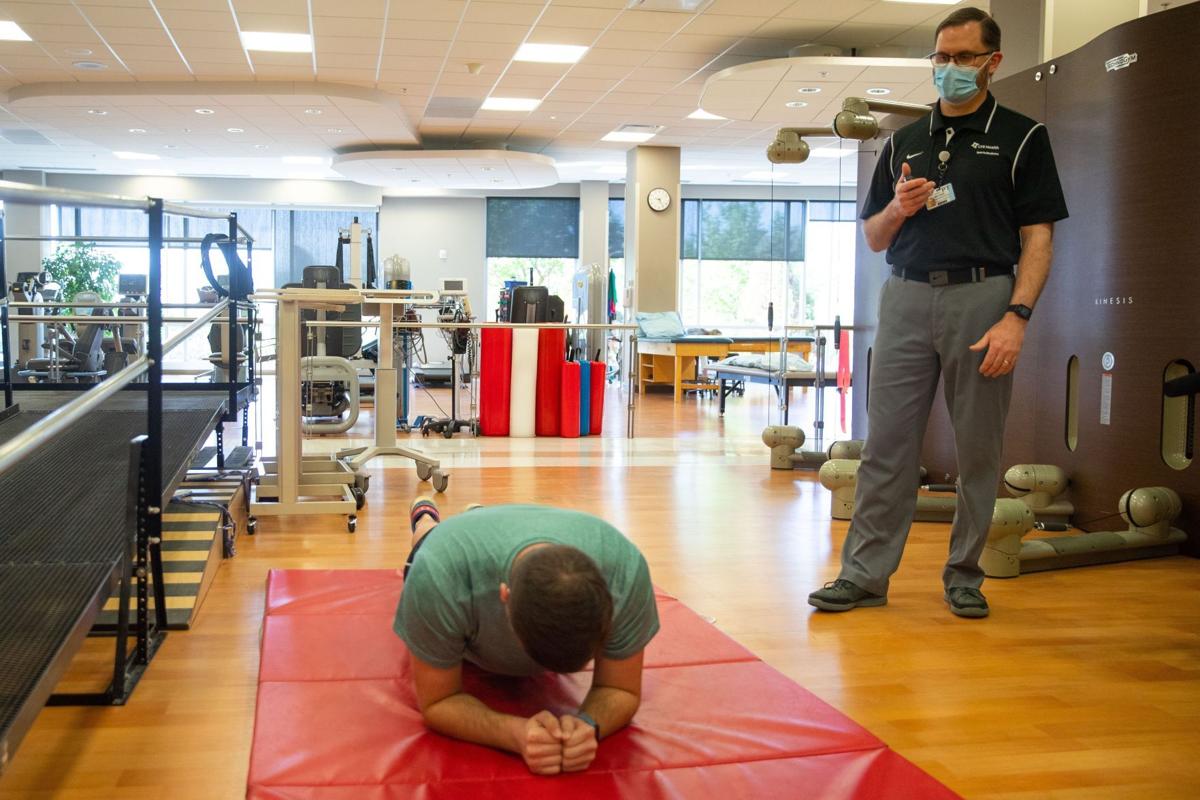 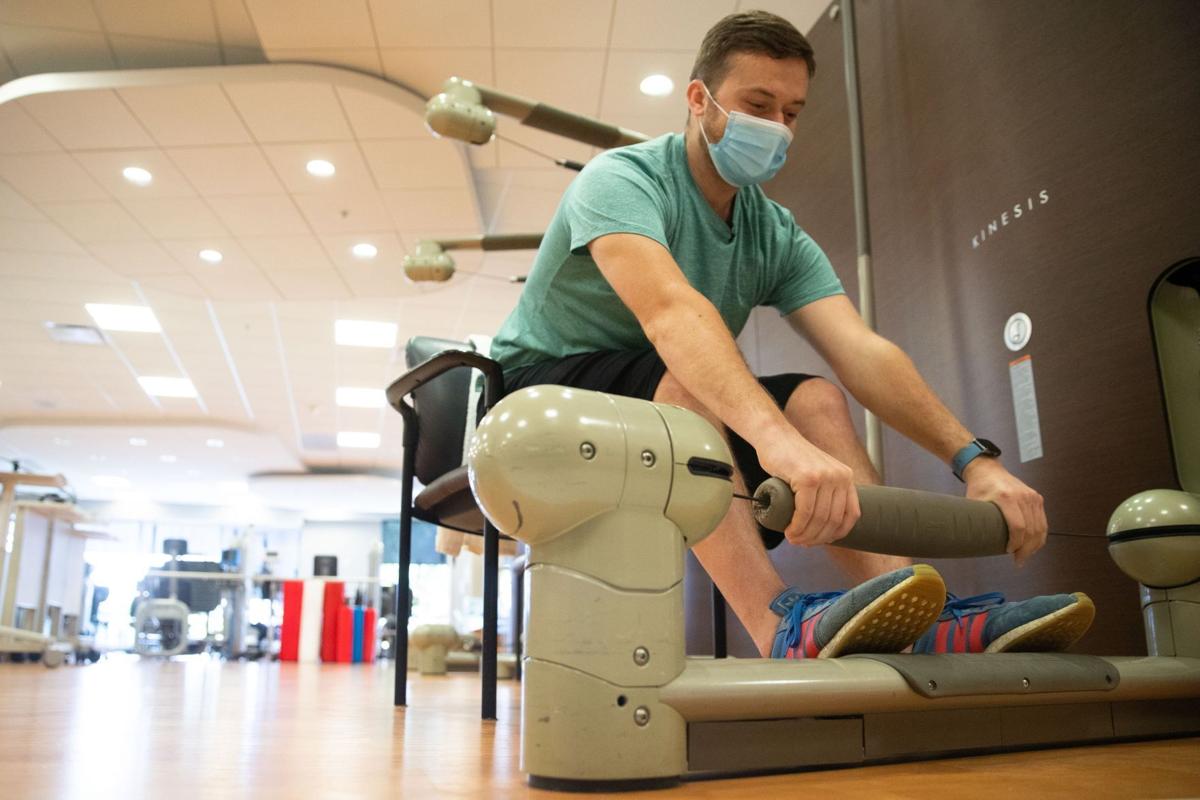 Trevor Larson exercises during a rehab session at Immanuel Rehabilitation Center on Thursday. Larson is recovering from multisystem inflammatory syndrome in adults, which was caused by COVID-19.

At one point, Trevor Larson couldn't feed or dress himself.

He struggled to sit up on his own. And attempting to stand up left him breathless and exhausted.

Larson had to relearn basic skills after a bout with COVID-19 led to multisystem inflammatory syndrome in adults.

Now the 26-year-old Omahan is in physical therapy sessions three times a week. He's able to walk, hold planks and tackle other strength-building and cardio exercises.

Outdoor mask guidance echoes what many Americans already do

"Anybody can get it," Larson said. "I had no pre-existing conditions. I was very healthy, and it got me. Just take it seriously."

Multisystem inflammatory syndrome, which can affect multiple organ systems, is more commonly seen in children. As of April 22, the Nebraska Department of Health and Human Services had recorded 41 cases of the illness in children with no deaths. Nationally, 2,617 cases have been recorded in children, with 33 deaths.

Less is known about the condition in adults, HHS said, and case counts have not been formalized. One study published in October 2020 did describe 27 cases of multisystem inflammatory syndrome in adults in the United States and the United Kingdom.

Larson said he thinks he contracted COVID-19 in late January after a brief exposure to a roommate who had tested positive for the disease. Larson didn't develop symptoms, but by early February, he started to feel sick. He had a fever and felt nauseated and weak.

He asked his parents to drive him from his midtown Omaha home to his primary care doctor. The doctor reviewed X-rays and told Larson to head to the hospital. After several hours at Lakeside Hospital, Larson was taken by ambulance to Creighton University Medical Center-Bergan Mercy.

'The most amazing, humble and kind couple you would ever meet'

"Once they took me into that ER area at Bergan, I don't remember anything," Larson said.

He spent the next eight days sedated.

CHI Health physicians said they have treated a handful of patients with MIS-A. In all of those cases, patients have been treated by a team of doctors whose specialties include infectious disease, cardiology, pulmonology and rheumatology.

"We all work together to make sure the patient receives the right treatment and we continue to follow them," said Dr. Renuga Vivekanandan, an infectious disease doctor with CHI Health.

COVID-19 cases, hospitalizations on the decline. Has Nebraska turned the corner?

The syndrome can show up four to 12 weeks after someone contracts COVID-19, Vivekanandan said. Larson's previous COVID tests came back negative, but once he was admitted to the hospital, an antibody test came back positive. Patients with the syndrome come in very sick, often with kidney, liver or heart failure, said Dr. Joseph Nahas, CUMC's division chief of rheumatology and program director of internal medicine.

The severity of the syndrome varies by patient. Patients requiring life-support measures, such as Larson, are on the more severe end of the spectrum.

When Larson arrived at CUMC, his blood pressure was low and his heart wasn't functioning the way it should, said Dr. Selma Mohammed, a cardiologist.

Larson had to be put on a heart pump as well as kidney dialysis and a ventilator. He also was given a handful of medications to help with inflammation.

Larson is recovering well, his team of doctors said. They will continue to monitor his condition but expect a good outcome.

"Getting to see the turnaround and having their loved one return to how they were prior, that's what makes the job worth doing," Moore said.

Larson woke up feeling foggy. His mom had to explain what was going on, but Larson still couldn't understand. He was frustrated and unable to move.

"It totally felt like I was a baby again," he said.

When he could manage to use his phone, he was flooded with messages from family, friends and members of his church.

"The support was there — from family and beyond — the whole time," Larson said.

During 12 days of inpatient rehabilitation, Larson had to relearn basic skills. Videos from the hospital show him sitting up on his own, standing with assistance and finally cruising down the hall with help from a walker. He also had to relearn to feed and dress himself.

Since mid-March, Larson has been going to outpatient physical therapy sessions three times a week. During a session on Thursday, he walked on the treadmill at different speeds and inclines. His other exercises included rowing, holding planks and leg presses. Between each set, Larson checked his heart rate on his watch and grabbed drinks of water.

Larson said he's close to being at full strength. He still struggles with endurance and has yet to be able to get back on the basketball court. He hopes to accomplish that before wrapping up rehab.

"I know this works," he said of the therapy.

The only way to protect against COVID-19 and multisystem inflammatory syndrome is by getting vaccinated, Vivekanandan said. It's especially important as more young adults are being hospitalized with COVID.

"We have to encourage that population to get vaccinated so this type of event doesn't happen in young, healthy adults," she said.

Larson got his first dose of the Pfizer vaccine on Wednesday.

"It felt like the closing chapter," he said. "Being vaccinated was like, 'OK. It's all in the past now."

Larson has since returned to Lifegate Church in Fremont, where he serves as youth pastor. He walked through the doors to a round of applause from church members.

Their support — and the support of family and friends — helped Larson keep a positive attitude while recovering. He said the experience strengthened his faith.

"God listens to our prayers. He hears us," Larson said. "I just think God heard that and showed favor on me and kept me around."

Video, photos: Creating community during the COVID-19 crisis in Lincoln and Nebraska

Five of the fastest dog breeds on the planet

Five of the fastest dog breeds on the planet

Ann Tillery saw the left side of her face begin to droop in her screen, her speech began to slur and her left arm felt heavy, all of the classic signs of a stroke.

On Tuesday, only seven COVID-19 patients were hospitalized in Lincoln hospitals, five of whom are county residents. That's down from 23 on June 1.

What new colon cancer screening guidelines mean to you

Screening for colorectal cancer is now recommended for all people, beginning at age 45 rather than 50. Here's a look at the updated guidelines.

While more than a dozen states have topped President Joe Biden's 70% COVID-19 vaccination goal, Nebraska isn't quite there yet.

Jeanette Wojtalewicz said the interim post will not be a caretaker role. She and departing CEO Cliff Robertson have worked together for years and the health system has a number of projects with which it plans to move ahead immediately.

The Nebraska Football Road Race, sponsored by The Home Agency, will resume in person this year Sunday, June 20.

State health officials said Nebraska recorded 280 new coronavirus cases over the past week, which was up from 237 cases the week before.

"Individuals who have trouble getting time off for work for court face the same time constraints when getting themselves or their children vaccinated," County Attorney Pat Condon said.

The new installation is billed as the largest outdoor workout structure in Lincoln. The structure replicates many popular machines seen at indoor gyms such as an elliptical trainer, hand cycle, chest press and stair stepper.

Cases of a dangerous Covid-19 variant are 'rapidly increasing' in US, expert says

As US states lift more coronavirus restrictions, experts are worried people who aren't fully vaccinated could contribute to further spread of the virus. 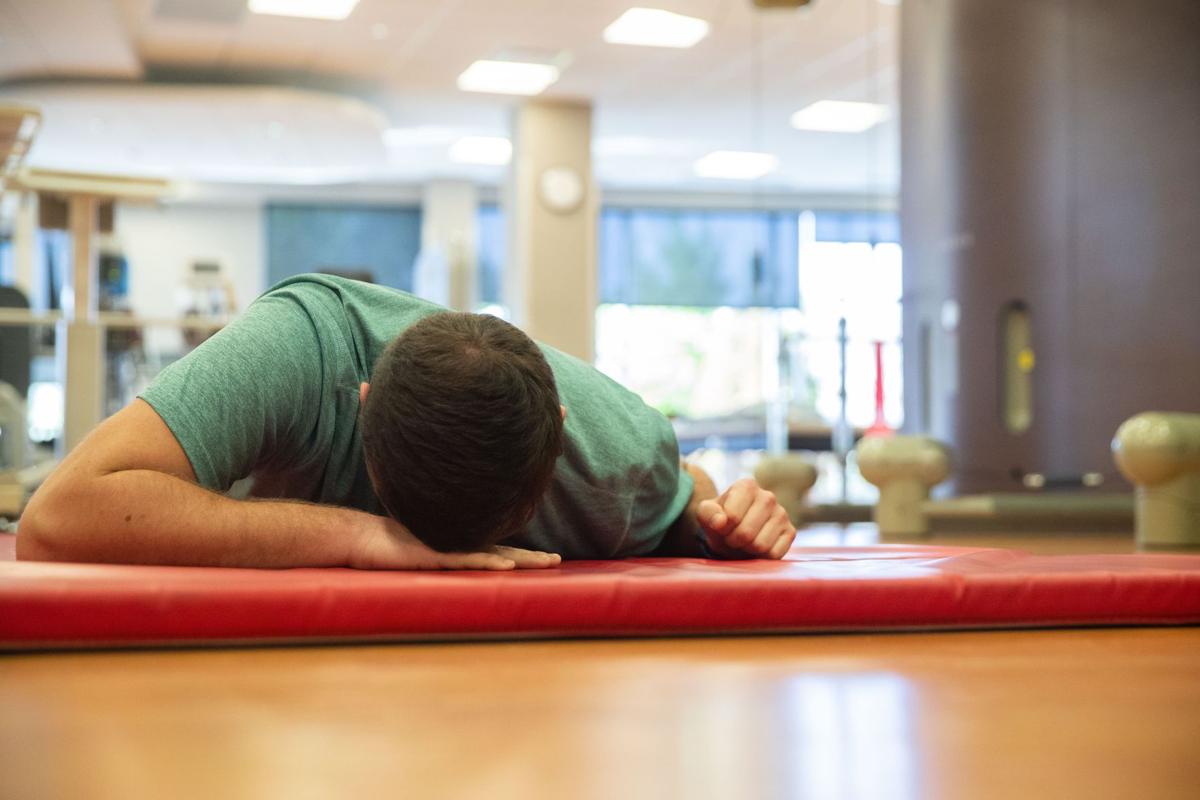 Trevor Larson rests between exercises during a rehab session at Immanuel Rehabilitation Center on Thursday.

Trevor Larson speaks during an interview at Immanuel Rehabilitation Center on Thursday. 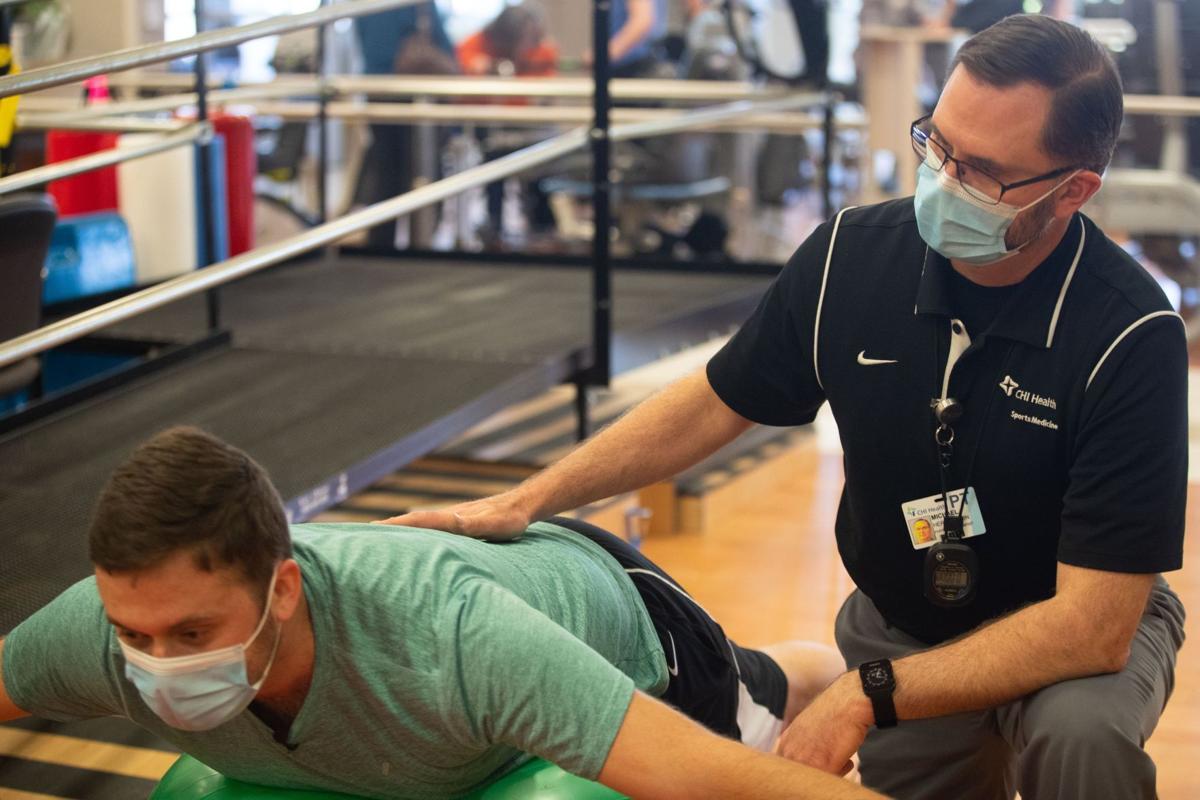 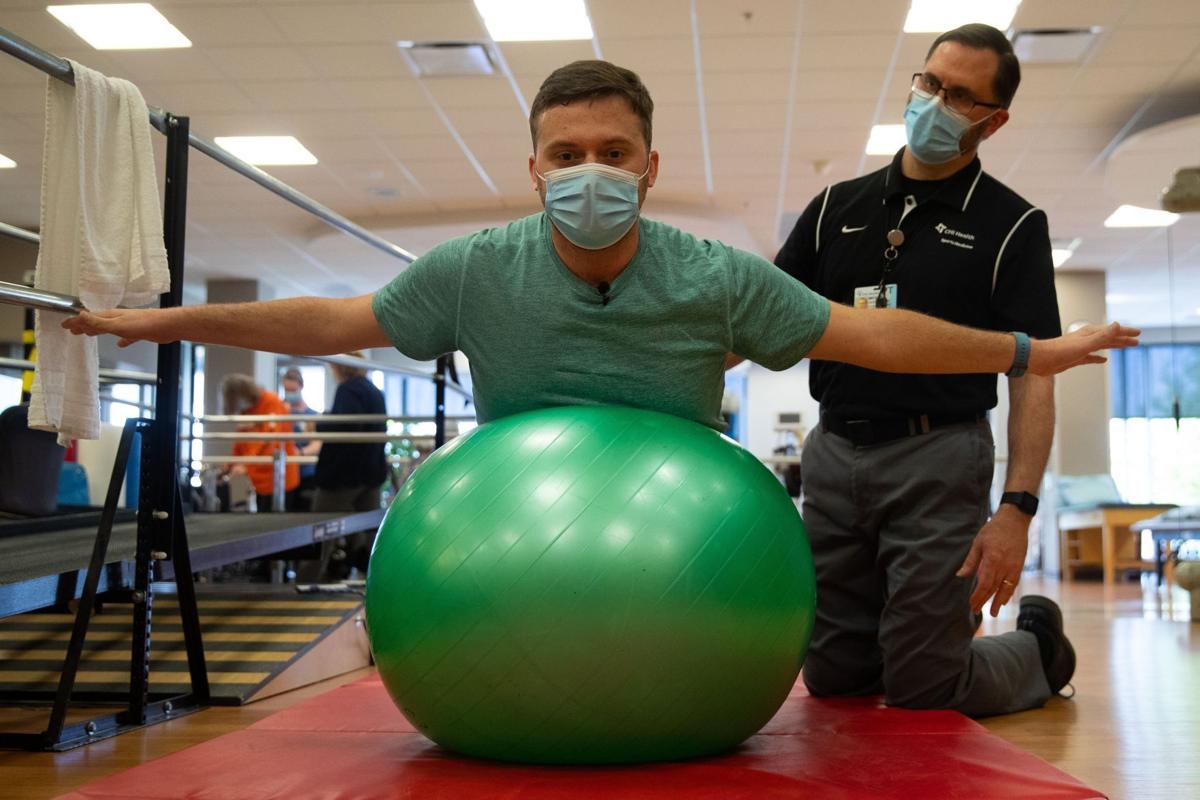 Trevor Larson exercises during a rehab session at Immanuel Rehabilitation Center on Thursday. Larson is recovering from multisystem inflammatory syndrome in adults, which was caused by COVID-19.