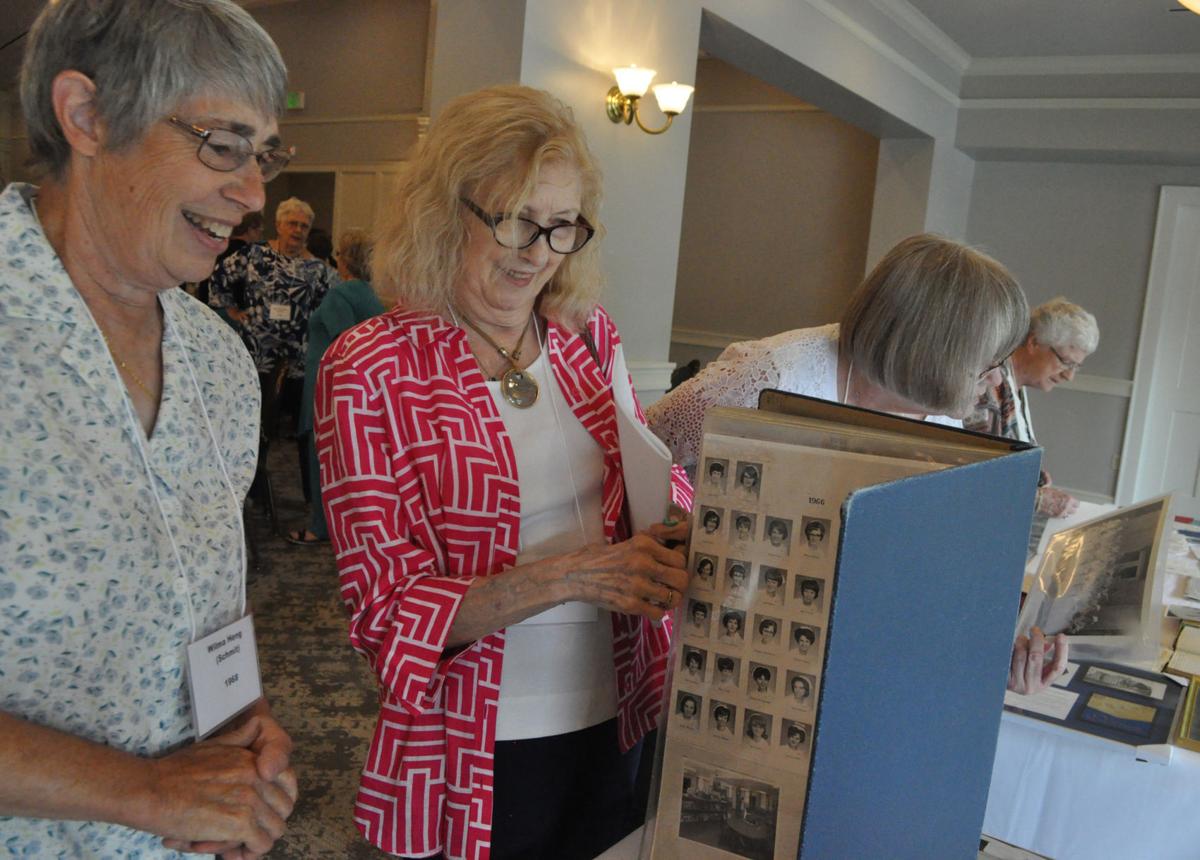 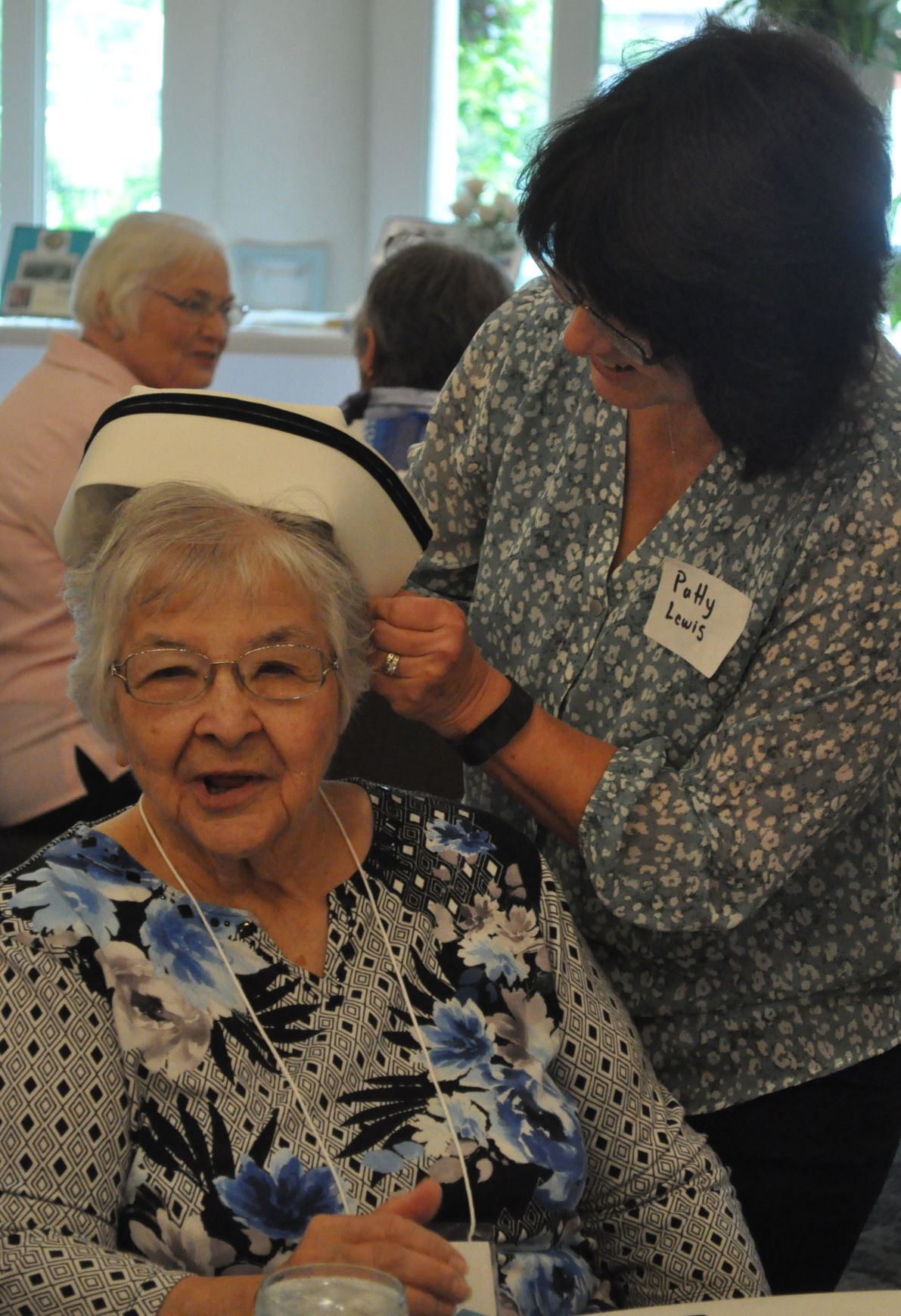 Patty Lewis from Indiana places a nursing cap on the head of her mother, JoAnn (Delisi) O'Brien, a 1960 St. E's School of Nursing graduate from Dayton, Ohio. 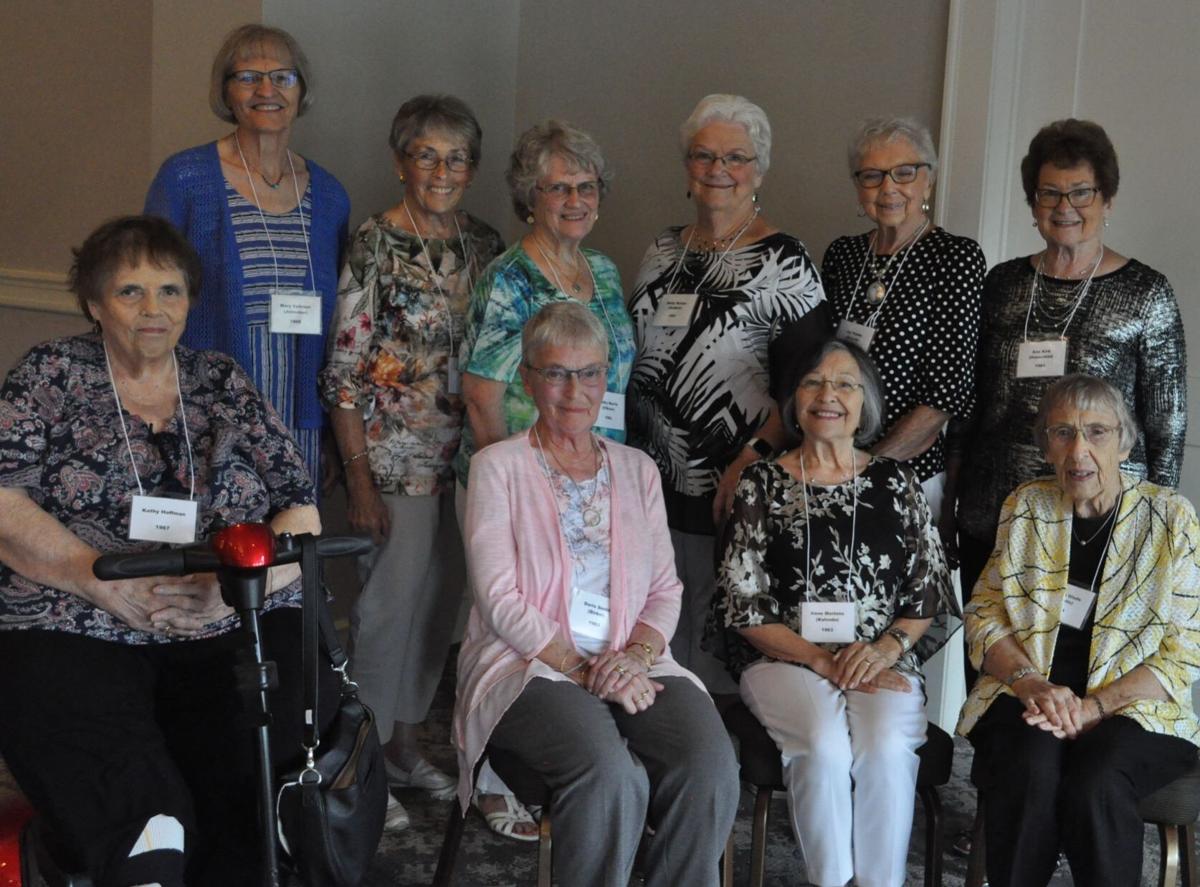 BY DENNIS BUCKLEY for the Neighborhood Extra

That year also spawned the establishment of a school for the education of nurses at St. Elizabeth Hospital in Lincoln, which had opened in 1889 and stretched from 11th to 13th streets on South Street.

1970 marked the move of the hospital to its current location at 555 S. 70th St. – and the final graduating class at the nurses’ school. But the St. Elizabeth Hospital School of Nursing Alumni Association, formed in 1920, remained active and raised scholarship monies for nursing students.

About 100 years after the influenza pandemic of 1918, another deadly virus interrupted a time-honored tradition last year: safety concerns linked to COVID-19 forced the first canceled banquet in the 100-year history of the St. Elizabeth Hospital School of Nursing Alumni Association. The decision scuttled plans to celebrate the 50th reunion of the nursing school’s last graduating class in 1970.

The association’s 11-member Steering Committee, whose members are now in their 70s and 80s, decided last year to begin to dissolve the organization – and to go out with a bang in 2021, honoring all graduates of the St. Elizabeth School of Nursing at the association’s final banquet.

The grand finale, held July 10 at the Country Club of Lincoln, was one for the ages: a record turnout of 162 alumni, representing 21 states, checked in at the registration table. They shared memories of an era when glass syringes were reusable, nurses donned white uniforms and nursing caps instead of scrubs, and longer hospital stays were prevalent before rehab transfers became the norm.

“We hate to see the organization dissolve, but it’s time,” said Kathy (O’Brien) Morris, a 1966 nursing school graduate and daughter of Nina (Samuelson) O’Brien, an alumna of the Class of 1935. “It’s really bittersweet.”

The retired Lincoln nurse received a shout-out from the association for her 21 years of service compiling the alumni annual report.

“We have 430 current addresses of the 1,056 graduates (of the nursing school), and 503 are deceased that we know of,” Morris wrote in this year’s annual newsletter.

Only five men graduated in the 52-year history of the St. Elizabeth School of Nursing. “Most of them went into anesthesia,” Volkmer reflected. “Now you see more men as registered nurses.”

Today’s wages in the nursing industry are about 10 times the rate that existed ($2.89 per hour) when Volkmer graduated in 1968. Current hourly rates for an RN in Lincoln range from $24 to $36, she said.

Reviewing figures from her nursing school years, Volkmer said nursing school expenses in the late 1960s totaled $3,166, which included $200 per semester at UNL for a student’s first year.

The end of the Nurses’ Alumni will not mean the end of its nursing scholarship assistance program. The association’s endowment fund will continue ad infinitum, Saint Elizabeth/Nebraska Heart Foundation Chief Development Officer Donna Hammack wrote in a letter to members of the Nurses’ Alumni.

An endowment scholarship fund created in 2001 had a balance of $159,930 at the time the letter was submitted for inclusion in the annual newsletter.

In addition, the Alumni Association will donate the balance of its checking account, beyond 2021 expenses, to the Catholic Social Services of the Diocese of Lincoln.

Three yoga poses that will kickstart your morning

Three yoga poses that will kickstart your morning

Protecting your pets from heat

Protecting your pets from heat

An average of 101 Nebraskans a day were hospitalized with the virus last week, up 24% from the previous week.

What HIPAA is and is not: A primer on the health care privacy law

If your employer is asking you to prove you've been vaccinated, is that a HIPAA violation? What if a store says you need to show proof of vaccination to enter? Here's what HIPAA covers — and what it doesn't.

Whole Foods recalls cheese at stores in Nebraska, 21 other states

The cheese products, which came from the store's specialty market, could be tainted with Listeria.

The person who tested positive is in the Elkhorn-Logan Valley Health Department area, which covers Burt, Cuming, Madison and Stanton counties.

About two-thirds of Lancaster County residents 16 and older are fully vaccinated, but health officials say that's clearly not enough to stamp out the disease. Restrictions aren't being discussed at this time, Health Director Pat Lopez said.

You can skip masks in most places, but not in Nebraska hospitals

Health systems are reminding people that masks still are required — even for vaccinated patients, visitors and staff — in most health care settings in Nebraska.

With the start of classes roughly a month away, barely more than a third of the state's 12- to 17-year-olds have received at least one dose of COVID-19 vaccine.

Patty Lewis from Indiana places a nursing cap on the head of her mother, JoAnn (Delisi) O'Brien, a 1960 St. E's School of Nursing graduate from Dayton, Ohio.