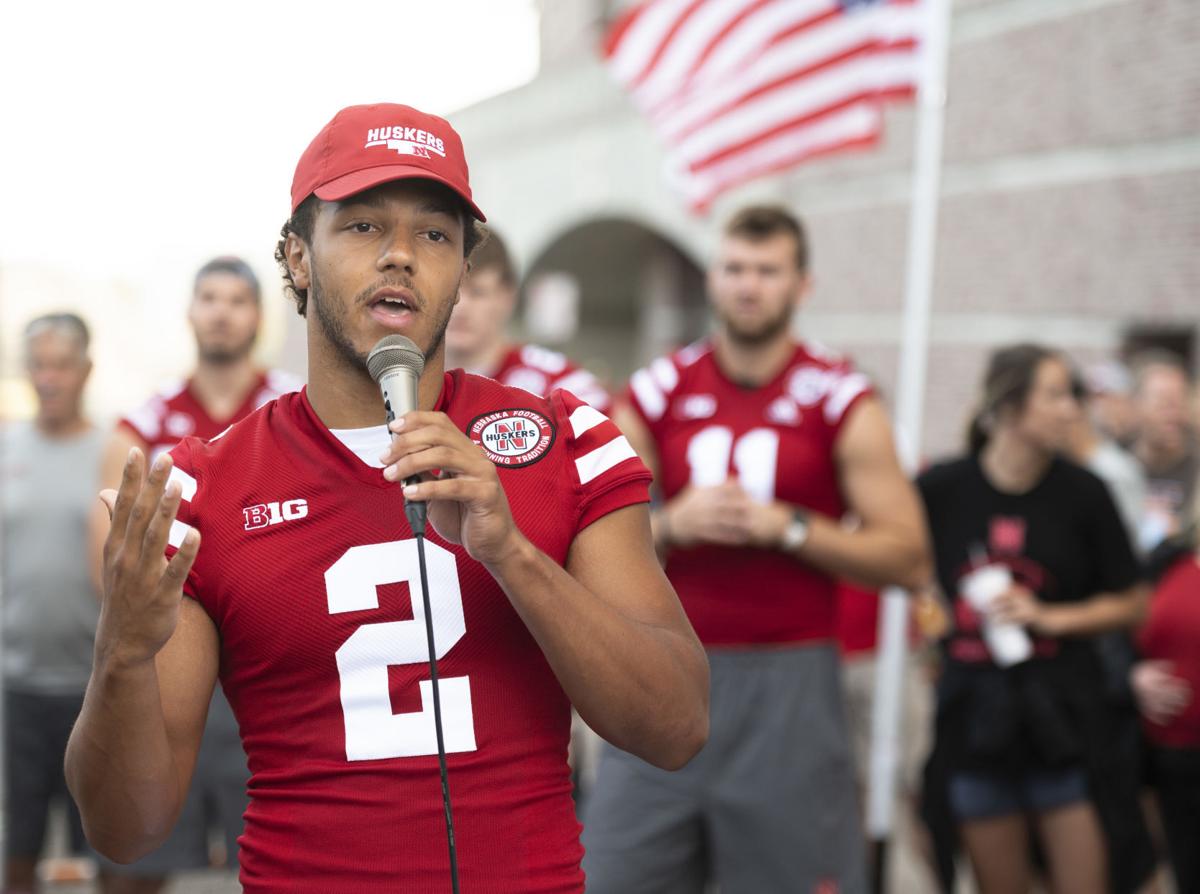 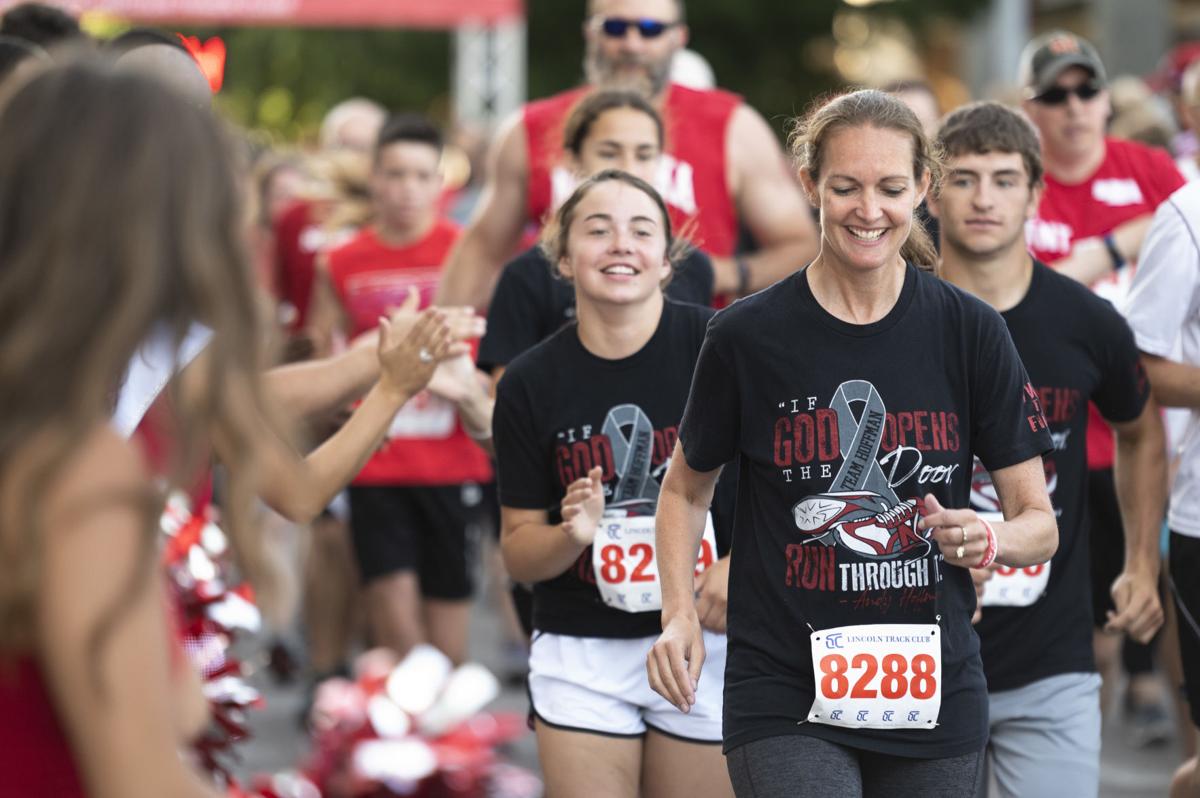 Brianna Hoffman and her children begin the 5K race June 20 outside Memorial Stadium. 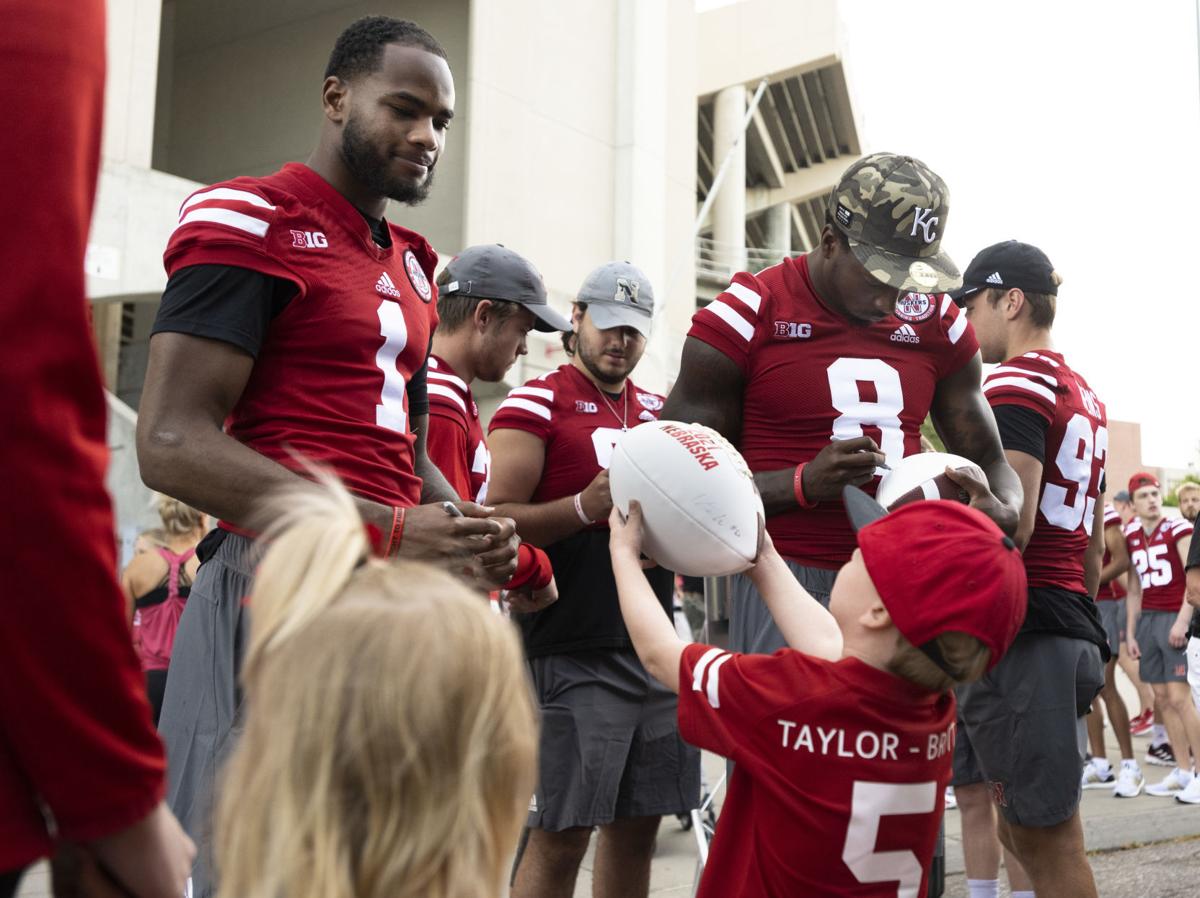 Chase Cattau hands a football to Nebraska football players to get it autographed June 20 outside Memorial Stadium.

Over 750 participants ran or walked the 1-mile fun run or the 5K race among the entire Husker football team. Huskers, in their home red jerseys, lined the start and finish lines and were all along both courses, cheering on the runners, with some running alongside participants.

Before and after both races, the team was available to the public for photographs and autographs.

As in years past, families that have been affected by childhood brain cancer attended and were honored at the event.

Before the 1-mile fun run, Nebraska quarterback Adrian Martinez spoke to those in attendance. He talked about his involvement in the Nebraska Football Road Race and about how cancer has touched his life. He thanked Husker Nation and the community of Lincoln for supporting the event and the cause.

“I know what it’s like to fight for this cause,” Martinez said. “Growing up, my mom was diagnosed with cancer and passed away (from the disease). It’s not easy, but I know it’s better together.”

Following Martinez, Angie Vasa, aunt of 12-year-old brain cancer fighter Kieran Akerson of Valley, Nebraska, addressed the crowd. She shared the feelings her family faced when Kieran was diagnosed last December and about his fight. Vasa asked everyone to imagine walking that journey with their child and ended with this:

“Seize your moments, tell the people you love that you love them, and say ‘yes’ to the things that matter. Eat the dessert, take the vacation and run the race. Let’s run this race to honor those who cannot be here with us today, to celebrate those who can and to change the future for those that come next.”

Andy’s wife Brianna, his children Jack, Ava and Reese, and many other family members were on hand to run and walk in Andy’s honor.

Prior to the start of the 5K race, Nebraska football coaches Greg Austin and Ryan Held spoke about the impact this race has on them and on the team, ending with a “Go Big Red,” firing up the crowd.

Then, on behalf of the Nebraska football team, Keith Zimmer, senior associate athletic director and director of the Life Skills Department, presented the Hoffman family with a framed #1 Nebraska jersey bearing the name HOFFMAN, and an inset photo of the Hoffman family at a past road race. The plaque on the gift states: “In honor of the outstanding leadership and advocacy by Andy Hoffman to raise awareness and funds for pediatric brain cancer research. Always remembered, never forgotten and deeply passionate about Husker football, while always striving to make a difference! Presented on Sunday, June 20, 2021, by the Nebraska football team and all of Husker Nation.”

Following the jersey presentation, Brianna Hoffman took the microphone and thanked the crowd and everyone involved in making the road race happen each year.

“Andy always said, ‘A drop in the bucket has a cumulative effect – whether you're here supporting someone or running, it all really makes a difference,” she said. “Because of events like this, we have been able to fund a lot of research as a foundation, and now we are able to fund research here in Nebraska, in Omaha, which has been amazing. We are well on our way to creating an awesome brain tumor program right here in the state. Andy would be humbled and honored that everyone is here today supporting the event. As a family, we want to say thank you everyone for coming, and you're really making a difference.”

Supporting the Nebraska Football Road Race were title sponsor The Home Agency, the University of Nebraska Life Skills Department, and the Lincoln Track Club. To date, including proceeds from this year’s race, $175,000 has been raised for the Nebraska Childhood Brain Tumor Program at the University of Nebraska Medical Center and Children’s Hospital and Medical Center in Omaha. This program was started by $1.5 million from both the Team Jack Foundation and the State of Nebraska. In 2018, the Team Jack Foundation announced a $5 million pledge to continue developing the program to help children in Nebraska and in the Midwest have access to the best care possible.

Why back-to-school shopping is harder this year

The benefits of playing tug-of-war with your dog

The benefits of playing tug-of-war with your dog

Expiration of an executive order over the weekend means health districts can no longer publicly report COVID-19 statistics for 76 of the state's 93 counties.

What seemed like just a cold in November led to complications for Marli Stone. The basketball and softball player at Crete High School could barely make it up the floor during basketball games.

Shelly Wachter of Syracuse says she didn't get the COVID-19 vaccine because she heard too much conflicting information about the shot.

Cases in Nebraska increased at a faster rate than they did nationally, with Nebraska’s 65% growth in cases last week ranking 15th highest among states.

Parents of kids scheduled to go to the camp near South Bend found out Sunday afternoon that it was being canceled because of a "confirmed positive COVID exposure" during last week's camp.

40 counties in Nebraska have substantial or high COVID transmission

UNMC's Dr. James Lawler stressed that increasing vaccination is the most important thing. "We really would be done with the pandemic that way. The sad fact is that’s all within our grasp. We just need to reach out and take it.”

The Tokyo 2020 Olympic Games are finally here in 2021, and who better locally to talk about the Games than longtime gymnastics coach Francis A…

Brianna Hoffman and her children begin the 5K race June 20 outside Memorial Stadium.

Chase Cattau hands a football to Nebraska football players to get it autographed June 20 outside Memorial Stadium.