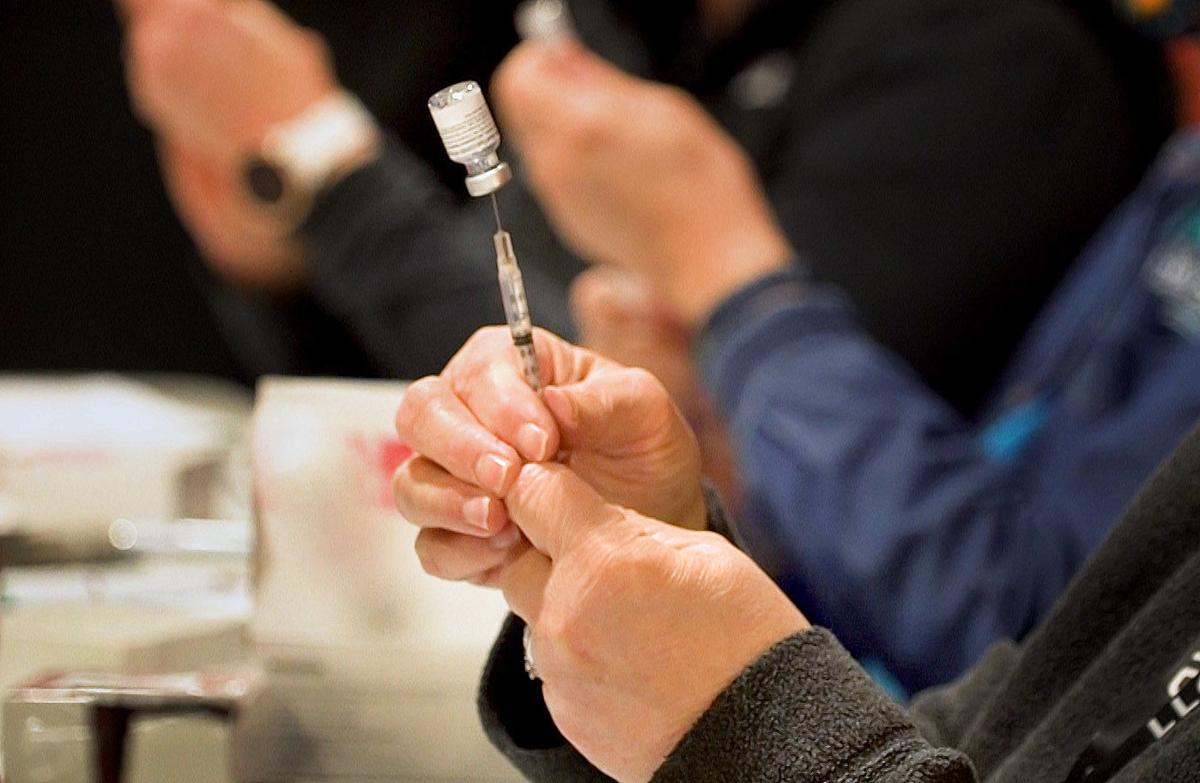 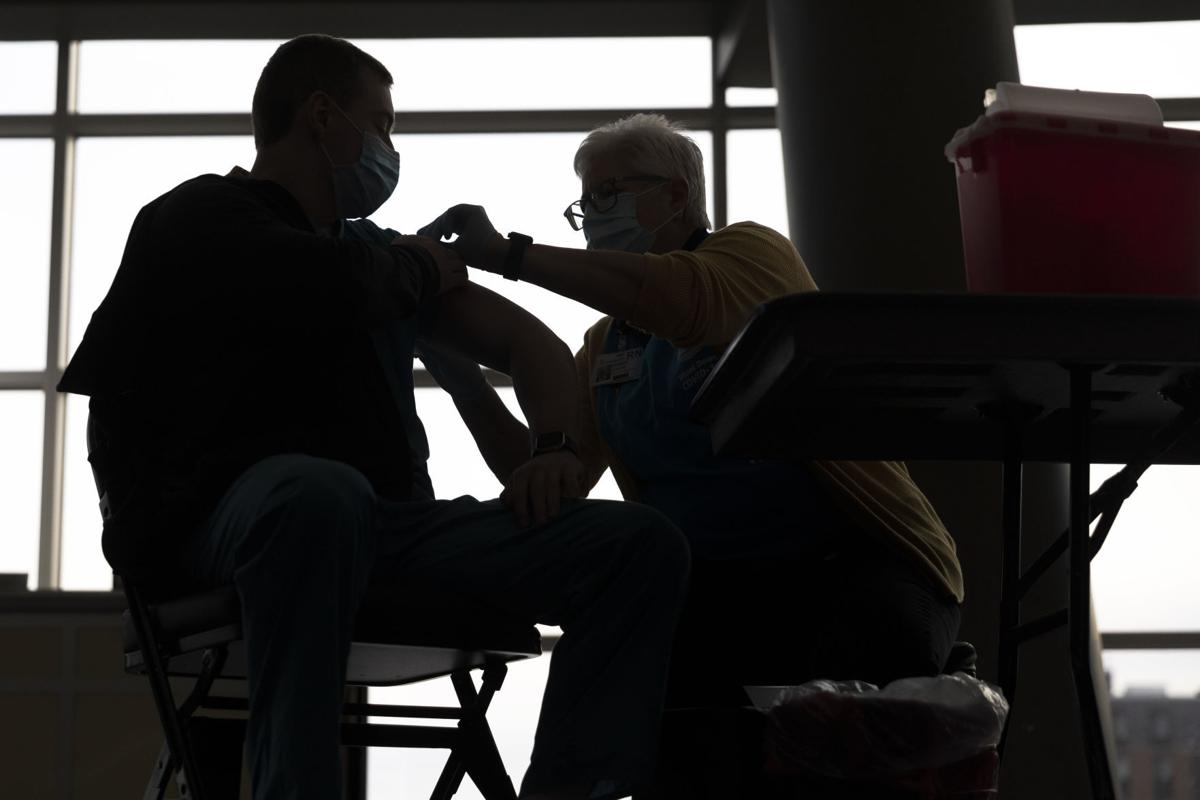 A nurse administers the first dose of the Moderna vaccine Friday at Pinnacle Bank Arena.

As the state Department of Health and Human Services works with federal partners to restore shipments of vaccine bogged down by frigid weather, officials are making changes to who it is prioritizing for the vaccine.

Felicia Quintana-Zinn, deputy director for public health, said in updating its priority list, it removed people with high-risk medical conditions from the current priority group to keep as much vaccine as possible over coming weeks and months for the state's oldest residents.

Currently, health districts across the state are working to vaccinate people 65 and older as part of Phase 1B, the priority group that also includes people of all ages working in critical infrastructure, like utilities workers, educators, grocery store employees and postal carriers.

Once Phase 1B is complete, Gov. Pete Ricketts said Thursday that the state will move on to vaccinate those 50 and over. The state says 97% of the Nebraska residents who have died from the coronavirus are in that 50-and-over group.

It appears younger Nebraskans with high-risk medical conditions, or comorbidities, will be vaccinated at the same time as others in their age group.

Clarity on the changes to the state's vaccine priority plan came in a late afternoon news release, hours after Ricketts, when asked about the schedule going forward for people with high-risk medical conditions, said only, “Stay tuned,” at his morning news conference.

In his briefing, Ricketts expressed confidence that the state will begin vaccinating the state's general population — those under 65 — in April or May, as much as a month ahead of earlier projections.

That's despite setbacks this week. Several of the state's health districts were forced to cancel COVID-19 vaccination clinics after winter weather delayed shipments. However, clinics on Thursday and Friday in Lincoln were unaffected.

A clinic to provide second doses to health care workers scheduled for Friday at the arena also was proceeding, according to Leah Bucco-White, a spokeswoman for the Lincoln-Lancaster County Health Department.

The delays elsewhere were attributed to severe weather across the nation.

Angie Ling, the Nebraska Department of Health and Human Services incident commander, said the state received a couple of Pfizer shipments Monday, but as of Thursday morning the "majority" of its vaccine shipment for this week had not yet arrived.

Ling said she had no information as to when those shipments will arrive, and the issue likely will cause backlogs that could lead to delays next week and beyond.

"This is a nationwide problem, not just for Nebraska, and we're working with our federal partners," she said.

Ling also said that Nebraska pharmacies participating in the Federal Retail Pharmacy Program have not received any vaccine this week.

Beatrice Community Hospital and Health Center contacted individuals to cancel all COVID-19 vaccinations scheduled for Thursday after the vaccine did not arrive as scheduled.

Once it arrives, the hospital said it will call to reschedule vaccinations. Those individuals will be first on the list for scheduling when the vaccine arrives.

The Central District Health Department based in Grand Island said it did not receive its shipment of Moderna vaccines this week that it was planning to give to people who need their second dose. The department said it did receive Pfizer vaccine and would proceed with clinics using those doses as scheduled.

Four Corners Health Director Laura McDougall said her district had received no doses of vaccine this week. She said a clinic in York was going forward this week as scheduled, but other clinics throughout the district, which covers Butler, Polk, Seward and York counties, had to be canceled.

The good news Thursday was that vaccine allocations to the state are being increased, and new data shows that six doses rather than five can be administered from each vial of Pfizer vaccine.

Why masks could still be necessary in 2022

Why masks could still be necessary in 2022

The best dog breeds for families with kids

The best dog breeds for families with kids

Not only are current vaccine allocations to the state being increased, new data shows that six doses rather than five can be administered from each vial of Pfizer vaccine.

The early, positive results of nursing home vaccinations represent clinical evidence that the vaccines could one day help stamp out the worldwide pandemic.

The man, who was in his late 40s, had a number of existing health conditions and lived in a long-term care facility.

Health Director Pat Lopez said she does not yet know if there will be any first-dose clinics next week, largely because the department does not get know what vaccine supply will be like next week.

COVID vaccines do not contain fetal cells, but cell lines were used in some testing

A flyer that circulated in Omaha had falsely suggested that the two vaccines approved for COVID-19 contained tissue from aborted fetuses.

The total number of cases reported during the week that ended Friday was 320, which was down from 342 the previous week.

"This amendment protects the integrity of our nation's highest court and ensures that it remains an independent branch of government," Fischer wrote.

On Wednesday, registered residents who are 71 and older along with their spouses will be scheduled to receive their first COVID-19 vaccine shot at the Pinnacle Bank Arena.

"We do have an aging demographic in our state," Sen. Brett Lindstrom of Omaha told the Legislature's Revenue Committee in urging action to encourage retirees to remain in Nebraska.

Precautions will be necessary until enough people have been vaccinated against COVID to reach herd immunity, and transmission of the coronavirus has been further reduced.

Gov. Pete Ricketts said all vaccination registrations and appointments will be migrated to the state's vaccine website over the next few weeks.

A nurse administers the first dose of the Moderna vaccine Friday at Pinnacle Bank Arena.