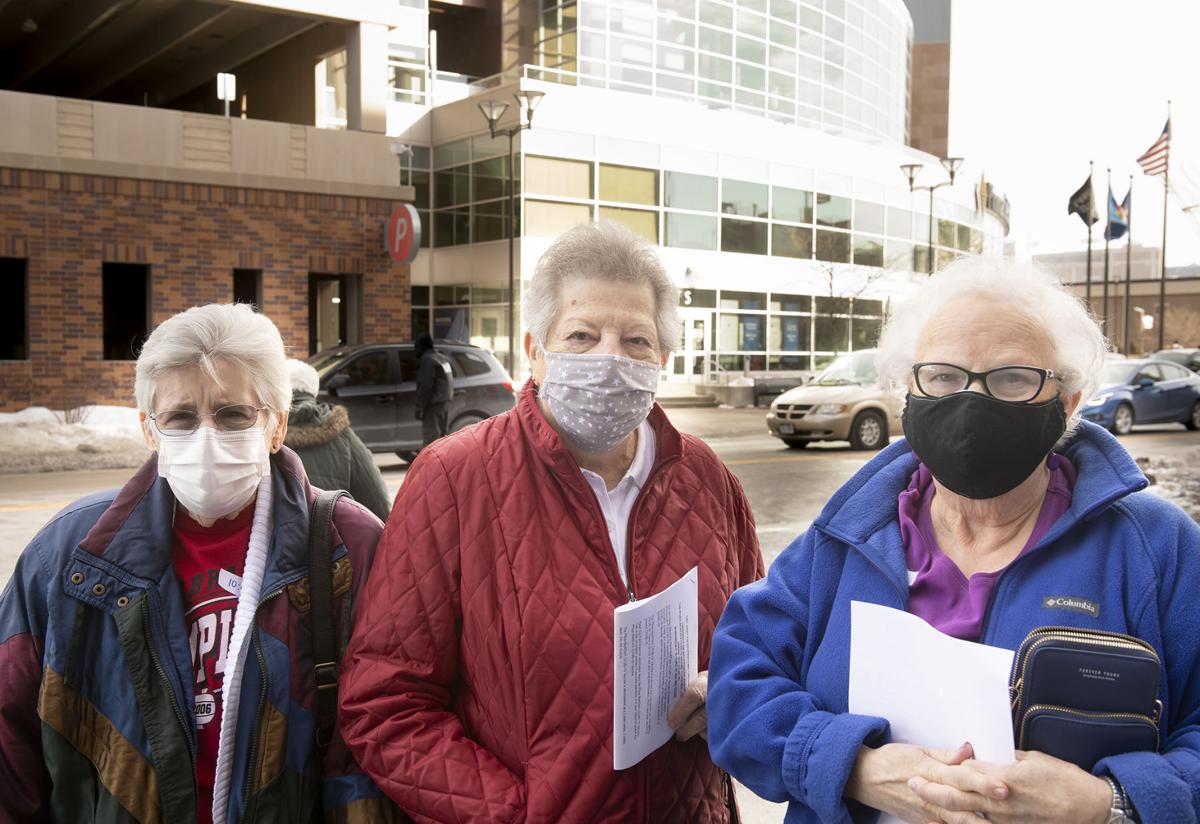 Sandy Luedke (from left), Jan Buffum and Lois Burger received COVID-19 vaccinations at an event for those in the Phase 1B priority group at Pinnacle Bank Arena on Friday. 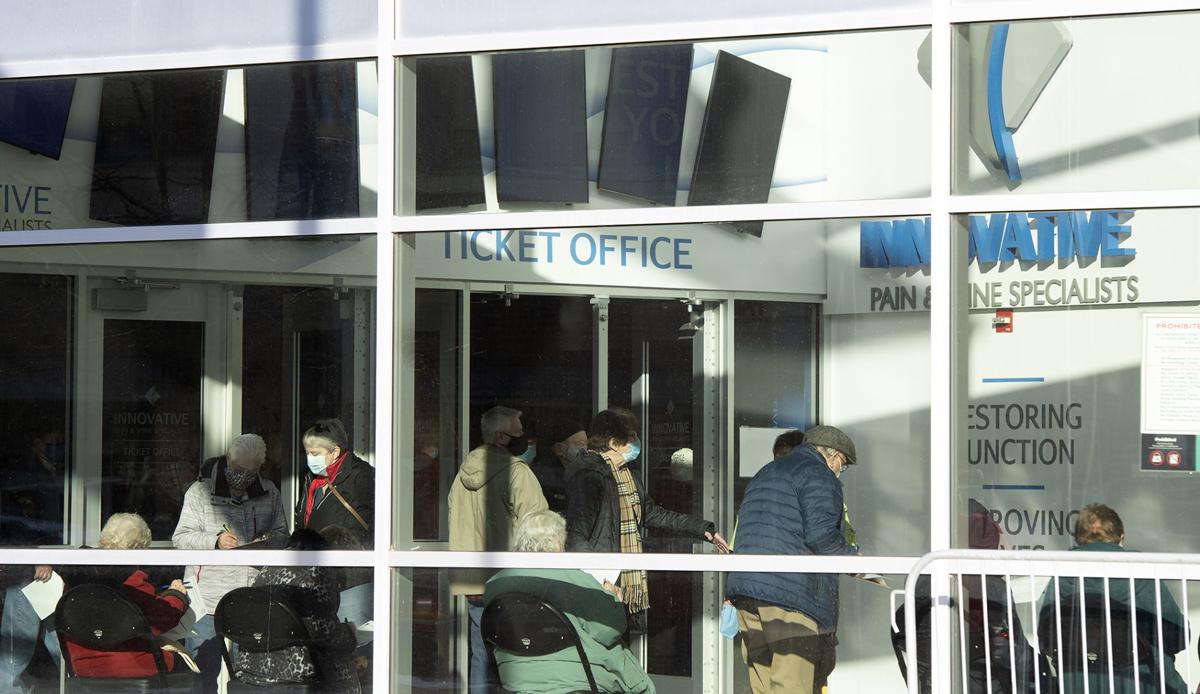 People enter Pinnacle Bank Arena during a COVID-19 vaccination event for those in the Phase 1B priority group on Friday. 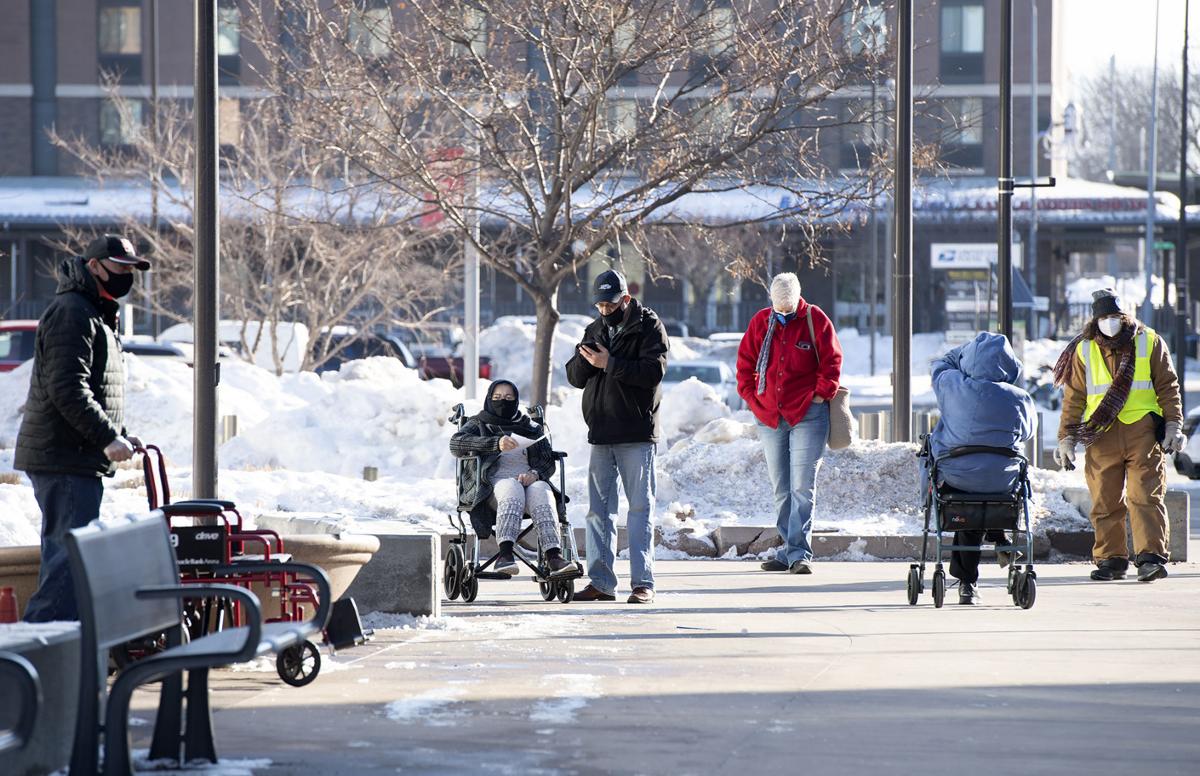 After receiving the COVID-19 vaccine, people wait for rides outside Pinnacle Bank Arena on Friday. 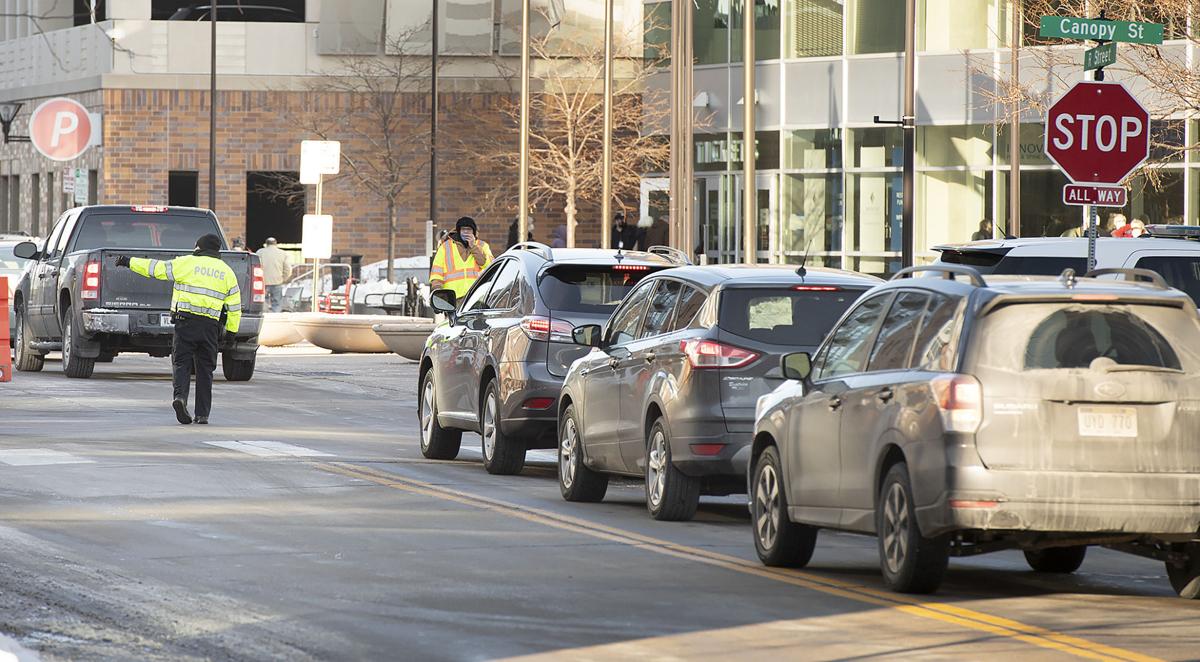 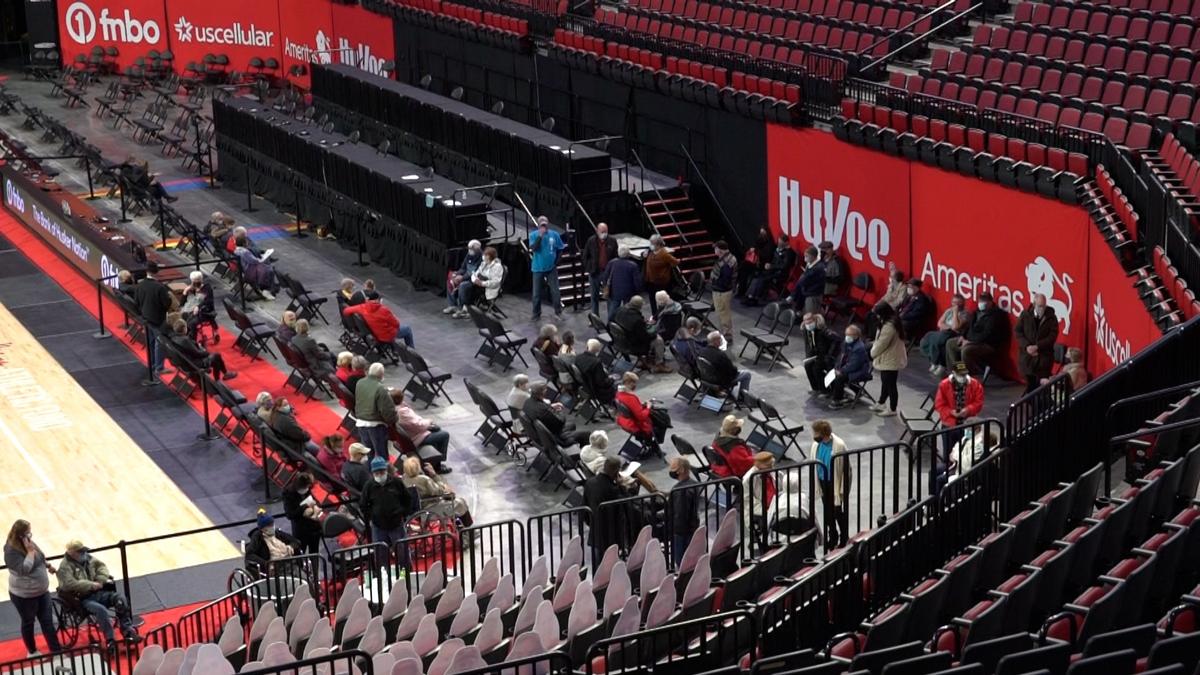 People wait after receiving a COVID-19 vaccination at an event for those in the Phase 1B priority group last Friday. 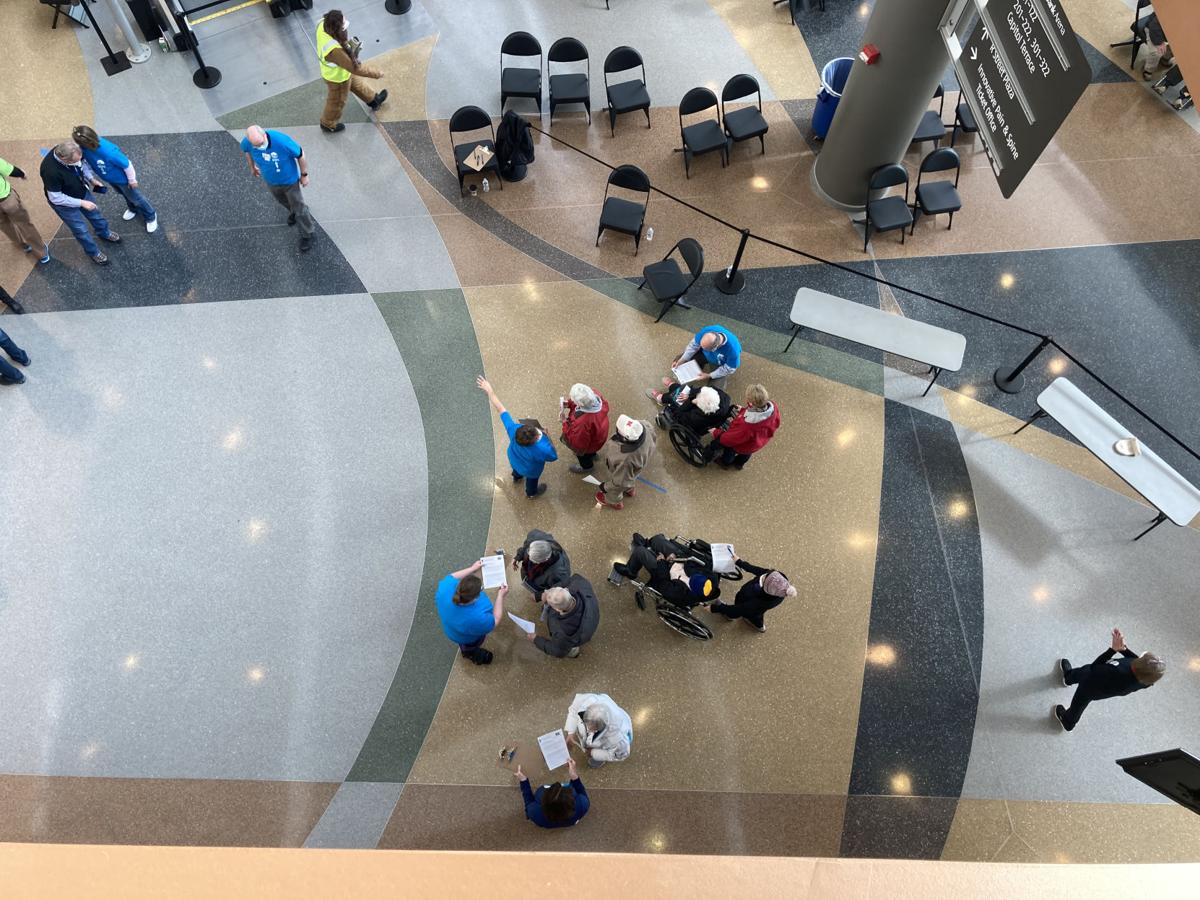 People enter a COVID-19 vaccination event for those in the Phase 1B priority group Friday at Pinnacle Bank Arena.

Lois Burger said she's been waiting a long time to get the COVID-19 vaccine.

"I haven't seen my complete family since March 1, which was my birthday, so I'm really excited," said the 80-year-old Lincoln woman.

Burger was among the nearly 5,000 seniors who got their first dose Friday as part of the first public mass vaccination clinic at Pinnacle Bank Arena.

At 8:30 a.m., as the clinic was starting, there was a line of cars stretching about three blocks long on Arena Drive as people waited to get into either the parking garage attached to the arena or the one across the street, where a man in a yellow jacket was directing some people to go.

What to expect at Friday's vaccination clinic at Pinnacle Bank Arena

At the arena's front entrance, people were being dropped off, some pushed in wheelchairs by attendants.

It was the third mass vaccination clinic held at the arena, and the Lincoln-Lancaster County Health Department has said it is likely to be used for future ones, although it has not released any details.

Local officials plan to focus on vaccinating people in independent-living facilities next week.

The Health Department originally set about 3,500 appointments for Friday's clinic, but when it found out it would receive more vaccine this week, it called about 900 people 80 and older who had registered on the city's vaccine website but hadn't yet got an appointment. The department also decided to let spouses of those with appointments get vaccinated even if they were younger than 80.

Up to 400 people an hour were shuttled through lines of volunteer vaccinators on the arena's main floor and the concourse level accessed by elevators.

More than 120 staff members were on hand to help anyone needing assistance to get their shot. Staff and volunteers also took temperatures as people arrived and sanitized chairs and other high traffic areas regularly.

"Being able to vaccinate this vulnerable group is extremely rewarding," Health Director Pat Lopez said. "The success of the clinic was the result of assistance from community partners and volunteers, excellent planning, and the continued cooperation of the arena staff, who did all they could to make the process easy and safe for those being vaccinated.”

The clinic was moving so smoothly Friday morning that Burger and her two companions, Jan Buffum and Sandy Luedke, were able to get vaccinated before their actual appointment times, which were between 10 and 10:30 a.m.

The shot "didn't even hurt," said Buffum, who declined to give her age, describing herself as "formerly young."

She said she hopes getting the vaccine — a second dose is scheduled for Feb. 26 — will allow her to attend a grandson's wedding later this year.

Donna Wood, a 92-year-old Lincoln resident, reiterated that sentiment after getting her shot.

"It feels like freedom," said Wood, who is planning a fishing trip with her niece and nephew in May.

She said she was pleasantly surprised by how organized the process was and had no pain or other negative side effects after getting the shot.

Jack and Dee Farrall also said things ran smoothly. They parked in a garage about a block away and were approached by a volunteer from the Lincoln Area Agency on Aging who offered to give them a ride to the arena.

Jack, who is 80, said he appreciates what former President Donald Trump's administration did to expedite the creation of the vaccine. He said he remembers the polio epidemic, how scary it was and how relieved everyone was to get a vaccine.

“We were all really happy,” he said. “The polio vaccine was a godsend ... it feels quite a bit like this.”

Friday's clinic marked the first widespread vaccination of people in Phase 1B of the state's vaccination plan, which includes people 65 and older, those with certain medical conditions and essential workers.

Earlier this week, some members of local law enforcement were able to get vaccinated.

It will likely take several weeks to get through this phase and could be several months before vaccine is available to the general public, depending on what happens with supply. On Friday, Lopez said the county's vaccine supply has increased from 3,900 doses weekly to about 4,875 a week.

Burger said she looks forward to more people getting vaccinated.

"This is the only hope we have for this pandemic," she said, "so I hope everyone gets their shot."

Margaret Reist contributed to this report.

Lancaster County residents 80 and older to begin getting vaccine Friday

Health Department staff on Tuesday will begin calling residents who registered with the department and scheduling their appointments for a vaccination clinic to be held Friday at the Pinnacle Bank Arena.

Pace of vaccinations in Nebraska is increasing, although some are tardy in getting second shot

A top Nebraska pandemic official says the state’s vaccination program is building momentum and will add a new set of locations as soon as next week.

Their deaths raised the local pandemic death toll to 207, and so far, Lancaster County has confirmed 27,055 coronavirus cases, according to the Department.

The deceased was a woman in her 90s who had been hospitalized, the department said. The total number of COVID-19 deaths in the county is now 208.

The Health Department plans to hold vaccination clinics for residents 75 and older later this week, though details are being finalized.

Some coronavirus restrictions in Lincoln to ease as risk dial improves, more vaccine on the way

In addition to large events at Pinnacle Bank Arena on Friday and Saturday, Walmart has announced it will start vaccinations Friday at more than a dozen locations in smaller cities across the state.

Ricketts disagrees with Sasse's vote to proceed with trial against Trump

He also urged Nebraska Republicans who are demanding that the GOP's state central committee censure Sasse to contact the senator and "talk to him (about) why you are unhappy."

No local locations are among the ones that have been announced so far.

The clinics will provide vaccines to people with serious medical conditions that might make them more prone to COVID-19 complications, such as lung and kidney diseases and those with cancer.

The pharmacy has 200 doses that it will start distributing on Friday.

The African American-owned company has spent the past several months building COVID-19 testing pods. Now, the company is building shelters to help Nebraska with its work to vaccinate as many people as possible.

Sandy Luedke (from left), Jan Buffum and Lois Burger received COVID-19 vaccinations at an event for those in the Phase 1B priority group at Pinnacle Bank Arena on Friday.

People enter Pinnacle Bank Arena during a COVID-19 vaccination event for those in the Phase 1B priority group on Friday.

After receiving the COVID-19 vaccine, people wait for rides outside Pinnacle Bank Arena on Friday.

People wait after receiving a COVID-19 vaccination at an event for those in the Phase 1B priority group last Friday.

People enter a COVID-19 vaccination event for those in the Phase 1B priority group Friday at Pinnacle Bank Arena.