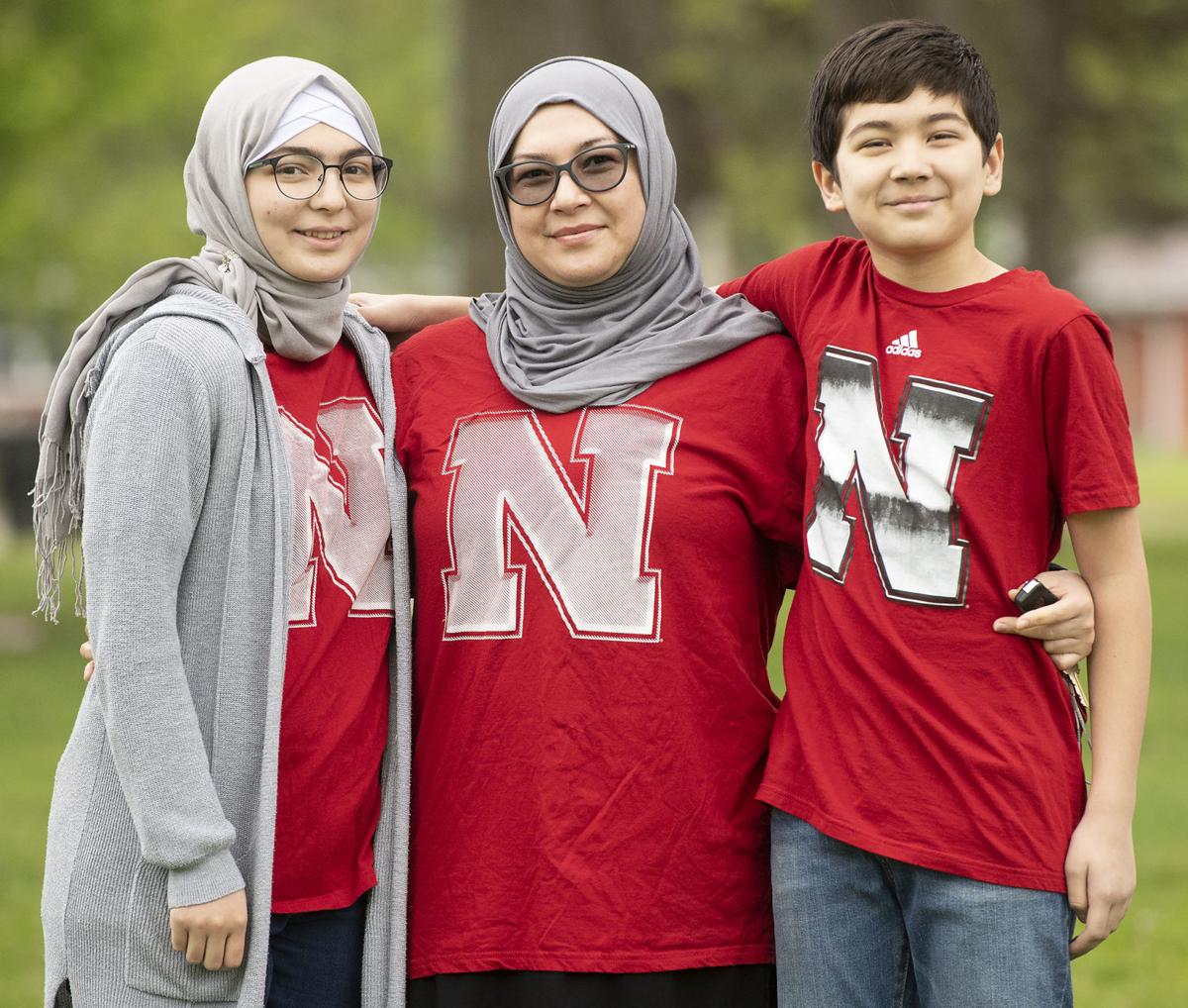 Nigora Aminova (center) and her children Saida (left) and Behruz on Wednesday. With the help of a Lincoln Literacy program, Nigora has become a certified nursing assistant and works at Bryan Health, both in patient care and cleaning rooms. 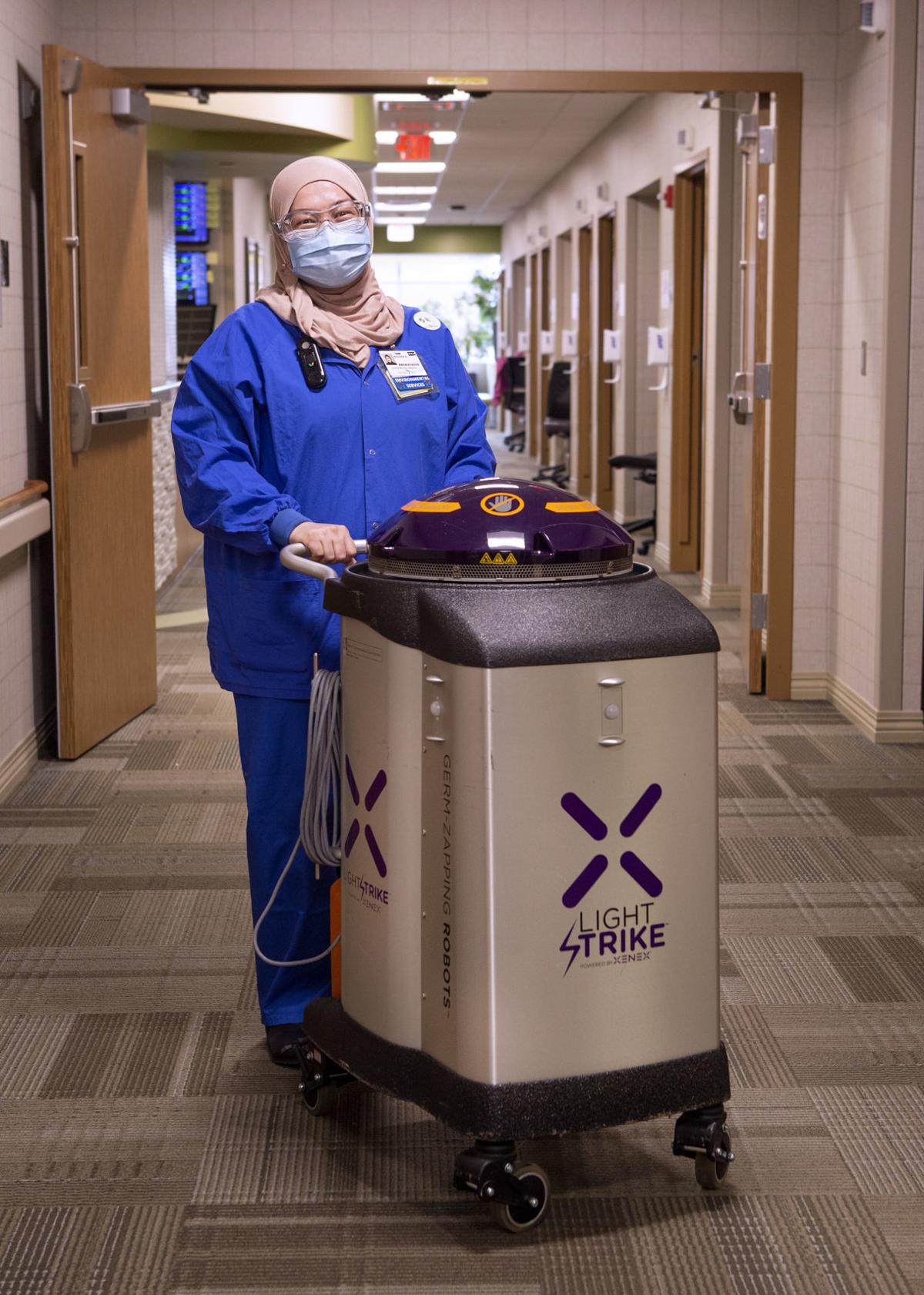 Nigora Aminova is not the front-line medical worker typically hailed in headlines during the coronavirus pandemic.

The asylum-seeker from Tajikistan came to Lincoln in May 2017 and began working at Bryan East Campus cleaning patient and other rooms.

Then last year, the single mother of two got into a Lincoln Literacy program that helped her polish her knowledge of medical terms in English to help her pass the exam to become a certified nursing assistant.

In December, she started as a patient care technician in the pediatric department. But then the pandemic struck and Bryan needed extra help ensuring rooms were clean and safe.

Aminova agreed to help out with her old job, where she uses an ultraviolet light germ-zapping machine to disinfect rooms, working 50 hours a week between both jobs.

"Even the small stuff that I do, I’m doing something right,” the 37-year-old said.

Aminova is one of dozens of recent immigrants who has helped to fill needed medical positions with assistance from the Lincoln Literacy CNA Prep Program, said Clayton Naff, Lincoln Literacy's executive director.

The program pairs participants with mentors in the medical field and reviews medical terms and concepts typically found on the CNA exam. Many of them have medical backgrounds, some having put careers on pause since emigrating from their home countries, he said.

"I think Nigora Aminova is a great example of just how dedicated and grateful refugees are when they get the opportunity to fulfill their potential, put the best of themselves to work," Naff said.

In Tajikistan, at her parents' urging, she studied economics and international negotiation in college and earned a bachelor's degree, but working to support her two children in the central Asian country became difficult.

A Sunni Muslim, Aminova wears a head scarf called a hijab when outside her home, but she faced harassment and government discrimination for doing so after her Muslim-majority country enacted a ban on them, she said.

She immigrated to the U.S. and moved to Lincoln following her brother, who came here in 2013, and took a job in environmental services at Bryan Health akin to one of the jobs she had when she left Tajikistan, she said.

But she found herself drawn to the medical field that many in her family had worked in. Her grandfather was a neurological physician, and her aunts were nurses, she said.

Unlike her economics classes, she found herself more useful in health care.

She was proud to take a new job helping pediatric and neonatal patients directly as a patient care technician, she said.

And although it wasn't ideal to resume her old job, she enjoys her co-workers and understands the work is vital, especially during a pandemic, she said.

While observing Ramadan, Bryan let her reduce her hours so she could safely fast, she said.

But she intends to pick back up where she left off, and she's humbled by the respect for her religious beliefs, she said.

Her story has inspired her daughter, who will be a high school senior next fall and dreams of her own medical career, she said.

And she's proud of the incremental steps she's been allowed to take in America to build a better life, a country where she said she found freedom.

"They gave me the hand to stand up," Aminova said.

The virus has torn through Westfield Quality Care of Aurora, a nursing facility with 64 beds in Hamilton County. Thirty-three residents, roughly half, have tested positive for the virus.

The setting for the ceremony was chosen to promote social distancing, but also because Chief Standing Bear signifies the equal protection under the law that all U.S. citizens are guaranteed, the judge said.

Nigora Aminova (center) and her children Saida (left) and Behruz on Wednesday. With the help of a Lincoln Literacy program, Nigora has become a certified nursing assistant and works at Bryan Health, both in patient care and cleaning rooms.