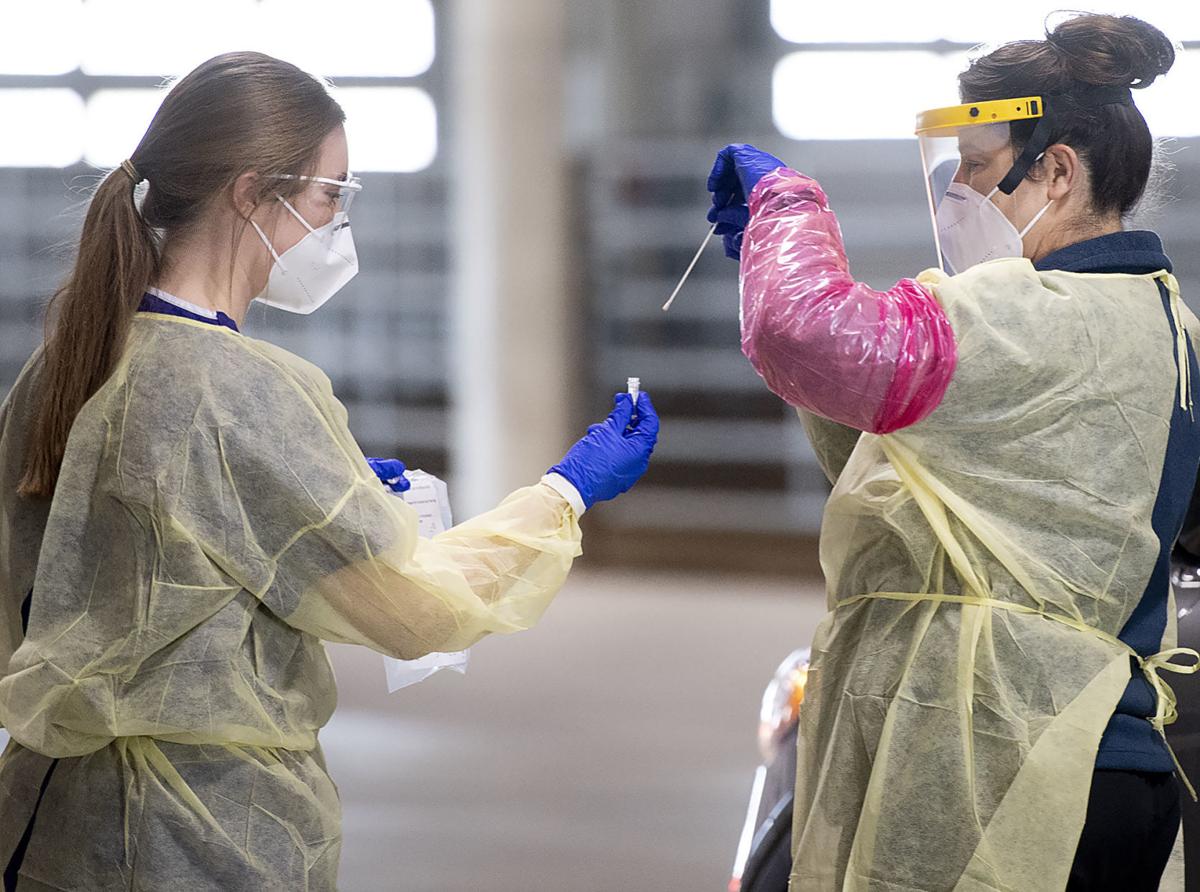 CHI Health workers place a COVID-19 swab in a test tube while administering tests by appointment at a drive-thru Test Nebraska site at Lancaster Event Center on May 8. 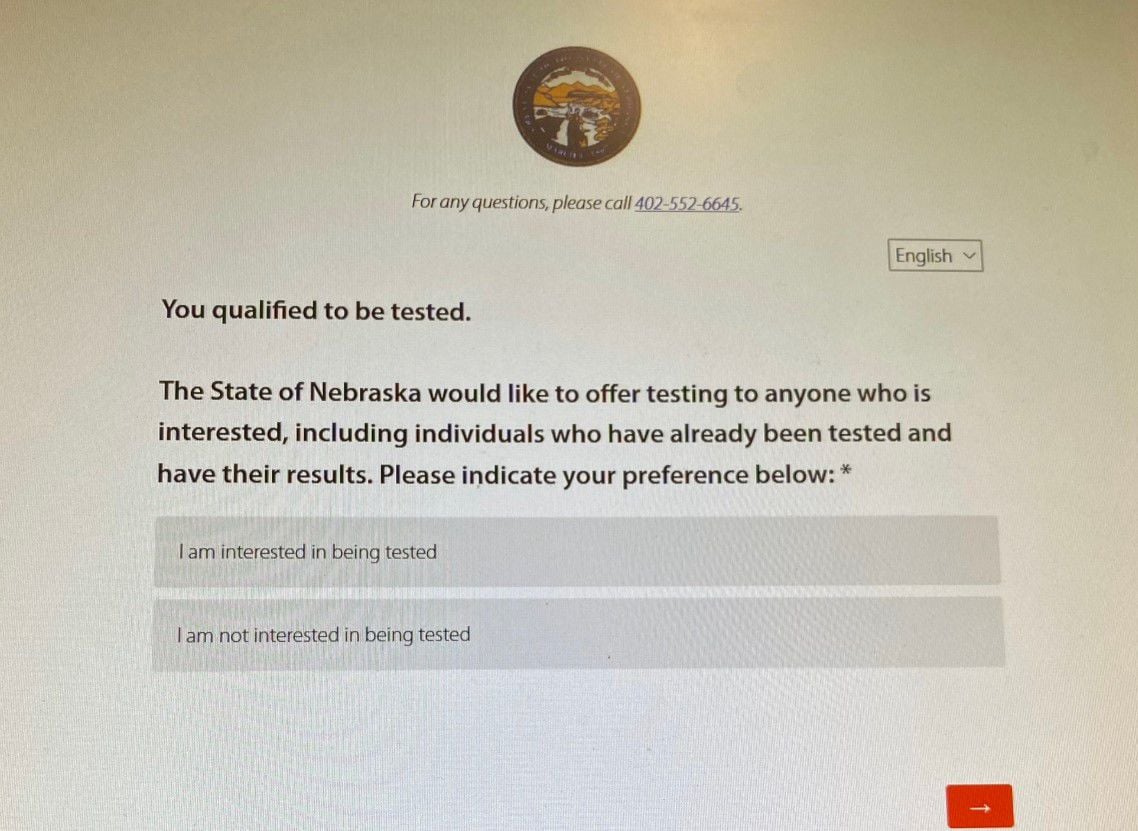 A screenshot from the Test Nebraska website that says the state is offering coronavirus testing "to anyone who is interested." State officials said testing is still being prioritized for those who exhibit symptoms, health care workers and first responders, however.

She wore a mask — and gloves, too, while they lasted — when venturing out of her apartment to work at a local pet food manufacturing plant, or to Walmart to purchase groceries.

Even with the added precautions, Kirk, 26, woke up feeling sick, exhausted and weak last Saturday, her temperature reading 100.8 degrees and rising.

"My body was cold but my face was on fire," she said.

On Monday, when her fever had climbed to 102 degrees, Kirk said she registered with Test Nebraska, a $27 million program launched by Gov. Pete Ricketts last month in partnership with three Utah-based companies.

The website told her she qualified for testing, Kirk said in a phone interview, but when she tried to schedule a test, she was told there were no times available.

"We apologize, all the appointments at that time slot have already been taken," the website said, according to a screenshot shared with the Journal Star by another person who described a similar experience. "Please select a new location and time."

A phone number included on the Test Nebraska website was also not working, Kirk said. She called multiple times, from her phone and her boyfriend's phone, but received an automated message the call could not go through.

"I was kind of bummed, and I gave up at that point," Kirk said.

Later that day, the Central District Health Department said the notification that no testing slots were available through the Test Nebraska initiative was an error. In fact, there were plenty of openings available, the department announced on its Facebook page.

Kirk was told if she drove to the testing site at Fonner Park she would be given "an override of sorts" to get tested by the Nebraska National Guard.

She completed the assessment a second time before driving through the testing location Tuesday, receiving a nasal swab from a uniformed member of the Guard, she said.

Although she had symptoms and qualified for testing through Test Nebraska, state officials chastised the Central District Health Department for inviting Kirk and others to come in for tests without scheduling an appointment through the website first.

"We have run initiatives with meat processing facilities through Test Nebraska where their teams can be assessed and tested without scheduling ahead of time," Taylor Gage, a spokesman for the governor, wrote in an email responding to questions from the Journal Star. "In Grand Island, CDHD attempted to open the assessment and test onsite process to the general public. This should not have occurred."

There are no plans to assess and test the general public through Test Nebraska, Gage added, and the goal for the program remains to test those with symptoms, health care workers, first responders and older Nebraskans.

The Central District Health Department did not return a phone call seeking comment.

Kirk, whose symptoms included a fever and a cough, said the confusion over who qualifies for the program and how to access testing has been frustrating.

The Test Nebraska website says the state "would like to offer testing to anyone who is interested, including individuals who have already been tested and have their results."

If that's not the case, Kirk says Test Nebraska's system still told her she qualified.

"This whole thing has been a mess," she said.

Public health officials have also raised concerns in recent days over how results from Test Nebraska mobile testing locations are being reported.

Teresa Anderson, health director of the Central District Health Department, said results furnished through the Test Nebraska program did not include addresses — a key data point in understanding where the virus is spreading in the community — and did not have a mechanism to provide results to health care providers in the area, according to an editorial in the Grand Island Independent on Wednesday.

The newspaper said the testing initiative deserved a "failing grade" for its work so far.

Ricketts responded to the criticism, saying while Test Nebraska was set up quickly to expand testing as directed health measures were set to expire, there would likely be some glitches.

"We rushed this to get it out as quickly as possible," he said at his afternoon news conference. "We certainly could have spent a month or two testing this, but we thought the better deal here was to make sure we had more testing."

The governor said it took time to integrate the data system maintained by Test Nebraska with the state's existing coronavirus dashboard maintained by the Department of Health and Human Services.

The data collected through the program began being provided to local health districts Tuesday evening, he said, calling the newspaper's editorial "premature" in its criticism.

Test Nebraska has also set up a new hotline staffed by employees from the Utah companies contracted to provide the testing service, who he said have experience with the platform, after the initial phone number answered by staff at the Nebraska Regional Poison Center became inundated.

Ricketts said he expects the early bumps experienced in the program to smooth out over time. The contract for Test Nebraska runs for a full year.

"It's been a week and a half," he told reporters on Wednesday. "It's a brand-new program."

The rush to quickly set up a new testing regimen using private companies new to the state has led to a group of state senators calling on Ricketts to cancel the contract before Tuesday, the last day to do so.

The senators said Ricketts should redirect the emergency funds appropriated by the Legislature for the coronavirus response to the existing health care system in Nebraska, and rely upon the expertise of the University of Nebraska Medical Center in combating the pandemic.

Lab managers from across the state also indicated they were blindsided by the new program and further impeded in their quest to secure more supplies, according to an email sent to the governor's office shortly after the Test Nebraska initiative was announced.

"Have you heard anything about this? I did see the Test Nebraska advertisement, but I don't have any details," wrote Jerel Katen, the lab director at Syracuse Area Health, to the hospital's administration. "It looks like the state has the cart before the horse."

"They do not realize that they are (unintentionally) working against us," he wrote in the April 22 email.

Another manager wrote that some health labs that had COVID-19 processing equipment available would be unable to get test kits for months since those items were being tied up with new government contracts.

Nomi Health, the company contracted to provide the tests, said earlier this week it has provided 200,000 kits to Nebraska. It is hired to provide up to 540,000 this year.

Test Nebraska has conducted 4,313 coronavirus tests at mobile testing locations in Lincoln, Omaha, Grand Island and Schuyler since May 4, the first day of the program, and will deploy next to Lexington and Norfolk.

To date, 144 positive tests have been returned, or about 3.3% of the tests administered.

Kirk said Thursday her fever has broken and she is feeling better, but remains self-isolated with a cough.

She expects to receive her test results on Friday.

How to prepare your home for cooler weather

Six Omaha police officers were positive for coronavirus, and 15 cases were reported at another Omaha nursing home.

Four of Lincoln's YMCA's will reopen on May 25. The Cooper YMCA, Copple Family YMCA, Fallbrook YMCA and Northeast YMCA will open their doors, …

If and when pools do open -- parks Director Lynn Johnson said there is no firm date for doing so at this point -- the pools likely won't look the same as they have in previous summers.

The tests will be performed at drive-up windows at four Lincoln sites via a self swab. Would you do it?

"I wouldn't be running this test in this laboratory if I didn't believe in it," said CHI Health St. Elizabeth lab director Becky Croner. "... If there is any reason I don't believe the results are correct, we pull it and run it again."

A technical glitch prevented results from coronavirus tests collected through Test Nebraska sites late last week from being reported over the weekend.

CHI Health workers place a COVID-19 swab in a test tube while administering tests by appointment at a drive-thru Test Nebraska site at Lancaster Event Center on May 8.

A screenshot from the Test Nebraska website that says the state is offering coronavirus testing "to anyone who is interested." State officials said testing is still being prioritized for those who exhibit symptoms, health care workers and first responders, however. 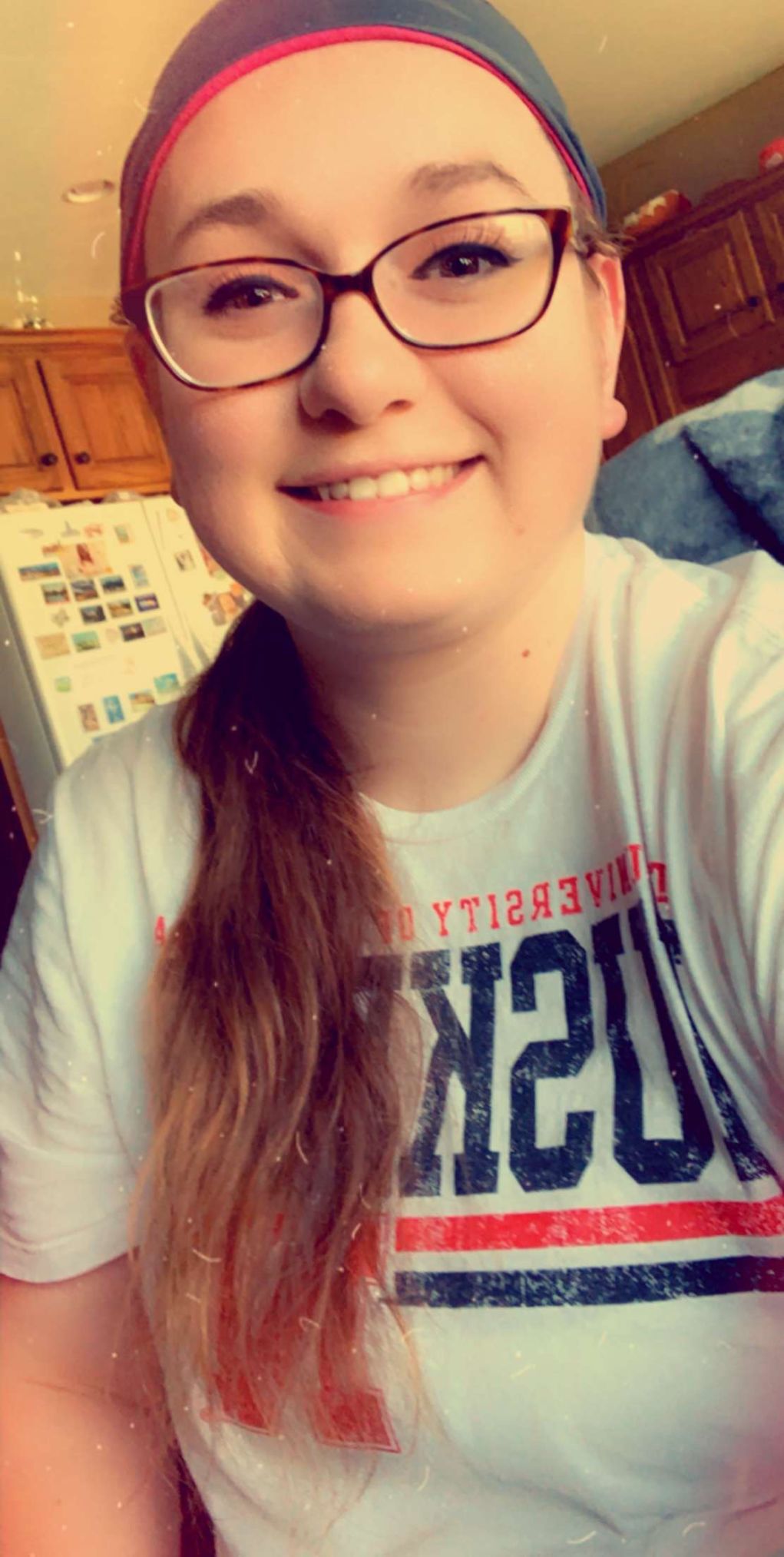