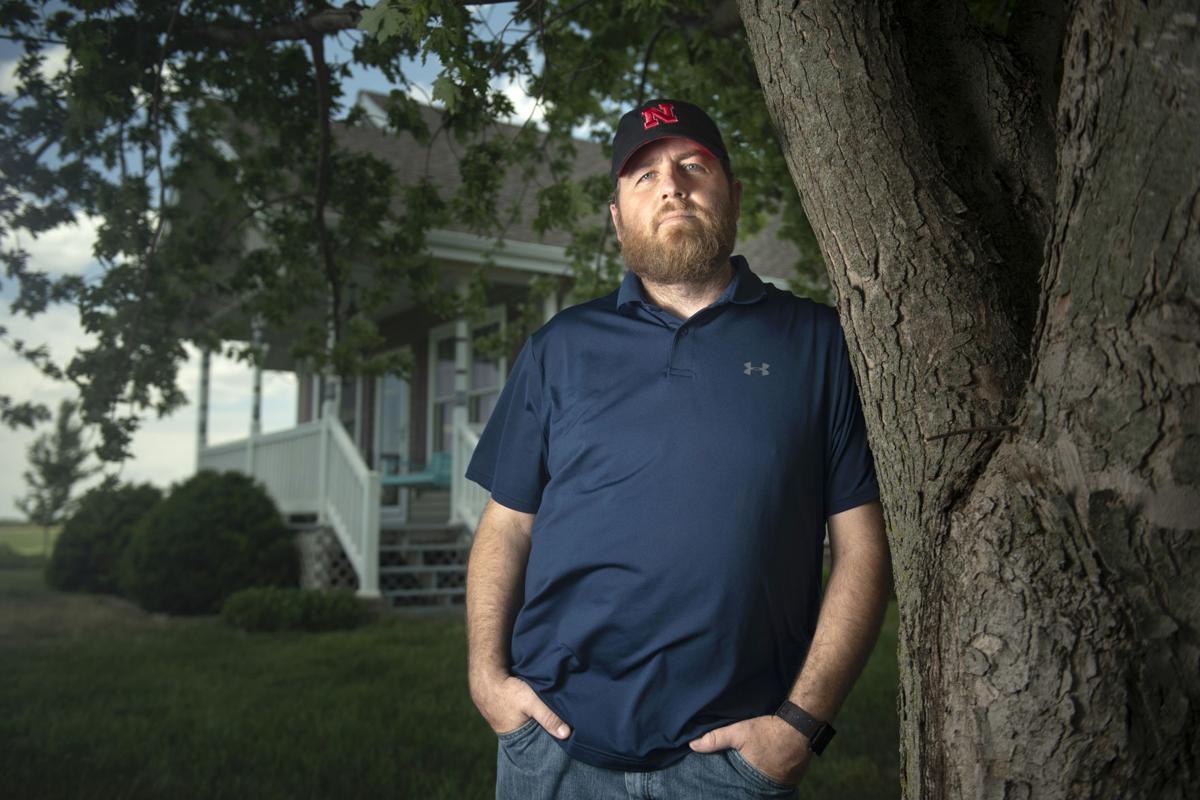 Quentin Bowen is back at his home in Richardson County after spending a week in the hospital battling COVID-19. 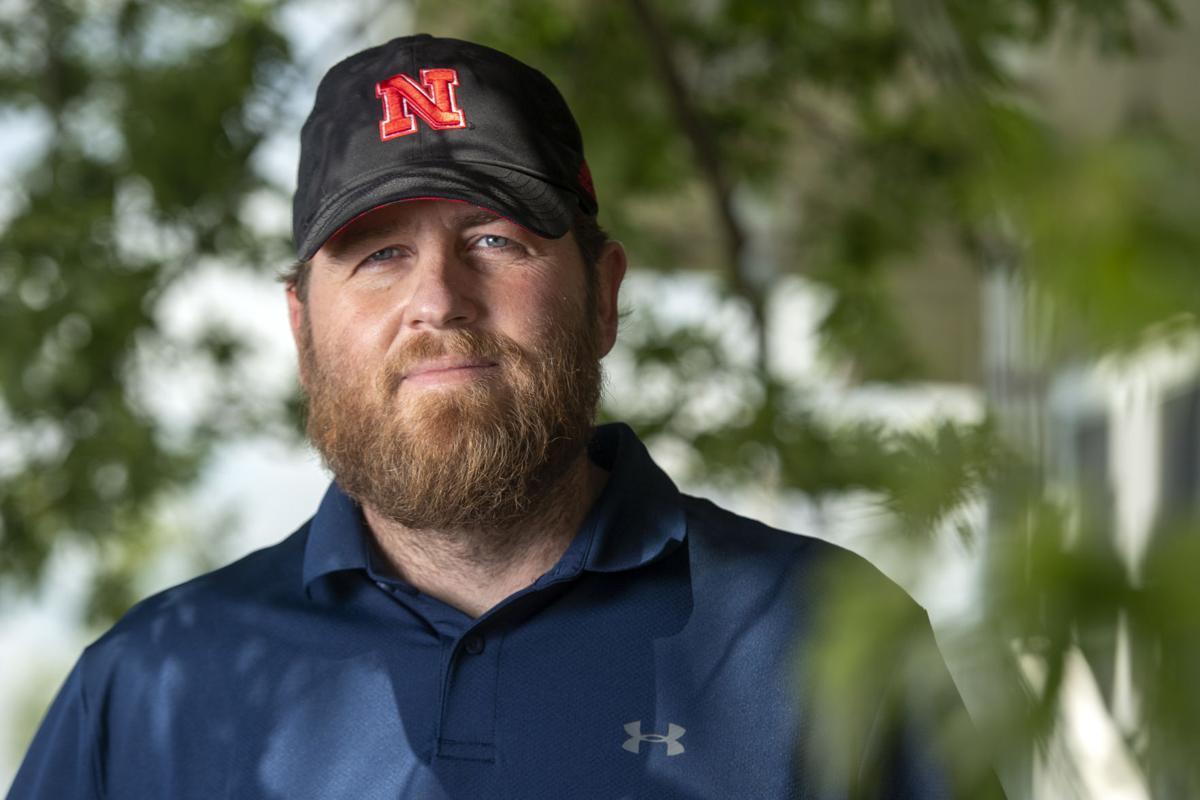 Quentin Bowen, who is recovering from a severe case of COVID-19, poses for a portrait Tuesday at his home in Richardson County.

Quentin Bowen believes the COVID-19 vaccine is safe and he believes it works. But because of a lack of time and some other circumstances, he didn't get it when it became available.

The 41-year-old farmer from Richardson County was busy on the farm — planting soybeans and tending to his hogs. He had also dodged the virus back in November when his wife and daughter had it and figured he was less at risk now with cases waning.

"I guess I thought I had time," he said.

But time wasn't on his side.

On May 15, right in the middle of planting season for his several thousand acres of soybeans, Bowen started feeling ill.

He said it started as chills in the afternoon. He went to bed early and woke up around 11 p.m. with a fever of almost 103.

At that point, Bowen figured he might have COVID-19.

He isolated himself, rested, took Tylenol and drank plenty of fluids, but after a couple of days, he didn't feel any better, so he called a local health clinic.

The staff at the clinic told him he should get tested for COVID-19, but they also told him there wasn't anything they could do for him if he did have it. So he stayed home.

Several days of self-care didn't do much for him. Despite taking Tylenol regularly, he couldn't get his fever to drop below 100. He also was coughing a lot, and an oxygen monitor his wife had gotten during her bout with the virus showed his levels would dip below normal at times.

On May 24, he finally gave in and went to the local clinic to get a COVID-19 test, which came back positive. His oxygen levels were OK that day, so he was sent home with a prescription for some cough medicine.

At that point, frustrated with a lack of progress in getting better, he went searching for other treatment options. A cousin who worked at Beatrice Community Hospital told him about infusions available there, and the next day he was able to get one.

He also got a a chest X-ray, which a doctor told him "looked like crap." The images showed he had viral pneumonia in both lungs.

A blood test also showed he had extremely high levels of D-dimer, a substance that indicates blood clotting. The doctor ordered a CT scan, which did not show any clots, so he was sent home.

At that point, Bowen said he thought he was getting better. His fever had finally broken after more than a week.

He did notice that his feet hurt a lot, however, which he chalked up to being up and around after spending several days mostly in bed.

Early the next morning, he woke up with a coughing fit and was having trouble breathing. A check with his wife's oxygen monitor showed his level was a dangerously low 75.

At that point, his wife took him to the emergency room in Beatrice, where another CT scan showed he had a "humongous" blood clot in his lungs.

That led to an ambulance ride to Bryan East Campus in Lincoln.

Bowen said having to tell his kids, ages 13, 11 and 2, that he was going to the hospital in Lincoln and they wouldn't be able to see him, "was about the hardest thing I'd done."

"There were a lot of tears," he said.

Bowen spent a week at Bryan, and though he didn't have to go on a ventilator, he spent five of those days receiving large amounts of oxygen given through a nasal tube as he struggled to breathe.

He also received blood thinners to help deal with the clots that were forming in his body.

Bowen said doctors at Bryan told him that his body had basically fought off the COVID-19 infection, but it was dealing with the aftereffects of what the disease can do.

"The doctors told me I wouldn't have been (in the hospital) if not for the clots," he said.

"I didn't imagine at all that would be the way it would try to kill me," Bowen said.

Doctors also told him he was lucky, because even though he didn't seem to be getting better, he wasn't getting worse.

"For being an unlucky son of a gun, I guess in a lot of ways I was lucky."

Dr. Kevin Reichmuth, a pulmonologist and critical care specialist who worked with Bowen at Bryan East, said he's seeing more and more younger patients, and they all have one thing in common.

"They're about as close to exclusively unvaccinated people as you can get," he said.

Reichmuth said that over the past month, he's seen about a dozen COVID-19 patients in the hospital, and only one has been vaccinated. And that patient was a woman in her 90s who was admitted for another reason and found out she was positive after getting tested in the hospital.

Another thing hospitalized patients have in common is that they are younger — about a decade younger on average than a few months ago, Reichmuth estimated.

The good news is that generally means they are less sick than the older populations that filled hospitals during the winter. However, he said he still sees plenty of patients who are really sick and need lots of oxygen support to get better.

Lincoln's number of COVID-19 hospitalizations lately has fluctuated up and down considerably, reaching as high as 16 on Tuesday before falling back to seven by Thursday.

Nebraska woman who was fully vaccinated dies of COVID-19

Reichmuth said he believes variant cases are likely playing a role in making younger people sick and in need of hospitalization.

Lancaster County has reported 209 variant cases as of Thursday, while the last report from the state was slightly more than 1,700 on June 16.

Nebraska has had very few cases of the Delta variant that was first discovered in India and has caused concern throughout the globe because is appears to be much more transmissible and also seems to cause more serious illness, especially in young people.

The state only sequences a fraction of its positive COVID-19 tests, however, so there are likely many more variant cases. The Centers for Disease Control and Prevention has estimated that the Delta variant already makes up 20% of cases in the U.S.

The good news so far is that vaccines, especially the two-shot versions from Pfizer and Moderna, appear to work well against variant strains of COVID-19, including the Delta variant.

Dr. Renuga Vivekanandan, chief of infectious diseases at CHI Health-Creighton, said people who are not vaccinated are at "high risk" of getting COVID-19, especially the Delta variant.

But for those who have been vaccinated, "there's a small chance you'll get it, but it will be milder," she said Tuesday in a call with news media.

Only about 0.1% of vaccinated people have been infected with COVID-19, and the percentage of severe cases resulting in hospitalization and/or death is infinitesimally small, just 0.000026%, according to the CDC.

Nebraska is solidly in the middle of the pack among states with about 51% of residents having gotten at least one vaccine shot and 47% having been fully vaccinated.

But vaccination rates vary widely by county. For example, Lancaster County is the only county in the state where more than half the population has been fully vaccinated, according to the CDC. In Richardson County, that number is 40%, a number that's still higher than in many other counties.

Of those who are eligible to be vaccinated — people 12 and older — more than 60% are fully vaccinated in Lancaster County, while in Richardson County, it's less than 47%.

Bowen's 13-year-old daughter got her first dose of vaccine last week, and he said his son, who turns 12 in August, will get vaccinated as soon as he is eligible.

Bowen said his wife is now fully vaccinated, and he plans to get his vaccine when he is eligible in a few months. People who receive monoclonal antibodies as a treatment when they have COVID-19 must wait at least 90 days before receiving a vaccination.

Bowen wishes he had gotten vaccinated when he had the chance. Though he's out of the hospital and back home, he is far from recovered.

He still has a terrible cough — "the COVID cough, they call it," he said — and tires easily, leaving him unable to do most of his normal farm chores.

He still uses an oxygen canister at night and said he will have to take blood thinners for at least six months to prevent clots from recurring.

When asked what he would tell people who are skeptical of the vaccine, Bowen was blunt.

"I would say trust the science, forget the politics and the social media, and get vaccinated," he said. "There's nothing in this vaccine that can do to you what this disease can do to you, so why take the chance?"

Most people want to keep old files on their devices

Most people want to keep old files on their devices

Nebraska's gap between urban and rural vaccination is widest in nation

Most of the counties with Nebraska’s lowest vaccination rates can be found in the Panhandle and the Sandhills. In one Sandhills county, figures suggest that only 11% of adults have been vaccinated.

Visiting hours are returning to normal, but visitors will still be required to wear masks.

Thurston County, home to Nebraska’s Winnebago and Omaha reservations, leads the state with nearly 67% of its 18-and-over population fully vaccinated.

Health Director Pat Lopez says it takes a minimum of five weeks to get fully vaccinated, which provides just enough time to get children 12 and older fully vaccinated before Lincoln Public Schools starts classes on Aug. 16.

What seemed like just a cold in November led to complications for Marli Stone. The basketball and softball player at Crete High School could barely make it up the floor during basketball games.

Quentin Bowen is back at his home in Richardson County after spending a week in the hospital battling COVID-19.

Quentin Bowen, who is recovering from a severe case of COVID-19, poses for a portrait Tuesday at his home in Richardson County.