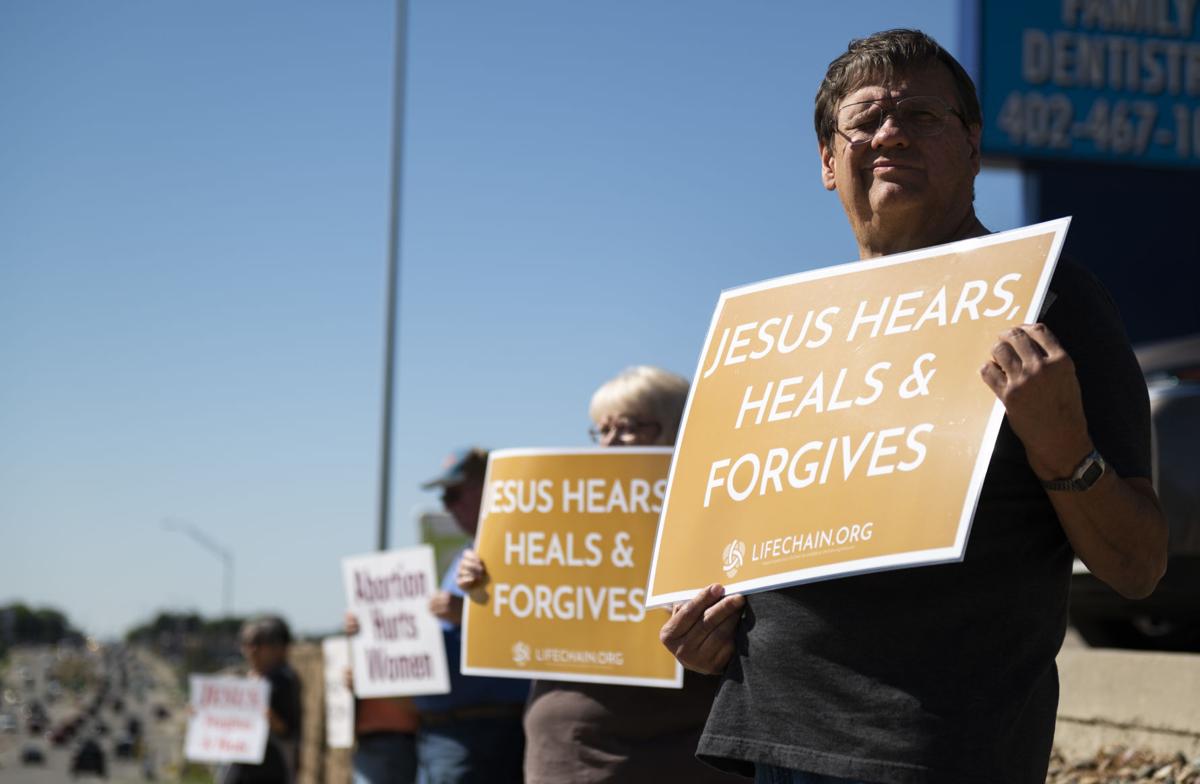 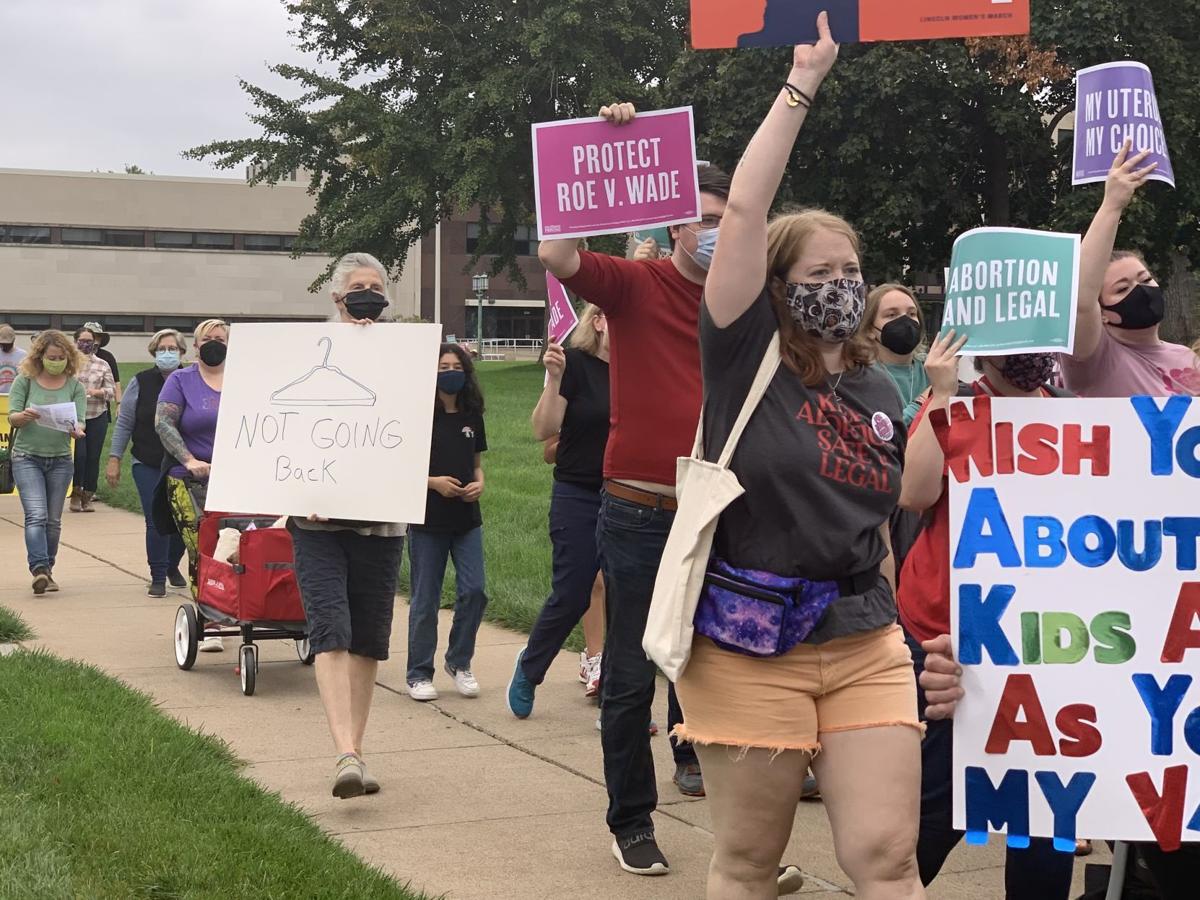 Abortion-rights marchers loop around the capitol on Saturday.

Chants of “My body, my choice” and “Keep it lawful, keep it safe” echoed off of the Nebraska Capitol on Saturday. On Sunday, there was silence.

The Lincoln Women’s March, along with Planned Parenthood Advocates of Nebraska, led a march in support of reproductive rights at the Capitol Saturday afternoon. A diverse crowd of abortion-rights supporters filled the Capitol’s landing, before marching around the building and chanting to show their support for upholding Roe v. Wade and ending abortion bans.

Life Chain is a national anti-abortion organization, with its title prayer service hosted annually on the first Sunday of October. Its core values are advocating against abortion and doing so respectfully, peacefully and prayerfully, according to its website.

In stark contrast to the march the day prior, the prayer service spent the afternoon mostly in silence, with the exception of the midday traffic. Participants prayed for the end of abortion in America, and many held signs with messages such as “Abortion kills children” and “Defend life.”

“Every child is created in God’s image for His purpose, and I don’t believe anybody has the right to terminate that human life,” Cook said.

Though there were hundreds of people at Sunday’s Life Chain, Cook said that back in the '90s the turnout was much larger.

“I think it may have to do with churches not wanting to get involved with the issue, and that’s a tragedy in my opinion,” Cook said. “If you’re going to be a church of Jesus Christ, you’ve gotta stand up for the sanctity of human life.”

At Saturday’s abortion-rights march, Lynn Zeleski sat in a chair with her husband standing beside her, and told the story of her own life-saving abortion in 1982. Abortion rights are so important to Zeleski, who lives in Hastings, that Saturday was one of her only outings since the start of the pandemic.

“I want to make sure all women have access to good, quality health care … I see us sliding so far back, to the way it was back in the day before Roe v. Wade,” Zeleski said.

Last month, Texas passed a law that is the nation’s biggest curb to abortion rights since the court announced in its landmark 1973 Roe v. Wade decision that women have a constitutional right to abortion. The law prohibits abortions once medical professionals can detect cardiac activity, which is usually around six weeks and before some women know they’re pregnant.

Some, like Zeleski, fear the implementation of a similar bill in Nebraska. But others, like Cook, say that is exactly what the state needs and that the Texas law affirms the humanity of fetuses. Gina Steele, a participant at Sunday's Life Chain, said she would absolutely like to see a similar bill passed locally.

“I was very happy to see that bill passed, I think it gives dignity to the women and to the children,“ Steele said.

Republican Sen. Suzanne Geist of Lincoln, who in 2020 led an effort to pass a law that bans dismemberment abortions, said she has no plans to introduce more abortion legislation when senators return to the Capitol in January. But she feels a bill like the one Texas passed would be supported by the majority of Nebraskans.

“Those who are pro-life are definitely pro-life, and that is legislation that I think is reflective of that,” Geist said. “I think it would definitely be an uphill battle, but I do think that the majority of the state of Nebraska is pro-life and I think it would ring true to who constituents are.”

Across the aisle, Sen. Megan Hunt, a Democrat, said she expects to see a bill mirroring the one in Texas eventually, though she is determined to do what she can to prevent similar legislation from being enacted.

“We have known that the day that abortion access would be challenged at the Supreme Court is coming," she said. "We know that these bills are being introduced in states all around the country, it’s not a surprise, it’s not a secret, because abortion access has been systemically under attack in this country for decades.”

An abortion case already on the Supreme Court's calendar for December involves Mississippi, which is asking the justices to be allowed to enforce a ban on abortion after 15 weeks of pregnancy. The Mississippi law was enacted in 2018 but was blocked after a federal court challenge.

Other abortion cases are waiting in the wings. Among the new appeals are cases from Arkansas and Missouri over their laws limiting abortions of fetuses with Down syndrome. Lower courts blocked those laws, but an appeals court upheld a similar law in Ohio.

Hunt said she has plans to reintroduce a bill in January that would make it possible for patients to utilize medication abortion services through telehealth. It will be the third time the bill has been introduced, and Hunt said she will keep introducing it until it passes, and keep introducing proactive legislation regarding reproductive rights.

“The effect of (abortion bans) are putting shame and stigma on people about their own health and their own wellbeing,” Hunt said. “That’s something that really has public health implications for everybody.”

As the right to an abortion is called into question nationwide, Nebraskans, like those in many other states, wait on the precipice. Hunt urges people to support their local clinics and funds. Cook and those at Lincoln Right to Life will continue their advocacy as well.

“I don’t condemn anybody, as a Christian I love and support people, I just want to educate them to know the truth,” Cook said. “We just hope and pray that we can overturn Roe v. Wade.”

Reach the writer at rholladay@journalstar.com

Watch Now: Tricks to get the most out of your tech devices

Watch Now: Tricks to get the most out of your tech devices

Five of the best foods for lowering blood pressure

Five of the best foods for lowering blood pressure

Lawrence Ortiz, 92, was sentenced to life in prison for first-degree murder in Buffalo County, beginning his sentence in February 1971. He also received 10 to 15 years for assault by a confined person in Lancaster County.

The suit, filed by Ohio Attorney General Dave Yost in U.S. District Court in Cincinnati, was joined by 11 other states, including Nebraska.

The Biden administration's new rules allow family planning clinics like Planned Parenthood to make referrals to abortion providers. Under the Trump administration, such referrals were banned.

Two Nebraska communities of fewer than 1,000 people have passed abortion prohibitions, while two more have taken initial votes on similar measures. But experts question the constitutionality of the bans.

Abortion-rights marchers loop around the capitol on Saturday.