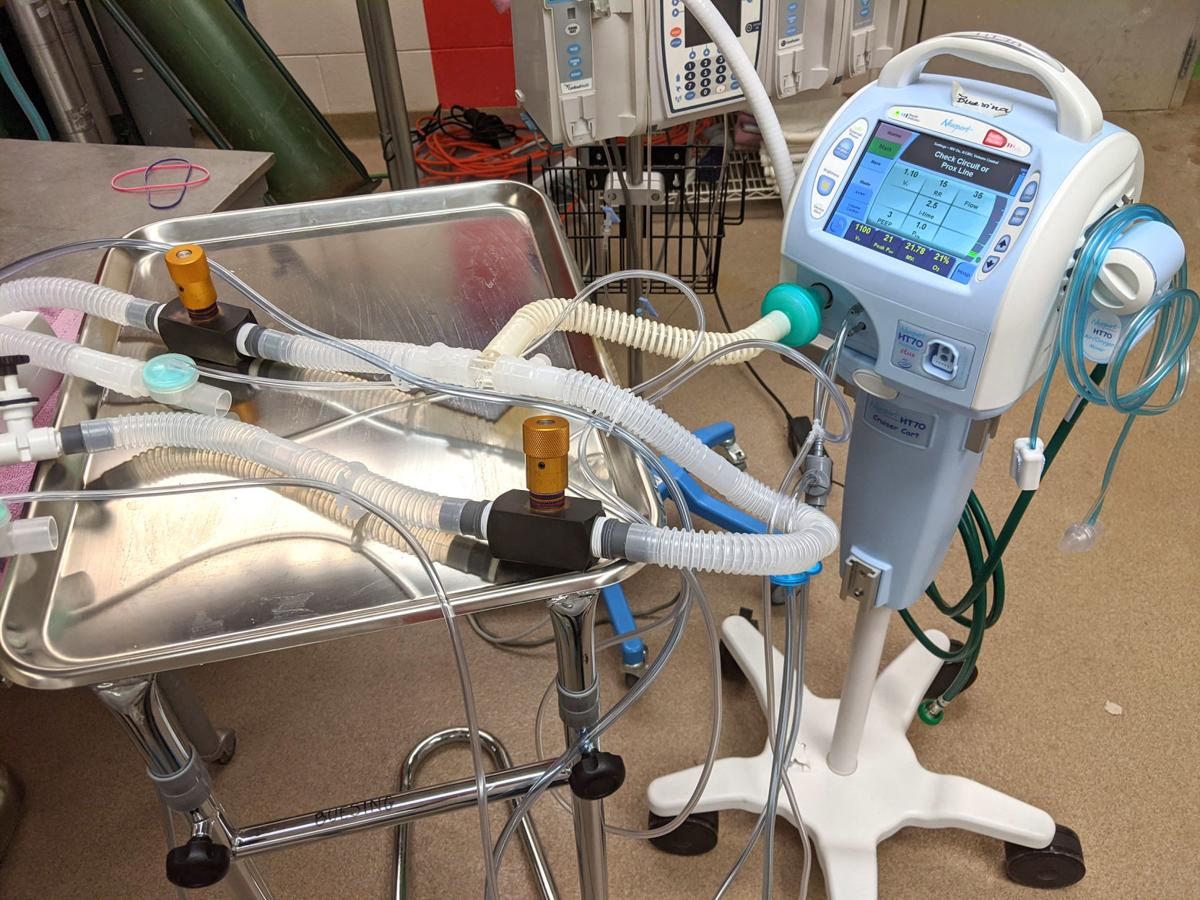 The variable flow restrictors (black and gold pieces) would allow patients of different sizes, diagnoses or states of disease progression to share the same ventilator. 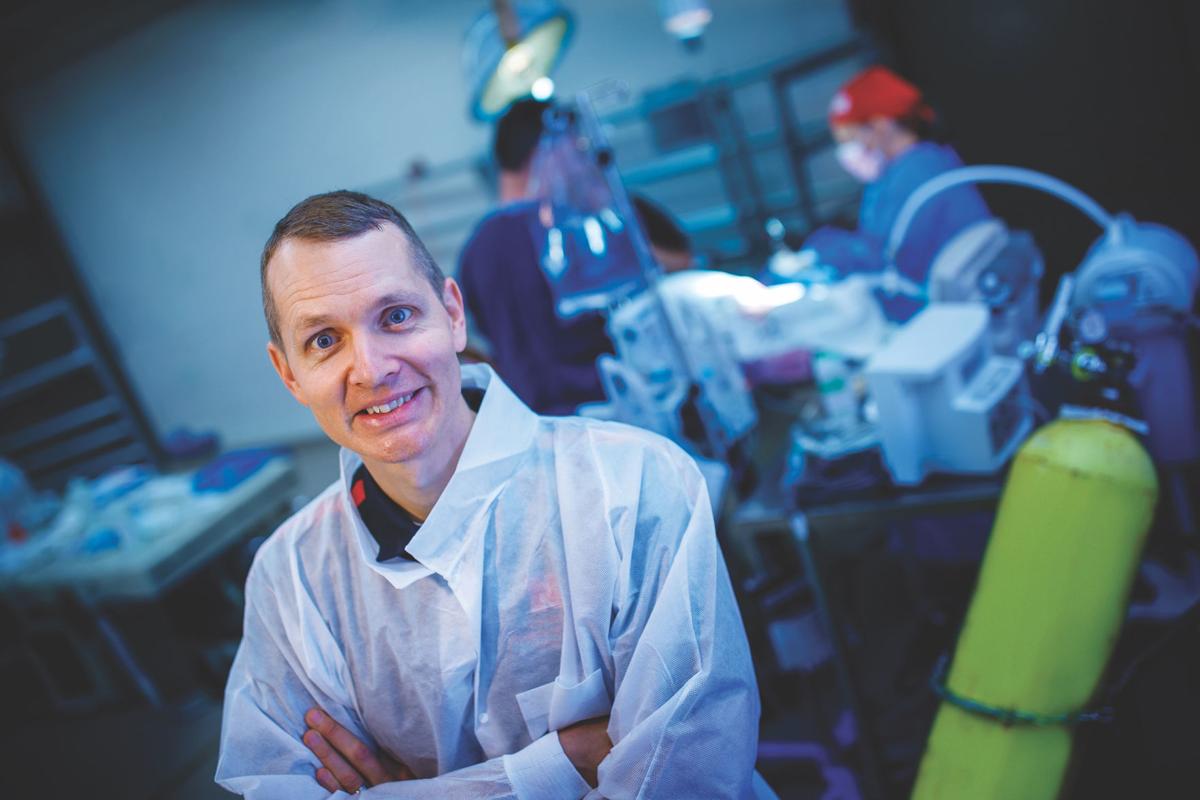 While only a small percentage of patients infected with coronavirus develop acute respiratory distress syndrome, or ARDS, the U.S. has a limited supply of ventilators used to treat the condition.

An April 1 report from the Johns Hopkins Center for Health Security noted there are fewer than 175,000 ventilators available to hospitals across the country.

The shortage was the subject of pleas from front-line health care workers in New York City hospitals overrun with patients needing a ventilator earlier this month as the global COVID-19 pandemic took hold.

Using tubing and a variable-flow resister available at hardware stores, the team led by UNL's Benjamin Terry and UNMC's Dr. Keely Buesing found it was possible — at least in a pinch — to safely ventilate two patients on one machine.

State to use UNL's Harper Hall as quarantine unit

"I've talked to my colleagues, and we agree that if we're looking at two patients and their families, we don't want to have to make a decision as to who gets the ventilator," Buesing, a trauma critical-care surgeon at UNMC, told Nebraska Today earlier this week.

Terry and Buesing's team has worked extensively on therapies to treat lung ailments such as ARDS, commonly signaled by inflammation and fluid buildup, allowing it to quickly pivot to the crisis that was all over the airwaves, said Nathaniel Zollinger, a graduate student in the College of Engineering.

"We realized our past experience and past research put us in a good position to apply it to the current pandemic and test different solutions for the problem the nation is facing right now," he said.

Stacking two patients on one ventilator isn't as easy as splitting the machine's tubing into two, explained Zollinger, a Wyoming native and graduate of Utah State University.

Innovation Studio, Kawasaki tool up to fill order for thousands of face shields

The ventilator needs to be able to meet the individual needs of the two patients, which may differ greatly.

"By putting a variable-flow resister in line with the standard off-the-shelf respiratory circuit, you could solve the problem of being able to direct the right amounts of oxygen to the patient without adversely affecting the other one," he said.

Like those found in underground sprinkler systems, the variable-flow resister costs about $120 at a big-box store — that's for an upper-end model, according to Terry, an associate professor of mechanical and materials engineering — but it allows the airflow to be tailored more precisely to a patient's needs.

Connected to standard tubing, and with a three-way valve attached to the ventilator's pressure lines, clinicians can increase or decrease the oxygen volume to one patient without changing the flow to the other.

Zollinger said the biggest challenge to overcome was fabricating parts that connected the medical equipment to the industrial equipment: "These two industries aren't designed to work together, so we had to 3-D print some special adapters."

With the new system in hand and successful tests on a pair of lung-simulating balloons, the team recently completed a series of animal trials approved during the national emergency and funded through UNL's College of Engineering and the Office of Research and Economic Development.

Tested on pigs, one healthy and one with an induced lung injury, the university researchers found the stacked ventilator system maintained both for four hours, according to a YouTube video the team produced showing their findings.

But Zollinger said the practice, if adopted, should only be used when no other options are available.

Ventilators are not designed with multiple patients in mind, he said, and might not have the power to sustain two patients. Terry and Buesing also warned that ventilator stacking may require more human labor to set up and monitor the machines, which could create a crunch in an already stressful situation.

Zollinger said the UNL and UNMC team, which included Benjamin Wankum, Riley Reynolds, and alumna Andrea McCain, isn't putting forward its findings as a prescription, but as a proof of concept that ventilator stacking works and could be used to buy precious time until a more permanent solution can be found.

"It's a worst-case scenario, last-ditch effort thing," Zollinger said, "but it gives doctors one more tool in the bag."

Contact tracing, a kind of connect-the-dots for tracking how a disease spreads in a community, has been deployed to manage everything from outbreaks of sexually transmitted diseases to a recent flare up of the measles in New York.

Tips on how to quit smoking for good

How to eat healthy when ordering takeout

How to eat healthy when ordering takeout

The variable flow restrictors (black and gold pieces) would allow patients of different sizes, diagnoses or states of disease progression to share the same ventilator.