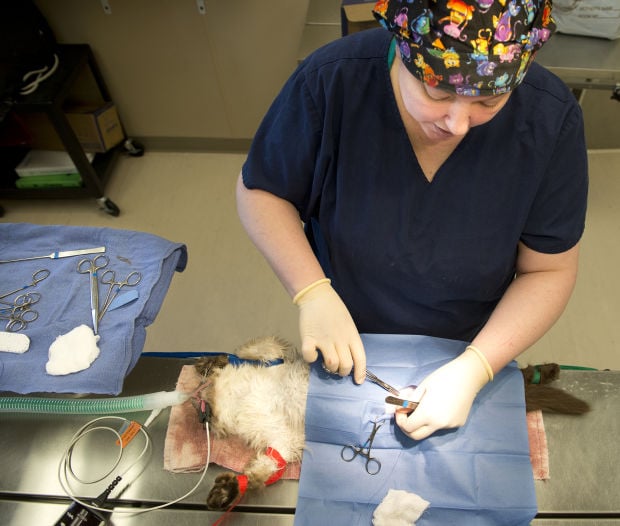 Veterinarian Laura Andersen spays a 6-month-old female cat that will be a special needs adoption at Capital Humane Society. Last year, the Humane Society spayed and neutered over 1,700 pets before adopting them out. 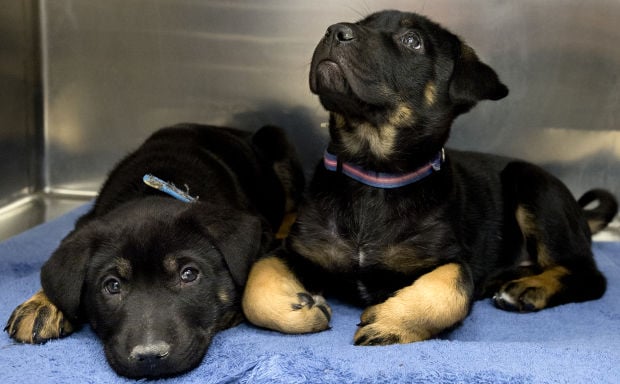 Six-week-old German shepherd mix puppies await their turn for neutering and spaying at Capital Humane Society. All altered pets are given a small ink tattoo, so if the animal is returned to the Humane Society, staff members know it does not need the surgery. 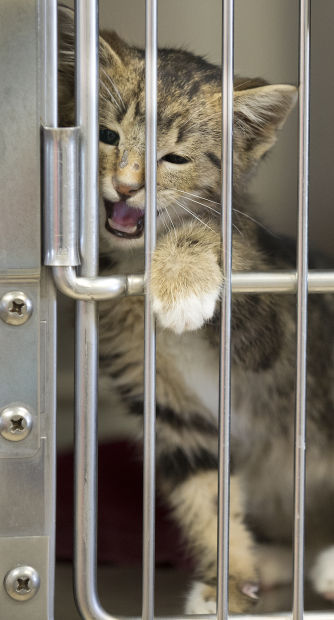 Eight-week-old kitten Jordache looks for attention before being neutered at Capital Humane Society. The Humane Society spays and neuters all dogs, cats and rabbits before they become available for adoption. 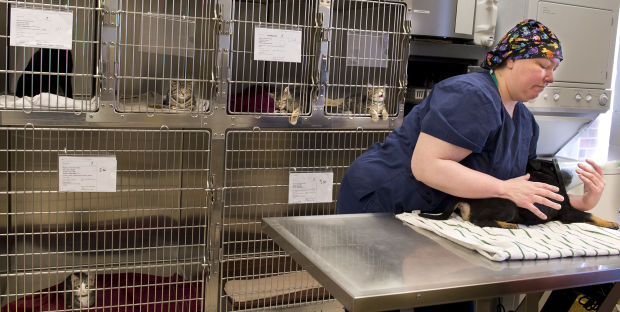 The 2014 Winter Olympics brought worldwide attention to the overwhelming stray dog population in Sochi, Russia, with numerous athletes working to bring these unwanted pooches back home.

The story is heart-warming and heart-wrenching. More importantly, it gives a real-life, vivid lesson of what happens if unaltered dogs (as well as cats) are left to their own instincts.

Yes, Sochi has a pet problem.

But so does nearly every community in America. Over-population is the No. 1 killer of pets in the United States. Annually 2.7 million dogs and cats -- about half of those brought into animal shelters each year -- are euthanized, according to the Humane Society of the United States. Every 11 seconds in America, one healthy, homeless pet is killed -- usually to make room for another unwanted pet whose odds of adoption are 50-50 at best and far worse if it just happens to be older, larger, black in color or feline, statistics show.

Locally, the Capital Humane Society euthanized 380 dogs and 2,020 cats in 2013 -- roughly the population of Kimball. Most of those animals died because space was running out and nobody adopted them.

Of the millions of animals euthanized every year, many are surrendered for behavior issues that could’ve been prevented by early spay and neuter, said Dr. Megan Ehlers, a Lincoln veterinarian.

While the animals pay the ultimate price, the cost to taxpayers is hefty -- local and state governments shell out $2 billion a year just to shelter and destroy unwanted pets, HSUS said.

The toll could be far far less if people just spayed and neutered their pets, said Bob Downey, director of the Capital Humane Society.

Tuesday is World Spay Day. Now in its 20th year, the day is designed to educate and promote the benefits of spaying -- or neutering -- your pet. It falls at the end of Spay/Neuter Month.

Simply put, there are not enough humans to adopt all these pets.

Each day 10,000 humans are born in the United States -- and each day 70,000 puppies and kittens are born, according to Spay USA, a national organization promoting spaying and neutering.

“As long as these rates exist, there will never be enough homes for all the animals,” Spay USA wrote on its website.

It is estimated that one unspayed female and one unneutered male can result in 67,000 puppies over a seven-year period, according to a study by Appalachian State University, Boone, N.C.

The numbers are six times higher for unaltered cats -- with an estimated 420,000 kittens resulting, the study found.

People have funny views about spaying and neutering. Pauline Balta, coordinator of Lincoln Animal Ambassadors Low Cost Spay/Neuter Program, has heard every excuse in the book for not spaying or neutering their dogs and cats. Nearly every one of them is misguided or flat-out wrong, she said.

Dogs and cats do not mourn the loss of their ability to reproduce. Their personalities do not change, nor do they turn fat and lazy after being spayed or neutered, Balta said.

In fact, spaying and neutering improves an animal’s quality of life and longevity; significantly reduces health risks such as reproductive cancers and pyometra, a deadly uterine infection; and diminishes animal aggression and roaming, Balta said.

While it is true that spaying and neutering can be expensive -- prices range from $80 to $600 depending on the size and gender of the animal -- there are lower cost options offered by many veterinarians and pet groups. And even at full price, spay/neuter surgery is a minor expense compared to costs of raising, vaccinating and taking care of medical complications caused by unplanned pet pregnancies, Balta said.

Every animal at the Capital Humane Society is spayed or neutered before it is placed up for adoption. Last year, of the 2,400 dogs and cats finding new homes through the Humane Society, 1,733 needed to be altered before leaving.

Most pet rescues also spay/neuter animals before they are placed with families.

And since starting its low-cost spay/neuter program in June 2010, Lincoln Animal Ambassadors has helped fund the procedure for 655 dogs and 631 cats. LAA works with eight Lincoln area veterinary offices to provide the surgery at reduced cost, issuing vouchers to assist pet owners in covering the bill.

For Ehlers, who donates part of her services to the program, it is conviction of compassion.

“I think animals are the only source of happiness for some people, and if we can help improve that bond and help control the population of pets in our area, we are happy to help,” Ehlers said.

She also has seen what happens when intact pets wander or stray to be closer to another intact animal.

“We have grieved with many clients whose pets have run away or been injured after running away because of this,” Ehlers said.

Bottom line, according to Balta and Downey -- everyone benefits when pets are spayed and neutered.

“It does the community of Lincoln as a whole -- pet owners and non-pet owners alike -- a huge favor,” Downey said. “If you have a community where you have strays running all over the place, the cost of animal control programs can get very, very high. If Lincoln did not have the level of spaying and neutering that it does, animal control would probably have a budget double what they do -- and that affects everybody.

“Spaying and neutering helps with aggression issues and the desire to roam, and that affects public safety, which is important for everybody,” Downey said. “Not only does spaying and neutering prevent pet over-population -- which to me is the most important -- but it helps create a safe environment for the entire community and helps with tax dollars.”

To apply for low cost spay/neuter

To find out more about Lincoln Animal Ambassador’s low-cost spay/neuter program, call 402-817-1168 and leave a message. Someone will return th…

Myth vs. fact in spay/neuter debate

Myth: It is better for a female to have one litter before being spayed.

Top 10 reasons people give up pets

Veterinarian Laura Andersen spays a 6-month-old female cat that will be a special needs adoption at Capital Humane Society. Last year, the Humane Society spayed and neutered over 1,700 pets before adopting them out.

Six-week-old German shepherd mix puppies await their turn for neutering and spaying at Capital Humane Society. All altered pets are given a small ink tattoo, so if the animal is returned to the Humane Society, staff members know it does not need the surgery.

Eight-week-old kitten Jordache looks for attention before being neutered at Capital Humane Society. The Humane Society spays and neuters all dogs, cats and rabbits before they become available for adoption.