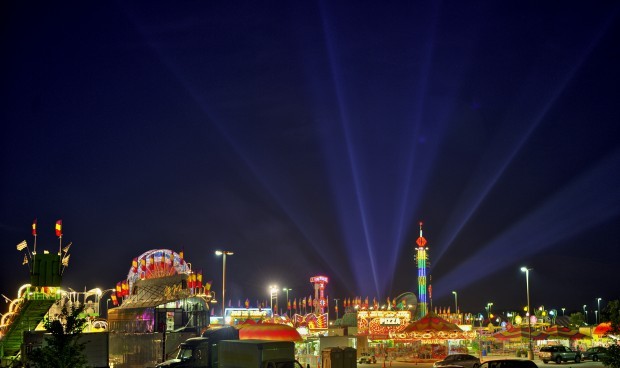 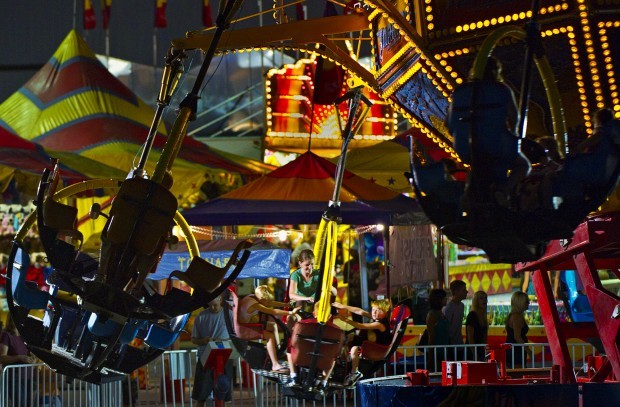 One of the super-ifications of this year's Lancaster County Super Fair is a beefing-up of the midway.

The rides are bigger, and there are more.

The carnival features about 25 rides this year, including a few new-to-Lancaster County entries, like the 90-foot-tall Super Shot Drop Tower.

Reporter Zach Pluhacek and I (both crybabies when it comes to fair rides and -- let's be honest -- when it comes to life) thought it would be, er, fun to ride and review all 25-ish rides on the first night of the fair.

Here's how the gameplan evolved on Thursday:

10:30: Seven rides. I discovered I couldn't ride several little-kid rides unless I had a little kid with me, and I didn't have one.

Here's a closer look at those seven.

The skinny: Something of a mid-level family ride; more amped than the carousel, less than the Super Shot. It's a colorful little two-story rollercoaster with a train like a worm.

Verdict: Not bad; a good ride for families. You gotta love the "whimsical flower light post" decorum and the quasi-terrifying expression on the face of the gap-toothed worm train.

The skinny: Several arms rotate on a vertical axis, each arm supporting a few cars. As the central axis rotates, so does each car cluster.

Verdict: This was the worst experience I've had in at least five years. So, inversely, for people who LIKE this kind of thing, it's pretty rad. Only later did I read the ride's sign, which warns the Orbiter "is designed for more mature and experienced riders."

Sickness factor: 9 (10 being an alien bursting out of my chest, killing my friends and eating my face)

The skinny: You know, it's a Ferris wheel. A reasonably small one.

Verdict: A nice, serene reprieve after the Orbiter

The Skinny: An extremely popular carnival ride, the Cliff Hanger simulates hang-gliding. The ride rotates a series of kite-topped gondola cars around the axis at an angle.

The skinny: The base of the ride spins cars around at 10 RPM at a tilted 20-degree angle. Riders have the option of spinning their individual cars by turning a wheel in each bucket.

Verdict: It rides like the Orbiter Jr. Not painful (i.e., AWESOME!) but appropriate for the less "mature and experienced riders."

The skinny: Fair staff told me this is one of the tallest mobile rides in the country. Twelve passengers load into the Super Shot seats and are taken (sloooowwwly) to the peak of the 90-foot tower, then dropped and braked at the base with a magnetic stopping system. The freefall feels like 3Gs or more.

Verdict: This was the worst experience I've had in at least seven years. The drop's mercifully quick, but the buildup is excruciatingly sluggish, which, of course, is the point. Thrill junkies will lap it up.

The skinny: A staple. Two 16-passenger gondolas rotate up in the air on separate arms, one moving clockwise, one moving counter-. The gondolas swing back and forth until they begin going in full revolutions. Eventually, the ride reverses directions.

Verdict: The Kamikaze's great. The swing isn't too terrifying, and the moments in which you're suspended upside-down aren't as bad as you'd think. But the Kamikaze was my last ride of the evening, so ...

Horticulture judges have evaluating fruits, veggies down to a science

Kevin Smith still remembers his first blue ribbons from more than 40 years ago -- they were for tomatoes, sweet corn and chrysanthemums.

This year, the Lancaster County Fair has a new division of competition called Unique Individuals and Situations for adults with physical and intellectual disabilities.