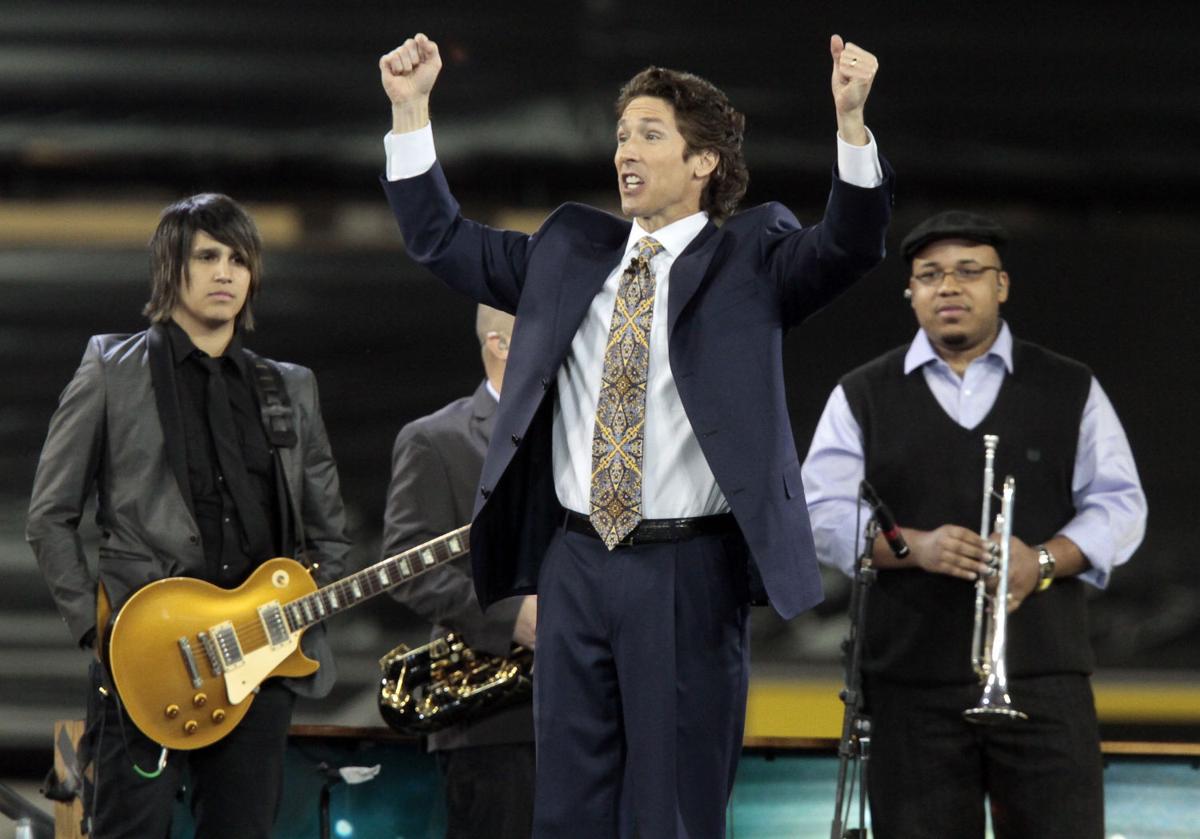 Celebrity pastor Joel Osteen (center) leads his congregation in prayer during his "A Night of Hope" event at Dodger Stadium in 2010. 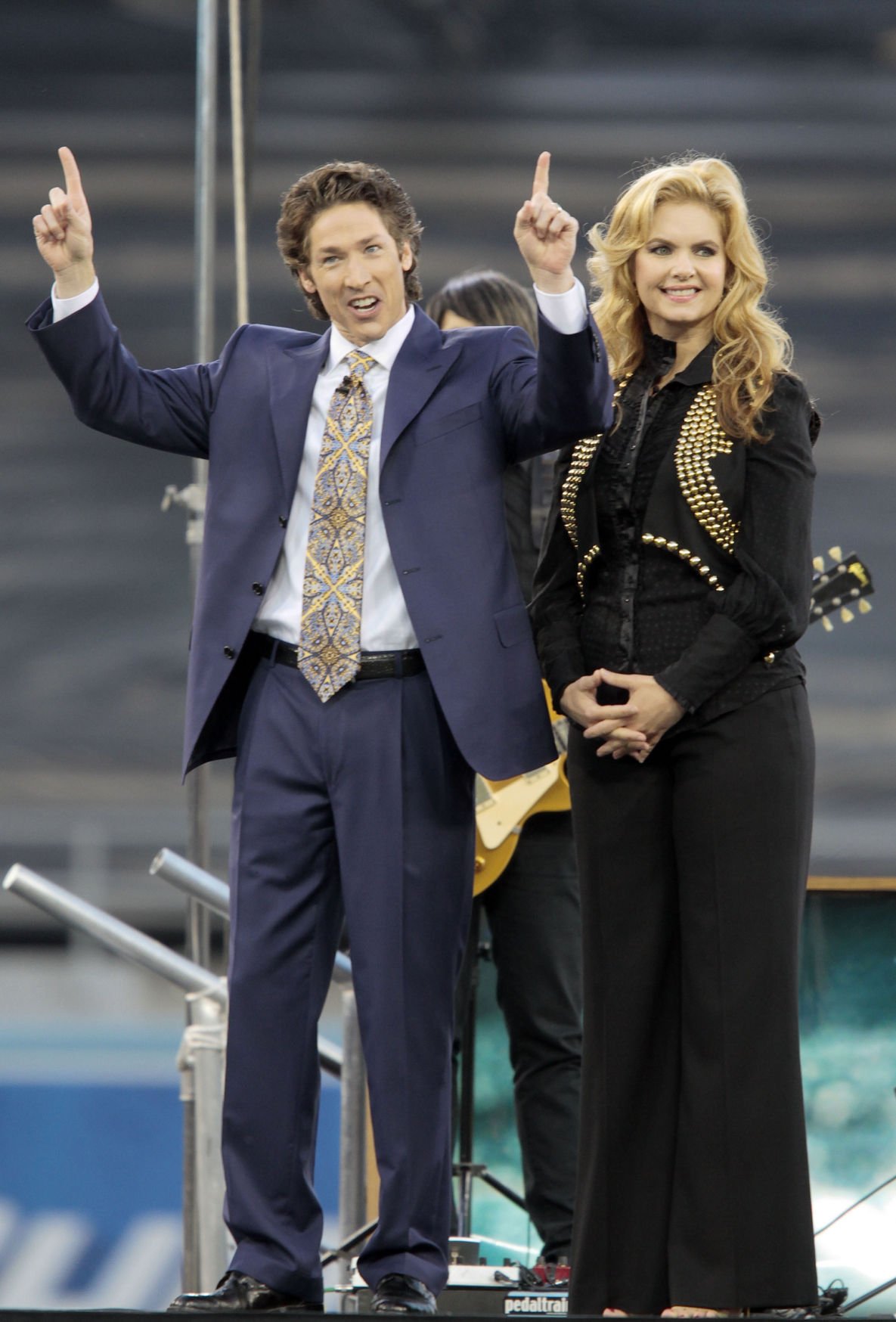 Celebrity pastor Joel Osteen and his wife, Victoria (right) will bring "A Night of Hope" to Lincoln’s Pinnacle Bank Arena on May 29.

Twelve years ago a young new minister and his wife decided to take their message of hope to the masses -- sharing stories of inspiration and faith in venues created for baseball and football games.

“We planned on doing only three,” Joel Osteen recalled in a phone interview from Houston. “We never dreamed so many would come out.”

Tens of thousands of people -- of all faiths, ages, cultures and traditions -- fill stadiums and arenas to hear Osteen, the pastor of “America’s largest church,” his wife, Victoria, and their children, Jonathan, 20, and Alexandria, 16, tell them they can overcome the difficulties in their lives and that dreams do come true when you believe and trust in God.

The Osteens host 12 "Night of Hope" events a year -- one a month. The rest of their time is spent in Houston, ministering to the 50,000 members of Lakewood Church, a congregation Osteen’s father started 56 years ago.

On May 29, the Osteens bring "A Night of Hope" to Lincoln’s Pinnacle Bank Arena. The event was rescheduled from Oct. 10. With 14,000 seats, it is one of the smaller venues for the Osteens.

“I had only ministered one time before,” Osteen remembered.

It was not a position the younger Osteen felt ready to take on. As he describes in his newest book, “You Can, You Will: 8 Undeniable Qualities of a Winner,” it was only after he listened to what God was telling him that Osteen and his congregation transformed.

Weekly church attendance grew from 5,000 to more than 50,000 people. The church relocated, transforming the Compaq Center, home of the NBA’s Houston Rockets, to a 16,000-seat sanctuary.

Back when Lakewood started, the church had 90 members -- not one of them “international.”

But as Osteen points out, his father had a vision, and he always kept it front and center.

It is this approach that Osteen not only lives by, but encourages others to take on. Don’t keep your dreams secret -- keep them in front of you. The secret to success is putting your trust and soul in God’s hands, Osteen said.

Today Lakewood Church has earned its “international” title hundreds of times over. Osteen’s weekly broadcasts are aired in 100 countries. His weekly television program, aired on cable networks, is watched by 100 million Americans a week, according to Nielsen Media.

Extremely charismatic, Osteen attracts the faithful and the faith-lost. He estimates about half of those attending "Night of Hope" events do not attend church regularly. Which is why Osteen holds these events in arenas and stadiums where people are accustomed to seeing sports and concerts.

“For a lot of people this is forgiving to them," he said. "God can be involved in their everyday life. They can honor him and reach their dreams.”

Sometimes a message from church can be very doctrine-oriented, Osteen said.

“My message is more about how do I forgive, how do I have a good attitude, how can I accomplish my goals and help other people," he said. "That is not necessarily what people are used to when they come to a church.”

The 2½-hour program of testimony, personal stories and music is designed to help people shift their vantage point, he said. Daughter Alexandria sings before the crowds, something the high school junior has been doing since she was 3 years old. Osteen’s mother, Dodie Osteen, 81, shares her story of overcoming cancer at 48.

He works to reach people where they are -- just at that moment.

“I try to deal with things that touch everyday life -- forgiveness, having a good attitude and staying positive in the sometimes negative environment that seems to affect us all,” he said.

“I believe that there are a lot of things pushing people down in life. It is important to have your faith or passion reignited. Sometimes we lose perspective or get into a routine. The 'Night' is about igniting faith and passion and realizing what you have.”

“Sometimes we look at what is wrong, instead of focusing on what is right. … Our perspective needs changing,” Osteen said.

And at the end of the night, his goal is quite simple.

“Come to be inspired and uplifted," he said. "It is not going to be uncomfortable. It will challenge you to rise higher; to let go of the old and recognize the new. I always tell people: ‘You will leave better than you were before.’

“God’s dream for your life is bigger than your own.”

“Good Christians” shouldn’t do yoga. That’s not a new stance, but when retired Catholic Bishop Fabian Bruskewitz issued a statement telling Catholics to abstain from yoga -- all hell broke loose on Facebook this past week.

Restored and renewed, 110-year-old church to be dedicated

A celebration marking the 110th birthday of the former Thayer church Zion Lutheran will be held May 24 at Wessels Living History Farm near York.

In the fall of 1924, gas was 9.9 cents a gallon, business was booming at Nebraska Typewriter so much so that people could rent the machines, a…

Celebrity pastor Joel Osteen (center) leads his congregation in prayer during his "A Night of Hope" event at Dodger Stadium in 2010.

Celebrity pastor Joel Osteen and his wife, Victoria (right) will bring "A Night of Hope" to Lincoln’s Pinnacle Bank Arena on May 29.