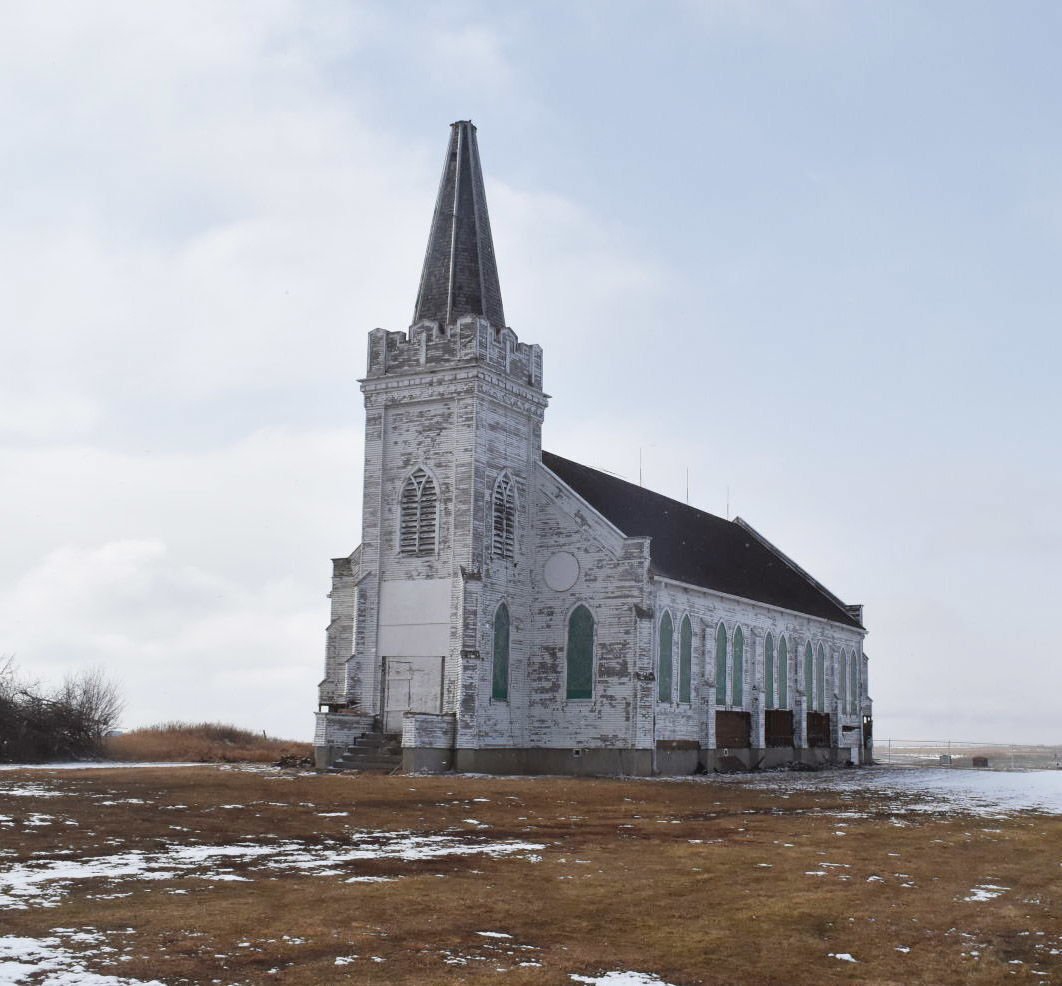 Snow comes down at the old Wilson Church near Clarkson earlier this month. The church was more than 100 years old, but time and vandals took their toll. So demolition of the church has begun. 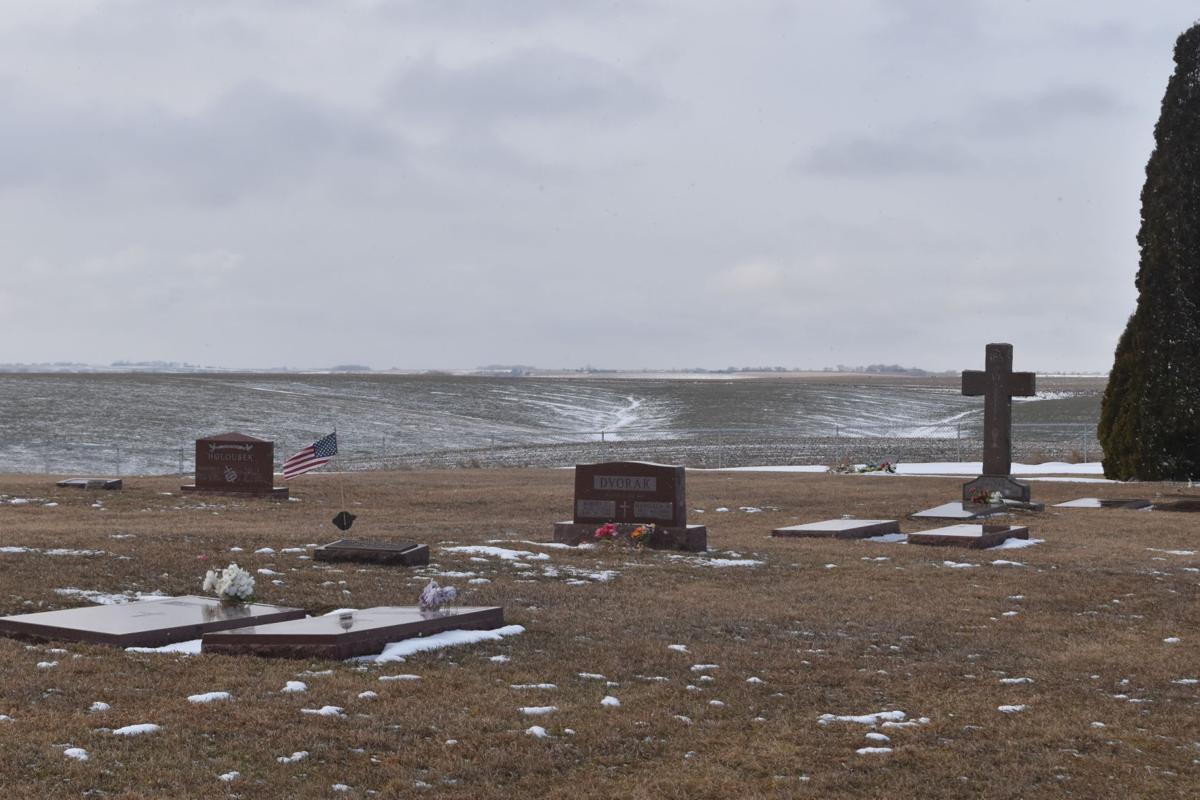 Gravestones in the Wilson Church cemetery stand against a backdrop of plains. Some area residents have relatives buried in the area. 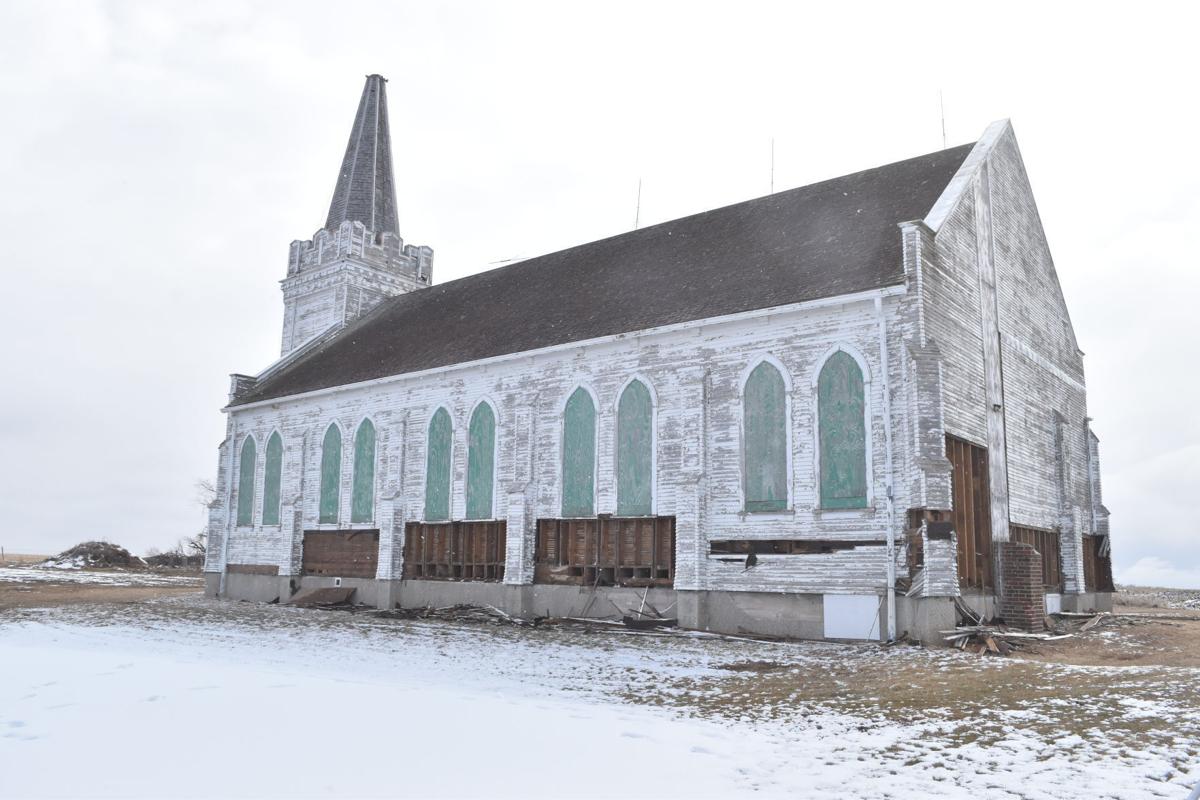 The back of the building and the sides show the deterioration.

With mixed feelings and heavy hearts, Colfax County residents said goodbye to the old Wilson Church, the landmark that Mike Dvorak said could be seen from any hill within 10 miles.

The church, located off of County Road N near Clarkson, was in disrepair and had been vandalized. The building is being demolished.

To many, the old Wilson church brings back a flood of lasting memories.

Dvorak recalled being at the church during a beastly hot summer for his sister’s wedding. One of his daughters was baptized in the church, he noted.

“I feel bad that they’re taking it down,” said Dvorak, adding that his family was among the church founders. “But I totally understand why they are. … I’m OK with it coming down.”

For Vicki Brabec, the church is also important to her family, as many relatives are buried in the cemetery.

“The cemetery was really our connection to our past,” said Brabec, who's lived in the Clarkson area for decades and lives near the church. “Not that many people are buried there anymore, but my whole family, my brothers and sisters and even our kids, we’ve all bought plots there so it’s going to be our home forever.”

Until a tornado hit the church in 1999, every Memorial Day residents would gather for Mass. After the tornado, the worship service moved to Schuyler, she said.

“The ladies would go and dust everything and bring flowers from their gardens, and we’d have this beautiful Mass. … You met the same old people every year, and everybody got older or they brought their children,” she said. “The church just sparkled for that hour.”

But time marches on, she said.

“It stood for over 100 years. It will stand for another 100 in our hearts,” Brabec said. “It’s part of the community. It won’t be the first church to come down. It won’t be the last either. But it’s just a building. It’s the spirit of the people.”

That’s the only way Brabec can settle it in her heart.

Her memories include the filming of "O Pioneers!", originally released in 1992. The movie is about a woman who struggles with the family farm she inherited. The movie was filmed in Clarkson, and the church can be seen in the movie.

“They could film the movie and it was like old times,” she said. “There wasn’t anything modern in the area to tear from the old-time theme of the movie.”

Seeing the church go is like the end of an era, Brabec added.

“We missed this Memorial Day because of the pandemic,” she said. “But, hopefully, we’ll meet again.”

Both Brabec and Dvorak said Colfax County is losing a landmark.

The old Wilson church also served as a social location.

Out of the landfill, woven into a purpose: Becky's Beds of Bags helps Lincoln's homeless population

“If a young man or young woman of the parish brought somebody, perhaps somebody special, home with them, there (were) immediately rumors they were getting married,” Dvorak said. “I know I brought my wife, Lynette, home a time or two.”

One time, the two drove home from the University of Nebraska-Lincoln in a snowstorm. The couple struggled with navigating the snowdrifts in a vehicle not equipped with four-wheel drive. Dvorak loaded up some weight in the back of the car and installed snow tires, worried about being late.

Carolyn Komatsoulis is a reporter for the Schuyler Sun. Reach her via email at carolyn.komatsoulis@lee.net.

With more shots going into more arms, people are beginning to return to church, too, trading their screens for a seat in a pew just in time for the holiest day in Christianity.

Hear speakers at the Mayor's Interfaith Prayer Breakfast on Wednesday speak about "The Role of Spirituality and Inner Contemplation in the Path toward Racial Justice."

The state's three bishops announced Wednesday they're planning to end the dispensation from the Sunday Mass obligation on May 23.

First Lutheran reaches across the miles to Kenyan

B & the Boppers to be livestreamed from Vine Church

The 37th annual Mayor’s Interfaith Prayer Breakfast will be livestreamed Wednesday, April 7, from 7:30-8:45 a.m. with the theme of “Faith, Spi…

Snow comes down at the old Wilson Church near Clarkson earlier this month. The church was more than 100 years old, but time and vandals took their toll. So demolition of the church has begun.

Gravestones in the Wilson Church cemetery stand against a backdrop of plains. Some area residents have relatives buried in the area.

The back of the building and the sides show the deterioration.