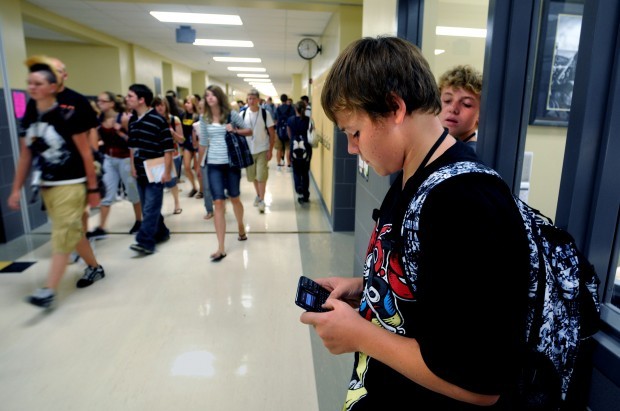 Lincoln Southeast freshman Jerry Griffis texts outside the school office before heading to the cafeteria. Southeast students can use cell phones in the halls and lunchroom, but not during classes. (Robert Becker/Lincoln Journal Star) 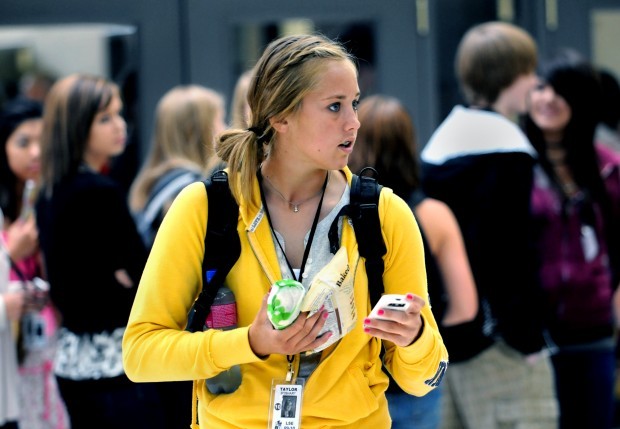 Taylor Boshart, a Lincoln Southeast sophomore, holds her lunch and her cell phone as she waits to meet a friend in the cafeteria. (Robert Becker/Lincoln Journal Star)

A few years ago, Lincoln's public high schools gave up the battle against cell phones in school.

Now, students -- with heads bowed and thumbs hopping -- text madly as they shuffle between classes and relax at the lunch table.

But when they're in class, phones better be out of sight and off (or at least on vibrate).

"We used to say we banned them and students couldn't have them. But the reality is, everybody has them," said Pat Hunter-Pirtle, principal of Lincoln Southeast High school.

In fact, 71 percent of American students ages 12-17 own a cell phone, according to a Pew Research survey released Aug. 19. The survey, taken in early 2008 as part of its ongoing Teens and Parents project, will be updated early next year.

Everyone expects that number to leap significantly. Many Lincoln school principals said 71 percent seems low, especially if you consider that the same Pew survey of adults found that 85 percent own cell phones. The rate is even higher among parents.

Increasingly, the cell phone is seen as a critical tool for our daily lives, said Aaron Zabawa, associate principal at Culler Middle School. The parent of a kindergartner, Zabawa predicts it won't be too long before his son is carrying one to school.

Parents and kids rely on it for communication. Some use it as their clock, camera, planner, entertainment system, news source and encyclopedia. The phone is only a tiny component of this high-tech palm-sized computer.

Which is why schools will eventually be forced to rethink cell-phone rules.

"Definitely that day is coming," Zabawa said, noting that students at Harvard University use cell phones and other wireless technology to respond to and discuss questions in classes ranging from physics to economics to art and drama.

Nationally, most schools ban or limit cell phone use among students.

However, despite school policies, the reality is that more than two-thirds of teens admit using their cell phones in school when they shouldn't.

Since allowing Lincoln public high school students to use their phones outside of class and at lunch, violations and phone confiscations have decreased significantly, Hunter-Pirtle said.

But they still happen. Lincoln North Star Principal Nancy Becker estimated she had 10 confiscated cell phones at the end of last school year because students - and more often their parents - failed to come in and pick them up.

Most Lincoln Public Schools consider cell phones a "nuisance item," classifying them among other longstanding contraband like toys, comics, candy and gum. If discovered, they will be taken away and returned to either the parent or student at the end of the day.

At Beattie Elementary School, cell phone-carrying students turn them off and turn them over to the teacher for safe-keeping during the school day. They pick them up before heading home.

Many families rely on cell phones. They use them to check in with their kids, leave a text message reminder about an after-school doctor's appointment or handle emergencies.

Although most parents only intend to leave a message when they call during the school day, many kids forget to turn their phones off or can't resist the urge to check who's calling when the phone starts vibrating in their pocket.

Bill Bucher, principal at Lux Middle School, where cell phones are required to be turned off from 8 a.m. to 3 p.m., said many times when kids get caught using the phone, it is actually mom and dad calling or texting.

"I don't think they are unnecessary messages," Bucher said. "But I don't think parents realize the disruption when it goes off in a math test."

Or the magnitude of the issue when multiplied 25-fold by the number of students in the class.

At Pound Middle School, the cell phone rule is simple.

"We never allow a student to have a phone turned on or used in the building - ever," said principal Chris Deibler. "They can bring them to school, turn them off and put them in the locker during the day. They can use them before school in the morning on the porch and after school when they need to contact rides."

Deibler is adamant: Cell phones take away from the learning environment - especially among younger kids.

"They go from tool to a toy. When they are used as tools, fine. When they are toys, they are not. Parents say they are using it as a tool. Unfortunately there are too many kids who cannot control the use of it to where it becomes a toy to them. They are too obsessed with it and it detracts from the learning environment. We are not going to have it become a part of our culture here."

But Zabawa takes a different view of cell-phone use among students. Sure there are integrity questions, he said, but for the most part, the cell phone is a modern-day twist on age-old student behavior.

"Back in the day we passed notes," Zabawa said. "Today kids text - and have become quite proficient. Some can actually text while the phone is in their pocket."

No one disagrees that cell phone-related issues of cheating, bullying and inappropriate photography or video recording can be a concern.

Bucher says one of his "biggest worries is that someone will take a picture of somebody in the middle of getting dressed in the locker room and pass it on to 100 of their buddies."

Many principals say they have had to deal with fallout over cell phone misuse.

And when they do, it can get pretty intense, he said.

But many agree: Rules should focus on common sense, etiquette and acceptable behavior, rather than the infinite what-ifs.

Which is why Pius X High School Principal Tom Korta tells his students that cell phones should not be seen or heard during the school day - first bell to last bell. If they are, they will be confiscated.

"Basically I want kids to know there is a time and a place for it," Korta said. "To me it is social etiquette. You should not be texting when someone is talking to you or working with you."

And as a parent, Korta understands why kids and parents want that ability to get quick messages to one another.

"I cannot argue with that. It's a different time," he said, adding that he always carries his cell phone, and usually it's on - on vibrate.

"Somehow we have to come to grips on the issue and meet in the middle and teach responsible use of the cell phone," Korta said. "But right now, the easiest thing is to just ban them."

Reach Erin Andersen at 473-7217 or eandersen@journalstar.com.

Tech etiquette: A guide to cell phone civility in the 21st Century

To see a larger, zoomable version of this, click here.

Watch Now: 15 cities that spend the most on utilities

Watch Now: 15 cities that spend the most on utilities

Lincoln Southeast freshman Jerry Griffis texts outside the school office before heading to the cafeteria. Southeast students can use cell phones in the halls and lunchroom, but not during classes. (Robert Becker/Lincoln Journal Star)

Taylor Boshart, a Lincoln Southeast sophomore, holds her lunch and her cell phone as she waits to meet a friend in the cafeteria. (Robert Becker/Lincoln Journal Star)
© Copyright 2020 The Lincoln Journal Star, 926 P Street Lincoln, NE | Terms of Use | Privacy Policy
Powered by BLOX Content Management System from TownNews.com.
You don't have any notifications.