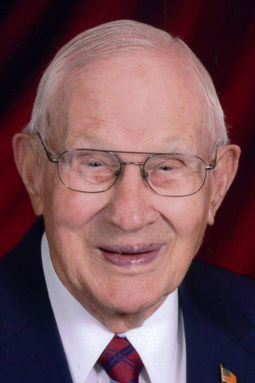 Elroy M. Hefner, age 96 of Coleridge, Nebraska died on Sunday, July 26, 2020 at his residence. Elroy Morris was born on December 12, 1923 in Coleridge, Nebraska to George Paul and Alvina Marie (Bartling) Hefner. He grew up in Coleridge and was a graduate of Coleridge High School in 1941. Elroy entered the U.S. Navy in 1944 and served until 1946 during WWII. He was in the Amphibious Forces serving 19 months in the South Pacific. He started Hefner Oil and Feed Store in 1947 with his brother Gerhart. Elroy was a partner in Hefner Oil today.

He married Carol Rae Willms on June 12, 1949 in Coleridge. Elroy was elected in 1976 to the Nebraska Legislature as senator for District 19. He held this position for 16 years until 1/3/1993. Elroy was President of Crystal Oil and Diamond Horseshoe in South Sioux City, NE and Truck Haven in Sioux City, IA. Later he was the former President of the Omaha Truck Plaza. He was a past President of Nebraska Petroleum Marketers association.

Funeral services will be on Thursday, July 30, 2020 at 2:00 p.m. at Immanuel Lutheran Church in Coleridge. Burial at Lawn Ridge Cemetery in Coleridge with military honors by the Coleridge American Legion Post #114 and the Legion Riders. Visitation on Wednesday, at church, from 6-8:00 p.m. Visitation continues on Thursday one hour prior to services at church. Arrangements are under the direction of the Wintz Funeral Home in Coleridge. Social distancing and face masks are required for visitation and funeral. You may watch a livestream of the funeral at https://www.facebook.com/ImmanuelLutheranColeridge.

To send flowers to the family of Elroy Hefner, please visit Tribute Store.