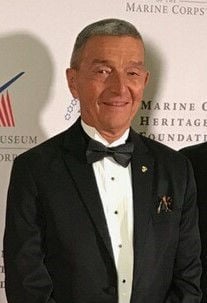 David Robert Parker, 80, of Boulder, Colorado, died on January 16, 2020, after bravely fighting a year-long battle against brain cancer. Dave was born November 15, 1939, in Sioux Falls, South Dakota to Gerald and Lucile (Gleich) Parker. Dave grew up in Superior, Nebraska, graduating from Superior High School in 1957. After high school, Dave attended and graduated from the University of Colorado-Boulder in 1962 with a BA in English. He attended CU on an ROTC scholarship and actively served in the Marines 1962-1967, earning the rank of Captain. Upon returning to civilian life, he attended the University of Nebraska College of Law, during which time he served as Editor in Chief of the Nebraska Law Review.

After graduating from the University of Nebraska College of Law in 1970, he became a partner in the Nelson and Harding Law Firm in Lincoln and later established and worked in the Denver office. Following his nine-year tenure with the firm, Dave returned to Lincoln where he served as Vice President & General Counsel of Crete Carrier Corporation and affiliated companies from 1979 thru 1985. Dave then returned to private practice as a partner in the Lincoln law firm of Rembolt, Ludtke, Parker, and Berger until 1996.

While working in private practice, he became actively involved in the ownership and management of a trucking company, and served as Chairman of JTI, Inc. and affiliated companies from 1985 thru 1997 and served as Vice President of Active Transportation Co. and affiliated companies, 1995-1996. With the change in ownership of JTI, Inc. Dave became the Executive Vice President-Administration of U.S. Xpress Enterprises, Inc. in 1997 and continued in that role through the end of 2004. From 2005 thru 2019, he served as Senior Legal Counsel for Great West Casualty Company and Great West Risk Management, both trucking insurance companies.

Dave was very active in professional and civic organizations during his life. Most recently he chaired committees within the Federal Motor Carrier Safety Administration, and he was an active member and held leadership positions within a number of trucking associations including, American Trucking Associations, Truckload Carriers Association, Nebraska Trucking Association, Transportation Lawyers Association, and Canadian Transport Lawyers' Association. Dave was a proud member of the Founders of the Marine Corps Heritage Foundation and served as Vice Chairman of the Marine Corps Heritage Foundation Board of Directors.

Dave was also an active member of the Colorado and Nebraska Bar Associations, and was an active member and leader within a number of Lincoln organizations including the Food Bank of Lincoln, Inc., the Lincoln Foundation, Inc., Lincoln United Way; Lincoln Chamber of Commerce, Leadership Lincoln Alumni Association, and Nebraska Wesleyan University, and he served as a Delegate of the Japan-American Conferences of Mayors and Chamber of Commerce Presidents. Most important to Dave, was his family.

He is survived by his wife of 57 years, Nancy (Geddes) Parker, their daughter Julie (Michael) Karavas and son Eric (Mary) Parker, and their grandchildren Adam and Alex Karavas, and Macie Parker. Dave is also survived by his sister Joanne (Robert) Howard, brother Dr. Richard Parker, brother in law Bill (Susan) Geddes, sister in law Ann (Chuck) Lennon, and many nieces and nephews. In addition, numerous friends Dave considered family. Dave's family is most appreciative of the care provided by the staff at Sunrise at Flatirons, Broomfield, CO and Tru Care Hospice.

The family will celebrate Dave's life privately. Memorials may be made to the Marine Corps Heritage Foundation (www.marineheritage.org) .

To plant a tree in memory of David Parker as a living tribute, please visit Tribute Store.

Sign up to get the most recent local obituaries delievered to your inbox.