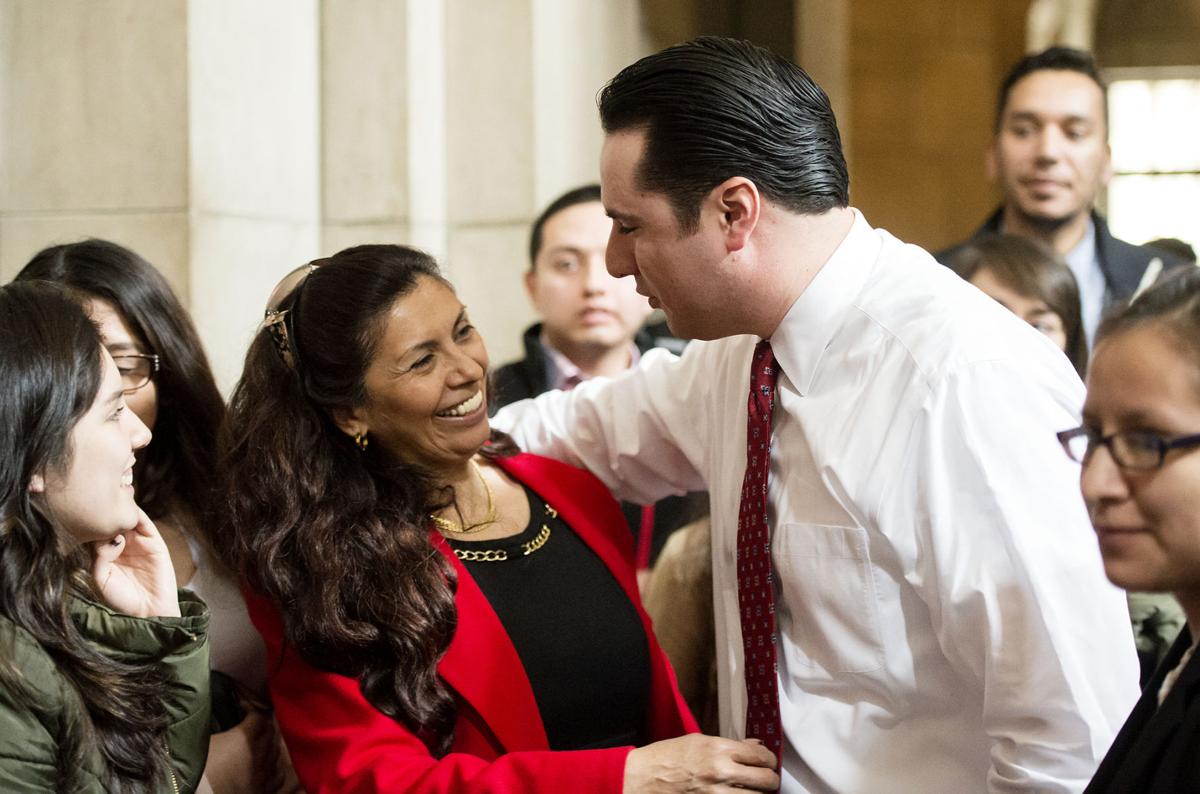 State Sen. Heath Mello (right) gets a hug from Catalina H. Blomker, who supported his bill to allow young immigrants to acquire professional and commercial licenses to work in the state. Mello was congratulated in the Rotunda after a successful override of Gov. Pete Ricketts' veto of the bill on Wednesday. 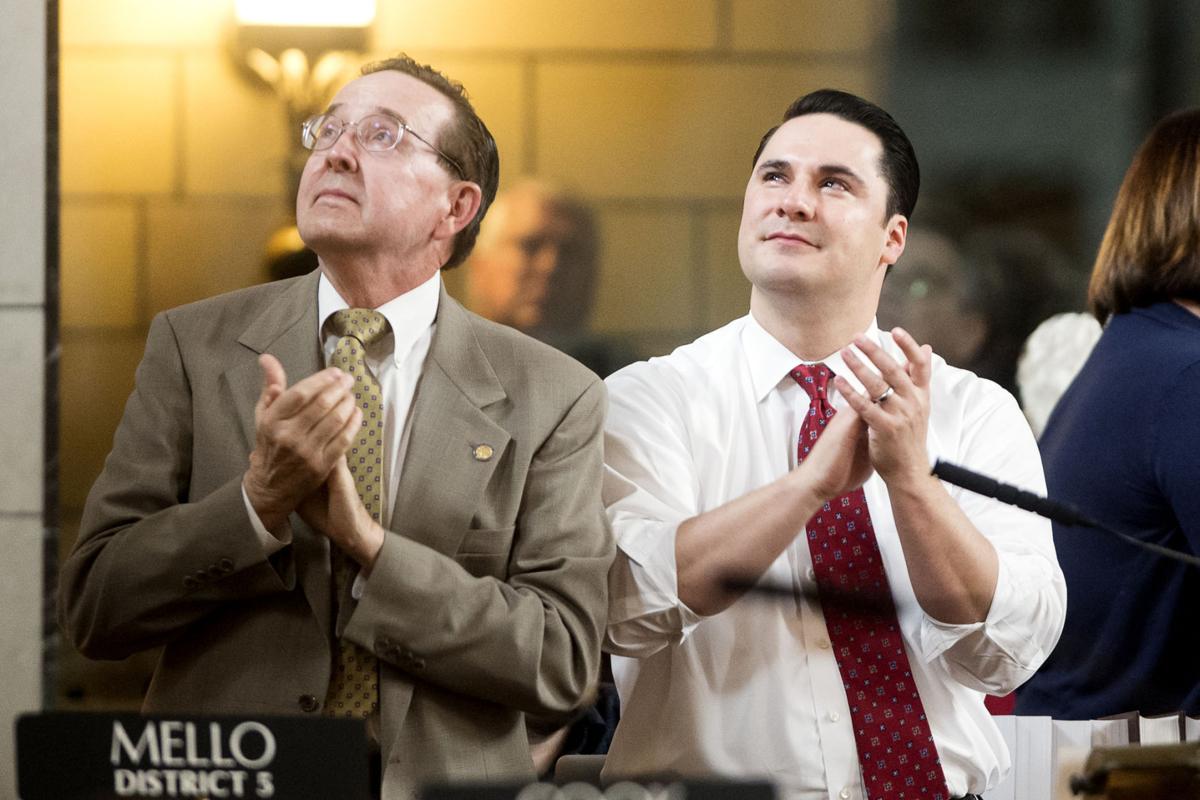 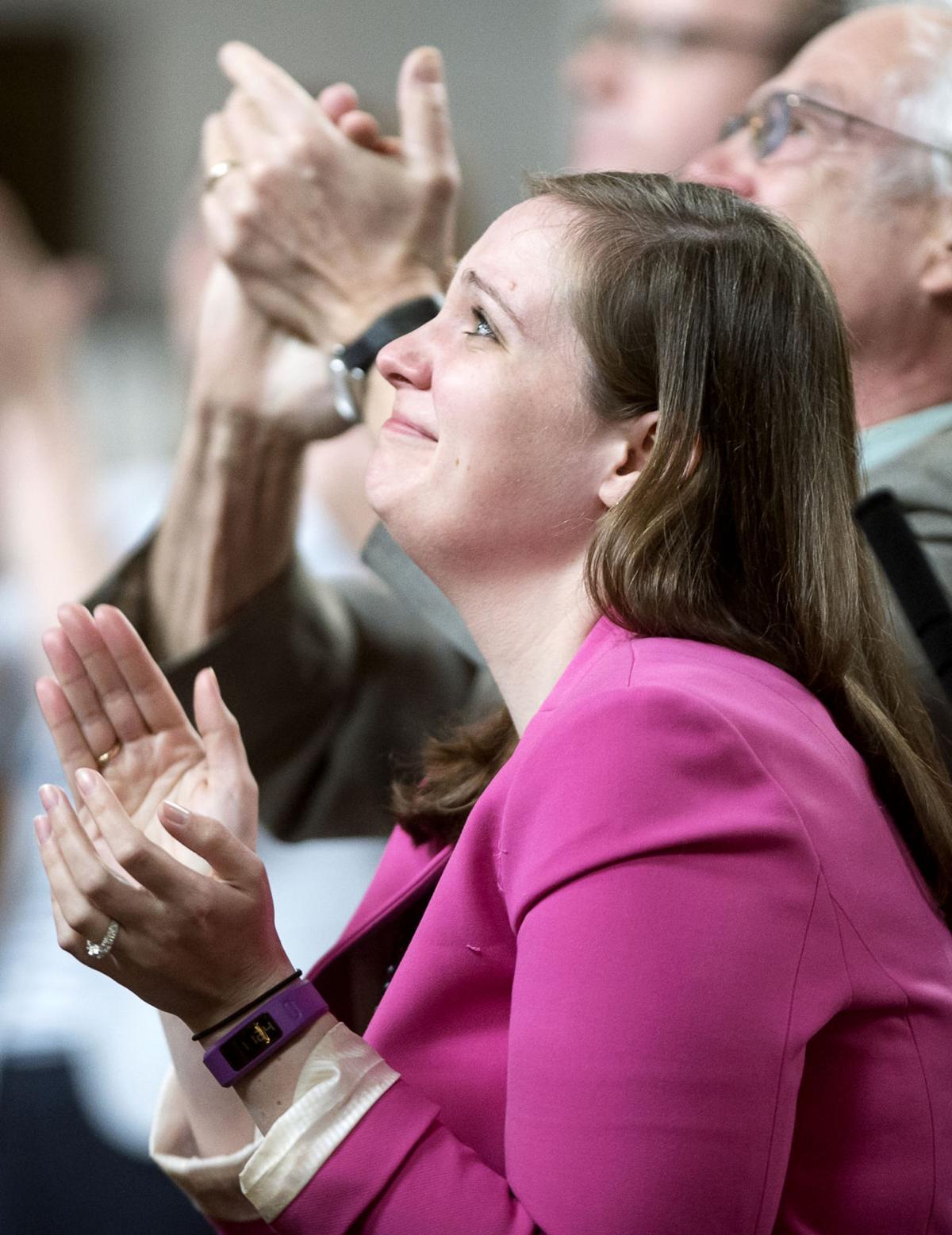 More than 100 young immigrants in the balcony exchanged standing applause with state senators Wednesday after the Legislature overrode Gov. Pete Ricketts' veto of a bill clearing a pathway for them to acquire professional and commercial licenses to work in Nebraska.

Following a tense two-hour debate, senators voted 31-13 to override the veto of LB947. That was one more than the 30 required to enact legislation over the governor's objections.

The bill will allow so-called DACA youth who have been granted lawful presence in the United States by the Deferred Action for Childhood Arrivals executive action taken by President Barack Obama to acquire licenses to work in the state.

Most of those young immigrants were brought to the United States by their parents illegally when they were young children and most of those affected by the bill grew up in Nebraska and went to school here.

When the result was officially announced, young people who filled one of the legislative balconies stood and burst out in applause and then most of the senators who had supported the veto override stood, looked up and returned the applause.

The result rejected the governor's only contested veto this session and handed term-limited Sen. Heath Mello of Omaha a victory on the final day of his last legislative session.

Mello told his colleagues he was "utterly disappointed with the governor" for his use of "misinformation, demagoguery and political rhetoric" to attack the bill, including a suggestion that granting work licenses to lawful residents somehow represented "amnesty."

"It's sad to see what he has chosen to do," Mello said. "We're talking about people (who are part of) the future of our state."

The Lincoln, Omaha and Nebraska chambers of commerce, as well as the Nebraska Cattlemen, endorsed the legislation as a workforce development tool that would benefit the state.

Later, at a news conference, Ricketts said: "I have no doubt that my veto was in line with what the people of Nebraska believe (and) we laid out the case the best we could."

Asked about Mello's remarks, Ricketts said, "I really don't even know what rhetoric he is referring to."

Following the vote, Alejandra Ayotitla, a 20-year-old student at the University of Nebraska-Lincoln who watched with excitement from the balcony as the roll call count moved toward the 30-vote threshold, said: "The state does want us here."

"With every vote that said yes, I think the excitement grew," she said. "When we finally saw the 30 votes, we wanted to cheer, but you can't when you're in there."

Ayotitla was 9 when she came to America with her mom and sister; she has lived in Lincoln ever since.

With her family and friends here, she said, "it wouldn't make sense for me to go anywhere else."

Ayotitla, who was joined in the balcony by her father, her sister and a friend, plans to attend graduate school to become a psychologist.

Opponents of the bill argued that it runs counter to "the rule of law" since the young people affected by the measure entered the country illegally.

Sen. Bill Kintner of Papillion said Mello was engaging in "political theater" with his criticism of the governor.

Shortly before the debate began, Kintner tweeted: "The Capitol is swarming with illegal aliens in anticipation of the Legislature overriding the governor's veto of LB947."

Several senators said immigration is an issue that the federal government, not the states, needs to resolve.

"It is beyond belief that we would not support these young people," Sen. Kathy Campbell of Lincoln said. As the state attempts to build its workforce, she suggested, "we have the people here right now."

Sen. Bob Krist of Omaha said: "I consider those folks to be my extended family."

But then, Krist noted, "I have never been Republican-enough or conservative-enough" as an independent-minded legislator.

"These kids have worked their butts off," Sen. Tommy Garrett of Bellevue said.

Do opponents of the bill want to "create a serfdom to hold these people down?" he asked, allowing them to work in menial jobs but not qualify to work in Nebraska in the professional sector.

Sen. Les Seiler of Hastings questioned whether the Bob Kerrey pedestrian bridge across the Missouri River was built "so good kids in Nebraska can walk across the bridge to work in Iowa (and) Council Bluffs can be the beneficiary of our stupidity."

"Do what is just, decent, humane," Sen. Ernie Chambers of Omaha, a registered independent, urged his colleagues.

Two senators who had voted to approve the bill when it was enacted by a 33-11 vote last week -- Sen. Curt Friesen of Henderson and Sen. Dan Hughes of Venango -- abandoned the measure and did not vote on the motion to override.

Three senators -- Sens. Joni Craighead of Omaha, David Schnoor of Scribner and Dan Watermeier of Syracuse -- switched from not voting to no.

And Sen. Tyson Larson of O'Neill changed his earlier no vote to not voting.

The Legislature voted 31-13 to override a veto of a bill (LB947) which allows young, undocumented immigrants to acquire professional and occupational licenses to work in Nebraska.

Sen. John Murante of Gretna has decided not to attempt to override Gov. Pete Ricketts' veto of a redistricting reform bill that was negotiated…

Each of 11 senators departing the Legislature this year got a few minutes at the goodbye podium Wednesday before the body adjourned sine die.

Gov. Pete Ricketts on Friday set the stage for a veto showdown with the Legislature on its final day in session next week.

The Legislature on Wednesday gave overwhelming 33-11 approval to a bill that would allow young, undocumented immigrants to acquire professiona…

On the eve of a final vote in the Legislature, Gov. Pete Ricketts urged state senators to kill a bill that would allow so-called young DACA im…

Woman gets probation for allowing illegal immigrant to work

Gov. Pete Ricketts said Thursday he achieved his legislative priorities this year and believes he's on course to provide Nebraskans with reduc…

What's next for Heath Mello?

Heath Mello was elected to the Legislature when he was 28.

University of Nebraska President Hank Bounds joined more than 450 college and university presidents across the U.S. in signing a statement of …

A coalition of more than 60 business, civic and community leaders on Tuesday urged members of Nebraska's congressional delegation to guard you…

State Sen. Heath Mello (right) gets a hug from Catalina H. Blomker, who supported his bill to allow young immigrants to acquire professional and commercial licenses to work in the state. Mello was congratulated in the Rotunda after a successful override of Gov. Pete Ricketts' veto of the bill on Wednesday.