Senators back again, but nothing's quite the same
View Comments
Share this
{{featured_button_text}}
1 of 3 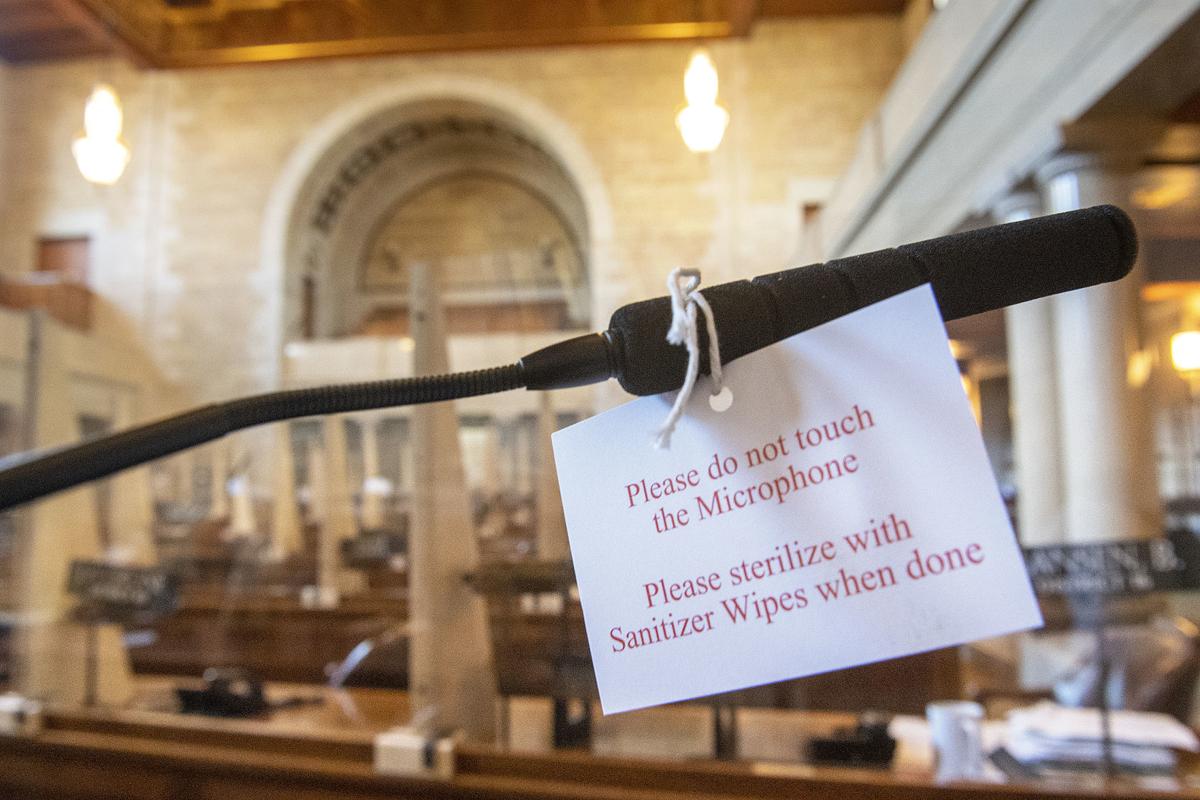 When the legislative session resumes Monday, notes will remind state senators to disinfect the microphones. 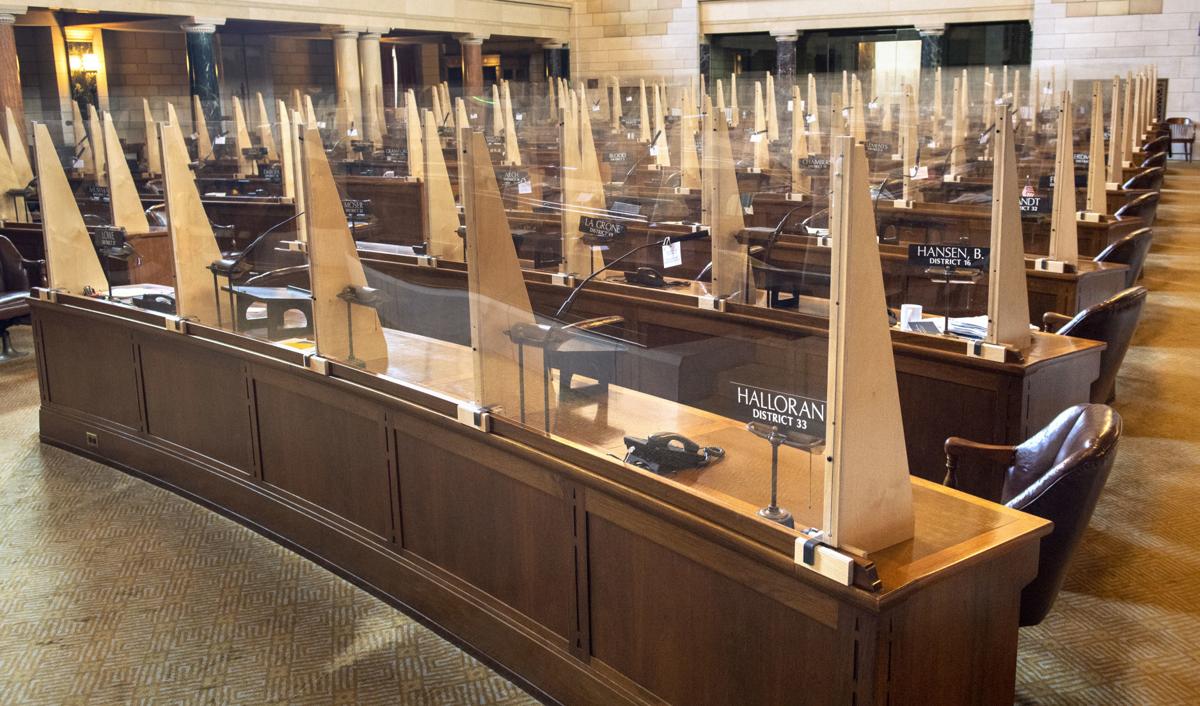 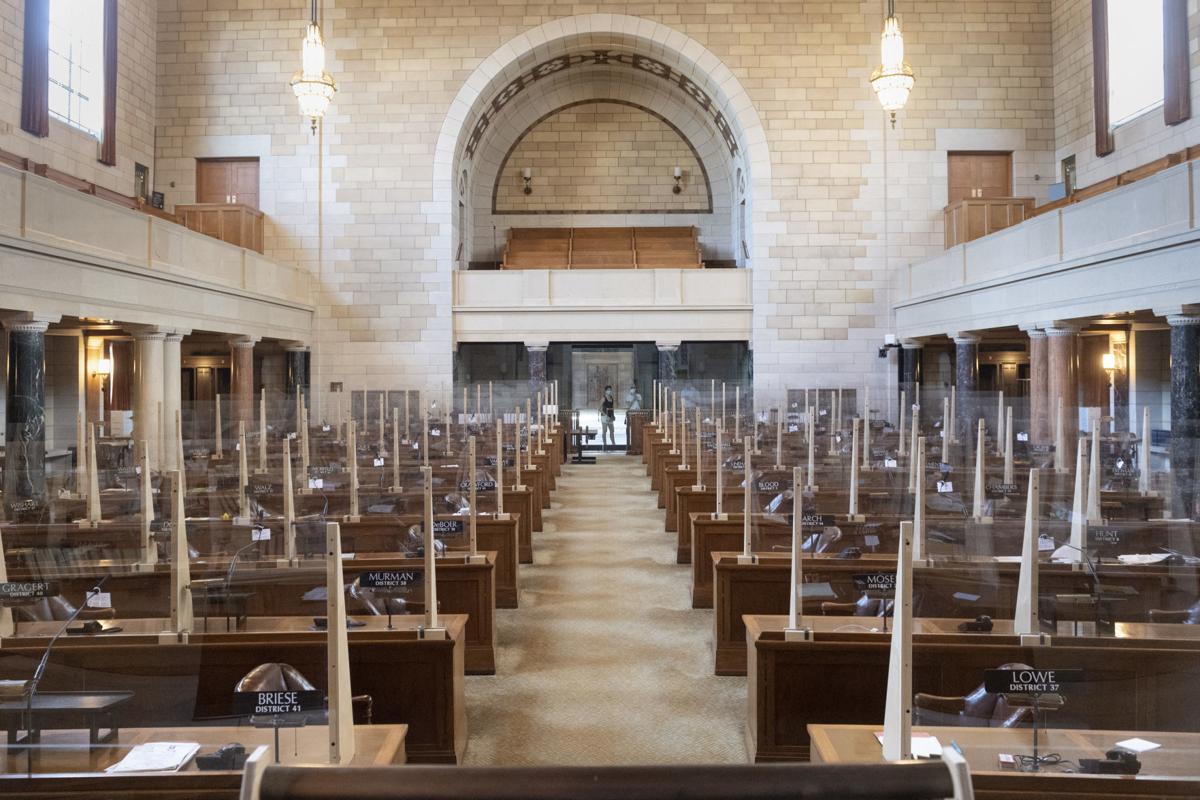 The last days of the 2020 Nebraska legislative session, which will reconvene Monday, will look different, with Plexiglas barriers, masks for those who choose to wear them and physical distancing.

Senators will be advised to wear masks in the chamber, rotunda, offices and hallways, and be tested for the coronavirus this week. But Speaker Jim Scheer acknowledged it's up to individual members whether they will follow the recommendations.

Long days, many priority bills and intense issues await senators, along with the threat of rising COVID-19 cases in the state.

In addition to the 49 senators, others allowed into the chamber will be limited, but could at any given time total about 75 to 80 people, including Clerk of the Legislature staff, pages, troopers, sergeants at arms, legislative and committee staff and others.

Lobbyists will not be allowed to send in messages or gather at the lobby doors. Media will be confined to an upper balcony, and no one from the public can watch in person.

Still, it's not without risk.

It was reported Saturday that at least 26 members of Mississippi's legislature, including the House speaker, had tested positive for the coronavirus after weeks of working at the state Capitol — often absent face masks and social distancing. The state's lieutenant governor also came down with the virus, along with 10 others who work in the building.

One of Nebraska's state senators who will be there, Mike Moser, 68, of Columbus, contracted the virus while the Legislature was on a break and was hospitalized five weeks, getting out June 13. He said in an interview with the Columbus Telegram he is still working to get his strength, balance and agility back from the "miserable virus."

At least two senators have said they do not intend to wear masks.

"Come July 20th, I believe I have no other option but to attend the restart of the session, not only be there but to be on the floor, unmasked and healthy, for debate," said Sen. Steve Erdman of Bayard on his legislative blog.

The 10 counties that make up Erdman's district have collectively recorded just more than 100 cases of COVID-19 — about a third of those in the past two weeks.

On his drive to Lincoln next week, he said, he will worry more about the car coming at him than the virus.

Erdman and Sen. Steve Halloran of Hastings have urged an end to restrictions in the state and said "herd immunity" to the new virus can be achieved by allowing healthy Americans who are less vulnerable to "interact with the disease" while protecting vulnerable Americans who might not be able to survive exposure.

But doctors now are warning herd immunity may be wishful thinking; some patients have caught the virus twice. And researchers are warning of long-term effects and complications from the virus on multiple organs, even on younger patients or those with milder initial symptoms. And studies are showing immunity may be short-lived.

Omaha Sen. Tony Vargas has a seriously different view from Erdman and Halloran. His father, who lived in New York, died from the virus in April. And he is watching the rising number of cases in the state.

As of Tuesday night, Nebraska had recorded 21,717 cases and 286 deaths. Douglas County has had nearly 8,300 cases, and case numbers have surged past 2,200 in Lancaster County, where officials heightened the risk of spread of COVID-19 to the high category last week.

Vargas has concerns about the Legislature reconvening, but is hopeful all senators will take it seriously and make an effort to take care of each other.

"I'll be wearing a mask the entire time, and my staff will, too," he said.

The senators will be spending long days together, with 10 of the 17 days remaining in the session reserved for late nights, Scheer announced Monday. That means meeting up until 10 p.m. on Tuesdays, Wednesdays and Thursdays for the first two weeks and then four days in August.

Priority bills will be the focus of the session, Scheer said, and his goal is to get all those that are out of committee debate time. About 15 bills were still in committee.

"It'll be interesting to see how the intervening four months, in the relationships and conversations between senators, may or may not impact movement of particular bills," Executive Board Chairman Mike Hilgers said during a recent Platte Institute webinar.

New state prison could cost up to $750M over 30 years, companies say

A major focus of the session has been property tax cuts and business tax incentives that are set to expire at the end of the year. Scheer said last week he didn't think there is consensus on the issues.

"There's a lot of different viewpoints. Any proposal that has been brought forth has pluses and minuses, regardless if it happens to be (the) property tax portion or an incentive package portion," Scheer said.

He'd like to see something move forward, he said, but he doesn't believe there are the 33 votes needed for either proposal.

The Nebraska Economic Forecasting Advisory Board will meet during the first week of the session and give senators an idea of tax revenue collections the state will have to balance its budget. That revenue could be down substantially because of the coronavirus impact.

"We'll have to take a strong look at those bills that still have financial impact on the general fund because ... I don't see that it makes sense to spend money that we don't have," Scheer said.

Hilgers said senators he's talked to understand the fiscal impacts and are taking action to address the spending for their priority bills.

Vargas chairs the Legislature's long-term planning committee, and its members have been looking at economic trends and how the state can bounce back from the pandemic.

Voices for Children in Nebraska is expected to bring information soon on the crisis and its effects on the state's families and children, and education and housing.

Vargas, a member of the Appropriations Committee, said senators worked hard on balancing the budget before it was brought out to the floor for debate. Adjustments to the two-year budget have advanced through the first of three rounds of debate.

"I still think it's a really good budget, and my hope is that we review this through a lens of what our state needs," he said.

Those needs include a better public health infrastructure, qualified federal health centers that are able to meet the needs of Nebraskans, and investments in long-term care facilities, older citizens and those who are developmentally disabled.

"We do need to look to the future and figure out a way we can bounce back as an economy," Vargas said.

Some senators may also want to address issues during the session wrap-up that have resulted from protests after the death of George Floyd in Minneapolis and others across the country who were killed by police officers.

Any amendments on topics that have not been addressed in hearings either could not be added or would have to first have a hearing, Scheer said. Hearings could be accommodated if needed.

And then there's the Ernie factor, which may be even more intense given the events that have taken place over the four months since the Legislature suspended its session.

And even though he has only 17 days of his last session of his last term, he says "time is totally on my side.

"I could do this, as we used to say in basic training, 'standing on my head and stacking BBs in a corner.'"

This also will be the last session for Sens. Scheer, Kate Bolz, Sue Crawford, Sara Howard and Rick Kolowski.

Among major priority bills from senators and committees are:

* Change the Student Discipline Act to provide for use of necessary physical contact or physical restraint (LB147).

* Prohibit discrimination based upon sexual orientation and gender identity (LB627).

* Expanding the definition of race in employment discrimination to include hair texture and hairstyles (LB1060).

* Constitutional amendment to prohibit all forms of taxation other than a consumption tax (LR300CA).

Appropriations Chairman John Stinner said that while he doesn't see big cuts in state agencies because of the economic effects of the pandemic, he also doesn't see much money being available for bills.

Several state senators and child advocates said Thursday they are disappointed with a plan revealed Wednesday to move youths in the state's care.

Student discipline bill gets debate but no vote

The bill (LB147), introduced by Sen. Mike Groene of North Platte, is the answer for teachers, parents and students to protect them from physical injury, he said.

When the legislative session resumes Monday, notes will remind state senators to disinfect the microphones.