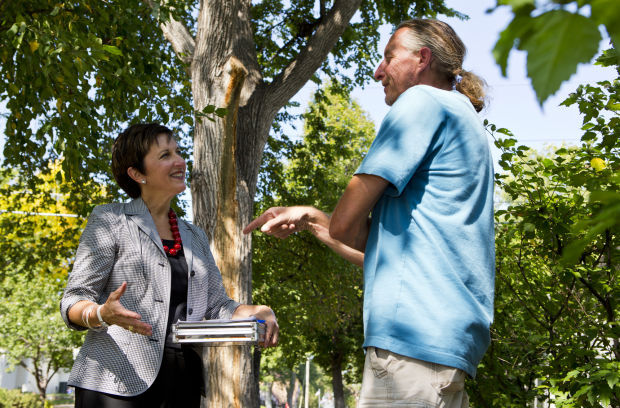 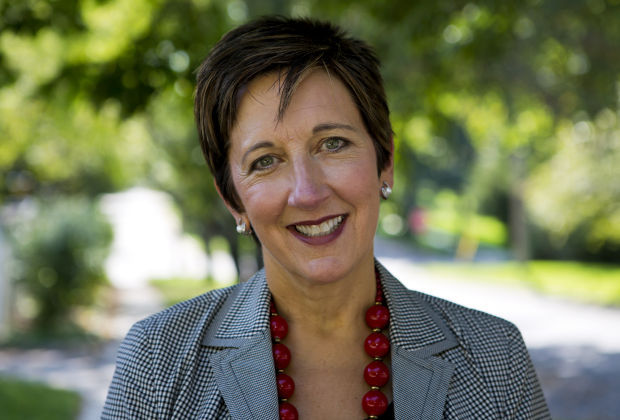 Patty Pansing Brooks is running against Dallas Jones for the District 28 state senator position in the Nov. 4 election. 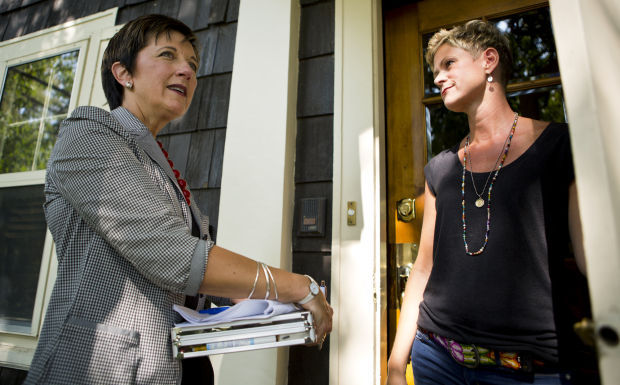 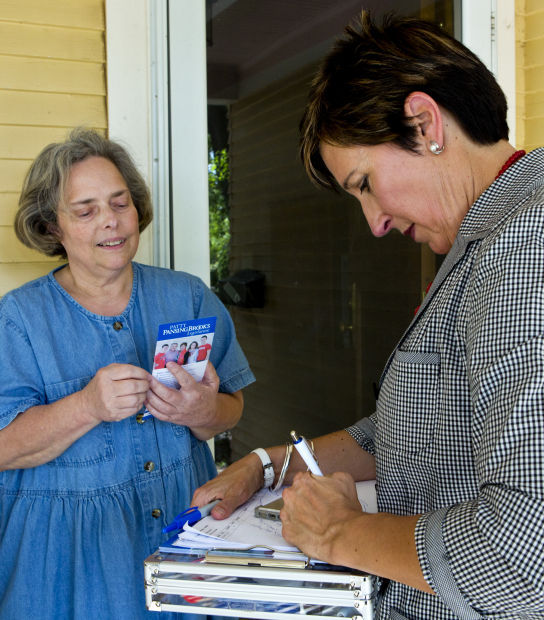 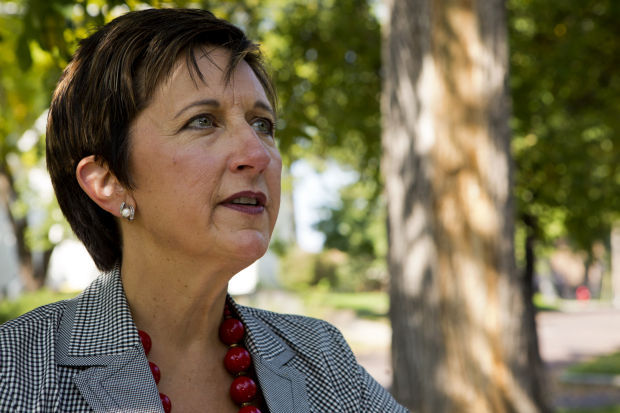 District 28 legislative candidate Patty Pansing Brooks listens as Tony Munsterman tells her which issues are most important to him, while campaigning near Lake Street on Friday. 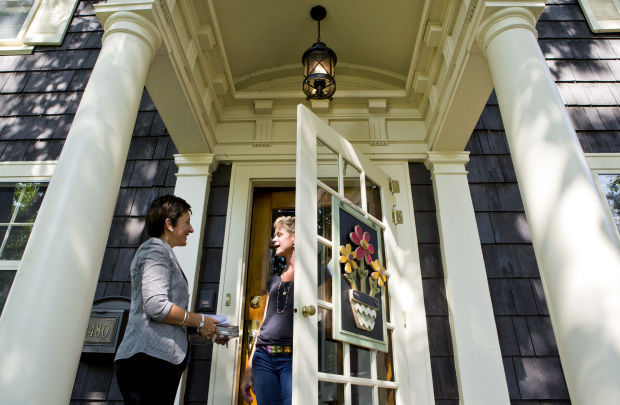 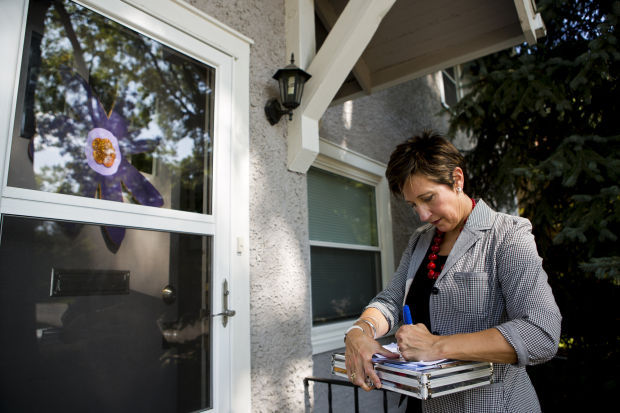 You can find traces of Patty Pansing Brooks' campaign for state senator in multiple rooms of her house: her home office, her kitchen, the dining area, the garage.

Her research on issues is exhaustive, and filed for easy referral. Among that research you'll find hundreds of newspaper clippings on minimum wage, hunger, driver's licenses for undocumented students, wind farms, poverty, solitary confinement. The subject list is long.

"The minimum wage is something I've been supporting wholeheartedly," she said one September morning as she cited a Washington Post story on how to encourage corporations to reward workers -- not just top executives and shareholders -- for gains in productivity.

There are other files, too. She points to one with dozens of requests from political action committees, special interest groups and media, asking her to answer question after question.

"I could just literally sit and research and write, the whole (campaign), and I would never see a voter," she said.

But that is not an option. She is walking neighborhoods, speaking, attending forums and political party events, talking to voters, seeking their insight on state issues.

Her billboards around town that call her a "tireless worker"? They aren't kidding.

Pansing Brooks, who is a Democrat in the nonpartisan race for the District 28 seat in the Legislature and practices business and corporate law with her husband, Loel Brooks, is putting the same energy into her political campaign as she has put into her community and fundraising campaigns for Lincoln Public Schools bond issues, Union Plaza, Centennial Mall and other projects.

And because of all that community work, she said, she has found support from all sorts of people, Democrats and Republicans alike.

She has counted at least 800 campaign contributions under $250 each.

She had spent $75,000 on her campaign by mid-June, according to her most recent Accountability and Disclosure Commission report. She reported about $28,000 cash remaining at that time.

She said she is learning much from both her research and her door-to-door walks in the district, where her opponent is Dallas Jones, a Republican.

The fact that 36 percent of district residents live at or below a household income of $25,000 has become a focus of her campaign.

"That is shocking. And that is fashioning my walk completely," she said.

Willa Loos and Miriam Hughes, both 87, were two people the candidate found home on a September morning as she walked an area of the south central Lincoln district. They told Pansing Brooks they had not made up their minds about how to vote. But their interests are education and children's issues, and she connected to that.

She served as PTO president at all levels of the schools of her children, now 18 to 25.

"The teachers have endorsed me, so I'm just letting you know that," Pansing Brooks told the women. "I feel very honored about that."

Kathleen Maynard, who works with refugees at First-Plymouth Congregational Church, is interested in education, too, but also in environmental issues, such as the Keystone XL pipeline. Maynard is against building the pipeline through Nebraska.

The U.S. State Department has estimated 42,100 jobs could be created along the pipeline that would stretch from Canada to the Gulf Coast, with more indirect work for companies supplying goods and services. The jobs would last a year or two as the project is completed, the candidate said. But the number of permanent jobs for operations afterward is estimated at about 50.

Gun control is also a concern for Maynard.

Pansing Brooks acknowledged there is a Second Amendment right to carry arms.

"But I agree with (Supreme Court Justice Antonin) Scalia for the first time in my entire life," she said. "Not any gun in any place at any time. Now the problem is, which gun in which place at which time?"

Scalia's words in the opinion were these: "From Blackstone through the 19th-century cases, commentators and courts routinely explained that the right was not a right to keep and carry any weapon whatsoever in any manner whatsoever and for whatever purpose."

Back at home, Pansing Brooks said she is strongly against the death penalty because she does not believe it is a deterrent to capital crimes.

"I don't feel good about the state doling out death, legislating death," she said.

She would push, instead, for some agreement in the Legislature about life without parole and making sure those worst-of-the-worst criminals aren't ever allowed out of prison.

She returned to the topic of increasing the minimum wage, and pulled out a quote by Albert Einstein about humans being a part of the whole, but who experience themselves as separated from the rest, restricted.

"Our task must be to free ourselves from this prison by widening our circle of compassion to embrace all living creatures and the whole of nature in its beauty," Einstein said.

This quote is about her journey, Pansing Brooks said, and the importance of keeping Nebraska's communities strong and safe and healthy.

Go to JournalStar.com/VOTE for information about the candidates, including answers to questions that will be included in the Journal Star's Vo…

Dallas Jones knows his way around District 28 after visiting about 8,000 houses in the south-central area of Lincoln.

Patty Pansing Brooks is running against Dallas Jones for the District 28 state senator position in the Nov. 4 election.

District 28 legislative candidate Patty Pansing Brooks listens as Tony Munsterman tells her which issues are most important to him, while campaigning near Lake Street on Friday.