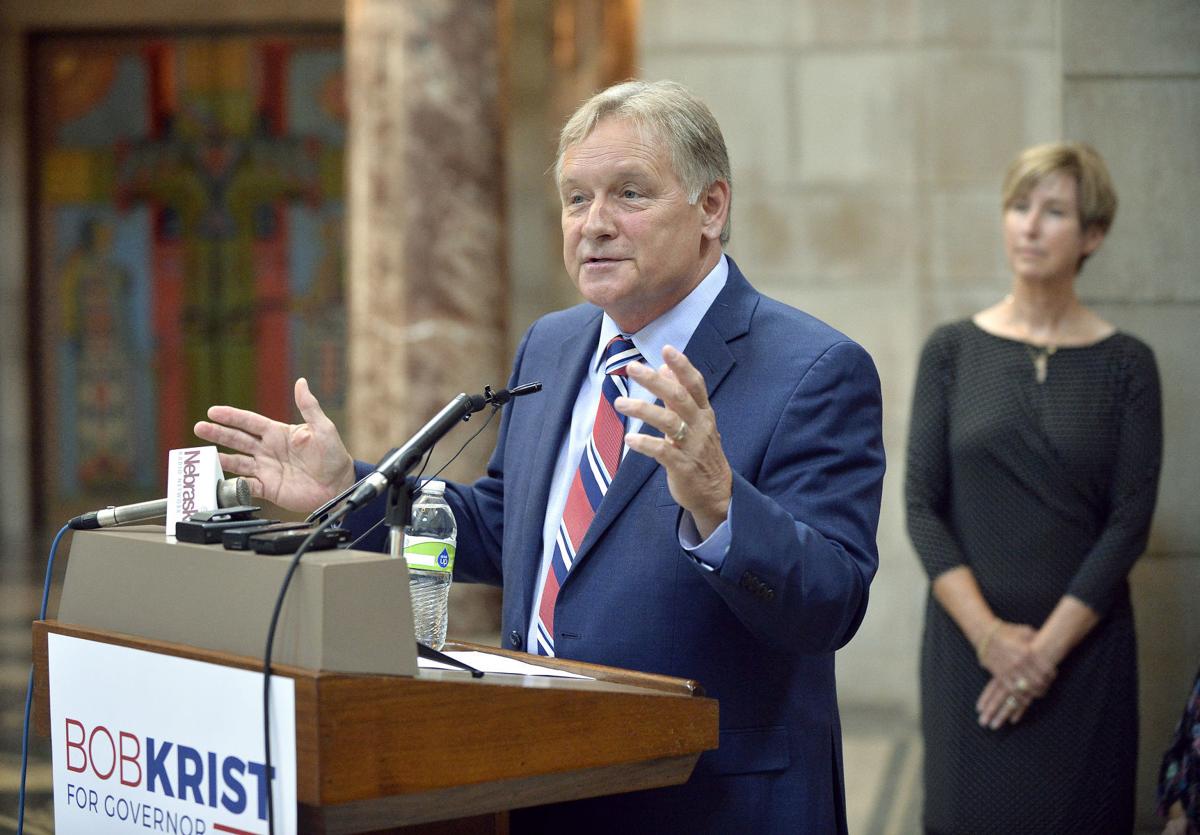 Omaha state Sen. Bob Krist talks about his independent candidacy for governor as his wife Peggy looks on at a press conference in the Capitol Rotunda on Sept. 13. 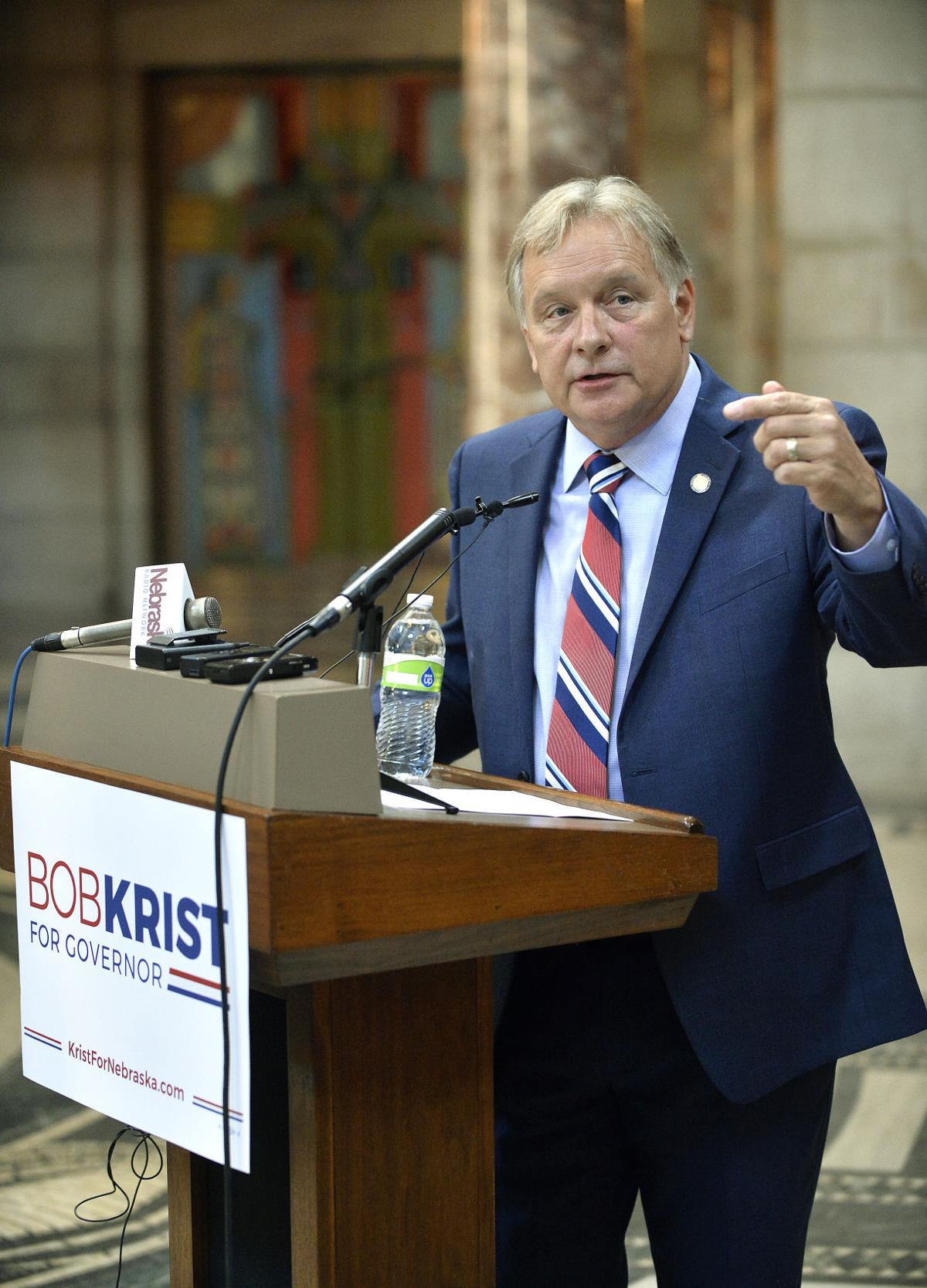 State Sen. Bob Krist answers a question after announcing his independent candidacy for governor at a press conference in the Capitol Rotunda Wednesday. 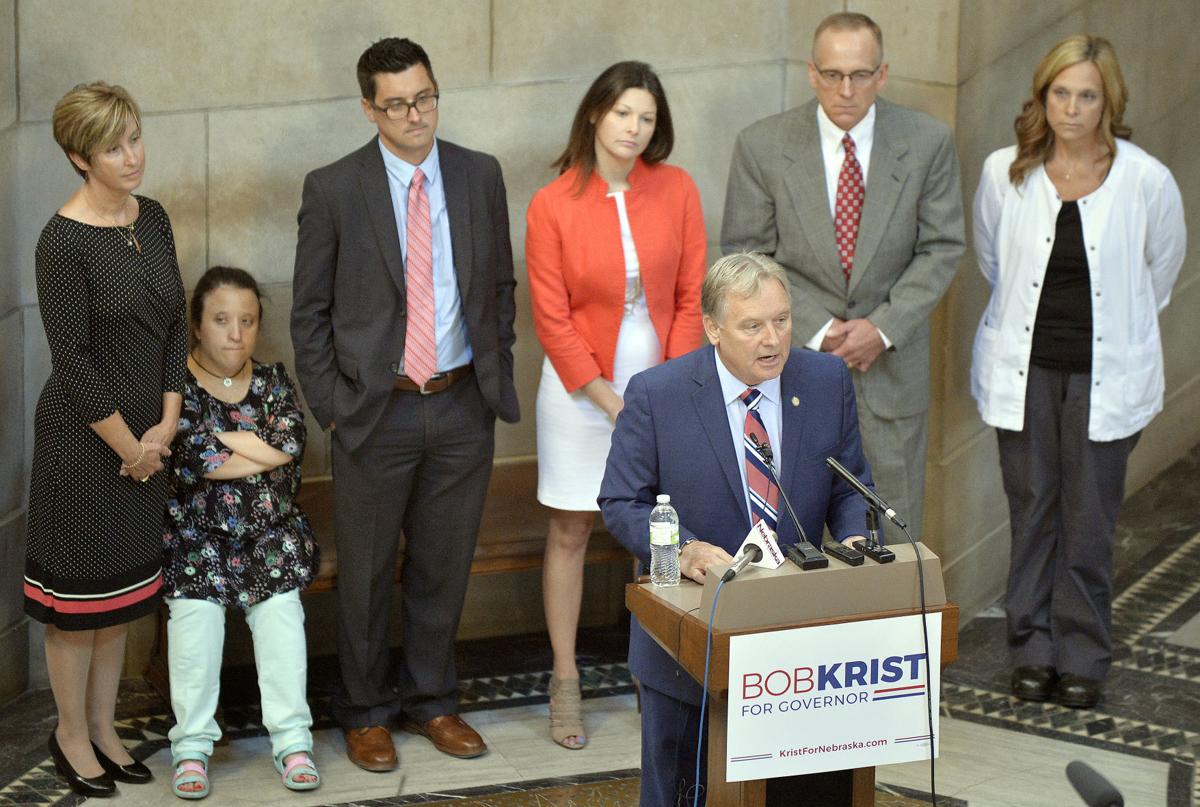 Backed by members of his family, state Sen. Bob Krist announces his independent candidacy for governor at a press conference in the Capitol Rotunda Wednesday. 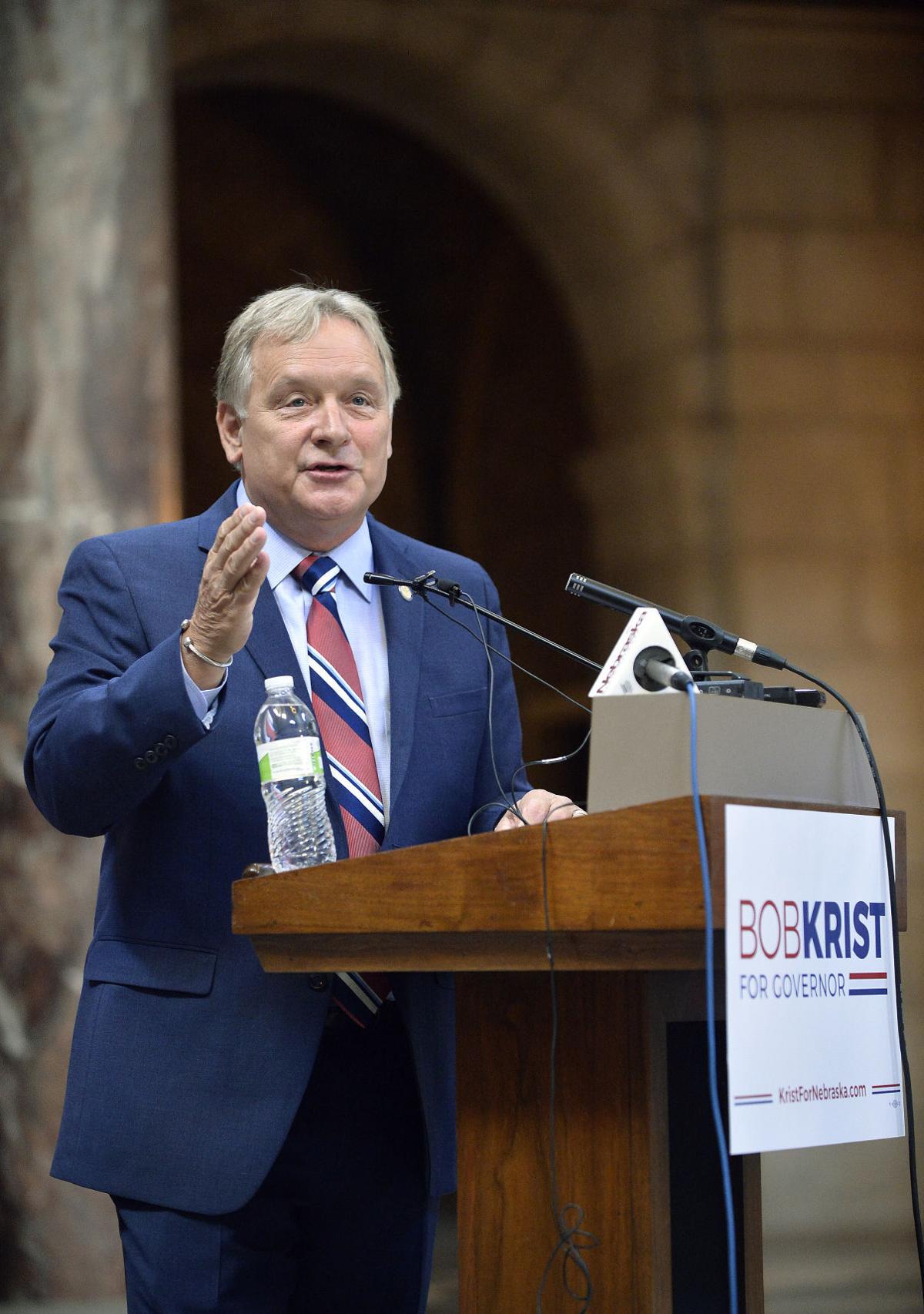 State Sen. Bob Krist announces his independent candidacy for governor at a press conference in the Capitol Rotunda Wednesday.

Omaha Sen. Bob Krist says he is fed up with partisan bickering, and believes the people of Nebraska are, too.

And so, in announcing he is running for governor of Nebraska, he said he would also give up party affiliation and register Wednesday afternoon in Omaha as a nonpartisan. It's the first time he has changed his party registration from Republican during his public life, he noted at a news conference in the Capitol Rotunda.

Krist, 60, will work in the next four months to gather the 5,000 signatures needed to create a new party to get on the 2018 ballot, he said.

Without a party affiliation, funding for his campaign could be a challenge. But Krist said a campaign doesn't have to be a billion-dollar event.

He has already begun receiving donations, he said, and promises of funding.

"I don't think that raising money is going to be easy, but I will do it by taking the time and visiting with folks around the state," he said.

Gov. Pete Ricketts spent around $7.5 million in his 2014 gubernatorial campaign.

Krist said party affiliation was the smallest part of the message he wanted to convey Wednesday.

"Nebraskans are looking for independent and effective leadership," Krist said. "We believe I am the right person to answer the call and return us to the nonpartisan traditions that made Nebraska great."

He will embark on a listening tour of the state, probably beginning before the end of the month. Krist, a retired Air Force lieutenant colonel, is a pilot and plans to fly around the state to campaign.

His decision to run has grown out of his observations from his seat in the nonpartisan Legislature for the past nine years, and the changes he has seen there, led by partisanship from the governor's office.

What pushed his decision to run was the budget debate in the 2017 session of the Legislature, he said. That budget could have been balanced in a lot of ways without taking money from Medicaid service provider rates and aid for people with developmental disabilities.

"The Legislature was once a nonpartisan body, but that’s not the case today," he said. "Now we have less conversation, less debate and more of the party highway or no way. It’s counter to everything we need to do right now. I believe the emphasis should be on working together.”

Krist said he has watched Ricketts, a Republican, personally bankroll challengers to senators who don’t vote with him right down the line.

Krist was appointed by Republican Gov. Dave Heineman in 2009, but soon showed his independent streak, parting ways with the governor on a number of votes.

He has been criticized by the Republican Party on a number of those issues. On Wednesday, state GOP Executive Director Kenny Zoeller was at the Rotunda with a press release that thumped Krist for flip-flopping on what he believes and for not being able to choose a party for the ballot.

Krist said that in his time in the Legislature he has always presented what he thought was good for the 1.9 million people across the state of Nebraska and the 40,000 he represented in District 10, and never brought party politics into it.

"So they can call me a flip-flopper all they want to. But this is the first time I've changed my party politic, even though they tried to kick me out on a couple of occasions," he said. "I can't say that enough. Let me foot stomp that one."

The state Democratic Party Chair Jane Kleeb had a much different response to Krist's announcement.

Krist's run for governor is good for democracy, she said.

"Nebraska has one-party rule right now. Democrats and independents are part of the fabric of our state and deserve a seat at the table for making decisions that impact our families," she said. "More ideas, beyond the dominant party in our state, are needed to grow the good life for all Nebraskans.”

Krist said his No. 1 priority as governor would be to focus on finding nonpartisan solutions to reduce property taxes for Nebraskans, while assuring adequate education funding.

He will also commit to fixing the problems in Nebraska's prison systems.

If elected, he said, he will declare an emergency to address prison crowding at 160 percent of capacity, with a number of them at a much higher percentage.

His campaign will focus on his conservative belief that government is too big, he said.

"We are committed to making our state government more efficient, hard working for all Nebraskans," he said. "And we must do so without harming the most fragile members of our society."

In balancing his duties in the Legislature with running for a major state office, Krist said he will not shirk any of his legislative responsibilities, which end in 2018 due to term limits. He had a good example in U.S. Sen. Deb Fischer in 2012, he said.

"She didn't skip a beat. She continued to drive toward those issues that needed to be solved. She introduced bills. She talked about bills. I intend to do the same thing," he said.

Ricketts' 2018 campaign manager, Jessica Flanagain, said until Krist successfully creates his own party, and has ballot access for the primary election, the Ricketts campaign would not comment on his candidacy.

Catch up on all of the biggest stories from this week with our local news roundup.

Sen. Bob Krist of Omaha has been named one of the nation's 50 most effective state legislators by a Washington-based government-relations data…

Krist may offer third-party choice in race for governor

Sen. Bob Krist may skip a Republican gubernatorial primary confrontation with Gov. Pete Ricketts next year and move directly to the 2018 gener…

Sen. Curt Friesen of Henderson has joined a list of incumbent senators who say they will seek re-election to the state Legislature in 2018.

Riepe to run for re-election, setting up showdown with Lathrop

State Sen. Merv Riepe announced he will seek re-election in 2018, setting up a highly contested race in Omaha's District 12 against a former t…

Nebraska sets highest bar in US for independent candidates

Omaha state Sen. Bob Krist talks about his independent candidacy for governor as his wife Peggy looks on at a press conference in the Capitol Rotunda on Sept. 13.

State Sen. Bob Krist answers a question after announcing his independent candidacy for governor at a press conference in the Capitol Rotunda Wednesday.

Backed by members of his family, state Sen. Bob Krist announces his independent candidacy for governor at a press conference in the Capitol Rotunda Wednesday.

State Sen. Bob Krist announces his independent candidacy for governor at a press conference in the Capitol Rotunda Wednesday.