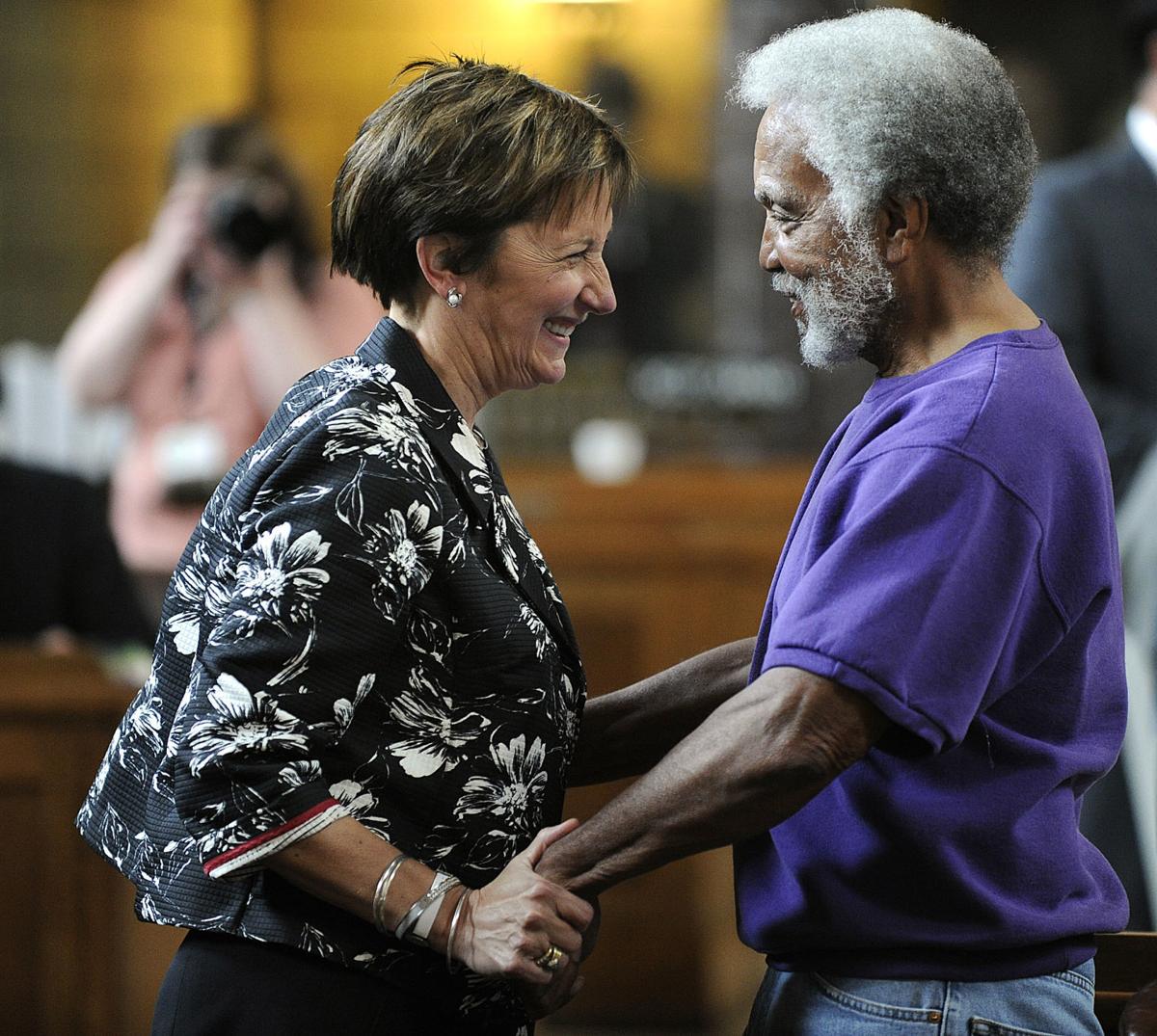 Sens. Patty Pansing Brooks of Lincoln and Ernie Chambers of Omaha celebrate in 2015 after the Legislature voted 30-19 to override Gov. Pete Ricketts' veto of a law ending the death penalty in Nebraska. 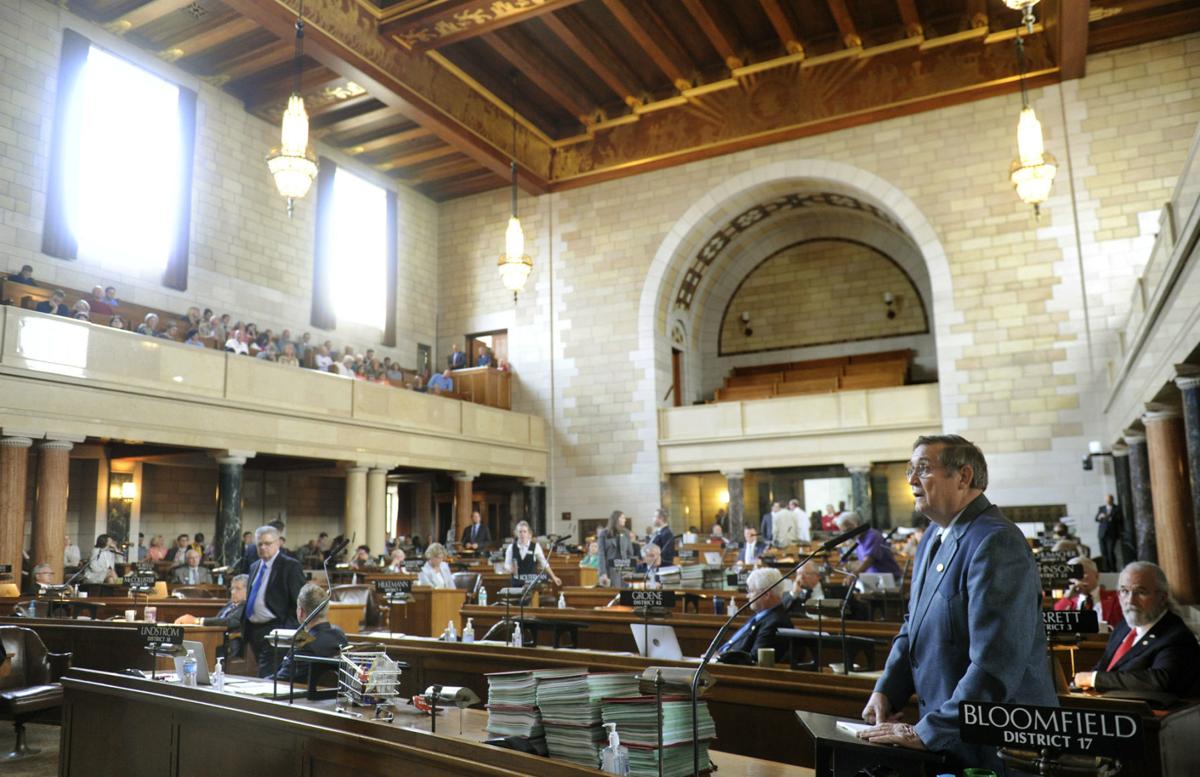 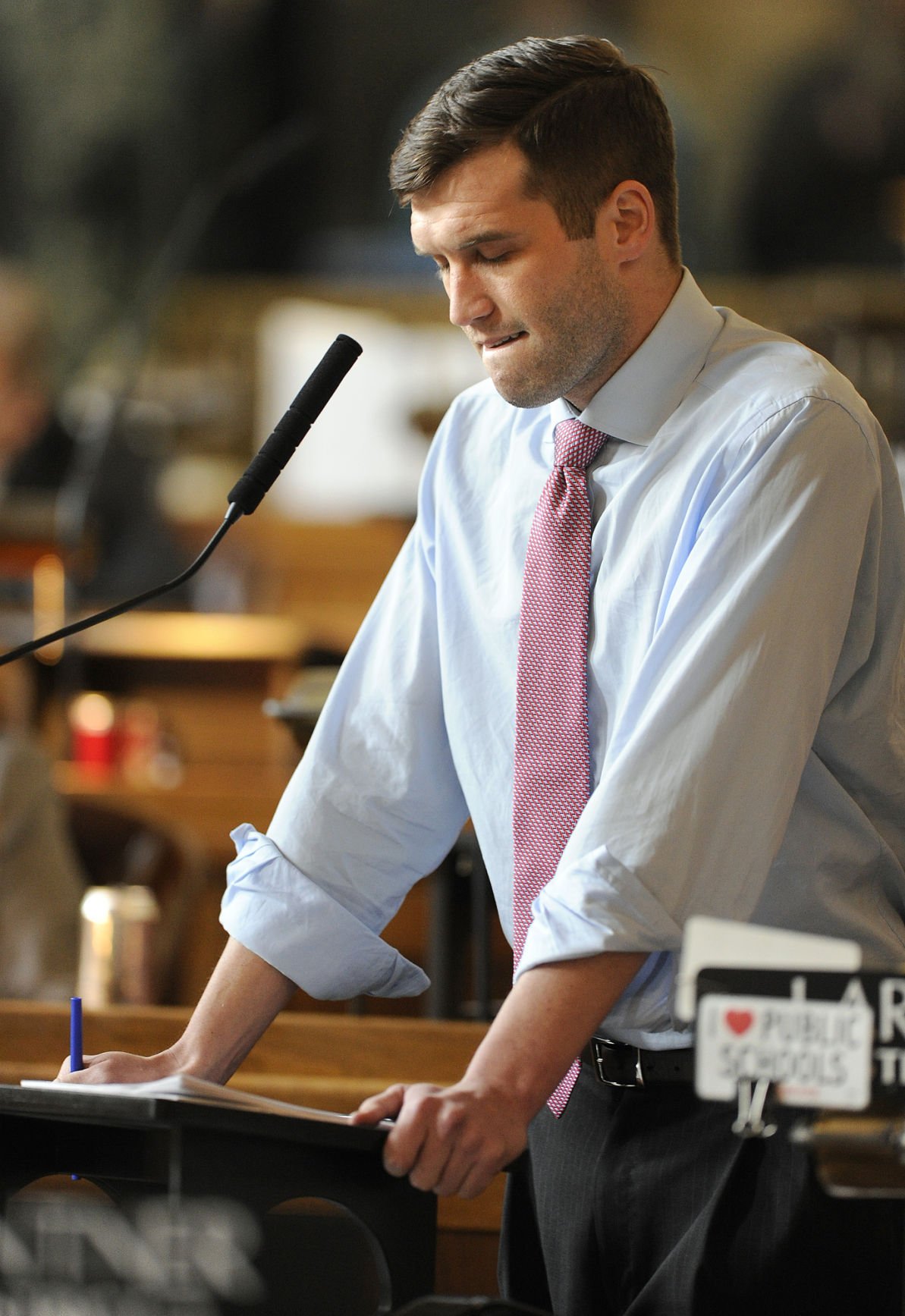 Sen. Tyson Larson of O'Neill talks Wednesday about his personal struggle to decide how he would vote on the motion to override Gov. Pete Ricketts' veto of a bill repealing the state's death penalty. Larson, who didn't vote on the bill in final-round debate, voted to uphold the veto. 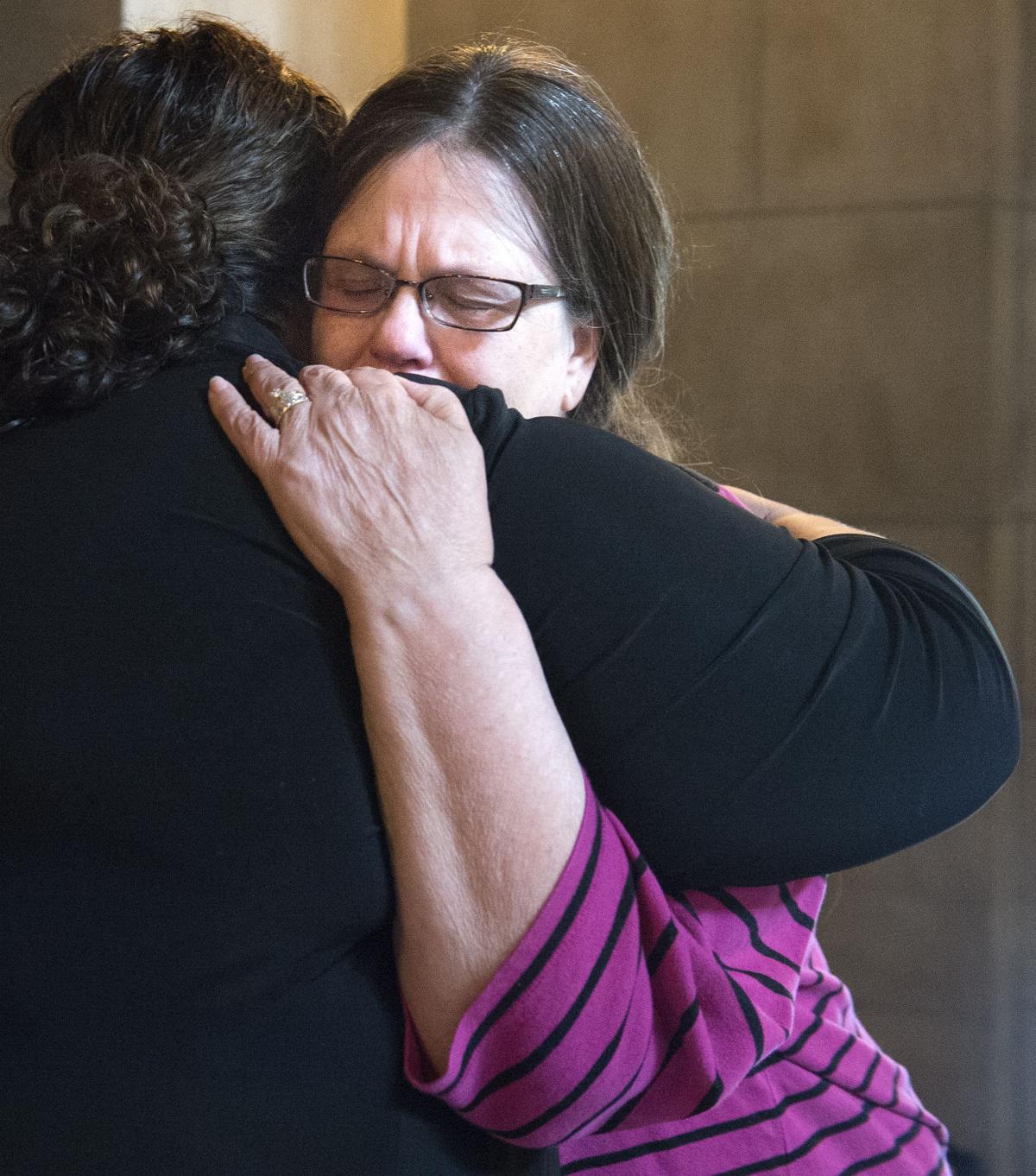 Forty years of work, piles of research, conversations and debate finally brought results Wednesday afternoon for the senator from Omaha's near north side.

“No matter how many other things I have achieved while here, had I not gotten the death penalty repealed I would have felt it was a failure," Sen. Ernie Chambers told reporters after a historic vote that saw 29 colleagues give just enough support to override a Republican governor's veto of his bill (LB268) that repealed the state's death penalty.

Even as Chambers reflected on the victory, Omaha Sen. Beau McCoy announced he will launch a potential effort to reinstate the death penalty by petition.

Miriam Thimm Kelle said Chambers was her hero. "Ecstatic," was her response after the vote. Kelle is the sister of James Thimm, who was tortured and killed by death row inmate and former cult leader Michael Ryan, who died of cancer Sunday. She has for years testified and spoken in favor of repeal of the death penalty.

That final step on Chambers' 40-year journey -- as epic as it was -- was not the doing of one person but many, Chambers said. The fight transcended him, the Legislature and the state, he said.

"It's the story, it's not me," he told reporters after the vote.

It's the story of Nebraska, a red state, the first conservative state as deep dyed as this one to abolish the death penalty in decades, Chambers said.

If Lincoln Sen. Roy Baker had voted no or had not voted, it would not have gotten done, he said.

Chambers asked that the roll call vote on the override be taken in reverse order, and Baker was the last to vote.

But Baker said he didn't consider his vote any more important than the 29 others to override the veto. He had not wavered, as some other senators had, in his support of repeal.

Previous to joining the Legislature this year, Baker said he thought it was OK for the state to have a death penalty. But the more he had thought about and researched it -- and given that he once taught former death row inmate Randy Reeves in Central City -- alternatives also became acceptable, he said.

But it was a heart-twisting decision for some, including Sen. Tyson Larson of O'Neill.

"Today my conscience weighs heavier than it ever has in this body," he told senators. "I represent probably the most Catholic district in the state. And I've heard from both sides in that district, a lot."

He questioned why the state should take a life.

"Today I will sustain the governor's veto because I campaigned on it. But this is fair warning," he said. "I'm telling you now, that next time this comes up, it might be different. It might be the last time I give this state the right to take a life."

As he and other senators who were expected to be potential swing voters fell away, some thought Omaha Sen. Robert Hilkemann might be the last hope.

But his vote to override was not the deciding one, he said. "We were all No. 30."

"I really think we were on the right side of history. How many times has this issue come up one vote short? And the system has never been fixed in all those years."

Chambers said he did not know if any state has ever abolished the death penalty over the veto of a governor.

"The veto was a personal struggle between me and the governor," he said. "And he lost."

He lost hard. Gov. Pete Ricketts said words cannot not express how appalled he is that this critical tool to protect law enforcement and Nebraska families was forfeited.

“While the Legislature has lost touch with the citizens of Nebraska, I will continue to stand with Nebraskans and law enforcement on this important issue,” he said.

In his veto letter, he had said retaining the death penalty was important to the integrity of criminal prosecutions and to good prison management.

"This fact cannot be overlooked given the recent prison disturbance in the Tecumseh facility, during which two inmates were intentionally killed by another inmate or inmates," he said.

Without the death penalty, Ricketts said, an inmate is fearless of more serious sanctions.

Ricketts and other death penalty proponents had put serious pressure over the past week on senators they thought could be persuaded to vote to uphold the override.

The bill had passed a final round May 20 on a 32-15 vote. Thirty votes were needed to override Ricketts' veto, and negotiations appeared to continue throughout the 2½ hours of debate.

In the end, two senators -- Jerry Johnson of Wahoo and John Murante of Gretna -- who had voted last week to repeal, decided to sustain the governor's veto. And Larson and Sen. Ken Schilz of Ogallala, who had not voted on the final round, also sided with Ricketts.

Johnson said he became convinced it was a priority of the governor to fix and carry out the death penalty. Repealing it would be softening the state's stance on crime, he decided.

The lights were barely out on the vote board when McCoy hit a button to launch Nebraskans for Justice, an organization that will explore the possibility of a ballot petition to reinstate the death penalty.

"I am standing with Nebraskans who are thoroughly disappointed with Nebraska legislators who voted to end Nebraska's death penalty," McCoy said.

If successful, the earliest the issue would be on the ballot would be November 2016.

Nebraska joins 18 other states and the District of Columbia in abolishing the death penalty.

Jim Mowbray of Nebraska Commission on Public Advocacy, which has represented many of the state’s death row inmates, said he had promised Harold Lamont "Wili" Otey before his execution in 1994 that he would do everything he could to repeal the death penalty.

“I’m glad it’s over, and I’m hopeful that it will remain that way,” Mowbray said.

Gov. Pete Ricketts condemned the decision to repeal the death penalty in Nebraska, while people who had fought to abolish the state's power to…

Nebraska's attorney general said Thursday he will seek a court decision on the state’s authority to carry out the sentences of 10 death row inmates.

Gov. Pete Ricketts on Friday praised the Nebraska Legislature for working with him to reduce the growth of state government and provide increa…

Legislative session adjourns; called one of 'most difficult'

The 2015 legislative session was a year of tough decisions -- the most difficult of Speaker Galen Hadley's seven years, he told senators Frida…

McCoy will study putting death penalty to vote of the people

Omaha Sen. Beau McCoy -- an advocate for the death penalty in Nebraska -- said Thursday he could see its repeal coming two years ago.

Suddenly he was in the eye of the storm.

Group will seek signatures to put death penalty on the ballot

The words of disappointment from some Nebraskans about the recent vote to repeal the state's death penalty has turned to action.

Death penalty opponents got a cash injection Friday, and death penalty advocates accused them of using it to suppress voter rights.

2015 was a historic year for Nebraska in many ways. Here are 10 of the top news stories for the year.

Senators voted 30-19 Wednesday to override a veto by Gov. Pete Ricketts on a bill (LB268) to repeal the death penalty.

Gov. Pete Ricketts delivered Tuesday on his promise to veto legislation that would repeal the death penalty for capital murder in Nebraska, an…

Death penalty in the U.S.

Randy Reeves was a 24-year-old construction worker when he killed two women in Lincoln in 1980. He was 60 when he died Wednesday night at the …

A group of people that includes a former Lincoln police captain, deputy county attorneys and retired judges is urging voters to retain the Leg…

Sens. Patty Pansing Brooks of Lincoln and Ernie Chambers of Omaha celebrate in 2015 after the Legislature voted 30-19 to override Gov. Pete Ricketts' veto of a law ending the death penalty in Nebraska.

Sen. Tyson Larson of O'Neill talks Wednesday about his personal struggle to decide how he would vote on the motion to override Gov. Pete Ricketts' veto of a bill repealing the state's death penalty. Larson, who didn't vote on the bill in final-round debate, voted to uphold the veto.