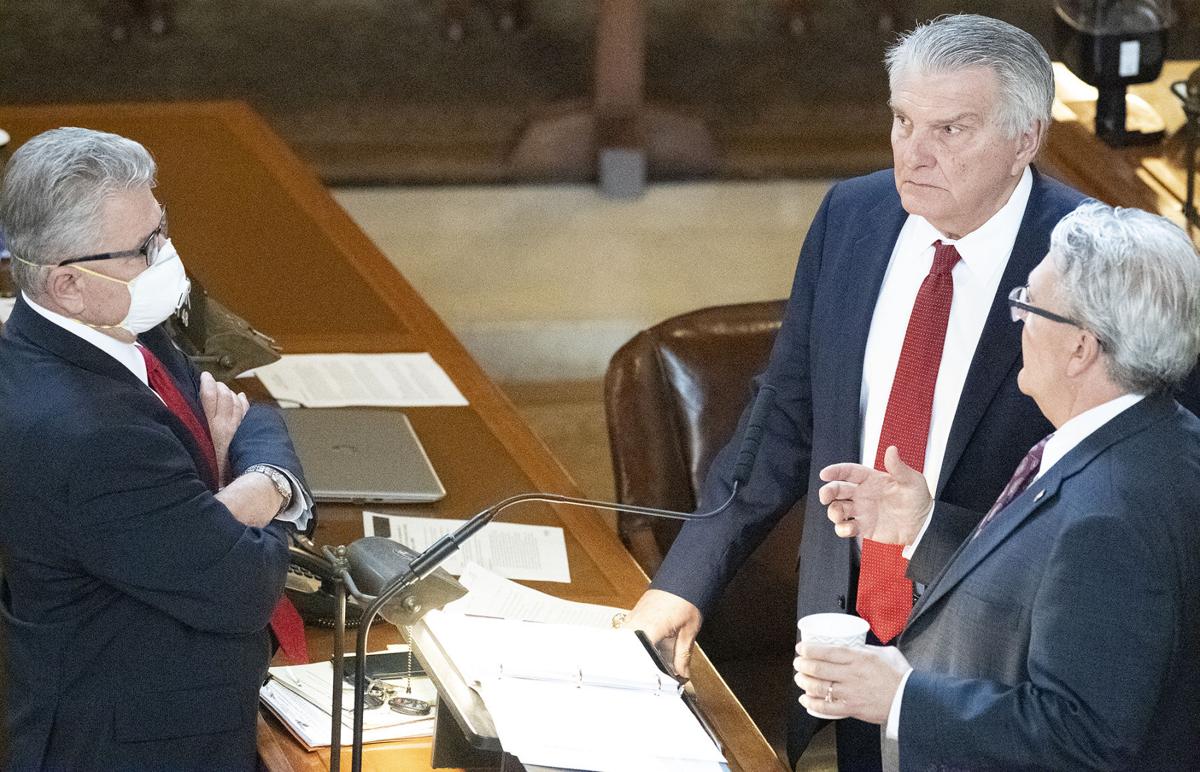 Sen. Mark Kolterman (left) wears a mask as he speaks with Sen. John Stinner (center) and Speaker Jim Scheer on the floor of the Legislature last March. 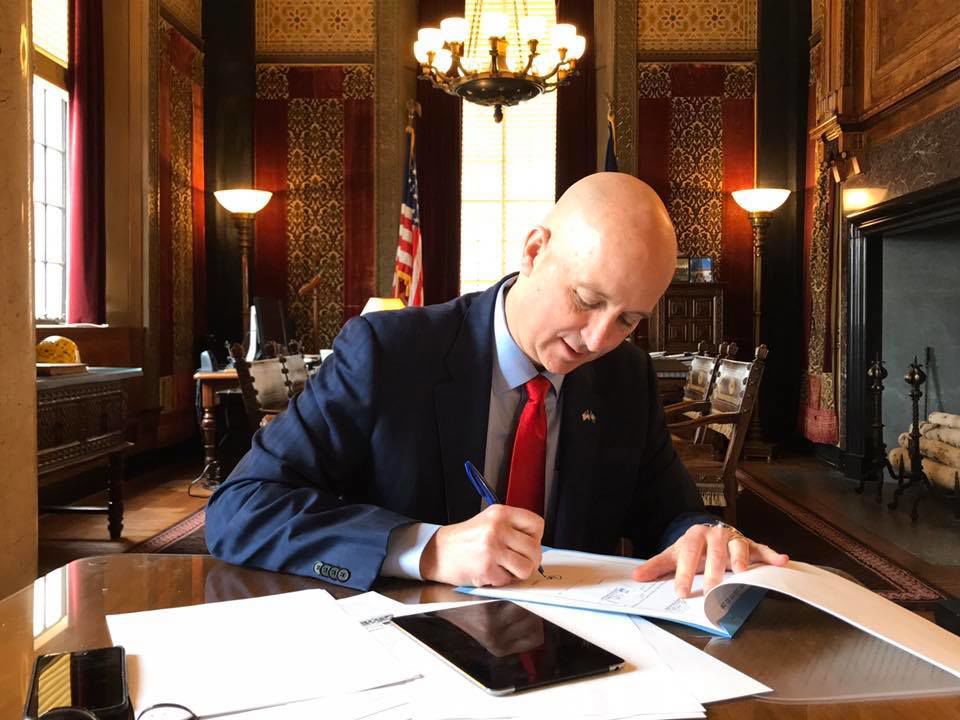 The Nebraska Legislature has passed and Gov. Pete Ricketts has signed an $83.6 million COVID-19 emergency funding bill for necessities connected to the novel coronavirus that is spreading through the state.

The money will go to the Department of Health and Human Services and the University of Nebraska Medical Center for such things as medical and laboratory equipment, personal protective equipment, UV light boxes, staffing and testing.

Forty-five of 49 senators came together Wednesday for about 25 minutes to vote on the bill and then wait for it to be signed and read into the record. A rule was suspended that requires spending bills to be held until budget bills are read a third time and not be read on final reading prior to Day 45 of the legislative session. Wednesday was Day 43.

In an emotional speech after the vote, Speaker Jim Scheer told senators he appreciated them coming in this week and passing the bill.

"It was a very hard decision for me to do," he said, his voice breaking. "We have used three days. I've been criticized in some arenas for this. But we're doing what we need to do at a time that it needs to be done. And I thank you for the passage of the bill."

The Legislature provided not only what the governor asked, Scheer said, but with additional funds that will help the state recover and minimize the damage done to the state's economy and residents in the future.

He explained that several senators had not been there for the three-day session, and he didn't want anyone to think they had not wanted to be there to vote. The members are among those, by age or health, who have been advised to stay home and not attend gatherings of people, and they were being smart and stayed away, he said.

Scheer said he didn't know when the Legislature would be called back into session for the remainder of the 60-day session.

"I want to make sure that we are safe when we do come back," he said.

One reason the second session is short is to allow those running for reelection to be able to campaign before the primary, he said. And for that reason, even if things do calm down enough, he would still not plan on meeting in those two weeks before the primary election, which is May 12.

"When we do return, I don't anticipate that we're going to have business as usual," he said.

The first priority will be to pass the 2019-21 budget adjustment bills and the claims bill. After that, he will prioritize bills for the agenda that he feels will need to be passed in the time crunch. He asked senators to tell him why their priority bill was important, if it's not obvious.

He asked them not to hang additional legislation onto bills.

"I am now going to ask you for your patience, because we need your patience," Scheer said. "We have already complicated everybody's life to a large extent already by having to take our pause."

When senators are able to reconvene for 17 days, his plan is to run Monday through Saturday for two consecutive weeks, and then Monday through Friday on the third week. And the days will be long ones.

If a bill is in danger of a veto, he said, he will try to accommodate its vote so it doesn't become subject to a pocket veto by the governor, returned when it is too late for a possible override attempt.

He asked senators to think about cooperation.

"The state will be looking at us. We need to be statesmen."

Only a few dozen students of the 760 who lived in university housing this year remain on Nebraska Wesleyan's campus after it closed due to coronavirus.

"We would all like to get back to normal as quickly as possible," the governor said, "but protective health measures" must come ahead of that goal.

Musicians put on a show outside Lincoln assisted-living center

Residents watched and listened from their apartments and the balconies overlooking the center’s courtyard.

The Senate on Wednesday passed a $2.2 trillion coronavirus relief package despite an attempt by a group of senators including Nebraska's Ben S…

A UNMC professor and infectious disease specialist says models are not meant to be answers.

"Each agency will have some kind of deterioration due to COVID-19, so there will be increase in costs and other adjustments that we'll have to make," Sen. John Stinner said.

Sen. Mark Kolterman (left) wears a mask as he speaks with Sen. John Stinner (center) and Speaker Jim Scheer on the floor of the Legislature last March.