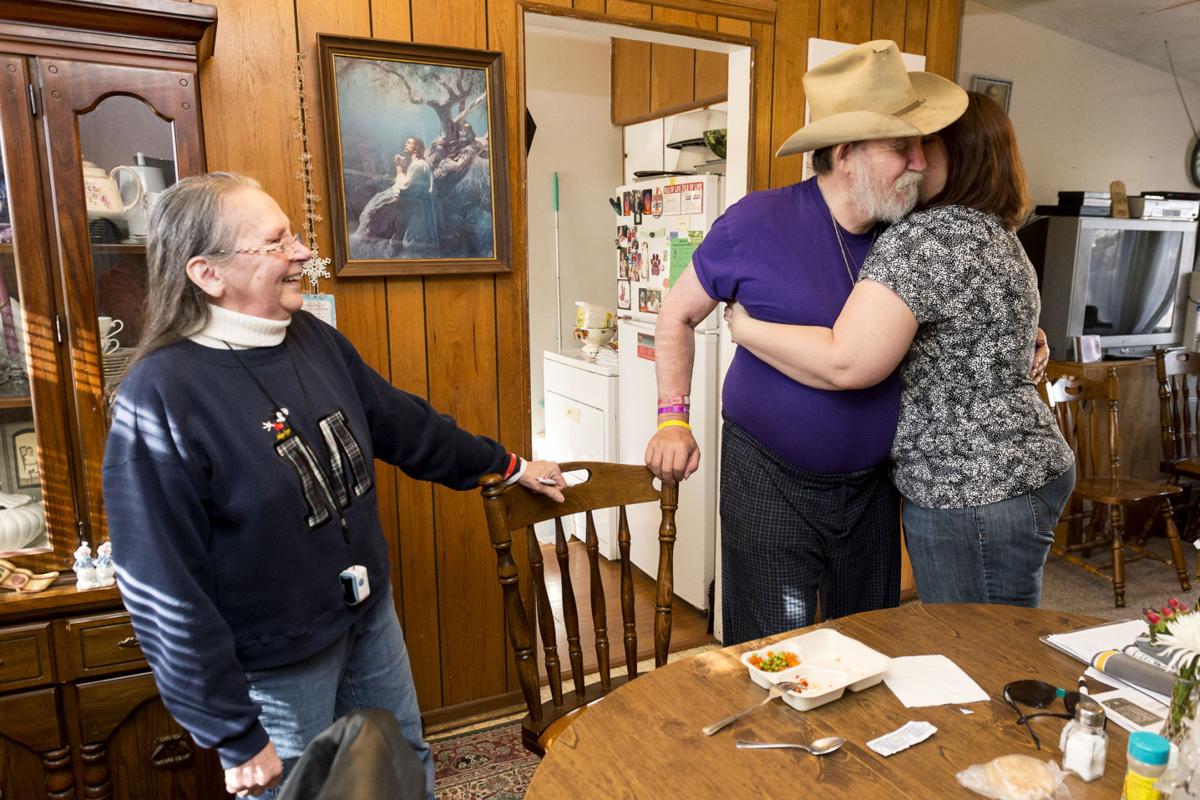 Teresa Thompson (left), primary caregiver to her husband, Dean, who suffered a traumatic brain injury in 1999, smiles as he gets a hug from their daughter, Kayla Stanley, at their home in north Lincoln. 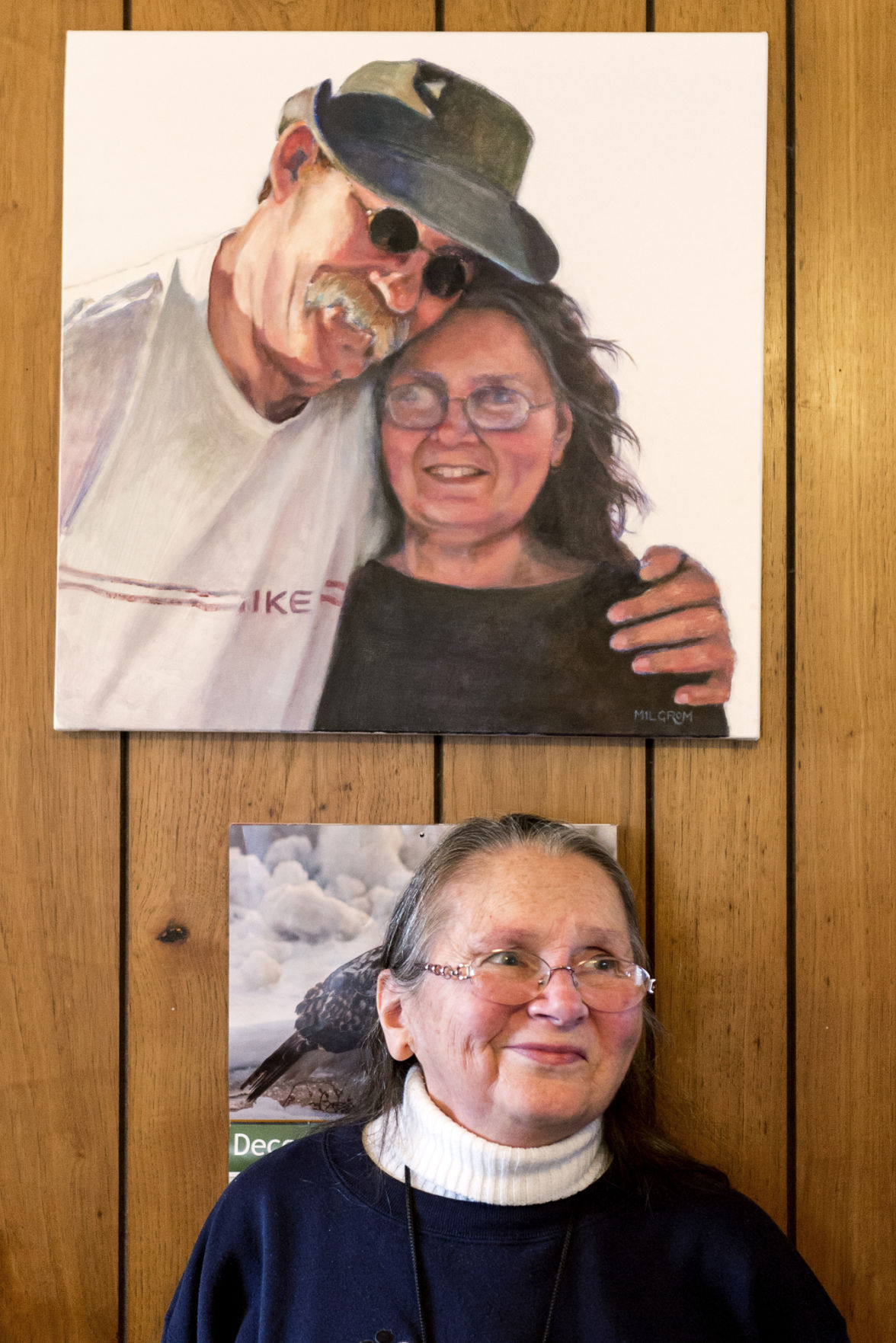 Teresa Thompson smiles beneath a painted portrait of her and her husband. Fifty-three caregivers from across the nation each received a hand-pointed Portrait of Care from AARP last year. 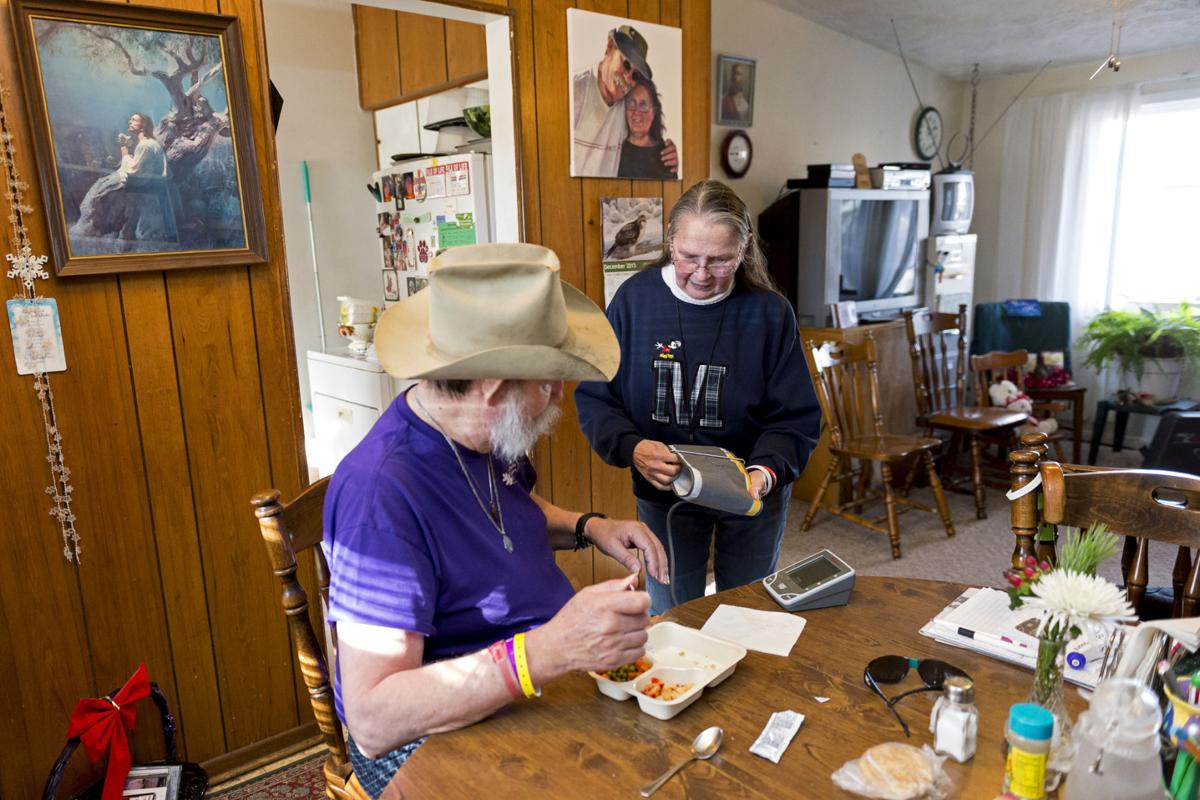 Teresa Thompson (right), primary caregiver to her husband, Dean, who suffered a traumatic brain injury in 1999, takes his blood pressure in mid-December at their home in north Lincoln. 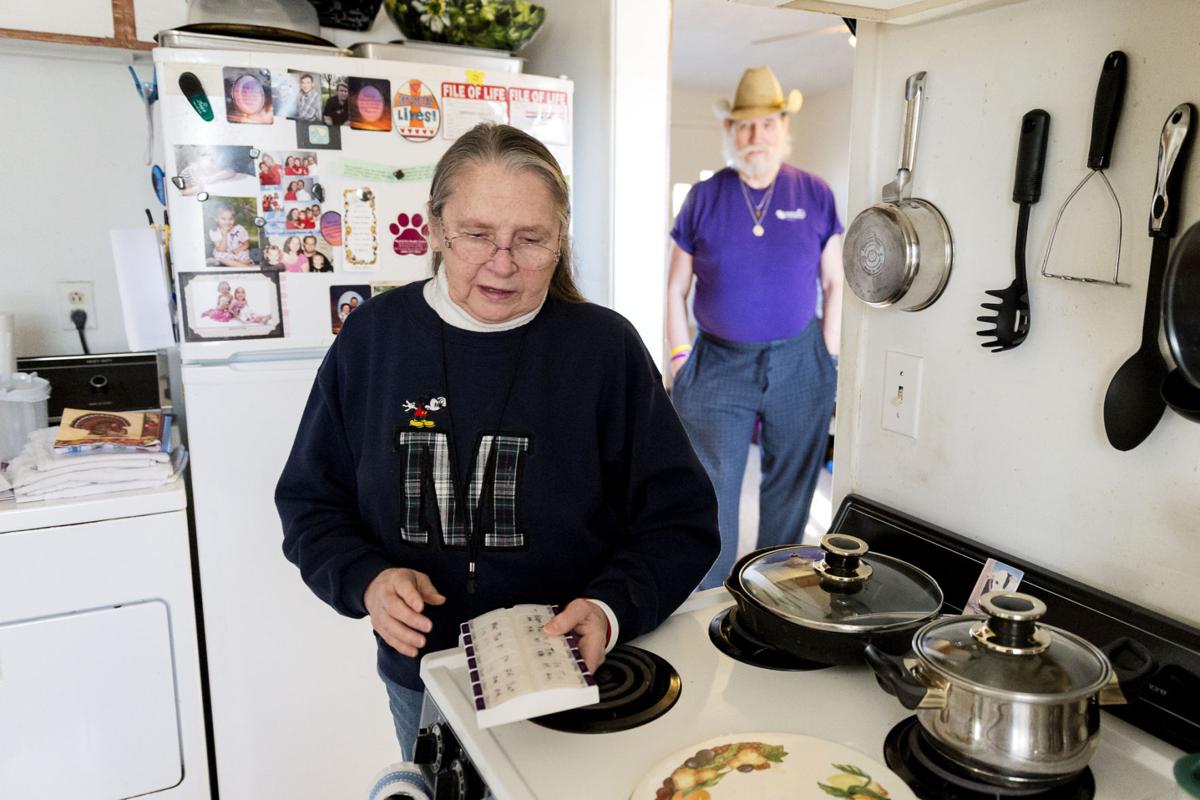 Teresa Thompson, primary caregiver to her husband, Dean, who suffered a traumatic brain injury in 1999, looks over his pill boxes at their home in north Lincoln.

Teresa Thompson finds her husband, Dean, in the living room without his oxygen tank and has to get it for him. She tries to fall back asleep but can't, and now she's helping Dean get breakfast, letting out the dog, changing Dean's dry-erase board so he knows the day's agenda, helping with his pills, seeing him off to day camp, washing dishes, writing a blog, showering then finally eating herself.

The routine breaks when Dean's blood pressure reads dangerously high. Or when he disappears in the middle of the night, like he did last spring before turning up at a gas station five blocks from home.

Or when he falls, like he did in September, tumbling down the doctor's office steps and landing in an emergency room, spending three days in a hospital, then going to Tabitha Health Care for a night, back to the hospital for three more days then rehab for two months.

Rehab is like prison, Dean says. So is anywhere but home.

So he and Teresa stay here, in the two-bedroom house they bought at 51st and Benton just weeks before Dean's accident.

"I've been doing everything for 16 years," Teresa says.

Dean's had bad luck his whole life when it comes to his body.

As a toddler in Montana, he crawled out of his highchair and fell down some stairs, knocking himself unconscious.

He rolled a tractor off a 20-foot cliff hauling trash while serving time in an Idaho prison in his early 20s. Knicked his arm with a chainsaw while working as a logger. Flipped a logging truck he'd overloaded before driving down a mountain road.

It's possible his brain was already battered, Teresa said, but that year's blow was the knockout.

Teresa was unpacking in Lincoln after getting a librarian job in Cedar Bluffs and moving from North Carolina. Dean was helping a farmer friend outside Knoxville, Iowa, where the couple had lived years before.

The man's tractor barely worked. Dean, a good mechanic who'd been "driving junk" his whole life, had to climb outside the tractor to get it started.

One day, his friend saw smoke in the field and came to check on him.

He found Dean unconscious; it looked like he'd been beaten.

"They found the tractor off in some weeds, still going," Teresa said.

It had rolled over Dean length-wise, crushing him from head to foot.

He spent a week in a coma, two weeks at a hospital in Des Moines and about three months at Madonna Rehabilitation Hospital. He lost his sense of smell, some hearing and the use of his right eye. The damage to his frontal lobe cost him cognitive function, emotional control and reasoning.

"Basically it killed me," Dean said.

The experience also jolted the Thompsons' only daughter, Kayla, a quiet student at College View Academy who had just turned 17.

"I didn't make a lot of friends," she said. "I think I had one friend named Jessica."

Her dad returned home right before Christmas, his fuse shorter than before. He and Kayla fought constantly for almost a year, to the point that she transferred to a boarding school.

Now 33 and a mother of two, she's learned to navigate her father's state of mind, although not as well as her mother.

"She is really the only one that gets along with him when he is in one of his moods," Kayla said. "She's a saint."

For years, Teresa essentially cared for Dean on her own.

Now she has some help: a nurse who visits weekly and sorts his 10 medications, a bath aid three times a week, and programs at Easterday Recreation Center that take Dean away from home and leave Teresa with personal time.

"Right now I have a very meaningful life," she said. "I'm able to reach out to people that are struggling too — much harder than I am."

She joined the state Brain Injury Association, serves on the board for the Southeast Nebraska Respite Network, and is active in the Nebraska Caregiver Coalition. In November, she accepted a proclamation from the governor declaring it National Family Caregivers Month in Nebraska.

She's written two short books about her experience and blogs for herself, caregiver.com and Outlook, a magazine for Seventh-day Adventists in the Midwest. Her picture was on last month's cover.

Dean had folded the towels from the dryer without being asked, she wrote.

"As he put the last one away in the closet (leaving me with the washcloths to do), he came to announce at the door of my computer room that he would like to list all the ways he helps me around the house. Here's all I do, he said, (as I mentally prepared to discount all his assertions):

But Dean — such a social butterfly they had to switch churches — brings her laughter, love and a purpose for living, she wrote.

"What would I do without him?

"Maybe God isn't helping me with all the material things of the world these days either, but He's always there supplying me with intangible rewards that I wouldn't want to do without."

Teresa says she's following a "God-driven" path to care for her husband and family as well as help others care for their own.

"He finds a mission for you."

Suzy Campbell and her husband had a "terrible time" when he returned home from the hospital, a wound in his back from a procedure to address h…

Teresa Thompson (left), primary caregiver to her husband, Dean, who suffered a traumatic brain injury in 1999, smiles as he gets a hug from their daughter, Kayla Stanley, at their home in north Lincoln.

Teresa Thompson smiles beneath a painted portrait of her and her husband. Fifty-three caregivers from across the nation each received a hand-pointed Portrait of Care from AARP last year.

Teresa Thompson (right), primary caregiver to her husband, Dean, who suffered a traumatic brain injury in 1999, takes his blood pressure in mid-December at their home in north Lincoln.

Teresa Thompson, primary caregiver to her husband, Dean, who suffered a traumatic brain injury in 1999, looks over his pill boxes at their home in north Lincoln.