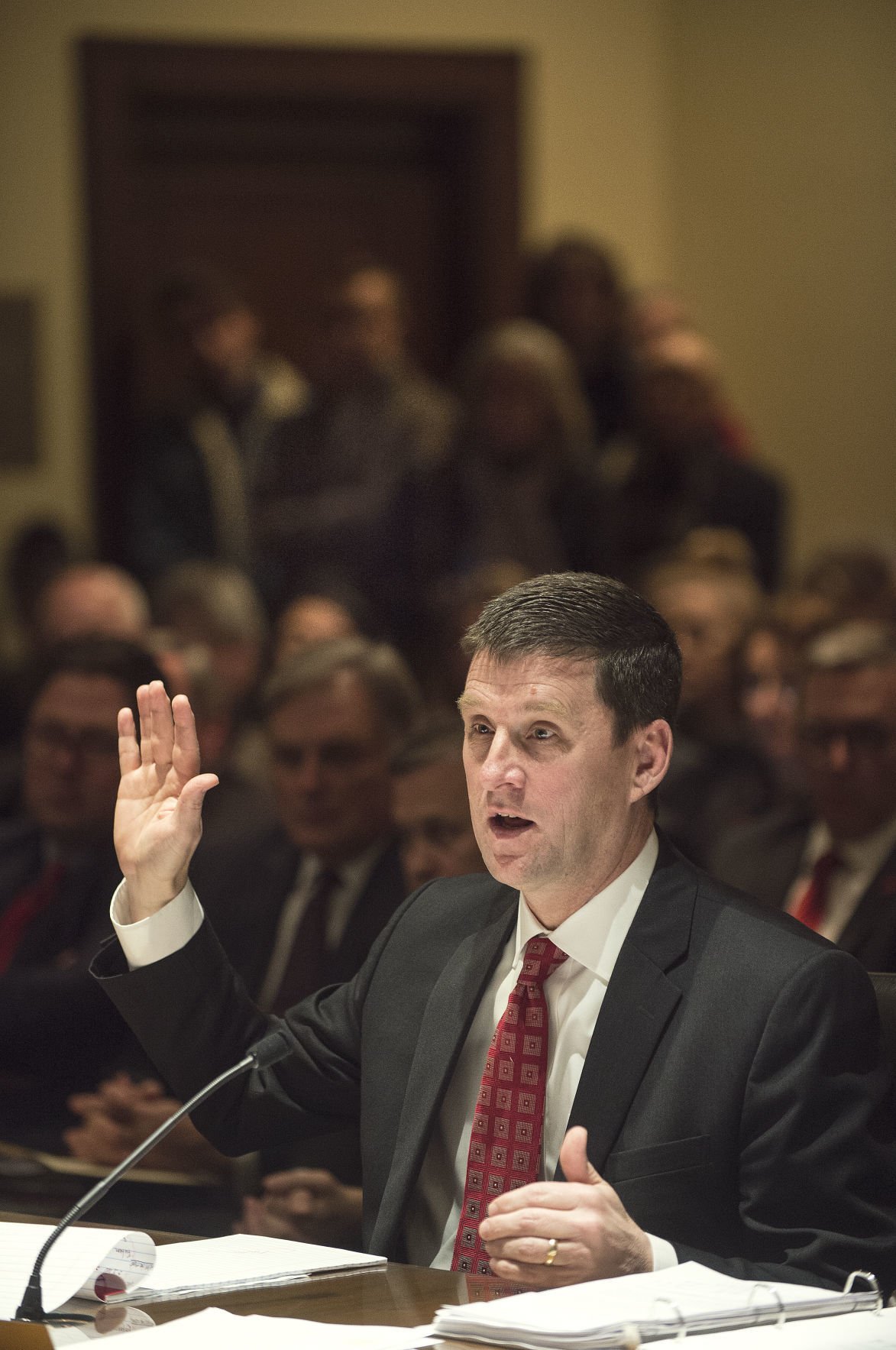 University of Nebraska President Hank Bounds testifies before the Legislature's Appropriations Committee in 2018. 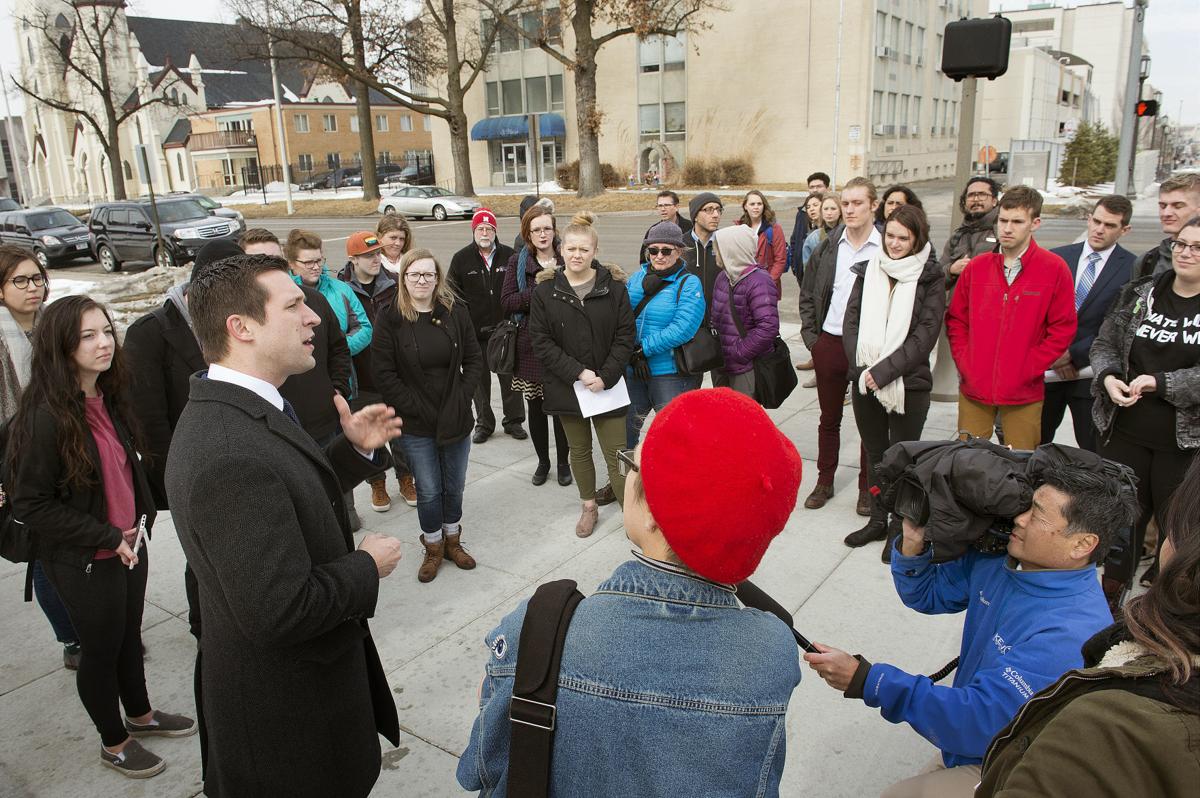 State Sen. Adam Morfeld of Lincoln speaks with students, other NU supporters and media on the north side of the Capitol before leading the group inside to attend the university budget hearing Wednesday. 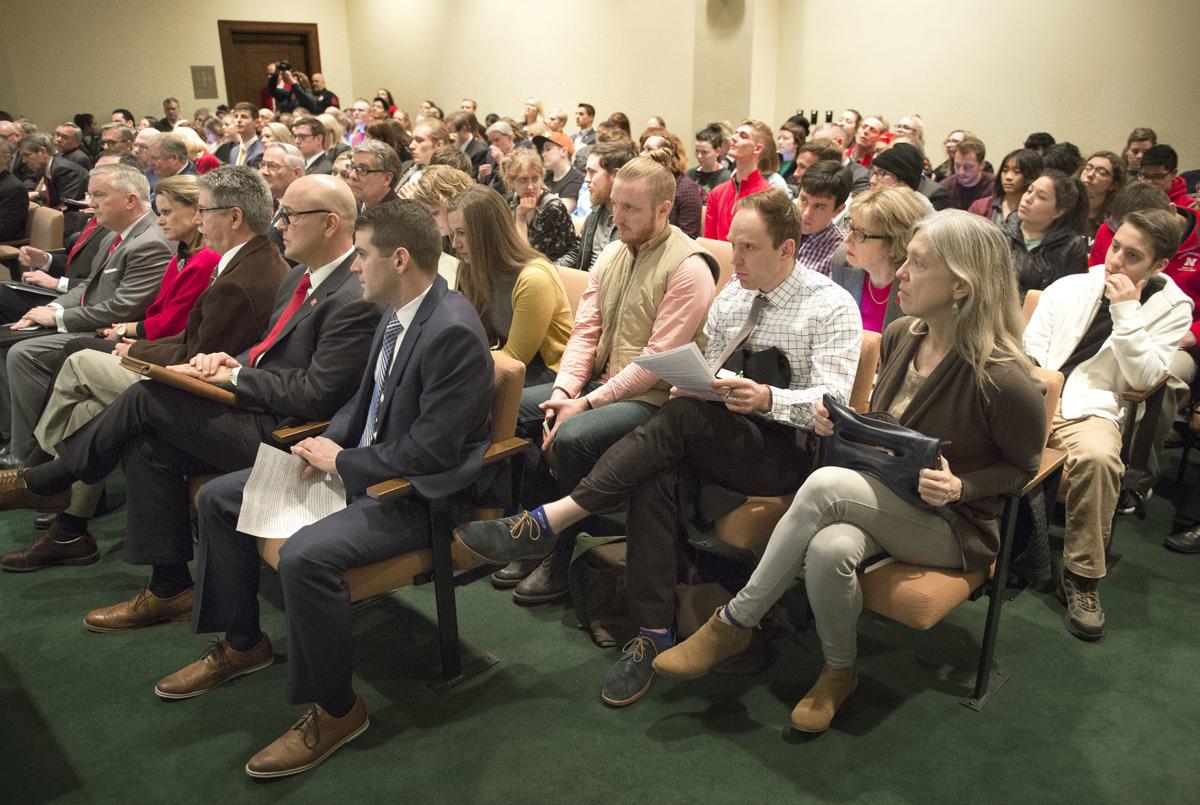 Students, university officials and others pack the first-floor hearing room Wednesday at the Capitol for the Appropriations Committee hearing on the NU budget. 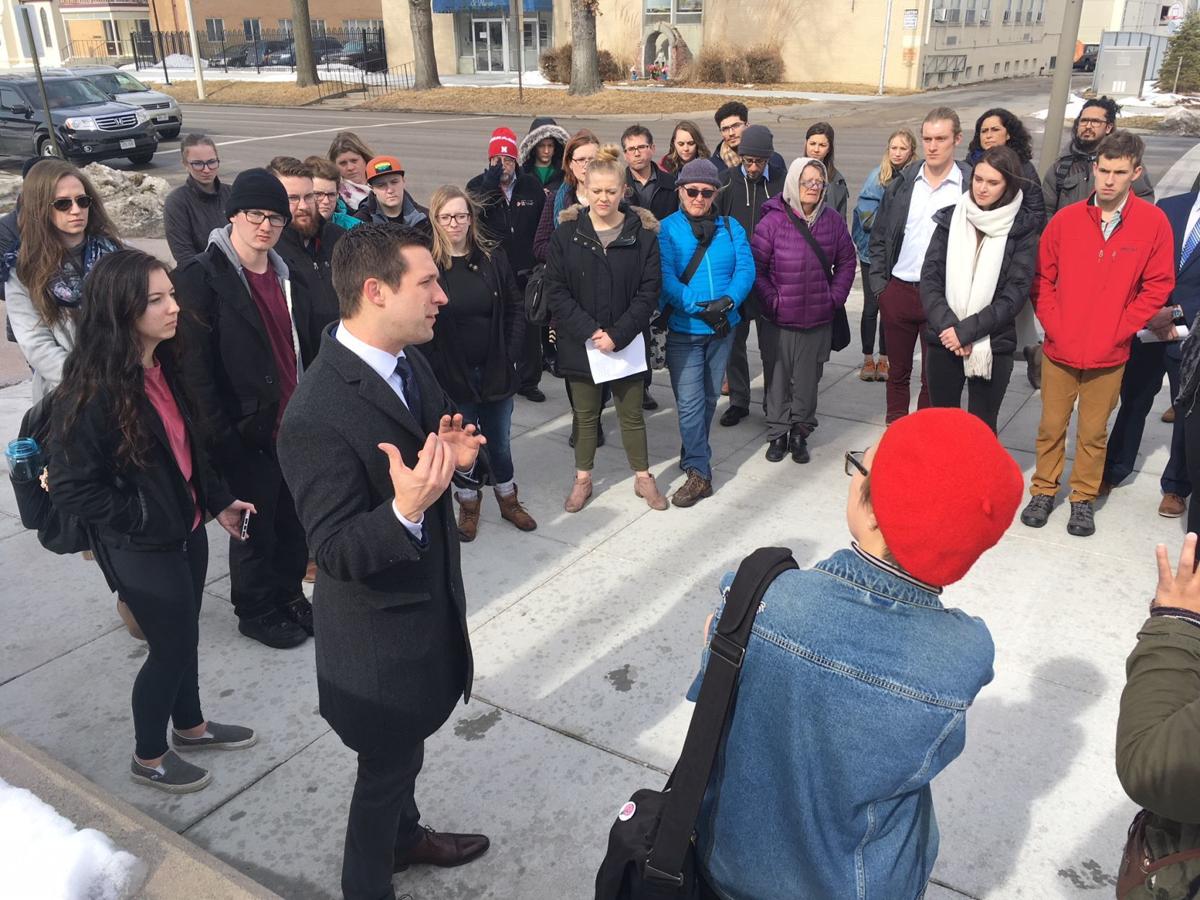 Students and other University of Nebraska supporters gather outside the state Capitol in advance of a hearing on the university budget earlier this month.

“If we want this to be a place where our children and grandchildren will live and work and raise a family, we have to invest in one of the primary economic drivers our state has," he told members of the Legislature's Appropriations Committee on Wednesday. "That is the University of Nebraska, and frankly all of higher education."

Casting the state's financial support for the university as a moral issue, Bounds, now in his third year as NU’s president, then asked senators to consider the consequences of a plan put forward by Gov. Pete Ricketts earlier this year.

In that plan, NU would lose $11.4 million in state aid by June 30, as well as $23.2 million next year, forcing the university to cut programs and people and consider significant tuition hikes to close a budget gap estimated at $69 million.

Bounds said that choice would transform the university and potentially close the door on a college education for some of Nebraska’s youth, or force them to increase their student debt loads, potentially making it harder for graduates to contribute to the state’s economy in the future.

“That seems exactly the wrong message to send for an institution that was founded on the principle that a university education should be accessible not just to the wealthy,” he said.

Bounds' comments kicked off an afternoon hearing that lasted more than four hours, drawing passionate testimony from university officials, as well as students and others who view the proposed cuts as potentially damaging, even devastating.

Regent Rob Schafer of Beatrice framed the potential loss of state aid to the university in another way — as a tax increase on NU’s roughly 53,000 students, informing each senator on the committee just how many families in their district would have to scrounge up extra tuition money.

According to Schafer, that meant more than 1,200 families in Sen. Bob Hilkemann’s Omaha district; 700-plus students in Sen. John Kuehn’s south-central Nebraska district; 450 in District 1 represented by Sen. Dan Watermeier of Syracuse; and 830 in Lincoln Sen. Anna Wishart’s district.

Packed into the committee room, each eagerly waiting to tell their story to lawmakers, were the “sons and daughters of the farmers and ranchers and middle-class families who dream of a better future for their children,” as referenced by Bounds.

Carlo Eby, the student body president at the University of Nebraska at Omaha, told senators he was among the 44 percent of UNO students who are the first in their families to attend college, the son and grandson of house painters who dreamed of providing him more opportunities.

“I encourage you to spend a day at UNO, inform students that their tuition is going to increase, but not to worry, because it’s still affordable,” he said, adding later: “Send a message to future students — the future leaders of this state — that you care.”

After Seth Marshall’s family lost its home to foreclosure when he was 17, he feared his dreams of obtaining a college degree were dashed. Marshall told senators how he later worked his way back to the university, but now feared a steep hike in tuition could once again cripple his goal.

“That would really just be the end of my days,” he said. “That’s like saying to many students like me whose families experienced hard times, maybe you don’t matter.”

And Chelsey Pounds, a graduate student at UNL, warned the committee that deep cuts would cause the university system “to bleed to death.” She said cuts to the university would force more students to look at other options outside of Nebraska, potentially harming the state’s economy in the future.

Others at Wednesday’s hearing also asked senators to consider the harm budget cuts could do to the university outside the classroom in areas such as extension, research and health care.

Schafer told the committee the Board of Regents “would leave no stone unturned” when it came to closing programs and offices across NU, including scaling back the operations of Nebraska Extension and the Nebraska College of Technical Agriculture in Curtis.

In an emotional statement to the committee, Ashli Brehm described how doctors at the University of Nebraska Medical Center diagnosed her with breast cancer at 33, and how all throughout her treatment, she watched as the Fred & Pamela Buffett Cancer Center was being built.

“For me, it felt like hope was being physically built from the ground to the sky,” she said. “Seeing that building going up, I thought ‘What an incredible time to be in Nebraska.’

“Why on earth would we make a decision to back away from that?” asked the Elkhorn mother of three. “I’m concerned that if funds are cut this year, then what is to stop this from happening year over year? And then suddenly, we have a beautiful facility depleted of the life-altering research that was the impetus for a cancer center in the first place.”

Senators took no action Wednesday as they await a new report on the state's fiscal condition from the state's Economic Forecasting Advisory Board on Feb. 28. A final recommendation from the committee might not hit the floor of the Legislature until March.

No one testified in support of the cuts Wednesday, while students indicated they will remain engaged in the process moving forward.

Jewel Rodgers, another UNL student, reminded the committee that as it scours every budget line, there are human lives behind the numbers.

“I understand these decisions are hard, but I urge you to remember you are dealing with human beings,” she said. “Put human lives before the dollar sign.”

University of Nebraska administrators announced $9.2 million in potential cuts across NU’s four campuses Monday, a forerunner to a major heari…

UNL students respond to budget cut proposals: 'Like a punch to the gut'

Under its 1869 charter, the University of Nebraska described itself as a place for Nebraskans to gain “a rough knowledge of the various branch…

Here's a look at the first $9.21 million in cuts the University of Nebraska is planning to address a $36 million gap in state appropriations.

A proposal to sharply increase Nebraska's cigarette tax would raise an estimated $93.6 million in annual revenue at a time when the state face…

Legislature Day 28: Senators not sold on sovereignty — yet

The deadline for incumbents to file for office came and went, and no name appeared on the list of candidates for the Legislature in District 38.

Pillen, Schafer seeking another term on NU regents' board

Two sitting members of the University of Nebraska Board of Regents recently filed for re-election to the eight-person body.

People with certain types of recurring blood cancers now can receive a new form a treatment at Nebraska Medicine in Omaha.

The Legislature's Appropriations Committee, after hours of negotiation and discussion, will recommend that the University of Nebraska, and sta…

NU adapting after slashing mileage rate in half

Marge Spencer retired as a principal from North Platte Public Schools, but like many teachers and administrators, never left education.

University of Nebraska President Hank Bounds testifies before the Legislature's Appropriations Committee in 2018.

State Sen. Adam Morfeld of Lincoln speaks with students, other NU supporters and media on the north side of the Capitol before leading the group inside to attend the university budget hearing Wednesday.

Students, university officials and others pack the first-floor hearing room Wednesday at the Capitol for the Appropriations Committee hearing on the NU budget.

Students and other University of Nebraska supporters gather outside the state Capitol in advance of a hearing on the university budget earlier this month.