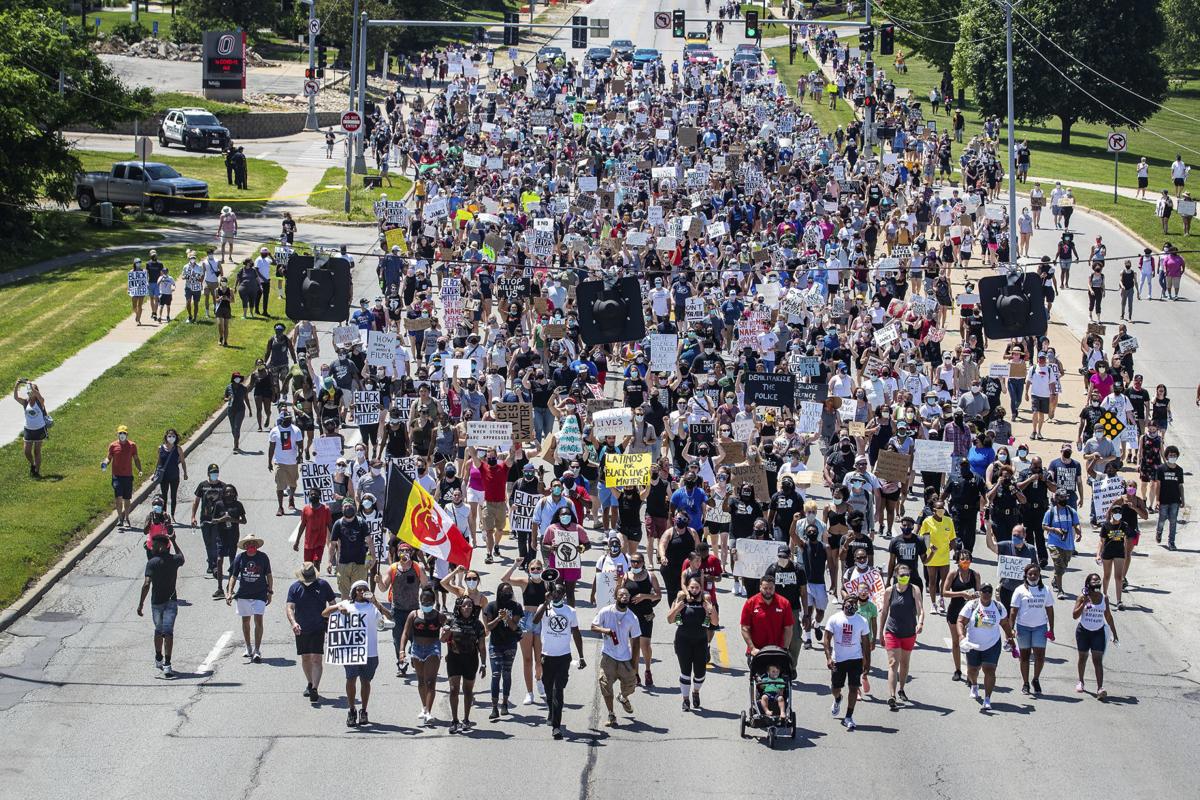 Marchers walk along a street during a rally to remember James Scurlock on Sunday in Omaha. Scurlock was fatally shot by a white bar owner during an Omaha protest over George Floyd's death. 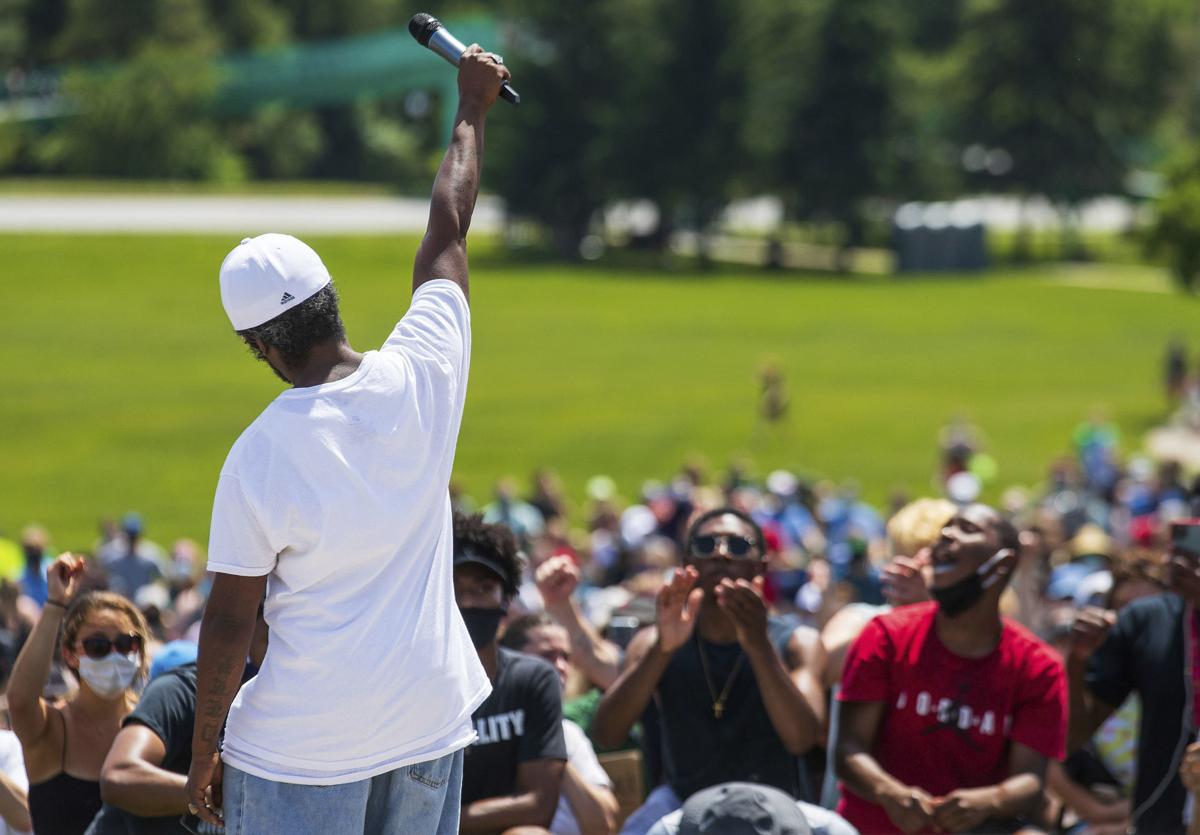 James Scurlock II salutes the crowd during a solidarity rally Sunday, June 7, 2020, at Memorial Park in Omaha. His son, also named James Scurlock, was fatally shot by a white bar owner during an Omaha protest over George Floyd's death.

A young woman came to the Scott Conference Center in Omaha on Monday to tell the Legislature's Judiciary Committee she is angry, sad and tired, but will not give up hope on the effort for equity and justice for black Nebraskans.

"I came here today because I have faith that change will happen in my community and in this nation," said Elexis Martinez. "These past two weeks have strengthened the power in me to be heard, felt and understood."

It was a day for the community to speak to lawmakers about policing, misconduct and racial injustice in Nebraska. Community members told them they wanted to see less money spent on policing, more law enforcement training in de-escalation techniques, decriminalization of marijuana, establishment of citizen committees with actual power, and the demilitarizing of law enforcement.

It was passionate and disturbing testimony for the senators to hear.

A cousin of Jake Gardner — who shot and killed James Scurlock, a black man, a week ago in Omaha — came to tell them about the depth of grief that comes with knowing someone in your family has the capacity to do what he did.

The eight legislators, led by Judiciary Chairman Steve Lathrop of Omaha, listened to the experiences, concerns and ideas for change.

Mia Crawford-Gray told them the answers are out there, but not the will to implement solutions, she said.

A number of those testifying had been to the protests in Omaha and Lincoln and saw police lobbing tear gas canisters at peaceful demonstrators and shooting at them with rubber bullets.

The Rev. Darrell Goodwin, associate minister of the United Church of Christ, said to the committee: "Good people, I want to be able to do my job."

Last year when he first arrived in Omaha he was pulled over three times by Omaha police and the State Patrol and given a warning for "driving while black." No other reasons, he said.

At the protests a week ago, trying to minister to people in the gap between protesters and police, he was invited to help with de-escalation. But soon after the 8 p.m. curfew, police fired pepper balls and tear gas at him and others around him when they were trying to exit in the way police told them to go.

"I stood in the wake and watched an Omaha police person shoot a young person in the back with pepper balls seven times," Goodwin said. "You cannot tell me that that was 'in there doing their job.'"

He could not even pray for people as a black person in the state of Nebraska without being afraid of being shot at or peppered, even though the police escorted him "safely in," he said.

"I'm demanding that as a black man in Nebraska I'm able to do my damn job," he said.

A number of people spoke of changes to funding of police departments.

"Defunding the police is inaccurate phrasing," said Lee Hazer. "Let's reallocate funding so police don't have to be all things to all people. Let's help the police respect, refund and restore our community of north Omaha and truly become Omaha Strong."

Legends among Lincoln civil rights activists stood up for justice

"I'm talking to Don Kleine and Todd Schmaderer. If Mr. Gardner was a black man who killed someone with an invalid weapon, he would have been shot and killed on site," Liu-Sang said.

Gardner, who had an expired concealed carry permit, could still face misdemeanor charges or citations, officials have said. Kleine, who initially declined to charge the white bar owner later turned over the case to a special prosecutor for a grand jury review.

Jenny Heineman, who has a doctorate in sociology, said she is a cousin of Gardner and encouraged all the white people there to ponder their own family beliefs.

"Let me tell you what you don't want," she said. "You don't want to be sleepless and disturbed in the ways that I am today."

Every time she tries to sleep, she can only think of James Scurlock's little girl, close in age to her own child. And she spends all her waking hours knowing her family did this.

Many of those testifying asked the committee for these actions:

* De-escalation training for all police officers.

* Bans on chokeholds and strongholds by police.

* Decriminalization of marijuana, which can be used as an excuse to pull over black people, even when it is not present.

* Restoration of voting rights for felons after their sentences are served.

* Requirement for diversity in all jury panels.

* To strip power from police unions.

Sen. Ernie Chambers stood up near the end of Monday's forum, saying if he didn't speak he would burst.

"I am fed up with all of this sanctimoniousness by these police, and especially their union, which is like the mafia," Chambers said.

"Those who make peaceful evolution impossible will make armed revolution inevitable," he said, changing slightly a quote from John F. Kennedy. "You shoot unarmed people. How will you do when armed people come at you?"

Lincoln Sen. Patty Pansing Brooks said it was important to hear the voices of people who are appropriately angry and frustrated.

Things can be done at all levels of government, and the state needs to do its part in rethinking how it encourages and uses police, she said.

The last to testify was an 8-year-old white girl.

"I know you're tired, but I'm tired of black people not being treated right," said Eleanora Marinkovich.

Her brother is black and treated unfairly, she said. And she hears that senators can make laws to make the world a better place for him to live.

"I do not know what those laws are," she said, "but what I've learned in school (is) if something goes wrong, you fix it. ... So please do what's right, so my brother can run outside, dressed how he wants to, and have the same opportunity as me."

Nebraska Attorney General Doug Peterson said allowing an entire class of inmates to participate in the suit would have dramatically increased the cost of the litigation.

City called on to defund Lincoln police, hold itself liable for protester injuries

Residents expressed disgust at what they described as brutal and excessive force used by law enforcement.

After more than 16 hours of listening, some members of the Legislature's Judiciary Committee said Tuesday they have more understanding of what…

Sister: Please fix the world for my black brother

Eleanora wants her brother Leo to be able to wear his athletic hoodies, and play Nerf guns with his friends, without her parents fearing for his safety. She testified last week before senators.

The Nebraska Justice initiative sent a long list of reforms Monday to state senators for them to consider.

Prosecutors in Omaha have agreed to drop misdemeanor charges against scores of people who were arrested for violating a curfew during protests two weeks ago.

Protests Saturday and Sunday at 11-Worth Cafe near downtown Omaha drew police. A “closed” sign was hung inside the door on Monday.

Omaha bar owner Jake Gardner has been indicted on four counts, including manslaughter, in connection to the shooting death of James Scurlock during protests May 30.

Warrant to be issued for Jake Gardner, Omaha bar owner charged in death of James Scurlock

A grand jury on Tuesday charged Jake Gardner, 38, with four felonies: manslaughter, attempted first-degree assault, making terroristic threats and use of a weapon to commit a felony. If convicted, he could face up to 95 years in prison.

Marchers walk along a street during a rally to remember James Scurlock on Sunday in Omaha. Scurlock was fatally shot by a white bar owner during an Omaha protest over George Floyd's death.

James Scurlock II salutes the crowd during a solidarity rally Sunday, June 7, 2020, at Memorial Park in Omaha. His son, also named James Scurlock, was fatally shot by a white bar owner during an Omaha protest over George Floyd's death.