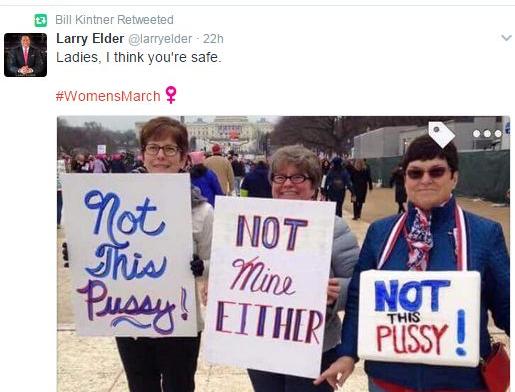 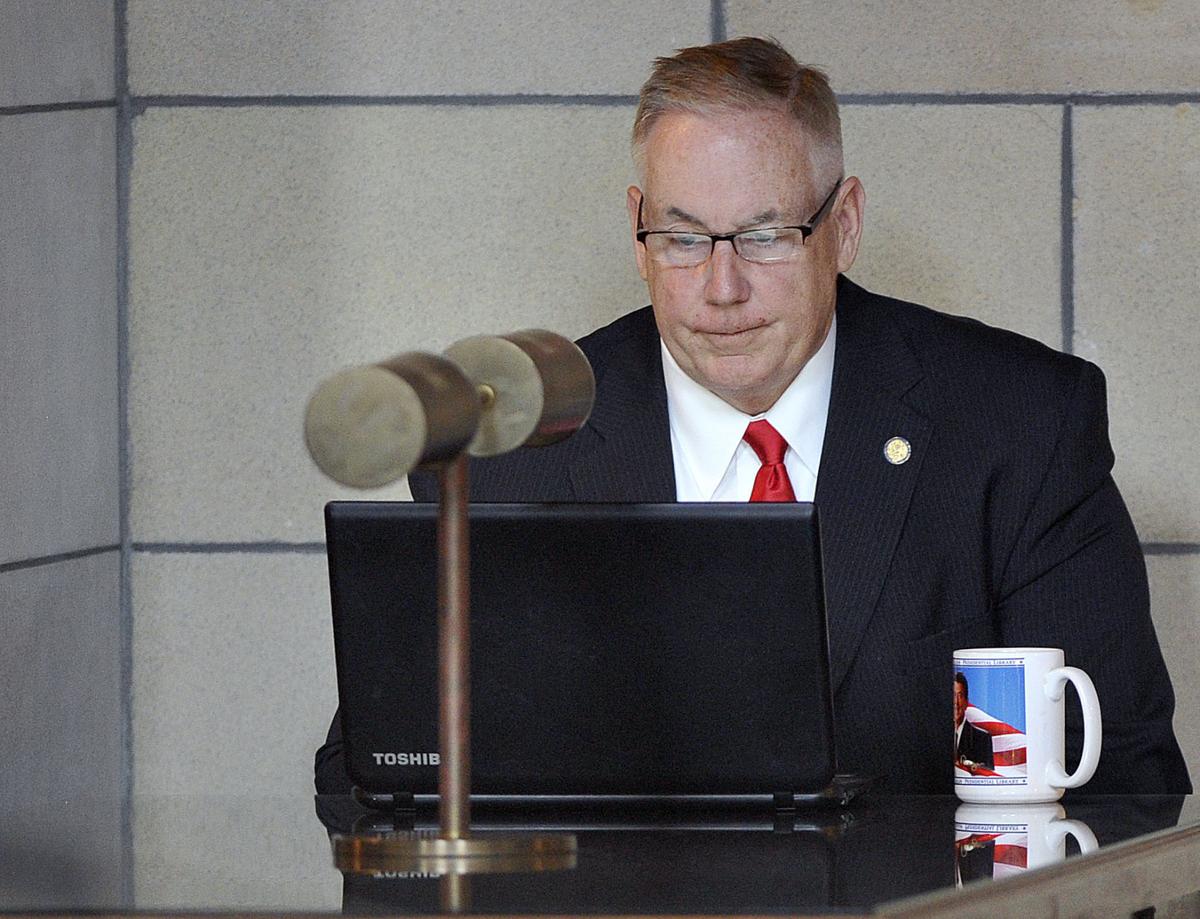 Sen. Bill Kintner works on his laptop Monday morning from a spot under the south balcony in the Capitol.

Bill Kintner, who was fined last year for using his state-owned laptop for cybersex with a stranger, is now under fire for an offensive tweet aimed at Saturday's Women's March.

Kintner, of Papillion, is a member of the state Legislature and eligible for re-election in 2018.

Late Sunday, he retweeted a comment by a California radio host who mocked three women pictured with signs protesting Donald Trump's hot mic moment from 2005, in which the now-president of the United States joked about grabbing women "by the p---y."

The women were among millions who took part in marches over the weekend to promote unity and equal rights for all regardless of gender, race or religion in the wake of Trump's Friday inauguration.

"(F)rom a victim in NE, sexual harassment and assault aren't a joke. I hope no women near you ever experiences either," one person responded to the tweet.

Kintner replied, "I hope no women experiences harassment or assault either."

Kintner blamed political opponents for the outrage the tweet inspired, replying to one critic before deleting his account: "Right out of the liberal playbook, take a joke & claim victimhood."

Caught in a Capitol hallway by reporters, Kintner refused to respond to questions, repeatedly saying "Give me an hour," and "Go do research." An hour later he declined to comment. When a Journal Star reporter refused to talk to him about the situation off the record, he said, "Go look at who's doing it" — a reference to those who criticized him for the tweet.

"By retweeting a message, I was not implying support for putting women in fear of their personal safety," he said in an emailed statement from his office.

Fellow senators who have opposed Kintner seized on the tweet during legislative debate on an unrelated bill, citing it as further reason he should be removed from office.

"He has no integrity, no respect for women, including his family," said Omaha Sen. Ernie Chambers.

Chambers also lauded those who took part in the Women's March: "See that power that you had — that was something unleashed like never before."

Two other senators, Bob Krist of Omaha and Matt Hansen of Lincoln, joined in condemning Kintner.

Krist, who led an effort to oust Kintner after the cybersex scandal erupted, said debate over his behavior has distracted the Legislature enough that an attempt to unseat Kintner should come within the next two weeks, if not sooner. Krist added that he would prefer to wait until lawmakers adopt permanent internal rules for debate.

Kintner describes himself as a conservative Republican. However, Republican groups from his district joined Gov. Pete Ricketts and many Republican lawmakers in urging Kintner to resign from office in response to his cybersex scandal last year.

Kintner, whose wife is Ricketts' chief policy adviser, was fined $1,000 last year by the Nebraska Accountability and Disclosure Commission for using his state-owned laptop to have cybersex with a stranger, who then tried to extort money from him.

Ricketts said Monday that he hadn't seen the recent retweet, but that he still believes Kintner should resign.

A Facebook group launched by supporters of former Democratic presidential hopeful Bernie Sanders encouraged people to rally outside the state Capitol to "end rape culture" in response to Kintner's "comments that he retweeted implying these women are too ugly to rape."

As of midday, more than 1,000 people had expressed interest in the Feb. 2 rally on Facebook.

Don't call it a line in the sand, Ernie Chambers says.

An 18-year-old is in jail after police say he beat an 83-year-old man early Monday.

Cindy Lange-Kubick: Nothing funny in tweet about sexual assault

On Twitter this weekend, a Nebraska state senator found humor in a tweet making light of sexual assault.

A western Nebraska man is in trouble after using an explosive rifle target to announce the gender of his baby over the weekend.

UNL's Title IX office to investigate statements made to marchers

It was one repugnant act too many by Bill Kintner.

Kintner resigns over offensive tweet; says it's not about 'doing what's right'

Months after a cybersex scandal first threatened to end his legislative career, and after years of complaints about his behavior in office, Bi…

'This is not an issue to be joked about': Lawmakers highlight bills to protect sex assault victims

In Kintner case, freshman Sen. Geist stepped forward before it was safe

Freshman Sen. Suzanne Geist of Lincoln had not planned to speak at all.

Sen. Bill Kintner works on his laptop Monday morning from a spot under the south balcony in the Capitol.