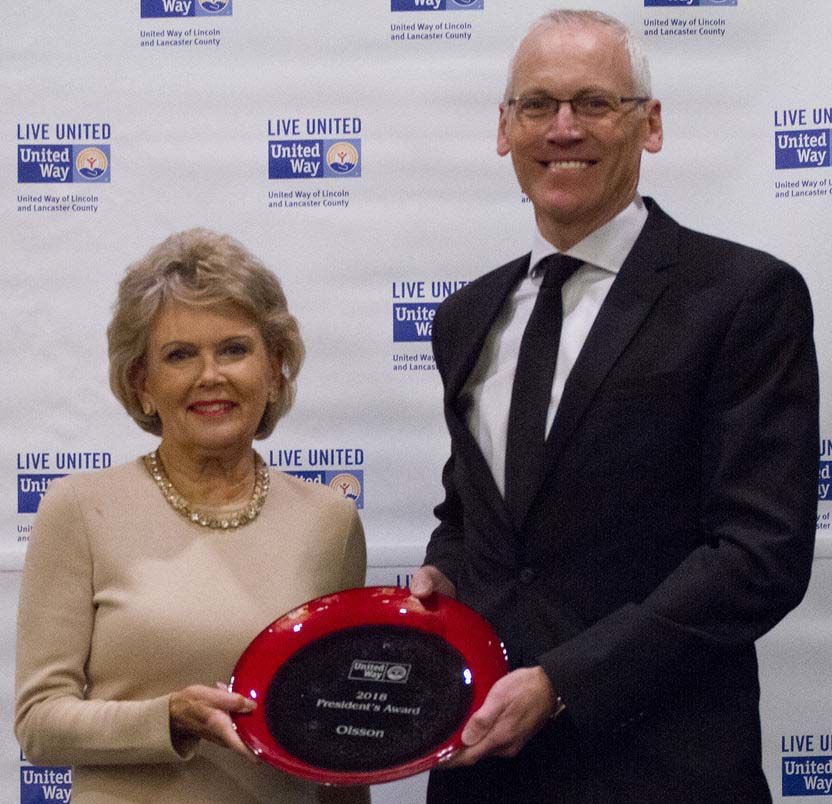 Linda Robinson Rutz, community volunteer and president of the United Way board of directors, presents the President's Award to Brian Chaffin, regional leader for Olsson. 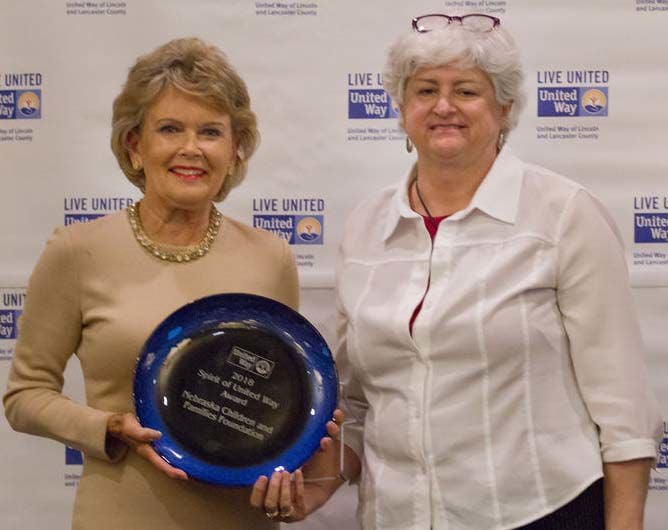 Each year, 63 agencies that help those in need in Lincoln receive support from the United Way/Community Health Charities fundraising campaign. Hundreds of volunteers were involved last year in the annual campaign that started in 1923, and many were in the Lincoln Cornhusker Marriott Hotel ballroom April 29 to hear that their efforts had raised $6.7 million to help meet basic needs in three focus areas -- health, income and education.

Linda Robinson Rutz, community volunteer and president of the United Way board of directors, stood in for Jim Barone of Ameritas, who chaired the 2018 campaign. She recognized leaders in the campaign such as Pacesetters that kicked off the campaign last summer and increased their giving over 5%.

Tocqueville members, who give $10,000 annually, added 11 new members and represented over 14% of the total campaign. Thirty-two new businesses contributed to the 2018 campaign, and agencies that are supported by United Way increased their own giving by 12%. More than 400 companies and organizations overall were involved in the effort.

Among the organizations that received special recognition was Nebraska Children and Families Foundation, which was honored with the Spirit of United Way award for working to bring together agencies that strengthen families in Nebraska, and specifically their work with United Way of Lincoln and Lancaster County. Betty Medinger, senior vice president, accepted the award.

“We believe in investing early before problems start and using data rather than assumptions to help things move in the right direction,” Medinger said.

“Our engineers want to be part of something big, whether it’s in their work or in the community," Chaffin said. "When we see the impact of United Way projects that directly affect our community, we know it’s a good fit with Olsson.”

Nelnet garnered top honors among companies for both funds raised and volunteer hours contributed. Gastroenterology Specialties and Lincoln Endoscopy Center was recognized as a new partner. Rhonda Saunders of Nebraska Hospice and Palliative Care, and Heather Loughman of Community Action Partnership of Lancaster and Saunders Counties, were chosen as agency speakers of the year.

Rutz closed the program by noting that there were significant challenges to produce a successful campaign in 2018. The obstacles were overcome by people like those in the room who care, she said. “You take the time to give back to the community, and that benefits us all. Thank you.”

To learn more about United Way or to volunteer, go to unitedwaylincoln.org.

When the COVID-19 crisis hit in mid-March, friends requested masks for local agencies. Quantities requested were more than could easily be mad…

It started with a $500 humanitarian project to purchase two sinks for a pediatric ward at a Zambian hospital.

Lutheran Family Services has received a $3 million gift to establish the Coyner and Donna Smith Diversity Scholarship Fund. The fund will help…

Kiwanians donate to The Market and Head Start

The Capital City Kiwanis Club hosted a virtual shower in September for infants, toddlers and pre-school children served by The Market and Head Start.

Nebraska's young change-makers have until Nov. 10 to apply for scholarships, grants and more through The Prudential Spirit of Community Awards.

Donations to Gathering Place to be matched dollar for dollar

Home. We’ve spent more time there than usual over the past year. It’s where we’ve worked, learned and taught. Soon, it will be where we spend …

Nearly 400 bowls were distributed at the 18th annual Empty Bowls to Go event Sept. 30 at the Food Bank of Lincoln.

Linda Robinson Rutz, community volunteer and president of the United Way board of directors, presents the President's Award to Brian Chaffin, regional leader for Olsson.