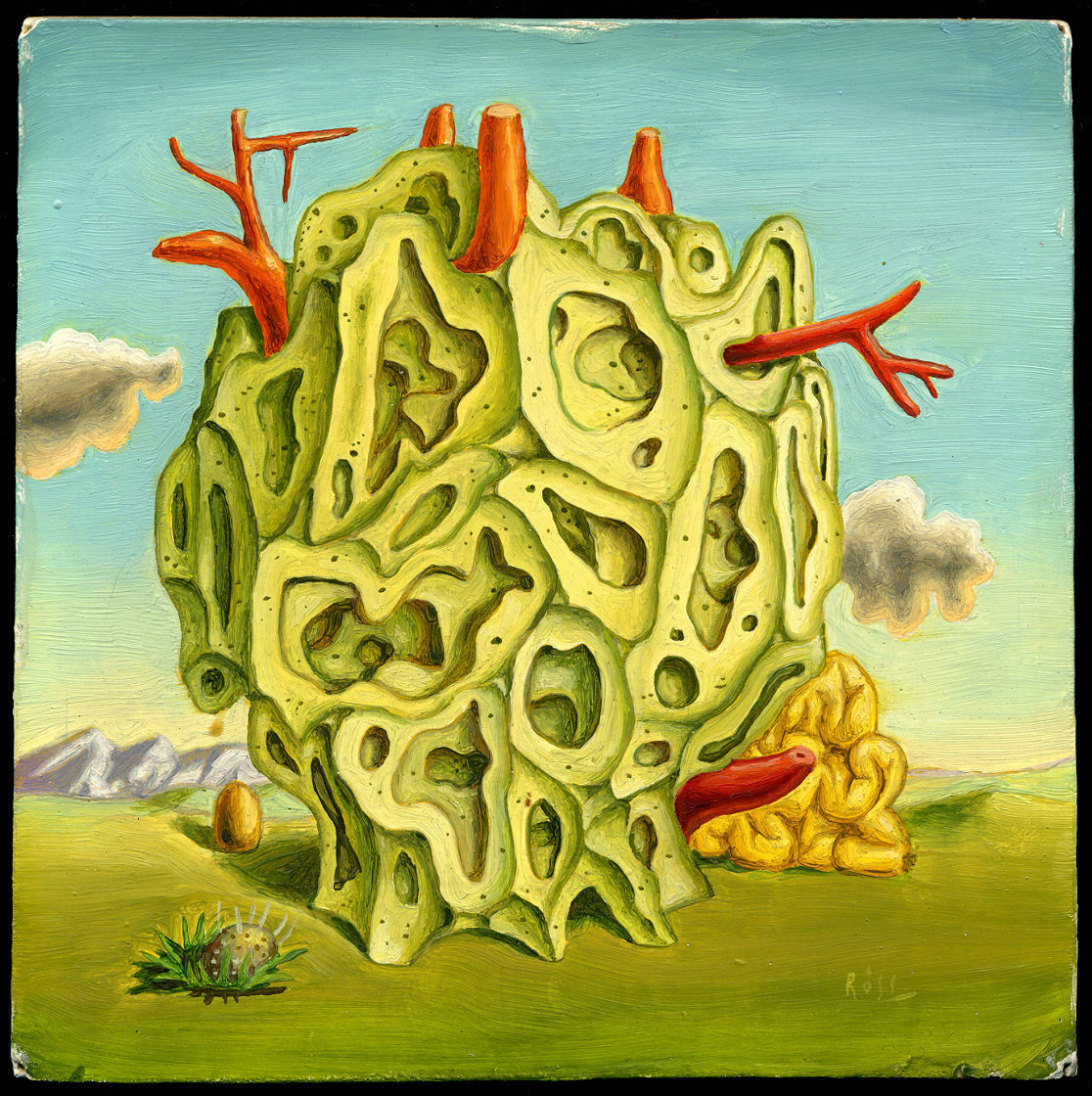 This untitled 1986 piece is the oldest work in "Other Drawings," the Fiendish Plots exhibition of Alexander Ross. 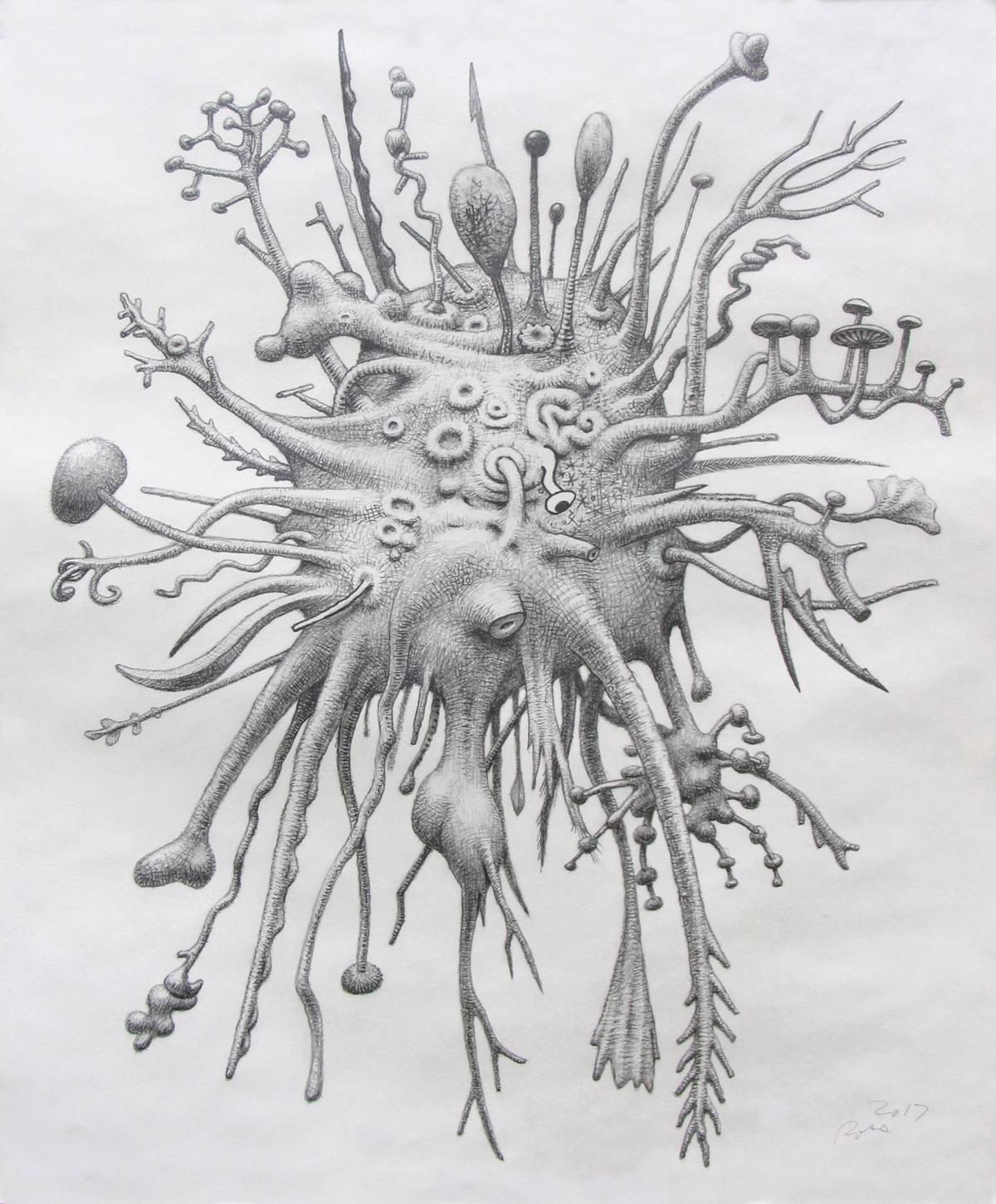 "Branchanelle" is a 2017 graphite drawing by Alexander Ross now on view at Fiendish Plots.

Alexander Ross is an acclaimed painter, whose brightly colored biomorphic pieces have, over the last three decades, been shown at the Whitney Museum of American Art -- along with those of fellow travelers Matthew Richey and Carroll Dunham -- and other museums across the country including some prestigious New York galleries.

The Massachusetts artist’s Fiendish Plots show, however, is titled “Other Drawings” and doesn’t include a single painting -- even though some were shipped to Lincoln.

The drawing-only decision was made in keeping with the spirit and the intent of the artist-run Lincoln gallery’s exhibition philosophy.

“We encourage artists to use this as a laboratory -- do something you would not do for the market, for your gallery,” said Fiendish Plot’s Nancy Friedemann-Sanchez. “He ran with it. He’s never done this kind of show. In the end he was really happy about it.”

As well he should have been.

“Other Drawings,” which includes work from 1986 to last year, is a revelatory exhibition of a mark maker, an artist who has great talent for and skill at drawing, whether he’s using it to prepare for paintings and digital collages or simply to work out an idea, shape or form.

Most of those forms are organic -- be they close-up depictions of garlic bulbs or imagined “creatures” with tendrils and cavities that appear to be coming to life or figurative cartoonish pictures that, among other things, reveal an influence of Philip Guston on Ross’s work.

The drawings are meticulously constructed -- one on a piece of graph paper has to have thousands of tiny hash marks, beautifully executed and highly imagined, in their creation of worlds and forms.

Unframed and pinned to the gallery wall, the drawings are perfectly shown -- their rawness, perhaps preliminary in nature and physicality, emphasized by their presentation.

“Other Drawings” is a show that not only is unusual for Lincoln, but is also a new sort of exhibition for Ross anywhere. As such it’s one of the most important exhibitions that will be in Lincoln in 2019.

But it’s also simply a great drawing show, one that could easily hang at New York’s Drawing Center, which is the highest compliment any drawing exhibition can receive. It’s on view for the next two weekends at Fiendish Plots. It shouldn’t be missed.

What: "Other Drawings" by Alexander Ross

Hours: 1 p.m. to 4 p.m. Saturdays and Sundays or by appointment

Lincoln police officer and daughter get another surprise on 'Ellen'

A battered old box spring affixed to the wall, slat side up, bids visitors to Fiendish Plots' exhibition space “welcome.”

This untitled 1986 piece is the oldest work in "Other Drawings," the Fiendish Plots exhibition of Alexander Ross.

"Branchanelle" is a 2017 graphite drawing by Alexander Ross now on view at Fiendish Plots.