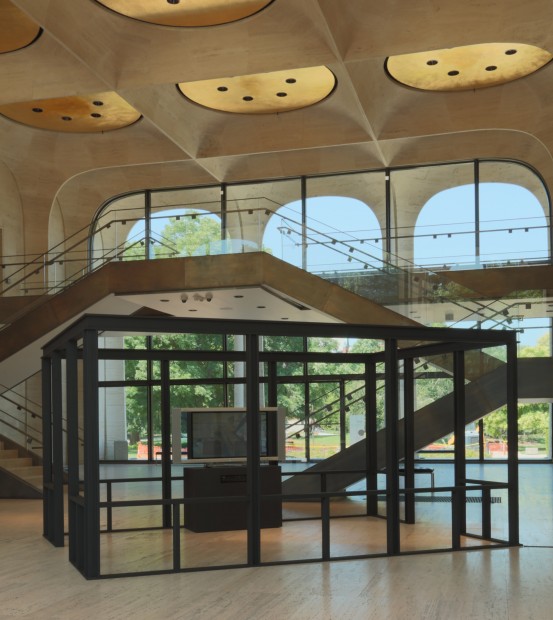 This is a still image from Eamon O’Kane’s video “Retrospective,” showing three museums designed by Philip Johnson. From left are the Munson-Williams-Proctor Arts Institute, Sheldon Museum of Art and Amon Carter Museum of American Art.

Sheldon Museum of Art and Amon Carter Museum of American Art are in this still image from Eamon O’Kane’s video “Retrospective” showing at Sheldon.

Philip Johnson’s Glass House sits behind the Sheldon Museum of Art, which is sandwiched between the Munson Williams Proctor Arts Institute and the Amon Carter Museum of American Art.

In reality, that alignment is an impossibility -- the Glass House is in Connecticut, the arts institute is in Utica, N.Y., the Amon Carter is in Fort Worth and the Sheldon is in Lincoln.

But they exist together in the videos Eamon O’Kane created for Sheldon as part of the 50th anniversary celebration of the Johnson-designed architectural masterpiece.

A nine-minute video, in which views of Sheldon’s Great Hall and the Glass House are layered on each other and reflect one another, is found on a plasma screen inside a minimalistic black wooden structure designed to suggest the Connecticut building. It on view in the Great Hall and appropriately titled “Glass House.”

“Retrospective,” an absorbing 14-minute panoramic video that links the four structures along with other elements from the Glass House grounds, is being shown intermittently in Sheldon’s auditorium.

“Plans,” a 14-minute video that layers Johnson’s architectural plans and images from the Johnson-designed Museum of Modern Art sculpture garden, and “Glass House Sessions,” a three-minute, stop-motion animation of an O’Kane painting of the Glass House, are in the second-floor Focus Gallery.

Born in Belfast, Northern Ireland, O’Kane has long blended architecture into his art, which began as painting, then moved to installations and video. He now lives in Denmark and is Artistic Research Leader at Norway’s Bergen Academy of Art and Design.

At Sheldon for the completion of the videos, installation of “Glass House” and an artist’s talk, O’Kane said his interest in architecture began when he was a child.

“The main thing was growing up in a historical house,” O’Kane said. “It is a Georgian house from 1611. I was always surrounded by landscape and architecture. Both of my parents are artists. I come from an artistic family. I am the eldest of six, and all are artists or curators, except the black sheep -- she studies horses.”

But O’Kane, who thought about studying architecture as well as art, said there’s more to looking at architecture than simply examining the looks and functions of buildings.

“The big thing for me with architecture is I see is that is it is not necessarily more permanent, but there can be more long-lasting consequences of the ideas that architects come up with,” he said. For example, Austrian architect Victor Gruen pioneered the design of indoor shopping malls in the United States -- “He got back to Europe realizing he’d created a Frankenstein.”

O’Kane’s Sheldon commission grew out of a 2012 “Glass House” installation he did in Johnson’s 101 California building in San Francisco. But he has re-edited previously done videos to emphasize Sheldon and was putting together new pieces, via Photoshop and editing, this week.

The galleries are seen with the “Fifty Gifts Fifty Years” show installed. But again, O’Kane has altered things, inserting some of his paintings and pictures of Johnson into the exhibition.

“It’s in keeping with Johnson’s way of working with architecture,” O’Kane said. “He started off as a curator (of architecture at the Museum of Modern Art), having traveled across Europe and seen all the famous buildings and becoming immersed in modernism. He had this huge knowledge. He was bringing together all these things.

The videos are transfixing, whether layering and reflecting images in “Glass House," attaching a Johnson-designed church to the side of Sheldon in “Retrospective” or flashing Monet-like color on the painting of “Glass House Sessions."

They’re also the perfect follow-up to The Naked Museum and provide the most innovative, thought-provoking look yet at the iconic structure that’s rightfully being celebrated this year.

O’Kane’s installation coincides with the exhibition “‘Look for Beauty’: Philip Johnson and Art Museum Design” that examines Johnson’s three museum structures featured in his “Perspective” video -- a pairing that provides some context for the videos but, even with its literalness, diminishes neither their wit, mystery or effectiveness.

Reach L. Kent Wolgamott at 402-473-7244 or kwolgamott@journalstar.com, or follow him @LJSWolgamott.

The museum, which will collect and display traditional folk art — quilts, samplers and weather vanes along with naive expressions in painting, sculpture and ceramics, commercial art and outsider art — won't  open until next year.

What: "Glass House" installation and videos by Eamon O'Kane

This is a still image from Eamon O’Kane’s video “Retrospective,” showing three museums designed by Philip Johnson. From left are the Munson-Williams-Proctor Arts Institute, Sheldon Museum of Art and Amon Carter Museum of American Art.

Sheldon Museum of Art and Amon Carter Museum of American Art are in this still image from Eamon O’Kane’s video “Retrospective” showing at Sheldon.