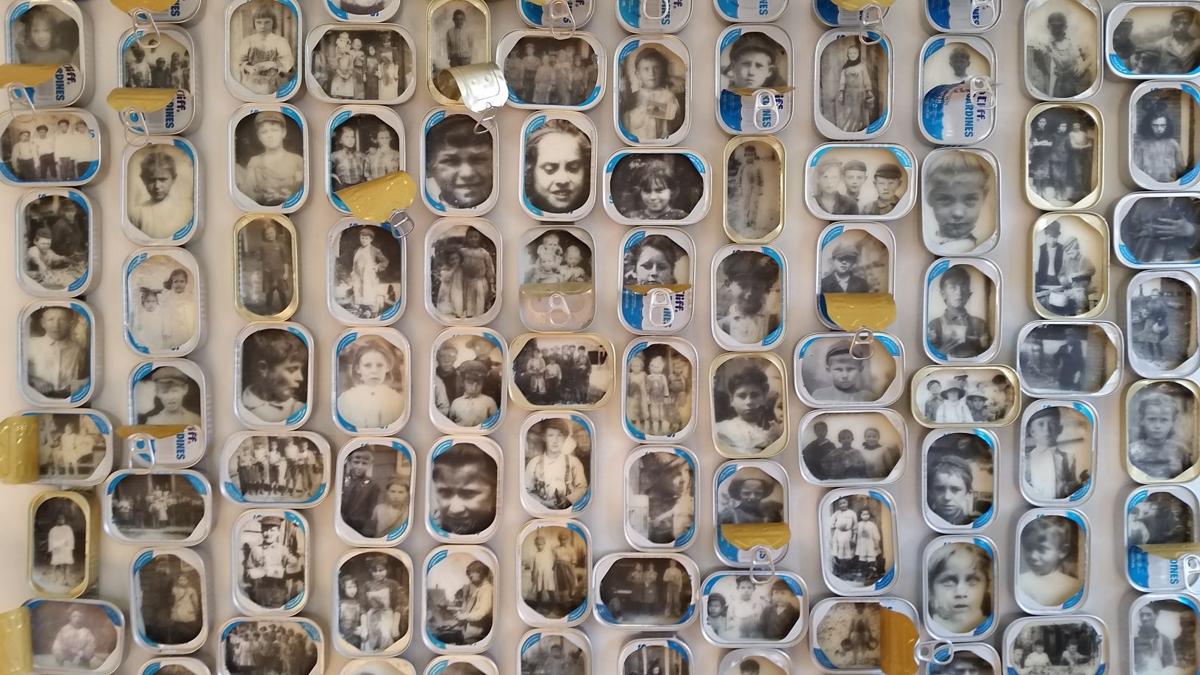 A portion of Tj Templeton's "Youthful Commodity," an assemblage of sardine cans filled with encaustic transferred images of children from a turn-of-the-20th-century sardine factory. 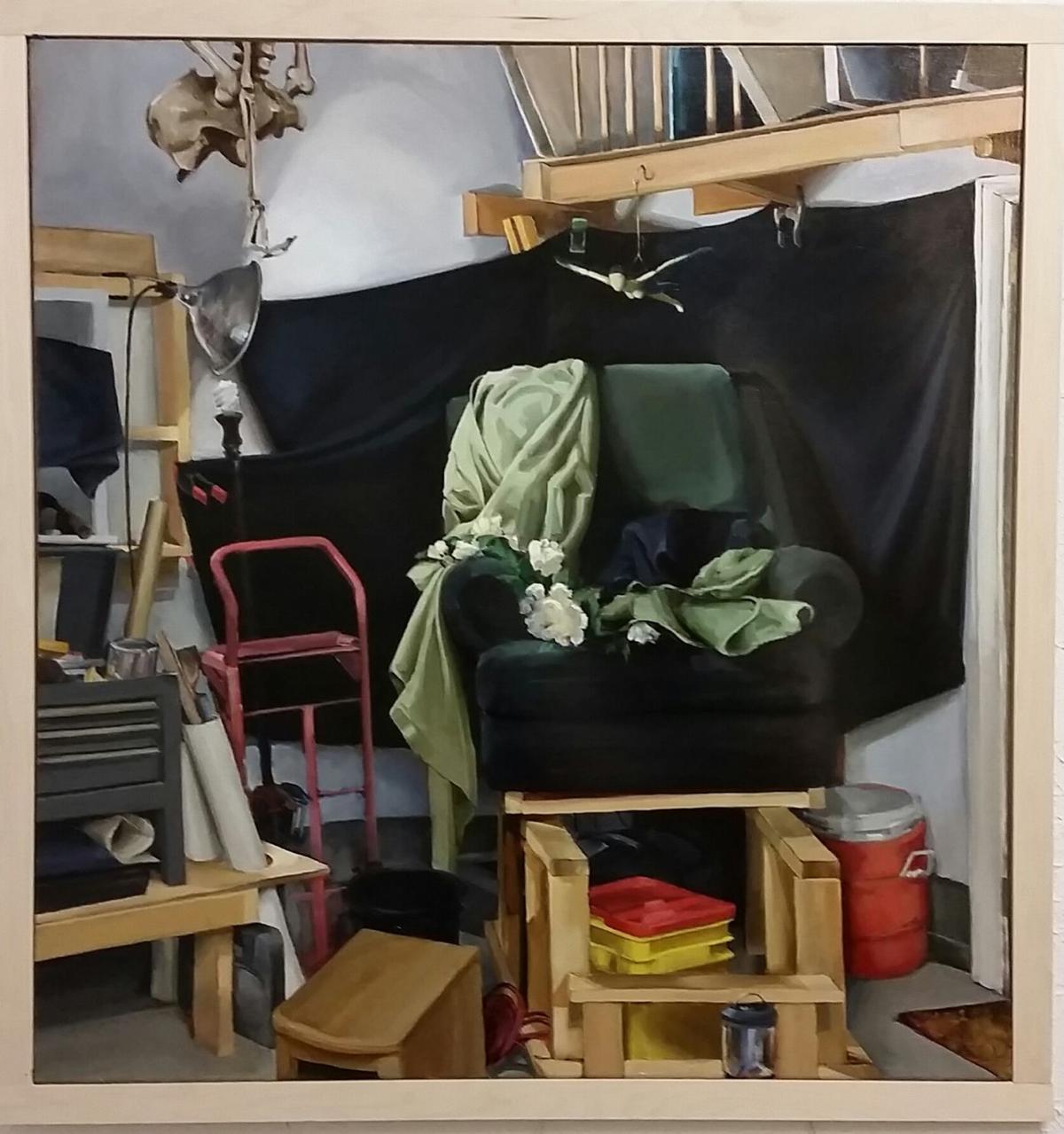 "Jealousy" is a painting of Tj Templeton's studio included in his exhibition "Waxing Candidly and other Observations" at Spatium.

"Paper Flowers" is a painting by Tj Templeton in his Spatium show.

A grid of opened sardine cans, each filled with a photograph of a child embedded in wax, hangs on one of the walls of Spatium.

In another of the Parish Project gallery’s rooms is a giant painting of a girl taken from a selfie.

A third room is filled with campaign signs that frame a slide show of propaganda posters, and in room number 4, there’s a suite of studies of an old Kansas City bridge.

The sardine cans make up “Youthful Commodities,” an exploration of child labor at the turn of the 20th century done via the assemblage of the cans, photographs by Lewis Hine from 1911-15 and encaustic, the wax used to transfer, “print” and contain the photographs.

It took Templeton about three years to master encaustic and come up with a method to get the wax and imagery into the cans, which also appear in a framed triptych. That alone makes the cans worth seeing. But they really connect when the history of the images is revealed.

Hine took the pictures for the National Child Labor Committee, part of the effort to outlaw using children as workers in sweatshops and, in this case, sardine factories. Inside one of the cans, there’s a particularly poignant image of a 5-year-old boy proudly holding the sardine cans he’d produced. That’s right, 5 years old.

On other wall are a few cans titled “Management and Labor,” showing adult overseers with the kids who were entrapped in what was called at the time “child slavery.”

Sadly, Hine’s photographs and Templeton’s provocative presentation of them continue to resonate.

“This (child labor) is still going on,” Templeton said. “It’s just been outsourced. There’s also a well-funded effort to wipe out the progress of the labor movement. It’s probably a good idea to look at where we come from.”

The final piece in the “Childhood Commodities” room is a large, loosely rendered painting of a sardine can that ties directly with the pieces in “Selected Paintings.”

Two of them, also loosely done, are views of a local model, one outdoors in what seems to be rain, the other, sitting inside in front of a dog skeleton.

The most interesting painting, however, is “Kadi as a Sad Puppy,” a blown-up, oil take on the picture of a teenage girl -- a selfie. Part of an ongoing “selfie” series that will eventually result in selfies being painted onto the phones that took them, “Kadi” challenges the nature of the portrait when anyone can take a picture of themselves.

There’s also a tightly composed piece, titled “Jealousy,” that’s a view of Templeton’s studio -- a classic painting subject. In it is everything from a cooler and space heater to a lamp, a dolly and paintings in storage.

“Jealousy” hangs near the doorway next to “The lost decade: From retro-political culture jamming to performance art.”

That’s the room lined with campaign signs with a slideshow of images Templeton created in the early 2000s running on one of the wall.

Based on World War II and Cold War propaganda posters, the graphic images are recast to critique the Bush administration, the war in Iraq, Halliburton and other contractors and the Republican party and its efforts to destroy the labor movement, curtail women’s rights and cut taxes for the rich.

The images -- hundreds of them -- originally appeared on a news aggregator website Templeton launched “in response to the appointment of our 43rd President by the Supreme Court” to protest the neoconservative agenda Bush implemented.

The campaign signs are artifacts from the “performance art” aspect of the exhibition.

“My greatest performance art ever was running as a liberal, progressive Democrat in one of the most right-wing districts in the country,” Templeton said. That was in northwest Iowa. He lost. “I learned a lot. I got death threats, there were bottles broken in my driveway. People tried to intimidate me every day.”

The photographs of the A.S.B. Bridge in Kansas City and the 1899 blueprints for its construction were captured in encaustic and hang together -- in a collage that spaces the blueprints along the bridge and in separate examples of bridge parts and blueprints.

Completing the exhibition’s circle, so to speak, the photograph of the bridge is from in 1911, the year the vast majority of Hine’s pictures of the child workers were taken.

Each of the four rooms could have been an exhibition in itself. Together, that quartet illustrates the versatility, technical expertise and message-making of Templeton, who has for the second straight year delivered one of Lincoln’s best shows.

What: "Waxing Candidly and other Observations" by Tj Templeton

A portion of Tj Templeton's "Youthful Commodity," an assemblage of sardine cans filled with encaustic transferred images of children from a turn-of-the-20th-century sardine factory.

"Jealousy" is a painting of Tj Templeton's studio included in his exhibition "Waxing Candidly and other Observations" at Spatium.

"Paper Flowers" is a painting by Tj Templeton in his Spatium show.