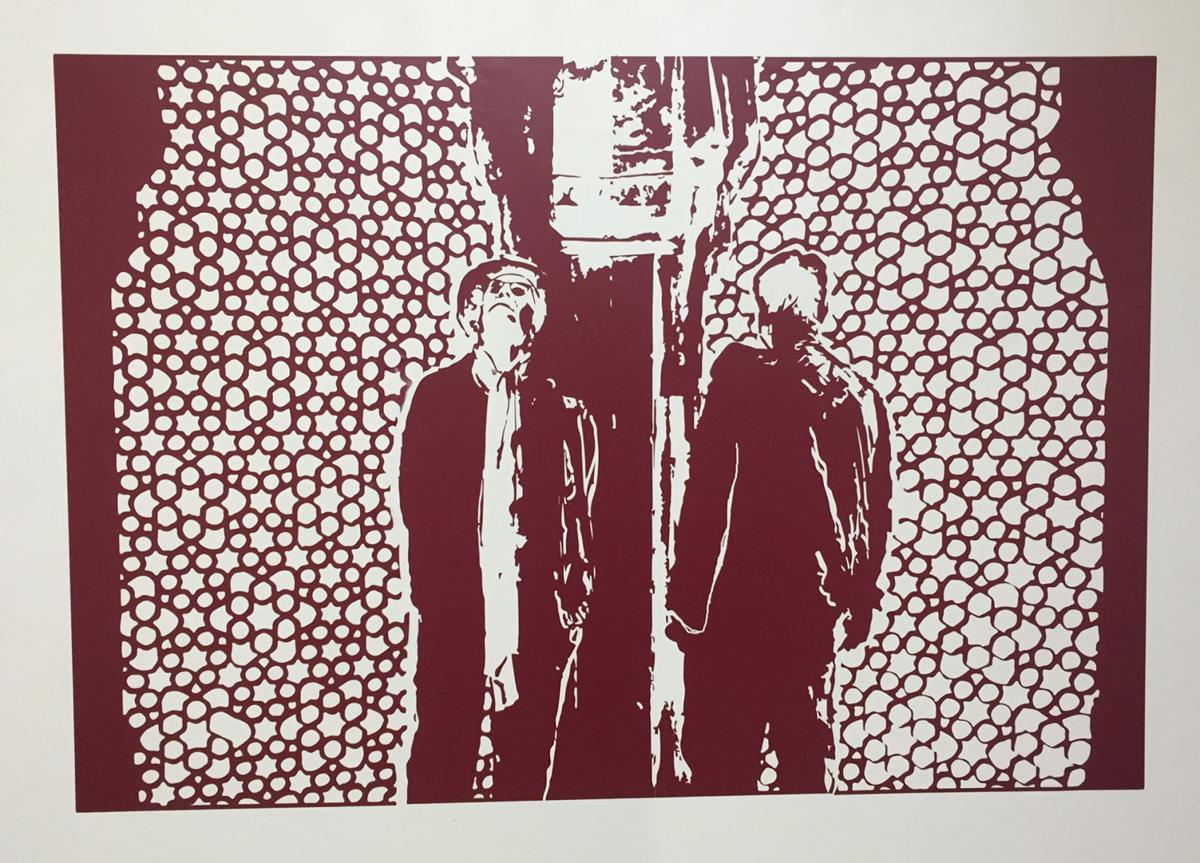 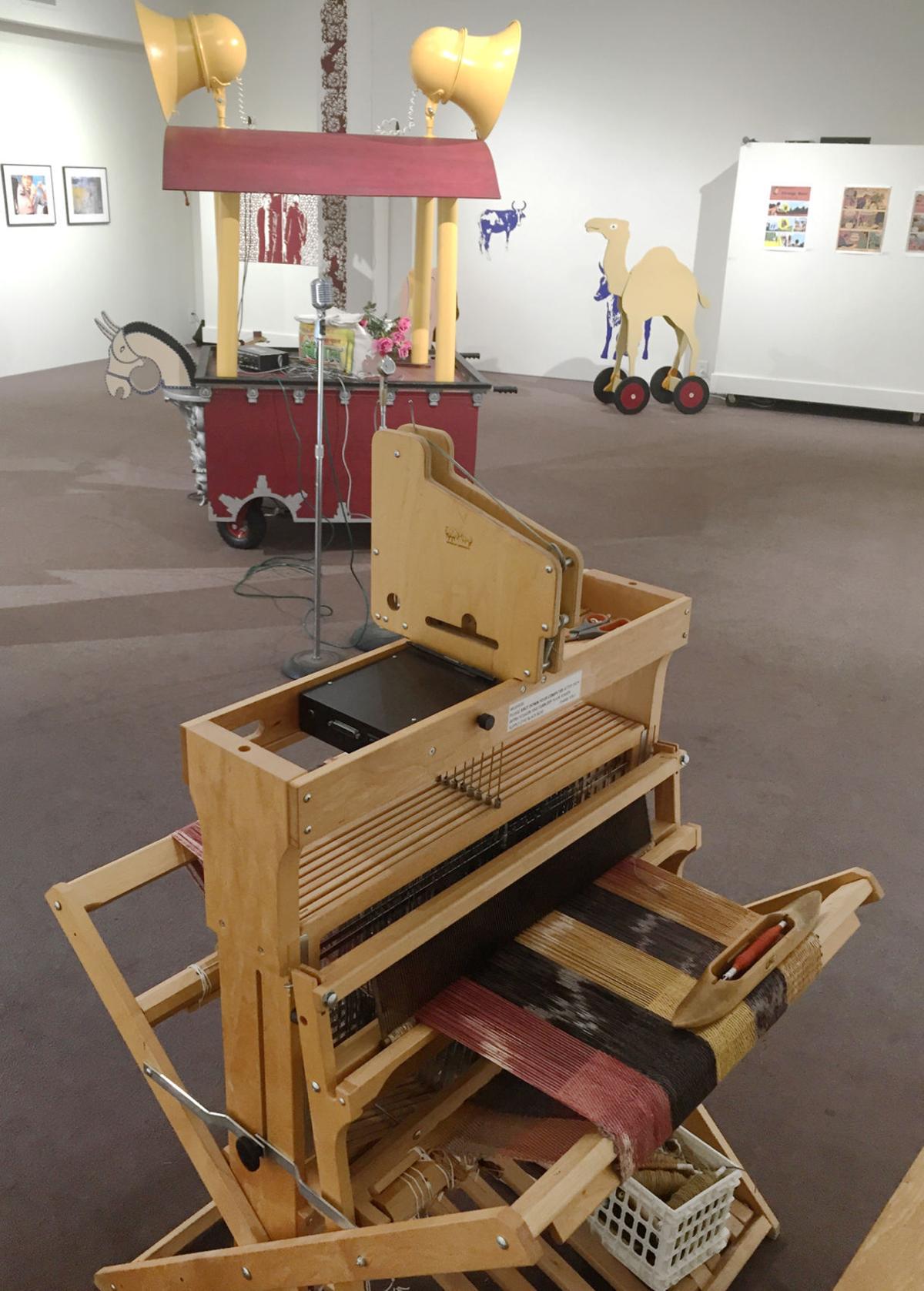 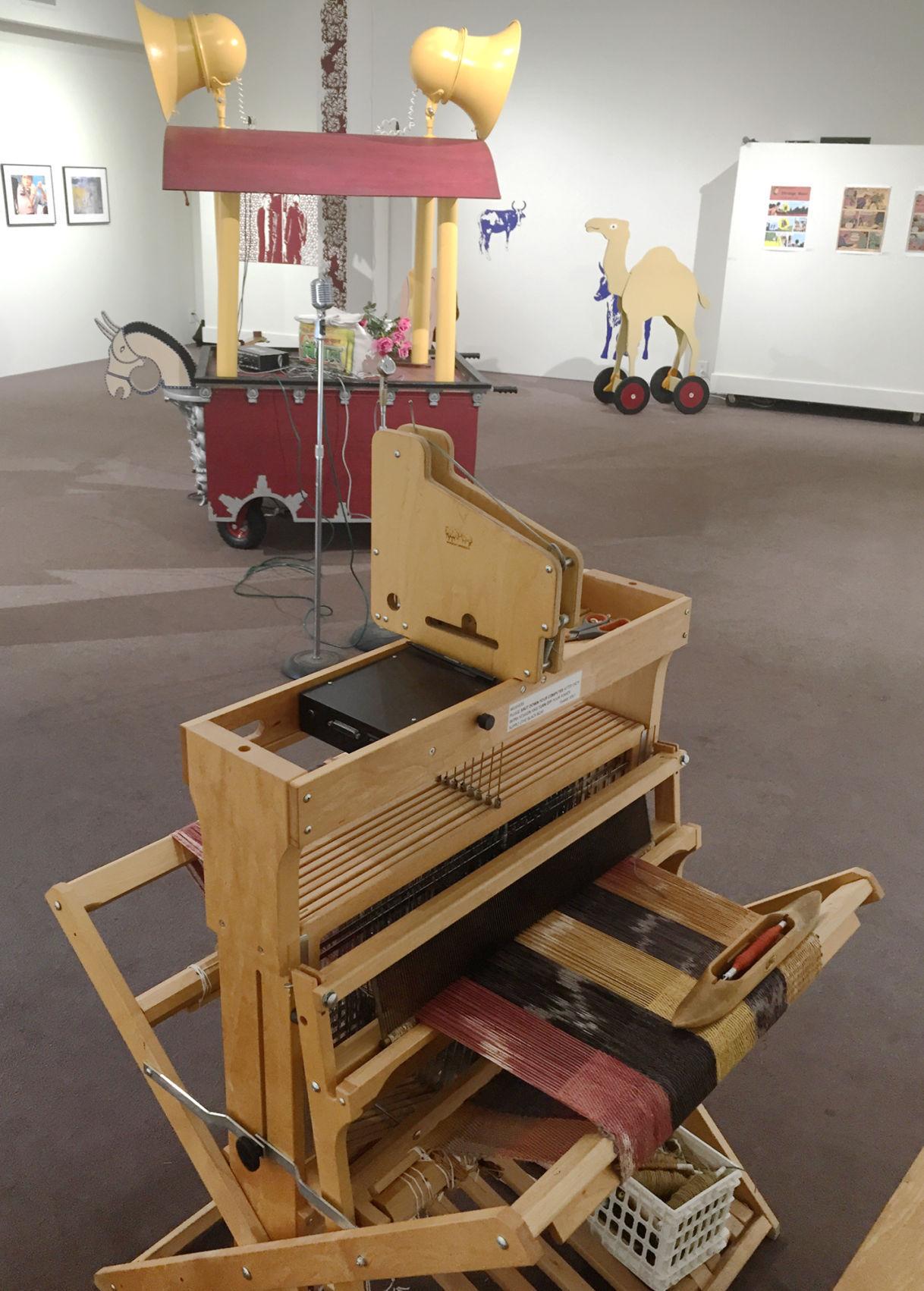 Over the past few years, artists Jay Kreimer and Wendy Weiss have spent much of their time living and working in India as long-term residents rather than tourists.

Now back in Lincoln, the duo have created an immersive installation at the Lux Center for the Arts in response largely to their 2014-15 experience in India, titled “They Gave Us Directions.”

“Life takes place in the street in India with music, food and celebrations unfolding in public spaces in surprising and effective ways,” the couple wrote in their artists’ statement. “As long term residents, we were in search of one thing, as we asked for directions, we found another thing. This exhibition provides a sense of the competing energies on the street that vie for attention.”

Anchoring the installation in the gallery’s center is a vendor’s cart topped with horned loud speakers that play music from India’s street wedding bands, largely unheard music that Kreimer traveled to document. Attached to the cart is a stringed instrument created by sound artist/inventor Kreimer that visitors can strum, its eight-string sound overtaking the recorded music.

Surrounding the cart, which sets the tone for the kaleidoscopic installation are photographs, paintings, vinyl cuts, altered comic strips and a pair of wooden sculptures on wheels.

On the gallery’s north wall is a suite of 24 photographs arranged in a grid that literally give the show its title:

“When we took excursions outside of Baroda, our favorite driver, Shambu, had a gift for being lost,” they wrote. “He frequently stopped to ask for directions. Jay, always ready with his camera, captured the gesticulations of the providers of the next direction.”

Seen together, the vendors, motorcyclists and street people captured by Kreimer talking, often with their hands in motion create a vibrant sense of the streets of a city teeming with life.

Across the gallery is another set of photos that are as static as the “They Gave Us Directions” pictures are alive. But the images of “Tattered Walls” are illuminating and captivating in the own right with abstract patterns and photo collages created by the ripping up of posters.

On the gallery’s east wall is a grouping of street paintings the duo commissioned. Done in sets of three, there are pieces that depict the shoulder of a woman’s brightly colored sari and jewelry titled “Flowers and Jewels,” and trios descriptively titled “Bat,” “Floating Head” and “Demons.”

Opposite those pieces are a trio of “Scrambled Mandrake” comics that are revisionist takes on the comics and some of the vinyl cuts created by Weiss and pasted to the galleries walls and pillars.

“The vinyl cuts by Wendy come from a variety of sources,” they wrote. “ Cows are an omnipresent part of life in India. They roam the street. They provide a barrier from the oncoming traffic. No driver will hit a cow, a human is fair game.

“The allure of India’s great architectural monuments is acknowledged in the two figures standing before the Jali windows; while India’s supremacy of ocean trade is recognized in the reproduction of textiles found in Cairo, Egypt, in the form of tent hangings and other textile fragments organized on the pillars and the south and east wall.”

Completing the exhibition are a “Pink Elephant” and “Camel,” a pair of large movable wooden sculptures on wheels that harken to the wooden toys found in India and, appropriately, given Weiss’s status as a widely recognized textile artist, a loom loaded with thread.

That larger/smaller contrast, the richness of India and the artists’ personal response to it make “They Gave Us Directions” an absorbing experience and one of the best shows in Lincoln so far this year.

What: "They Gave Us Directions" by Jay Kreimer and Wendy Weiss

Artist-in-residence sends guests out with a story

Tucked away on the main level of the Lincoln Marriott Cornhusker Hotel are the studio, gallery and classroom of the hotel's first artist-in-re…