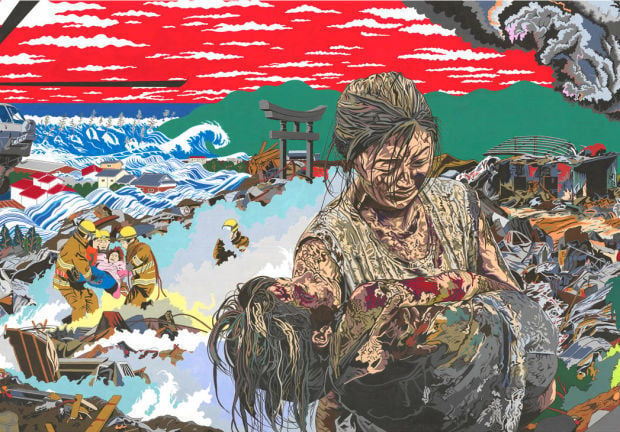 A detail from "Baptism of Concrete Estuary," a 30-foot-long painted scroll by Jave Yoshimoto on view at Iron Tail Gallery 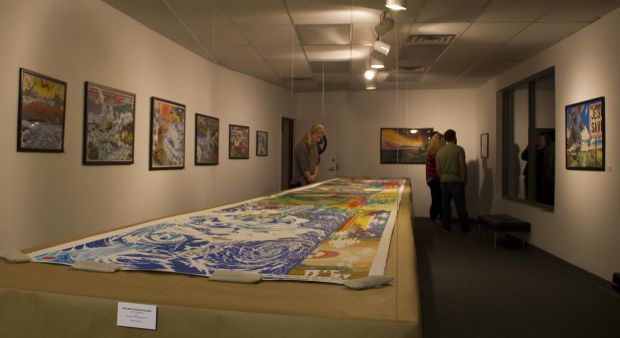 A 30-foot painted scroll lies on a hanging platform in the center of Iron Tail Gallery with more paintings by Jave Yoshimoto on the walls.

A giant scroll lies on a wooden base that hangs from the Iron Tail Gallery ceiling.

On that paper is brightly colored gouache that depicts the aftermath of the tsunami and earthquake that devastated Japan on March 11, 2011.

It’s called “Baptism of Concrete Estuary.” It comes from Jave Yoshimoto,who was born in Japan to Chinese parents, moved to the U.S. at a young age, studied art at, among several schools, the Art Institute of Chicago and now teaches studio art at an Oklahoma college.

“My intention in creating a 30-feet scroll painting was that the audience would be able to have an intimate look at the painting as in traditional Chinese and Japanese scroll, while also feeling overwhelmed by the massiveness of the paper in comparison to the individual,” Yoshimoto writes in his artist’s statement.

“Employing images of the overwhelming power of the Japanese tsunami and earthquake to inspire empathy in the painting’s viewers. I used visual color blocks and large fields to draw in the audience for a closer view, while the finer details of the piece keep the audience fixated and allow them to feel immersed in the painting themselves.”

The scroll, which Yoshimoto worked on from May 2, 2011 to March 24, 2012, is a detail-filled masterpiece with large images, most notably a woman carrying an injured child pulling together highly detailed smaller passages.

Some of those depict the Fukushima nuclear power plant on fire, waves turning into a whirlpool, mudslides, a helicopter rescue, orange-clad rescue workers digging in rubble and marshaling for action and a priest blessing rubble.

I’ve made a couple of trips to Iron Tail to look at “Baptism of Concrete Estuary” and discovered more little images and really felt the scroll’s overall coherence on my second visit -- a unity that is heightened by the Japanese characters on one of end of scroll that translate to hero, courage, heat, build, life and hope.

“Baptism of Concrete Estuary” is the centerpiece of “The Sinking World,” which includes 15 smaller Yoshimoto pieces, most of them from his 2009-2012 “Godzilla Invades” series.

In most of those paintings, the Japanese movie monster trods on American soil or sloshes through a harbor, emerging under the Brooklyn Bridge in “In a New York Minute” and eating a hot dog in the Chicago-themed “Sun Tzu. Chapter 4.”

Godzilla winds up on a county road, surrounded by a center pivot, grain bin and old mailbox in “Dearest Dorothy,” a nod to “The Wizard of Oz,” and gets his kicks on Route 66, stomping another monster in the middle of the highway in “If a Tree Falls.”

Those smaller pieces are as rewarding and revealing as the scroll, with details emerging and informing the images, whether it is the burning old wooden boat in “Vultures of Fragments Past” or the Buddhist query “Where would you possibly go? I am seeking a changeless place” in “Evanescent Encounter,” which depicts an oil sludge cleanup from an offshore plant that is on fire, with Godzilla in the background.

The newest pieces in the show include an untitled work that shows President Obama hurdling an automatic weapon held up by chess pieces with missiles flying over the U.S. Capitol, a piece that conveys political insight with the striking graphic lines that are found throughout Yoshimoto’s work.

There are some unifying aspects in the pieces, including a number with which Yoshimoto identifies himself and his “stamp,” again modeled from old Japanese and Chinese painting -- a “Yoshi” that he cleverly transforms into the Chicago Cubs logo in “Sun Tzu. Chapter 4.”

“The Sinking World,” which is certain to be one of the top and most memorable shows of 2015, is on view at Iron Tail through April 26. At least one additional piece, a large painting about consumerism that’s been transferred to outdoor signage material, will be added to the show in upcoming weeks.

Yoshimoto will do an artist’s talk about his work at the First Friday reception in April. But don’t wait until then to see “Baptism of Concrete Estuary” and the rest of the spectacular show.

What: "The Sinking World" by Jave Yoshimoto

A detail from "Baptism of Concrete Estuary," a 30-foot-long painted scroll by Jave Yoshimoto on view at Iron Tail Gallery

A 30-foot painted scroll lies on a hanging platform in the center of Iron Tail Gallery with more paintings by Jave Yoshimoto on the walls.