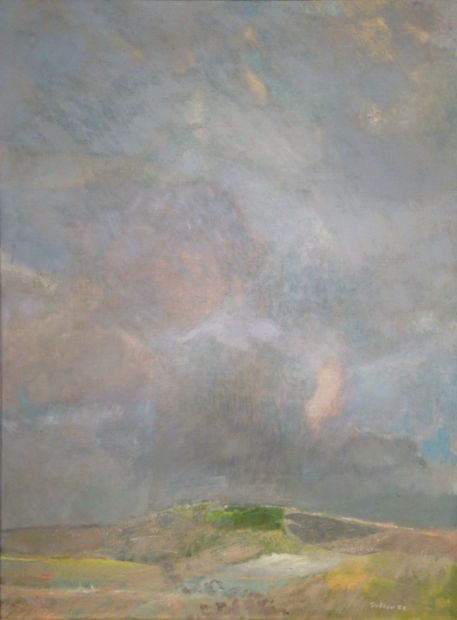 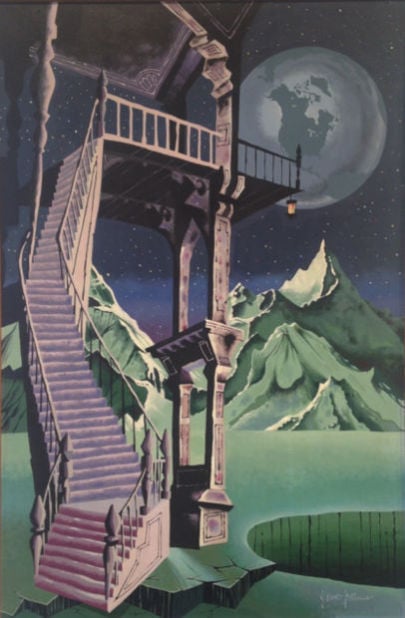 This untitled 1963 painting by the late Omaha artist Kent Bellows was submitted to "Private Made Public" by his nephew Neil Griess. 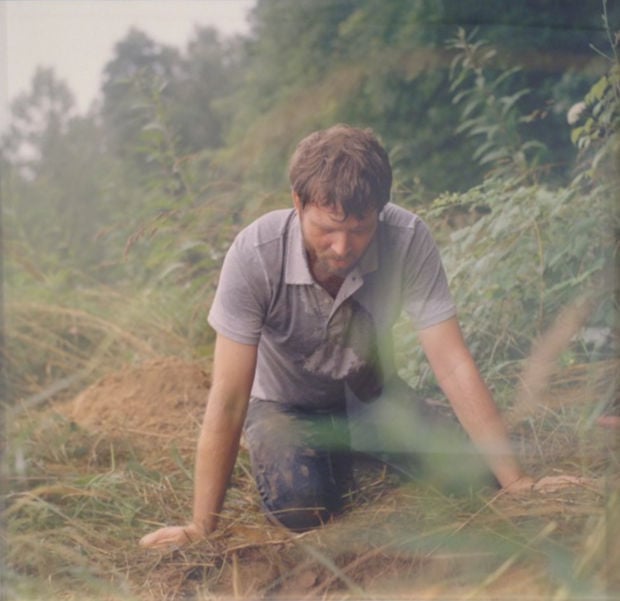 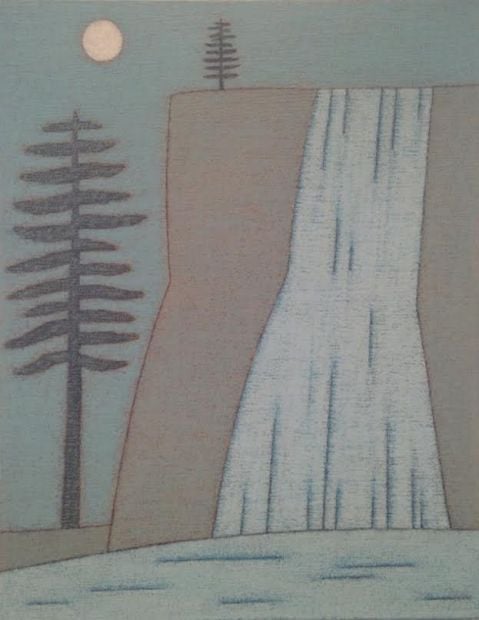 John Dilg's "Into the American West" is one of the eight objects in "Private Made Public."

There are just eight pieces in “Private Made Public,” and none of the prints, photographs, drawings or paintings appears to have much to do with any of the others.

But the pieces come together via the labels that contain a story about the work. Those stories largely are not art historical but of how and why the work’s owner acquired the piece, and what it means to them.

That connection between the collector and the art is the heart of the Elder Gallery exhibition curated by painter Byron Anway.

“I did not invite people who are primarily collectors,” Anway said. “I invited painters and teachers and students. I didn’t curate the show by looking at their collections and choosing objects. I worked with the objects they submitted, that they chose because they meant something to them."

Nishimura, a 2013 UNL M.F.A., is Japanese Canadian, and her black-and-white etching on gampi with wax and thread is based on maps of the area where Japanese Canadian internment camps were located during World War II.

“Beyond its great beauty, this etching resonated with me because I, as a Japanese American, share this history with Nishimura,” Mamiya wrote.

Other pieces have a family connection.

Nebraska Wesleyan University president Fred Ohles chose an early 20th century painting by an unknown Danish artist -- the signature is illegible. A Danish barnyard scene of a horse about to be shod, the painting was purchased by Ohles’ parents in Copenhagen in the 1950s -- connecting him to the work through them and the subject matter, which, he writes, likely was work similar to that done by his European ancestors.

Neil Griess, a UNL painting graduate now in Omaha, contributed another untitled work, a painting of a staircase to nowhere on a barren, mountainous planet with the Earth in the sky above.

The science fiction/comic-book-like image was painted by his uncle Kent Bellows in 1963. The painting by the late Omaha artist hung in Griess’ brother’s bedroom.

“Having works like this around me gave me perspective on where an artist can start. I was 16 when Kent died. The same age he was when he painted this piece.”

The other family story belongs to Ben Moore, the only non-Lincolnite whom Anway selected to contribute to the show.

Moore, a painter and professor at Luther College, chose “Into the American West,” a small 2009 early modernist-style painting of a bluff landscape and pine trees by John Dilg, one of his mentors.

Once offered an opportunity to trade for one of Dilg’s paintings or take cash for his own work, Moore took the cash -- a decision he writes that he long has regretted. His mother bought the painting in the show, giving it to his dad as a gift. After his father’s death, the painting came to Moore, a lasting reminder of both father and mentor.

For artists who contributed to the exhibition, the objects are linked to their careers and friendships with other artists.

Keith Jacobshagen’s choice for the show is Robert Sudlow’s “Rainstorm,” a large landscape from the Kansas painter, whose work Jacobshagen first encountered as a high school student in 1959 and who, six years later, became his mentor when Jacobshagen did his M.F.A. studies at the University of Kansas.

“Painting ‘plein air’ together fostered a friendship that lasted 30 years and changed my life’s trajectory," Jacobshagen wrote. "Due to his influence, I became a landscape painter and college professor.”

Nebraska Wesleyan’s David Gracie, a painter, chose a large-scale photograph of a man kneeling on the ground by Kelly Kaczynski “People Digging Holes (Jacob looking),” a piece he acquired by trading one of his best paintings.

“The work you see here represents a friendship made, a contract between two artists detailing how we support each other’s life work," Gracie wrote. "I am not sure what could be more gratifying than that.”

That kind of trade is common among artists. What isn’t as common is UNL painter Aaron Holz’s acquisition of “Kris,” a graphite drawing by John Sonsini, a Los Angeles portrait painter. “Kris,” a drawing of a young man Sonsini met outside Labor Ready, is a preparatory study for a large painting Sonsini did while an artist in residence at UNL. He gave the drawing to Holz as a token of their friendship.

The final piece in the show is a photograph of “Gaston Lachaise” from Tom Bolin, a UNL undergrad who, Anway says, “has a tremendous collection.” It’s a documentary-style image of a famous artist from 1930, something that would connect with an artist/collector.

While there aren’t many objects, “Public Made Private” held visitors for up to 45 minutes, a rarity in a time when people usually look at an object for five seconds or less.

“it slows people down,” Anway said. “People are looking at the work. They look at the work, read the narrative and go back to the work and have a different experience.”

The smartly imagined, strongly curated and unusually captivating “Private Made Public” is on view at Elder Gallery in Nebraska Wesleyan’s Rogers Center for Fine Arts through Feb. 22.

What: "Private Made Public"

This untitled 1963 painting by the late Omaha artist Kent Bellows was submitted to "Private Made Public" by his nephew Neil Griess.

John Dilg's "Into the American West" is one of the eight objects in "Private Made Public."