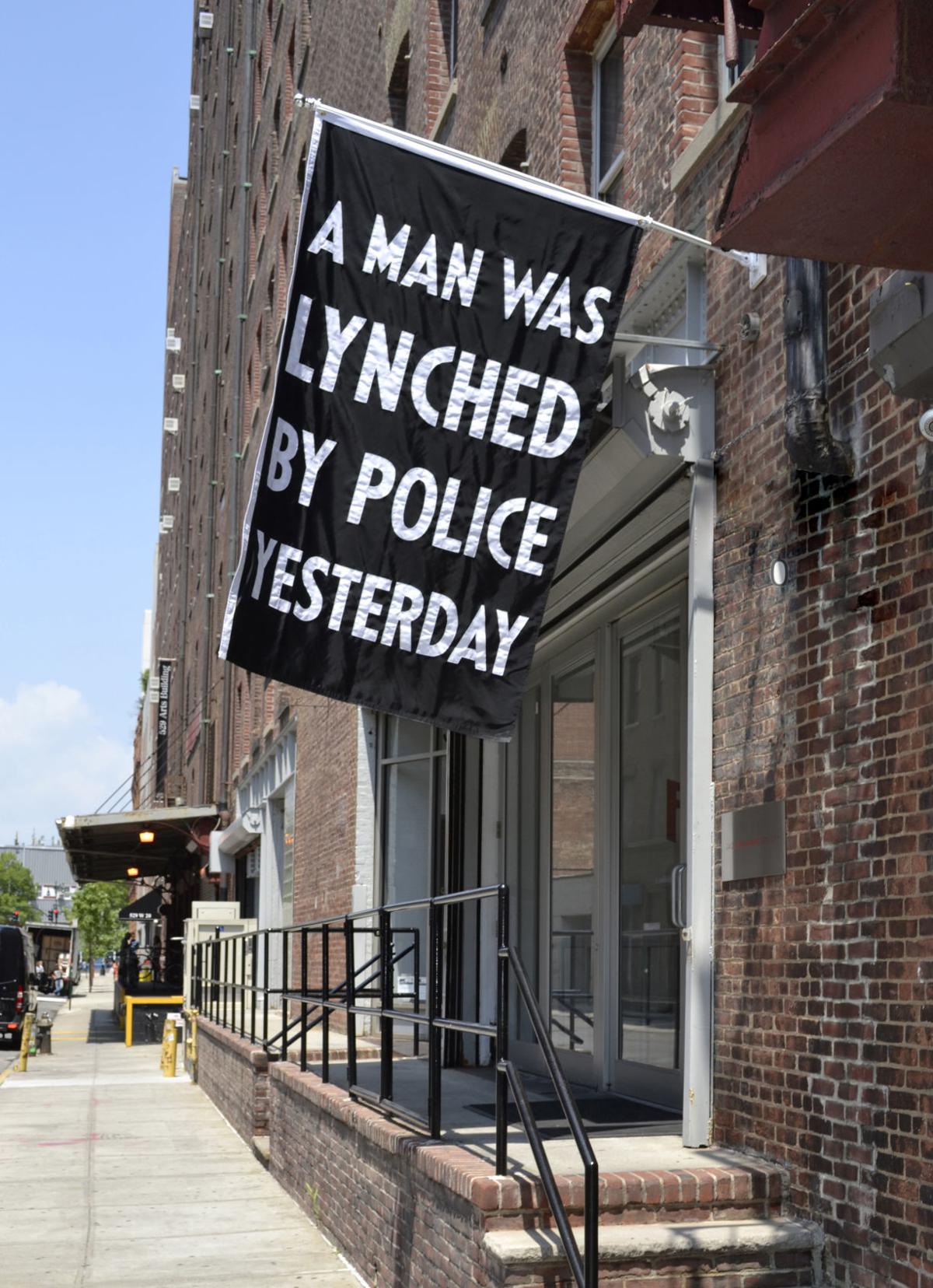 This Dread Scott-created  banner, based on NAACP banner "A man was lynched yesterday" is seen installed at the Jack Shainman Gallery in New York. It is now the opening piece of "I'm Afraid of Americans," the Fiendish Plots exhibition by Scott and his wife Jenny Polak. 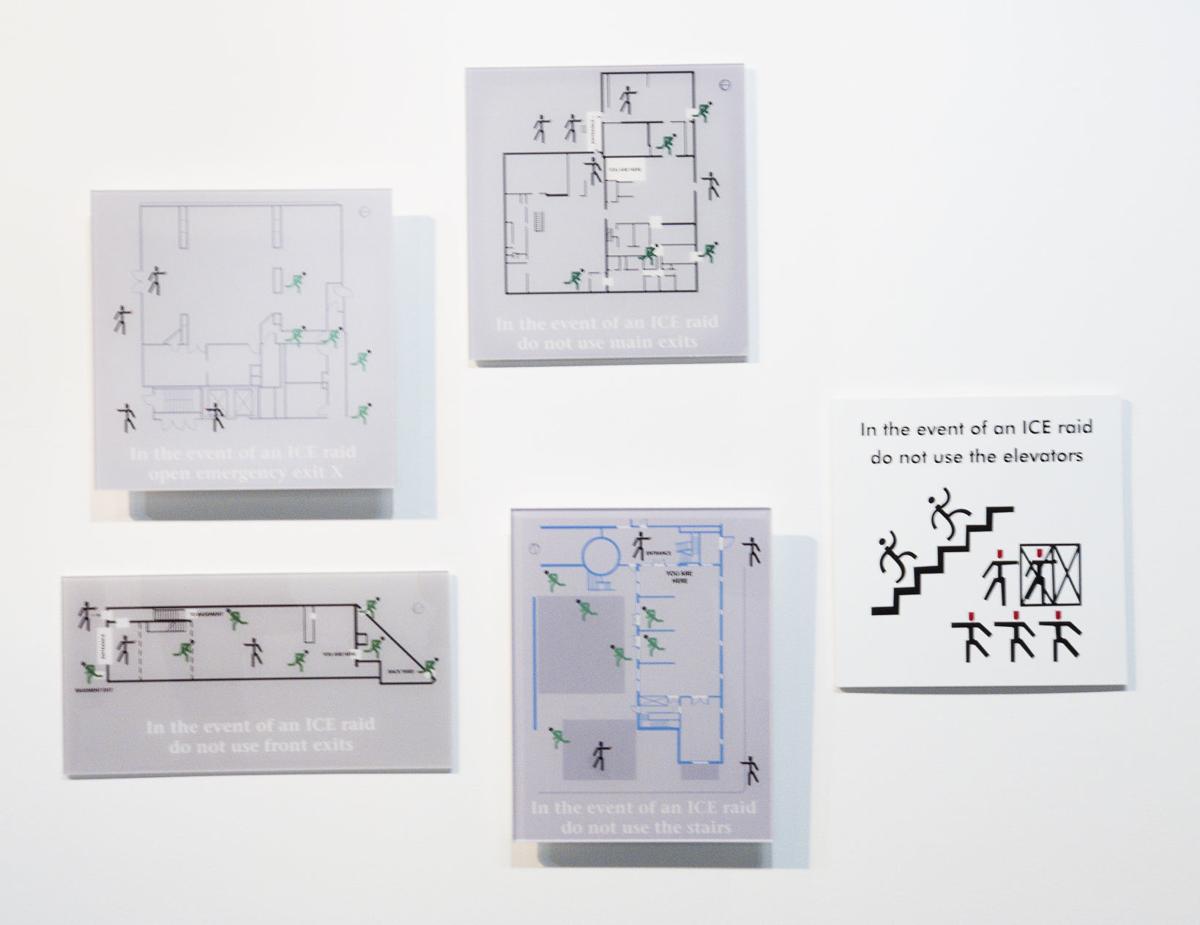 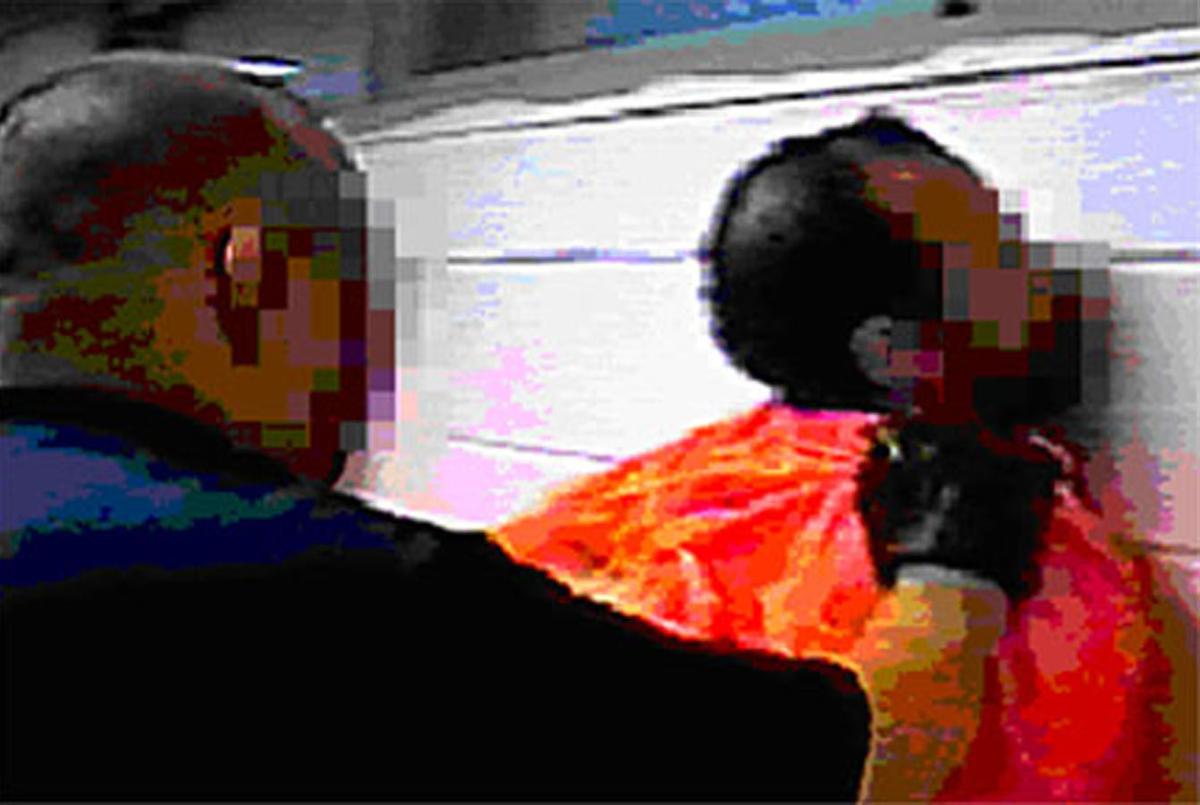 A scene from "Welcome to America," an audio/video piece by Dread Scott and Jenny Polak that was on view in their Fiendish Plots exhibition, "I'm Afraid of Americans." 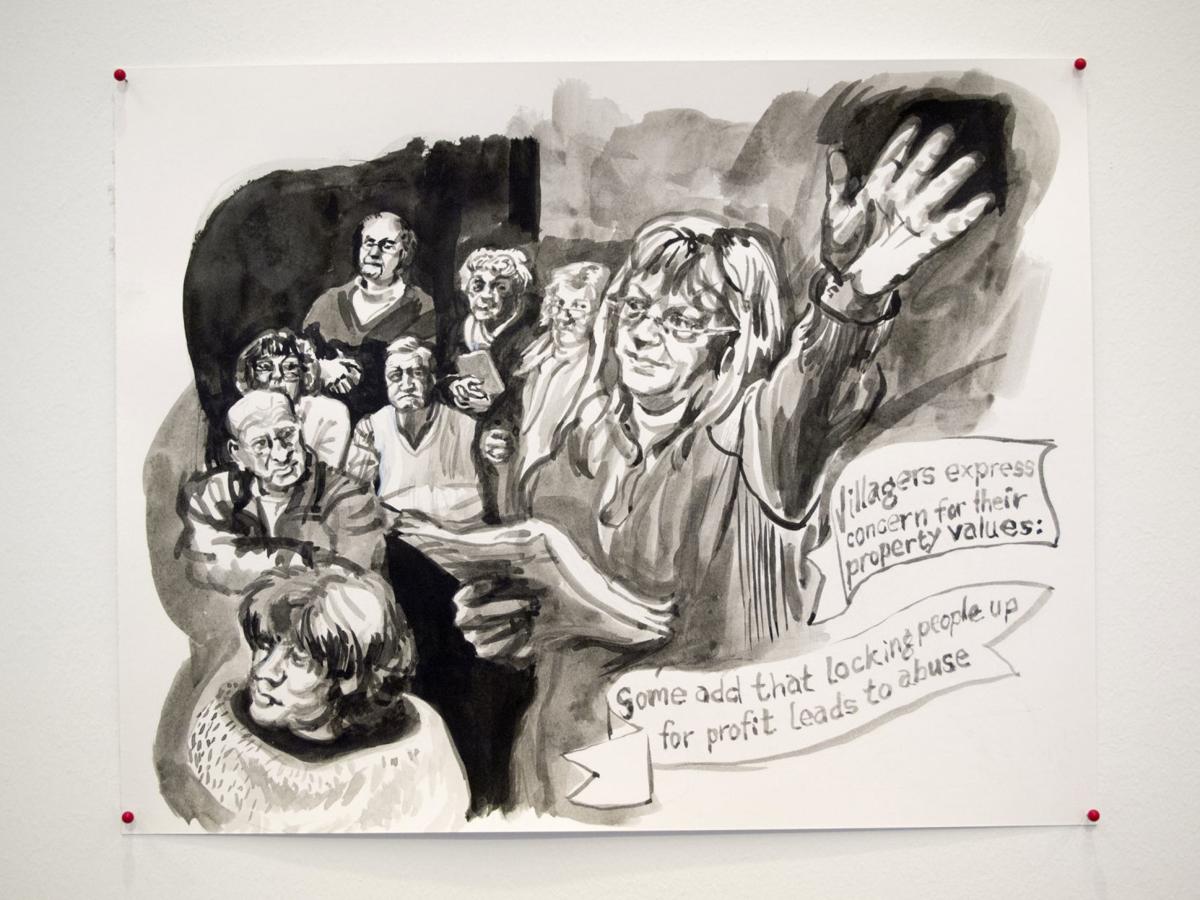 This ink drawing by Jenny Polak is from a project commemorating the alliance of citizens and non-citizens who successfully fought to block the building of a new private detention center by Corrections Corporation of America in Crete, Ill.

“A MAN WAS LYNCHED BY POLICE YESTERDAY” stitched in white letters on a large black banner is the first thing you see on entering Fiendish Plots -- the introductory piece of “I’m Afraid of Americans,” a timely, provocative exhibition from Dread Scott and Jenny Polak.

Creating individually and collaboratively in media from graphic art to video and computer imagery, the New York artists confront social and political issues in work that, as illustrated by the banner, breaks through the barrier between life and art.

The banner, which Scott based on NAACP banners erected in the 1920s and '30s each time there was a lynching, conveys a powerful message -- that blacks are more likely to be killed by police today than they were to have been lynched decades ago, he said during a walk through of the show. The banner's been carried in New York City demonstrations following the police killing of Alton Sterling, an unarmed black man in Baton Rouge, Louisiana, and has been a part of the Whitney Museum of American Art's collection.

Similarly, Polak’s “ICE Escape” series is made up of protest pieces that function in specific spaces but also work as art.

They’re floor plans of some of the spaces where Polak’s work has been shown over that decade -- galleries, libraries, etc. -- designed to look like standard fire escape instructions. The text, however, reads, to pick one example: “In the event of an ICE raid, do not use the front exits.”

In many ways, the exhibition’s pivotal piece contains its most familiar imagery -- television footage of one of the World Trade Center being hit by an airliner on Sept. 11, 2001. Recorded off the only New York City TV station still broadcasting -- the others had their towers on the first WTC building hit by the planes -- “Perpetual 9/11” sets a line of demarcation, the world before and after 9/11.

That sets the stage for “Welcome to America,” a collaborative work from the couple who've been married for 25 years.

It utilizes distorted videotaped surveillance camera footage of immigrants being roughed up in NYC’s Metropolitan Detention Center in 2004 with a recording of a child reciting the Pledge of Allegiance -- a combination that creates an unsettling clash between innocence, unquestioned patriotism and racist xenophobia.

A series of Scott signs -- “Redistribute Wealth” made to resemble vintage music posters; the cutout “By Reading This You Agree To Overthrow Dictators,” created after the election of Donald Trump in 2016; and the laser cut acetate “Conspiring To Cut Off The King’s Head,” which contains the only drawing he has ever exhibited, a tiny crown -- all potently convey their messages.

So do Polak’s pieces on for-profit prisons -- a series of ink drawings depicting the citizens of Crete, Illinois, standing up to the city’s mayor and planning board to stop the construction of a for-pay jail, and a number of small porcelain boxes covered with sepia imagery depicting those protesting a prison planned for a small town near Gary, Indiana.

That activism, Polak’s pieces imply, is the only way for everyday people to have an impact on social and political issues.

Her final work, “Design for the Alien Within,” is a computer piece from 2006, in which she created a imaginary line of functional furniture a la IKEA. But rolling the mouse over some of the larger pieces finds space for hiding illegal aliens and, in some cases, the aliens themselves.

The other collaborative piece, “Passes,” is a work-in-progress begun in France, where the couple had a residency last summer.

Now made up of computer-printed images of photographs and documents, the piece is an examination of African immigration and the slave trade in France -- with passport documents and registries of free and slave Africans contrasting with images of Benin and Marsailles -- all pulled from archives.

“We’re just processing this,” Polak said “This is a lot of stuff, that, without thinking it through, is inscrutable.”

But even in process, “Passes” drives home its point of the historical and international origins of the racial discrimination and an oppression of immigrants that is being confronted today, not just in the U.S., but Europe and the Middle East.

“I'm Afraid of Americans,” smartly curated by Risa Puleo, will be on view at Fiendish Plots through March 3. It shouldn’t be missed. It's very likely to be the most important -- in timeliness and message -- exhibition in Lincoln in 2018.

What: "I'm Afraid of Americans" by Jenny Polak and Dread Scott

Hours: 1 p.m. to 4 p.m. Saturday and Sunday and by appointment

Herman Cornejo was on the phone Wednesday, putting off his lunch to talk about the American Ballet Theatre’s upcoming performances at the Lied…

Nonprofit art, theater and entertainment have a $99 million a year impact in Lincoln, based on a study by Americans for the Arts, a national n…

To create the series of works that became “The Disaster Paintings,” Donald Sultan took tar, house paint and images from newspaper photographs,…

This Dread Scott-created  banner, based on NAACP banner "A man was lynched yesterday" is seen installed at the Jack Shainman Gallery in New York. It is now the opening piece of "I'm Afraid of Americans," the Fiendish Plots exhibition by Scott and his wife Jenny Polak.

A scene from "Welcome to America," an audio/video piece by Dread Scott and Jenny Polak that was on view in their Fiendish Plots exhibition, "I'm Afraid of Americans."

This ink drawing by Jenny Polak is from a project commemorating the alliance of citizens and non-citizens who successfully fought to block the building of a new private detention center by Corrections Corporation of America in Crete, Ill.