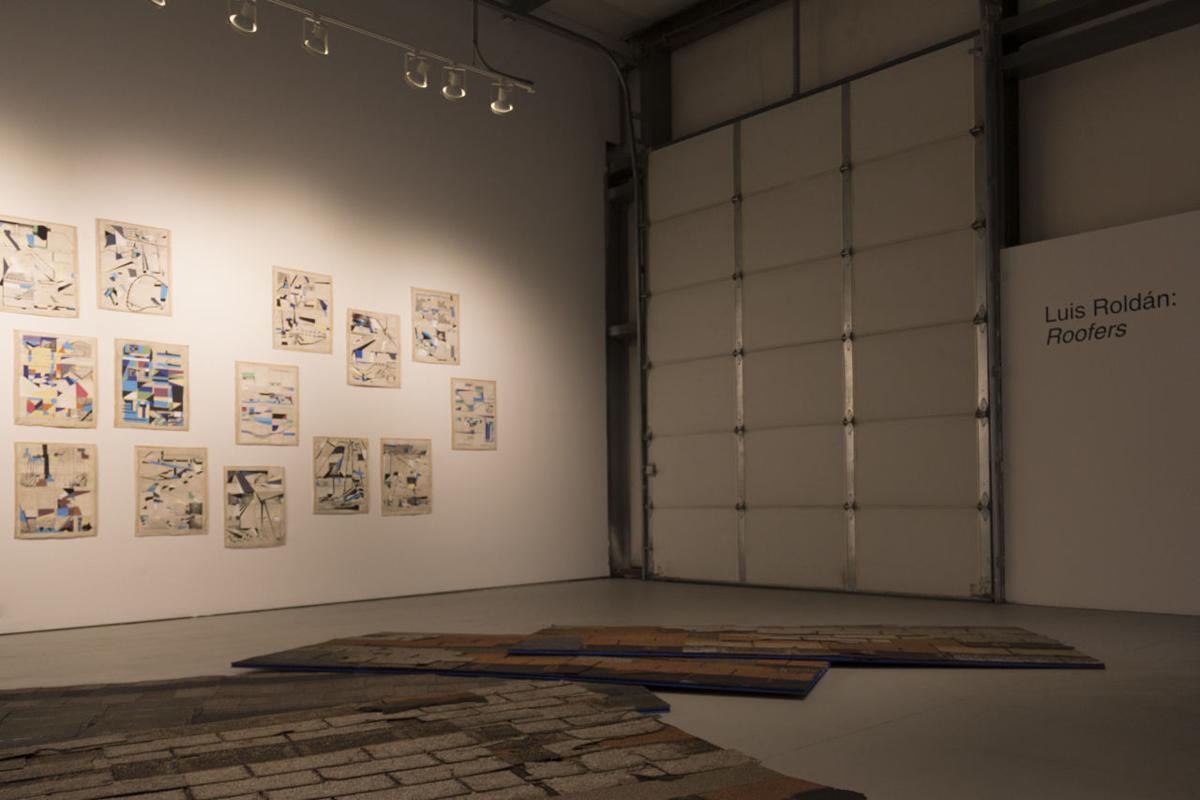 An installation view of Luis Roldan's "Roofers" at Fiendish Plots 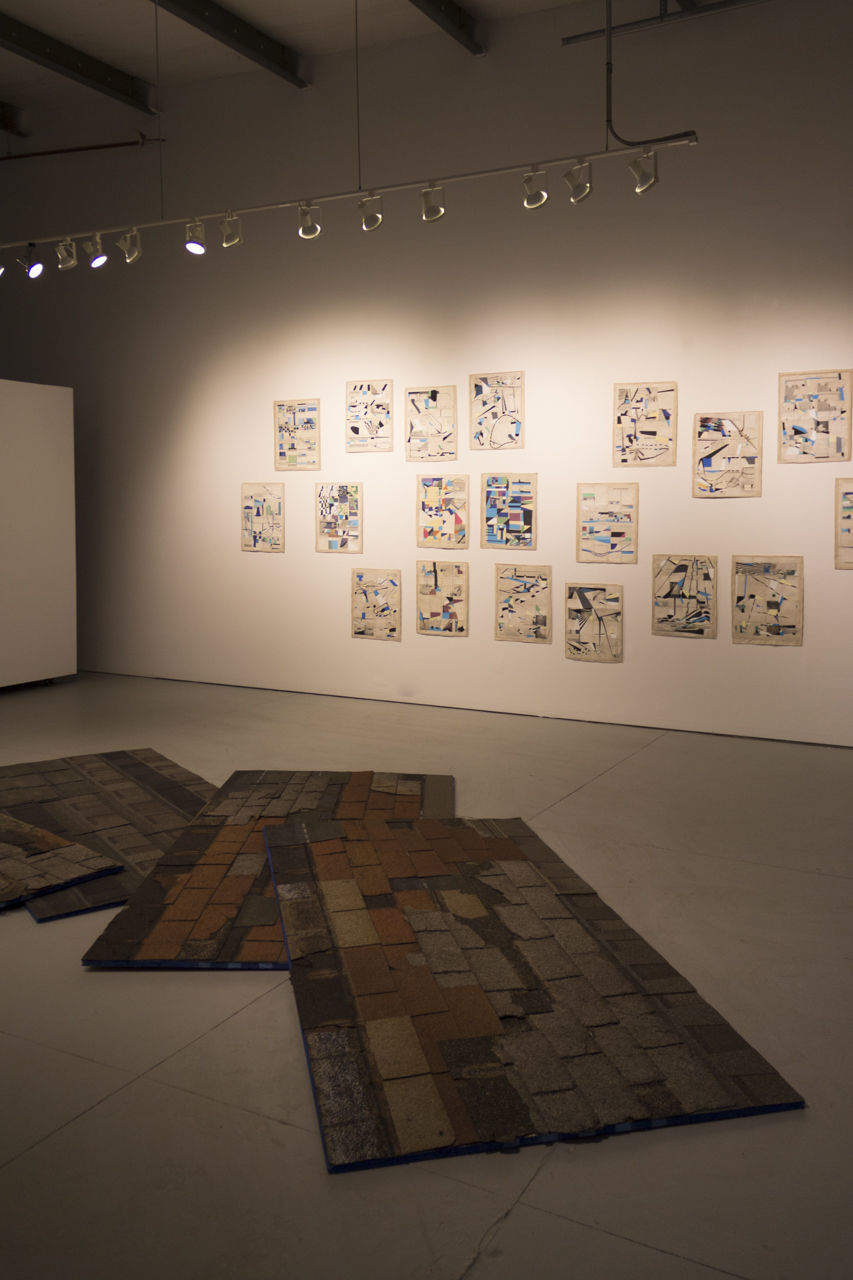 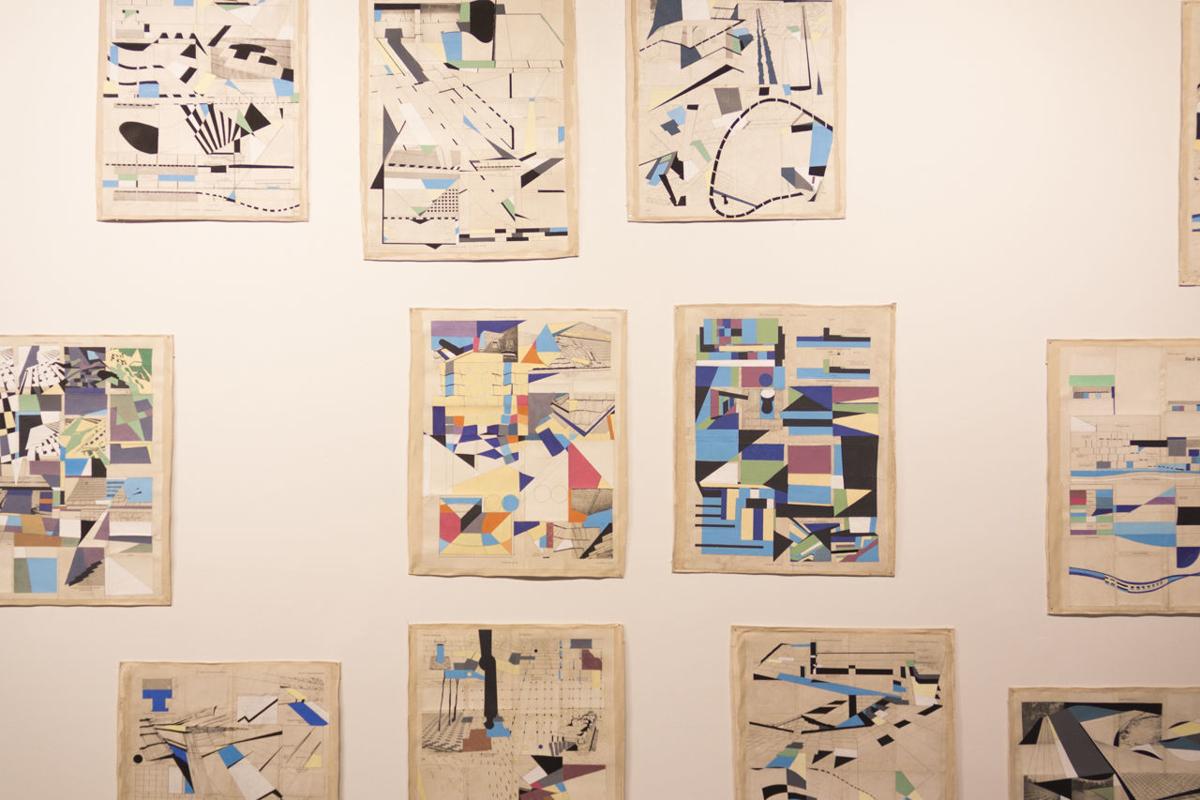 Four slabs of what appears to be a shingle-covered roof lay on the floor at Fiendish Plots. On a wall hang 19 collages covered with squares, triangles, stripes and other geometric elements.

The shingled slabs and collage, it initially appears, have nothing to do with each other. But, on closer examination, they’re closely connected, revealing works of art.

They come from internationally acclaimed artist Luis Roldan -- and their connection is found in the exhibition title: “Roofers.”

Roldan, who has shown work in the prestigious Venice Biennale, is interested in detritus and transforms discarded and lost objects into art works that address social issues, like housing, architectural planning, suburbia and, in the construction of “Roofers,” immigration.

The latter comes from Roldan’s status as a traveler, who lives in his native Bogota, Colombia, and New York City and does shows throughout South America and the United States. So, for the Fiendish Plots exhibition, Roldan brought work that would fit into a suitcase -- the collages -- and constructed the shingle pieces in the gallery.

The raw material for those pieces was shingles and other material that had been ripped from roofs by a local construction company that dropped off what would have gone into a dumpster at the west Lincoln gallery that also serves as the studio for artists Nancy Friedemann Sanchez and Charlie Friedman.

Roldan then arranged the shingles and roofing material on the large pieces of plywood, not in the carefully overlapped manner of a roof, but through texture and design -- a technique that leaves some material hanging over the edges of the boards, reveals colors and patterns and challenges the viewer to aesthetically view the everyday objects -- altering their function from construction to art.

The shingles easily fit into the “Roofers” title. The connection with collages is less obvious, becoming clear only on close examination of the work.

Roldan found an old, oversized book, “The Roofers Handbook,” and used its pages as the foundation for the collages that explore graphic design amidst sentences and page headings like “GAF Roofing Material” (whatever that is).

The collages, with their geometric elements and designs that, in places, appear to be overhead views of buildings and the surrounding area, then become an examination of architecture and construction that is also embodied in the shingled work.

There is, however, a tension that comes from the placement of the two sets of work -- the physicality of the shingled work pushing and pulling against the flat, two-dimensional collages -- that comes out of the same gap between design and construction of every building.

The suburban commentary isn’t as immediately accessible -- until one considers the quote from Lewis Mumford, the most important architectural critic of the 20th century, who observed the development of the suburbs after World War II.

“In the suburb, one might live and die without marring the image of an innocent world, except when some shadow of evil fell over a column in the newspaper,” Mumford wrote. “Thus the suburb served as an asylum for the preservation of illusion.”

“Roofers,” if nothing else, destroys that illusion, by tearing apart the home that represents the perfect domesticity of the suburb and forcing at its elements and what is discarded and destroyed to both construct and maintain that artificially safe and innocent world.

What: "Roofers" by Luis Roldan

A battered old box spring affixed to the wall, slat side up, bids visitors to Fiendish Plots' exhibition space “welcome.”

An installation view of Luis Roldan's "Roofers" at Fiendish Plots