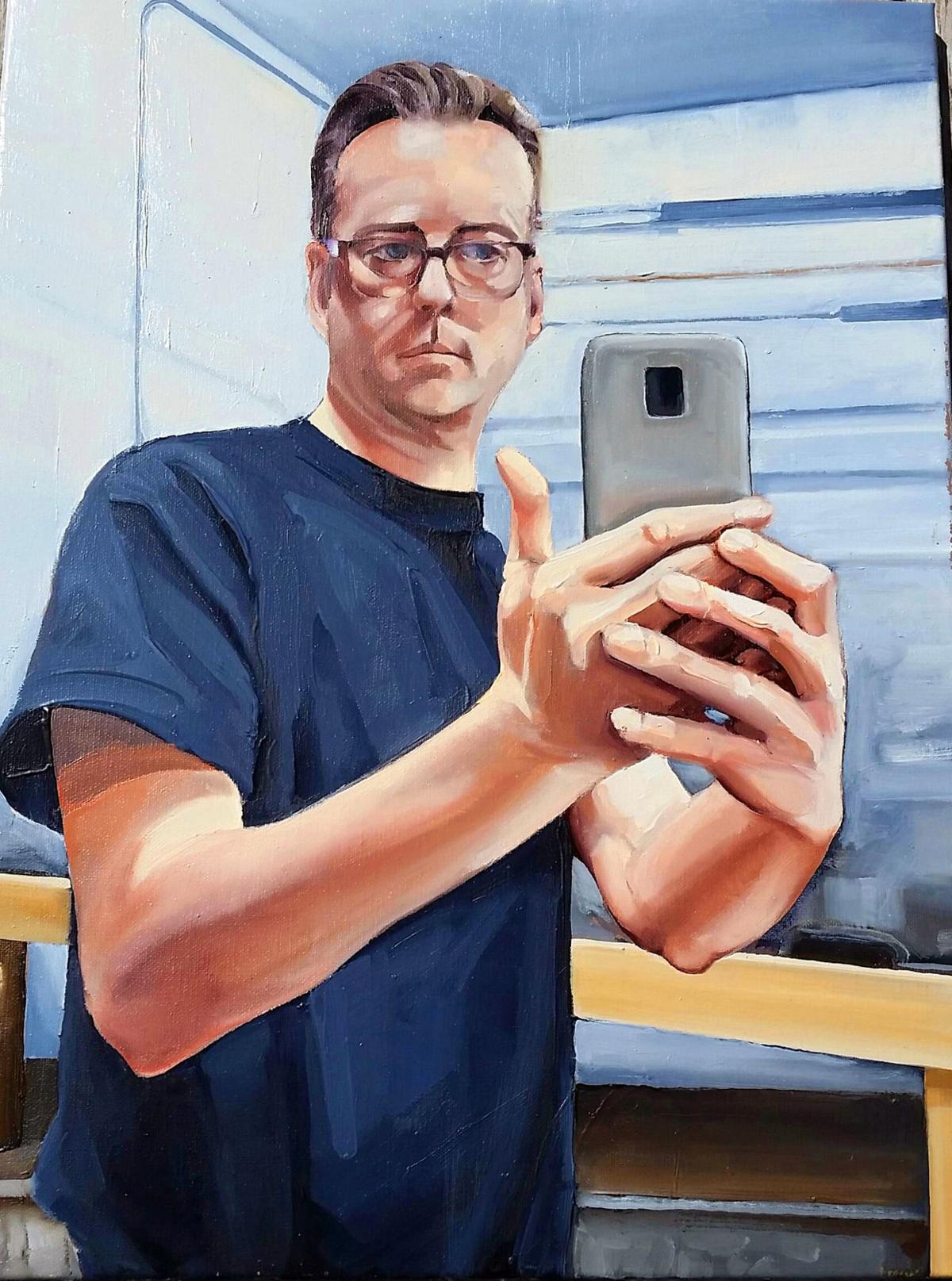 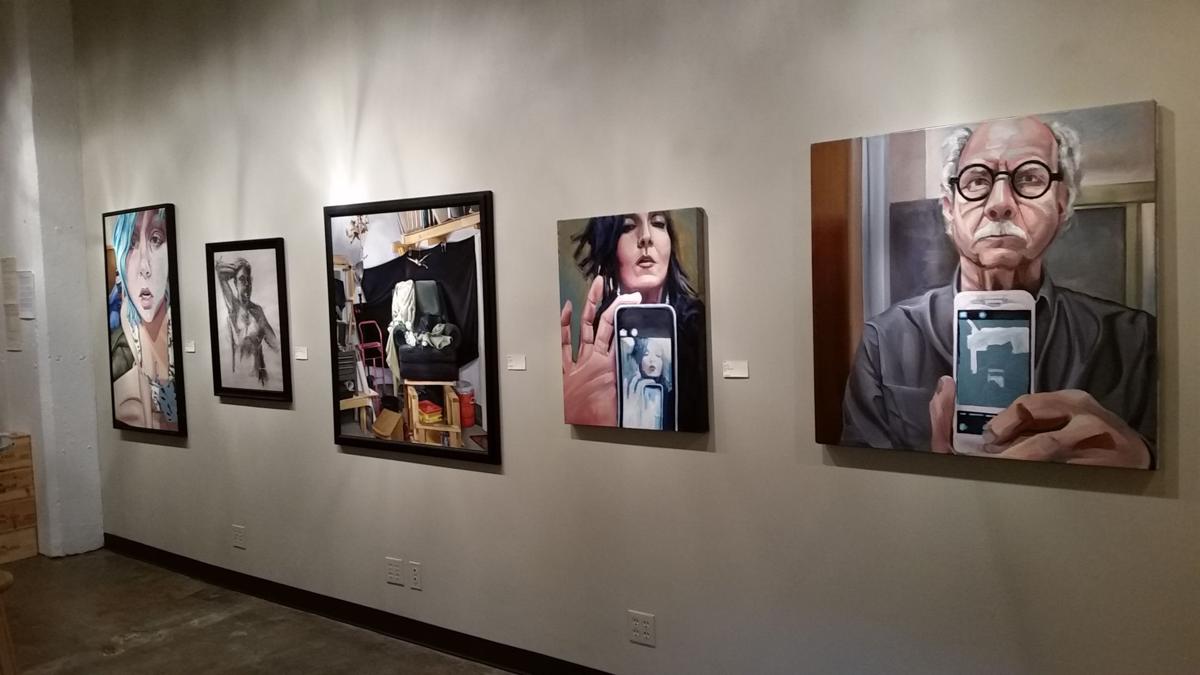 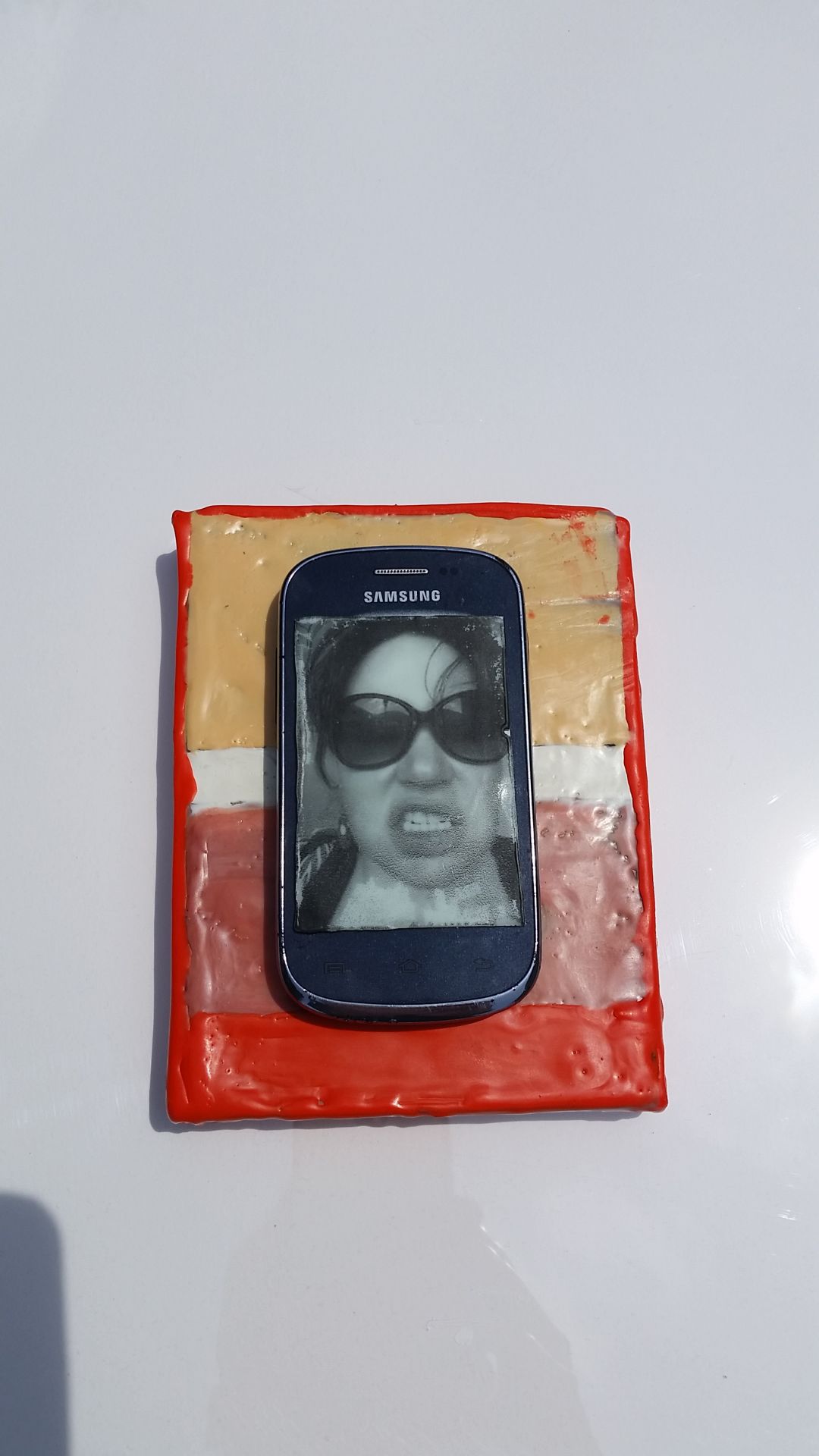 "Fierce Pam" is a selfie done in encaustic on a phone screen. 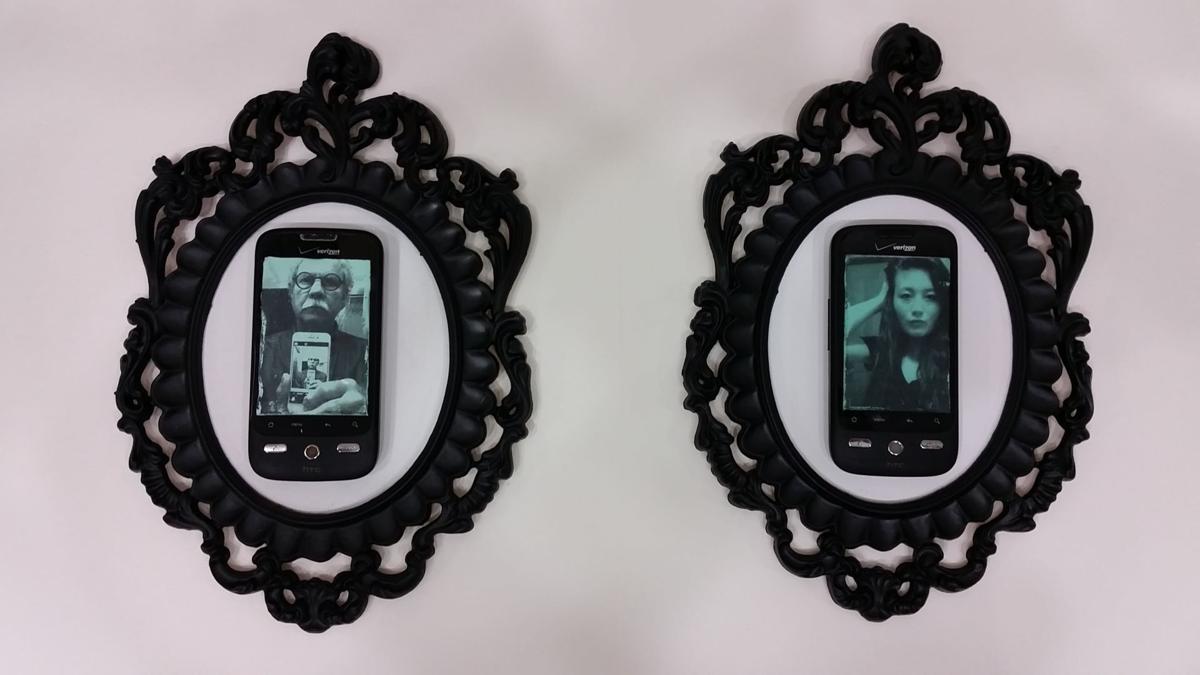 For Tj Templeton, the selfie presented a challenge.

Not only have the self-snapped pictures made a direct assault on the self portraiture that has been a key element in Templeton’s development as a painter, they’ve significantly diminished the form, taking it from the realm of art into the mundane.

So how did Templeton respond to the now-ubiquitous selfies?

By turning them back into art, reproducing them on varying surfaces at varying scales, sometimes in color and sometimes black-and-white.

Those paintings are found in “Narcissus Smirked: A snapshot of our selfie culture,” his exhibition on view through Aug. 29 at Gallery 105.

Appropriately the surfaces include the screens of old phones onto which Templeton has taken a selfie and painted it in encaustic with carbon and wood, a technique he developed to vividly reproduce the selfie images he gathered from friends and local notables.

I know a few of the people depicted on the phones and Templeton’s accurate in reproducing their look, while, obviously, altering the images as they moved from medium to medium. Such is the nature of art -- as opposed to the constancy of the selfie, which definitely is not.

That, however, doesn’t mean that Templeton holds the selfie in low regard.

“Considering that an arts career is essentially showing as many people as possible ‘Hey, look at what I made!,’ I have no problem at all with more people joining me in sharing the fruits of their own narcissism,” he writes in his artist’s statement.

That said, viewed on the phones, the black-and-white images challenge the full-color “perfect” selfie that we are accustomed to seeing. And there’s an “Anti-Selfie” of a person’s back that raises a challenge of its own, questioning the nature of the narcissist,

Templeton, however, isn’t content just to impressively redo the selfies on the phones. He connects those images to the past in a mixed media assemblages, one titled “Nero Selfied While Rome Burned."

A second, “An Act of Violence,” uses a photograph of a girl taken by Lewis Hine, the social reformer who documented child labor in the early 20th century, as its subject matter.

In doing so, Templeton addresses the photographic portrait against flattering, self-selected selfie. If the selfie taker doesn’t like the image, it will never be seen. In a portrait, that choice is made by the artist and flattery is rarely the criteria for selection.

Templeton then renders some of the selfies as large oil paintings, the subject holding the camera with the image toward the viewer. That method creates repeating images of “Sas,” singer Sas Liska and photographer Roger Bruhn in “Meta Selfie” that both deconstruct the selfie and demonstrate the power of scale and of artistic interpretation of the photographic image.

Of course, Templeton had to include some self-portraits in the show. One is a traditional, painterly view of the artist in his studio. There's a triptych of his face “Skinny Me, Fat Me, Old Me,” a painting of his face presented horizontally, as on a phone screen, overlaid with a pattern and one titled “Studio Selfie.”

That piece, one of the strongest works in the exhibition, depicts Templeton taking a selfie, the back of the phone to the viewer rather than the multiplied forward views of his other subjects.

So the selfie hasn’t won out after all. “Studio Selfie” is art about the artist and the selfie that’s never going to show up on a phone or social media.

Unless, that is, a visitor to Gallery 105 snaps a picture and posts it somewhere. But unless Templeton did the posting, it won't be a selfie.

What: "Narcissus Smirked: A snapshot of our selfie culture" by Tj Templeton

"Fierce Pam" is a selfie done in encaustic on a phone screen.