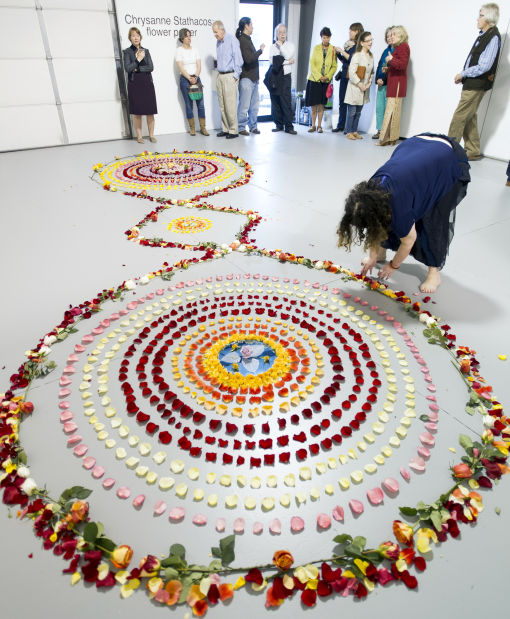 Artist Chrysanne Stathacos of New York puts the finishing touches on a double helix rose mandala for her Flower Power installation Saturday at Fiendish Plots exhibition space. The mandala is shown in conjunction with pictures, tapestries and poems to enhance the experience. 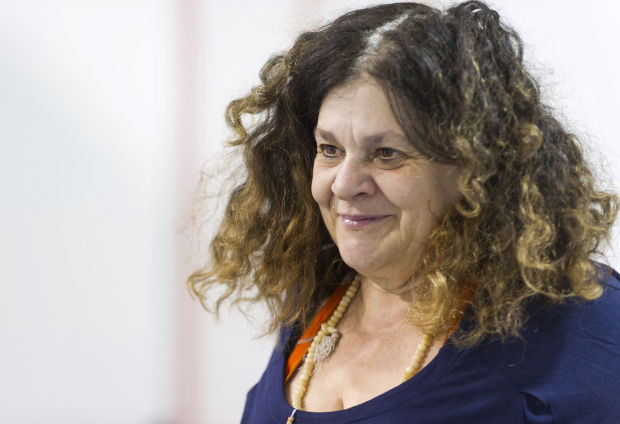 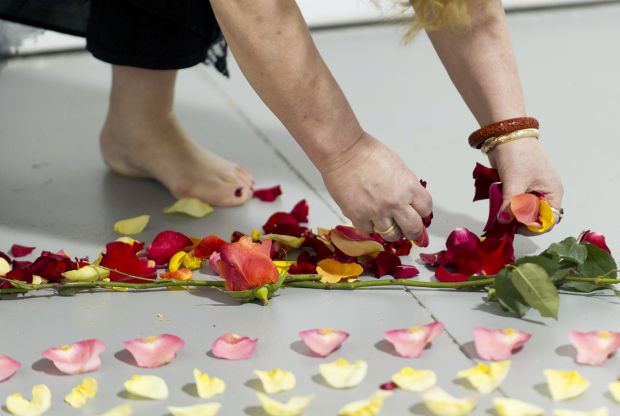 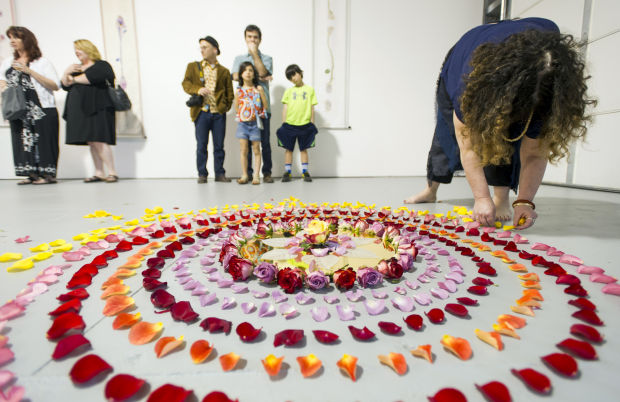 Artist Chrysanne Stathacos works on a double helix rose mandala for her Flower Power installation in front of a small crowd Saturday at Fiendish Plots.

For two hours Saturday, Chrysanne Stathacos bent over and precisely placed rose petals on the Fiendish Plots floor, laying them out in rings of color to create a mandala, a flowers-and-mirrors take on the ancient Hindu and Buddhist symbol of the universe.

Stathacos has made her flower mandalas all over the world, most recently in a major exhibition in the Netherlands, and, in 2006, created “Rose Mandala (of three reflections)” for the Dalai Lama when he took part in a law school conference in Buffalo, N.Y.

Until Saturday, however, Stathacos had never made a double helix — that is a pair of mandalas linked by a “bridge” of whole roses, a piece that touches on DNA and opens up thoughts of mind and body, science and spirituality and, as the petals dry and shrink, decay and impermanence.

Those ideas, particularly the concept that nothing is truly permanent, are key concepts in Buddhism. Stathacos is a Buddhist who studies with Jewel Heart’s Gelek Rimpoche, who visits Lincoln annually and works with and is inspired by Tibetan Buddhist nun Jetsunma Tenzin Palmo.

Mandalas play a large role in Tibetan Buddhism. But Stathacos says her mandalas aren’t designed to copy the meticulously constructed, highly detailed sand paintings made by monks and used in meditation practice.

“I don’t see this as specifically Tibetan,” she said. “They started around the time I went to India and got interested in Buddhism. I’ve always been interested in nature, so it is a natural extension of that.”

Stathacos, who trained as a printmaker, made her first trip to India in the early '90s and has been there 10 times in the last 20 years, visiting Indian artists and galleries and working with Dongyu Gatsal Ling Initiatives, an organization she co-founded to reclaim the lost traditions of Tibetan Buddhist women.

Those trips bring a Hindu element into her mandalas, which always have mirrors at the center. Some, like those in “The Double Helix Rose Mandala,” are small — a foot or so in diameter. For the mandala she made for the Dalai Lama, the fragile blue glass mirror was 4 feet across.

The Fiendish Plots mandala was made from roses Stathacos purchased at Trader Joe's, with each color and ring chosen for aesthetic reasons. Stathacos said she makes her mandalas by herself, largely because, if she had help she’d be moving rose petals placed by others or making them change what they’ve done.

Spending a couple hours bent over making mandalas is stressful, but calming, even when she’s being watched by a couple dozen people as she was Saturday.

“It’s like a yoga practice for me,” Stathacos said while sitting on a cushion on the gallery floor after completing the mandala.

The mandala is one of three parts of Stathacos’ installation. The other two are “Aura Project: Flowers of self,” a half-dozen small pictures that she took with a bio-feedback camera while on her trips to India, and “Poems (of three poets)”, a series of long scrolls with imagery created by inking roses and pressing them onto tea towel linen.

Those pieces continue the floral theme of the installation and in the work of Stathacos, who has been using flowers in her art since the 1980s.

Together, she said, she wants her work to be defined by and about four words — art, healing, nature and compassion, themes that are successfully conveyed in the installation.

“Flower Power” will be on view at Fiendish Plots through May 18. The mandala will be destroyed a few days before the exhibition closes by members of Jewel Heart Nebraska, who will conduct a meditation practice before blowing the petals away.

The Weeknd sets a major new milestone with ‘Blinding Lights’

The Weeknd sets a major new milestone with ‘Blinding Lights’

Kanye West believes God will reconcile him with Kim Kardashian

Kanye West believes God will reconcile him with Kim Kardashian

What: "Flower Power" by Chrysanne Stathacos

Artist Chrysanne Stathacos of New York puts the finishing touches on a double helix rose mandala for her Flower Power installation Saturday at Fiendish Plots exhibition space. The mandala is shown in conjunction with pictures, tapestries and poems to enhance the experience.

Artist Chrysanne Stathacos works on a double helix rose mandala for her Flower Power installation in front of a small crowd Saturday at Fiendish Plots.