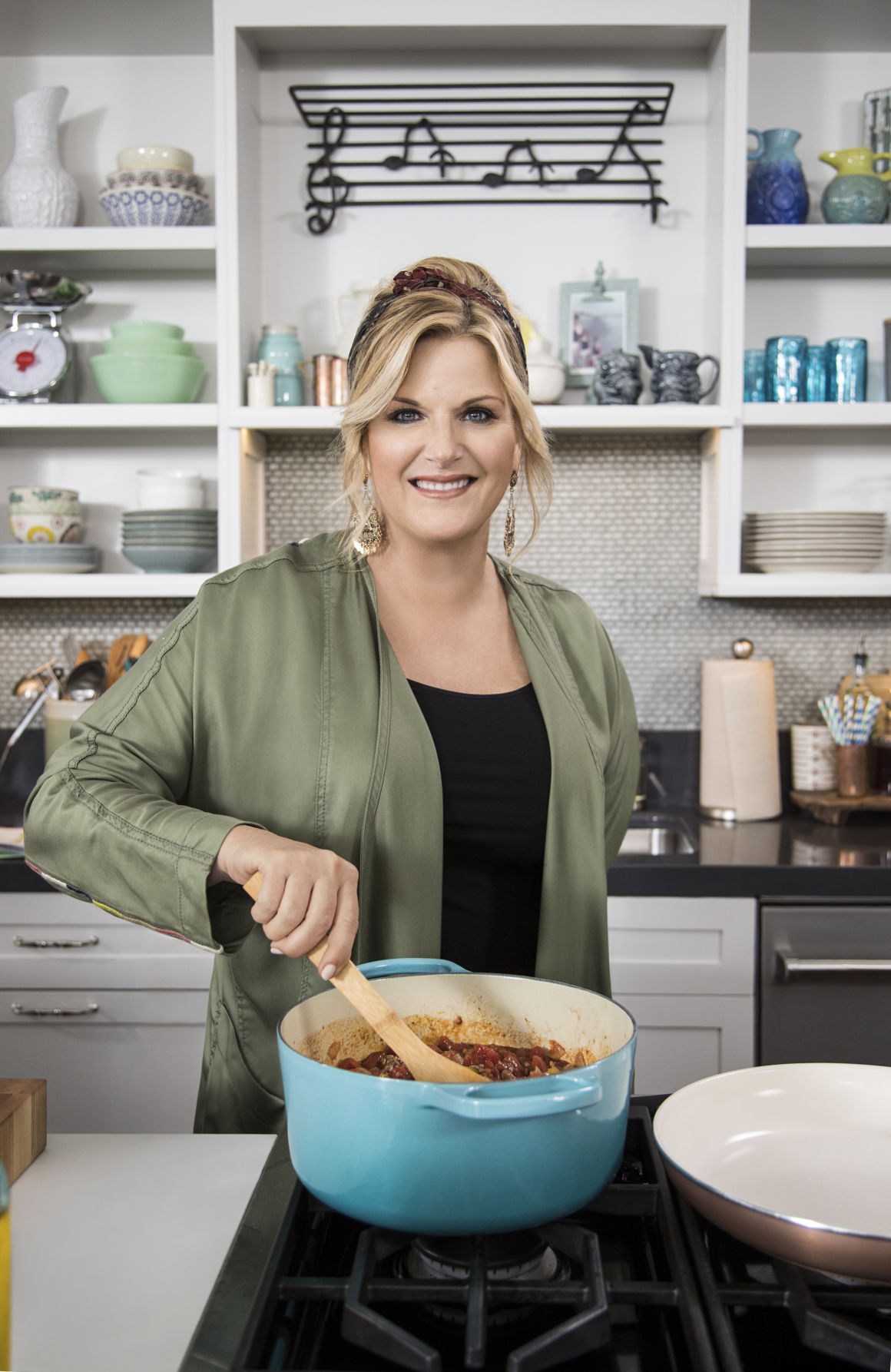 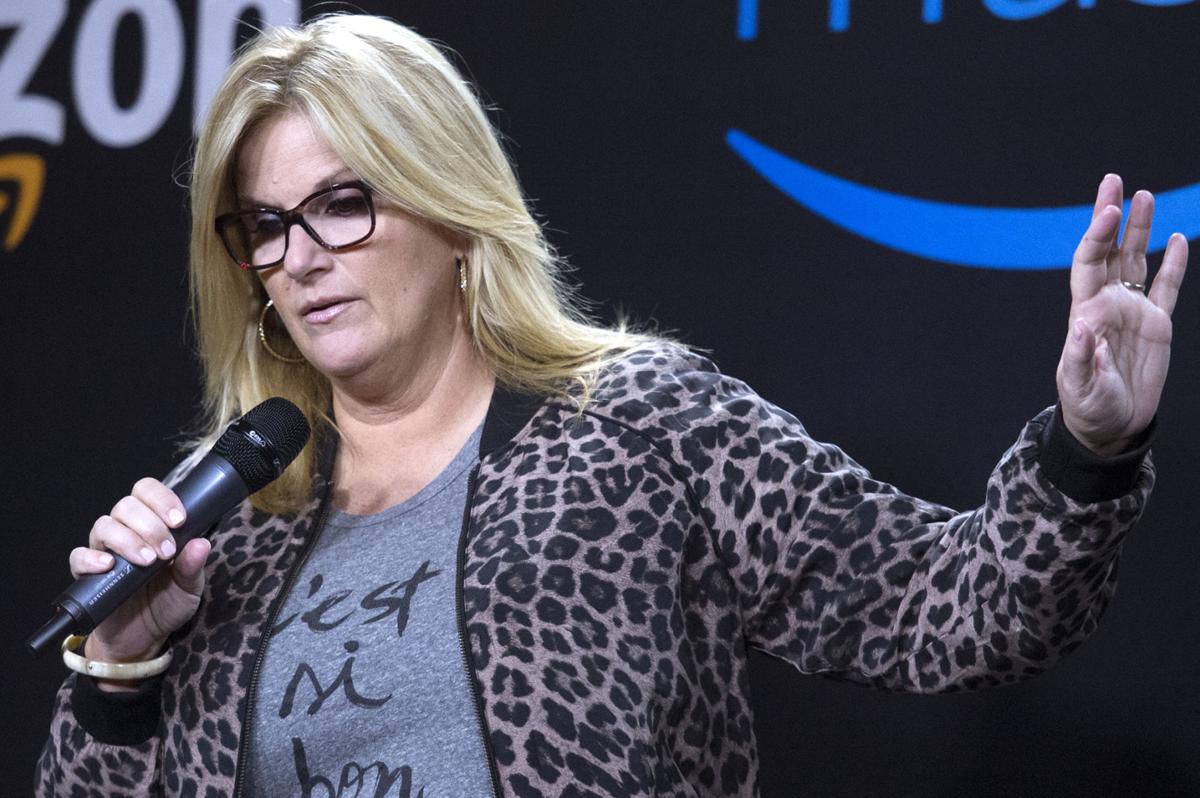 Trisha Yearwood speaks during a press conference Oct. 17 at Pinnacle Bank Arena, where she performed five shows with her husband, Garth Brooks.

Trisha Yearwood had no intention of having a television cooking show when she, her mother and her sister began compiling their family recipes into a book a decade ago.

They were intending to honor her father, Jack, who died in 2005, and preserve the recipes for themselves when they put together “Georgia Cooking in an Oklahoma Kitchen.”

“We did the first cookbook to get all of our recipes out of the shoebox and just in one place that we could have for ourselves,” Yearwood said. “I never dreamed it would be successful and especially a New York Times bestseller, never thought it would lead to another book, a show. So I’m the most surprised person that I have a cooking show. But it came out of something I really enjoy doing.”

The show is “Trisha’s Southern Kitchen." It’s been on Food Network since 2012, winning an Emmy in 2013 as Yearwood has developed a reputation as a good cook.

That wasn’t always the case, she said in an interview before she and her husband Garth Brooks performed at Pinnacle Bank Arena last month.

“My mother was a school teacher and everyday she’d get home at 3:30 and there’d be a home-cooked meal on the table at 6 when my dad got home from work, every single day,” she said.

“I took it for granted as a kid. I really didn’t learn how to cook until I moved away, went to college, missed her cooking, was eating vegetables out of a can, going ‘OK, how do I do this?’ She taught me then, over the phone, how to make things. The first time I was able to make something of hers, that tasted like hers and it wasn’t hard to make, it changed my life.”

Yearwood provides the recipes for most, if not all of the dishes she prepares on “Trisha’s Southern Kitchen.” On the most recent episode, “Trisha’s Misfit Thanksgiving,” she made orange-and-maple glazed turkey with thyme-shallot gravy, slow-cooker acorn squash, roasted chestnut and apple dressing and spice cake with lemon sauce.

During the 30-minute show, she provided tips on how to make each of the dishes — such as starting the turkey at 425 F for 25 minutes before dropping the temperature to 375 to better crisp and brown the bird — and how, by using the slow cooker and other tricks — to get them to come out at the same time.

“My mom was always ‘Simple is best,’” she said. “She grew up on a dairy farm in south Georgia. Here mother was an incredible cook. They didn’t have a lot of money. So you have to figure out how to make things with limited supplies and your exotic spices are salt and pepper. But the taste is there. I’ve had a lot of fancy food and I’m not sure it’s better, it’s just different. My mom was able to, I think, make food taste really good by using just a few simple ingredients.”

Nor did the Thanksgiving dishes require the skills of a trained chef to make — again, by design.

“I love it when somebody says ‘I don’t really cook, but I made your meatloaf and I could make it and it was good," Yearwood said. “That’s good for me. I’m not one of those people who’s ever going to say ‘I’m not going to share the recipe with you.’ I want you to make it.”

“Trisha’s Southern Kitchen” is filmed in the Nashville home that she and Garth Brooks use when they’re not at their homebase in Oklahoma.

While she’s plenty busy with her singing career — she and Brooks just ended the three-year-long world tour that brought them to Lincoln for five shows in three days — Yearwood’s very hands on with the television show.

She comes up with the “creative elements,” deciding what she wants to make and the stories she wants to tell on each episode, then sort of turns things over to her production team.

“I’m pretty controlling,” she said. “I’m a Virgo, so by nature I’m in the middle of everything I do, but I like that. I think it’s important, especially for this show, to maintain its authenticity, for it to really be what I want to do. It’s simple things. We work with this incredible culinary kitchen at Food Network, and they’re great. But they know what they know and they’re all classically trained chefs and I’m not.

So simple things, like the first time I sifted flour on the show they had me doing it patting the bottom of this thing and it’s going to take me two days to sift the flour. I’m like ‘I use a $2 sifter from Walmart that you crank and it’s done in two seconds. Oh, we can do that.’ Simple things like what utensils you’re going to use, how you would do it, what bowl you’re going to put it in."

So is the creativity Yearwood utilizes cooking similar to that she brings to music?

“I think so,” Yearwood said. “When someone eats your meal and rolls their eyes back in their head or they’re like ‘oh my gosh’ then it’s applause. It’s totally self serving, you know. But it’s also a way to be creative. In the way that music makes me happy and relaxes me, cooking relaxes me. It makes me happy. If you made me pick one, I would pick music every time because music feeds my soul and I can’t imagine not doing that. But I like that I get to do both.”

And she intends to continue “Trisha’s Southern Kitchen” for as long as she can, to pay tribute to her parents. Both, she said, were very good cooks.

“Now that both my folks are gone, it really is important for me because it’s a way for me and my sister, who’s on the show a lot, to continue to share their recipes with the world,” she said. “When somebody comes up to me and says ‘I made your dad’s Brunswick stew’ it makes me so happy inside because I feel like it’s my way to keep them alive and other people are making things they made. It makes me so happy.”

Recipes: To get recipes for dishes prepared on the program, go to

First teaser trailer for ‘Lightyear’ with Chris Evans is here

How Ina Garten blew off the Food Network: 'Lose my number'

How Ina Garten blew off the Food Network: 'Lose my number'

If you forget to thaw the turkey or hate the taste of Aunt Ellen's stuffing, don't worry, Thanksgiving isn't ruined.

Country music associations should either retire their entertainer of the year awards or name them after Garth Brooks.

Running to the end: Garth Brooks brings his World Tour to Lincoln after three years

The secret is in the brine.

When I spoke to Hollywood screenwriter Christine Conradt in 2010, she told me she eventually would like to write a Christmas movie.

With 20 concerts drawing some 218,000 people, Pinnacle Bank Arena had a record year in 2017. With those sales anchoring the overall total, Lin…

Trisha Yearwood speaks during a press conference Oct. 17 at Pinnacle Bank Arena, where she performed five shows with her husband, Garth Brooks.